The Asian and African Studies division of the British Library contains the Hebrew and Christian Orient collection. It was here that four Torah mantles were found during the initial assessment of Torah scrolls for the Hebrew Manuscripts Digitisation Project. The project has been generously funded by The Polonsky Foundation and has so far digitised about 1,300 manuscripts from the British Library’s collection. It has enabled hand-written codices, scrolls, and textiles to be freely available online.

What is a Torah mantle?

Torah mantles are the cloth coverings which are used to dress Torah scrolls when they’re not being used. They are constructed in a similar way to a long, gathered skirt with a ‘lid’ at the top which is stitched to what would have been the waistband.

The ‘lid’ incorporates two holes so that the wooden handles, or staves, can protrude, keeping the scroll in position so that a sash can be tied around the mid-point.

It was not uncommon for dresses and other domestic fabrics to be donated to synagogues for the purpose of making mantles like these. On some mantles it’s possible to see previous stitching, needle holes or small patches of material which show how it’s been repurposed. 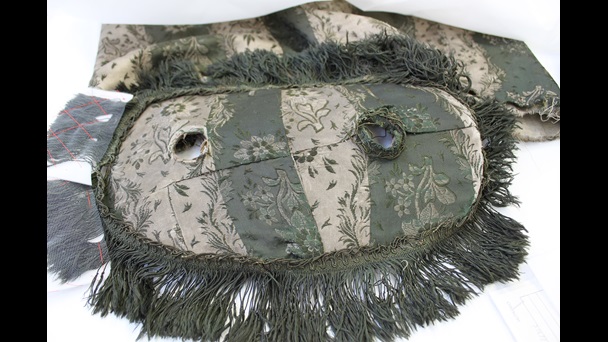 The scope of the project

We found the mantles crushed into the boxes which contained the scrolls. All were in very poor condition; in varying states of disrepair and in need of interventive conservation before digitisation. We wrote conservation reports for each mantle which included an estimate for the time and materials needed to complete the task. Funding was kindly donated to the British Library and so three months of intensive conservation treatment began.

This article focuses on the conservation of Or 13027/2.

This small mantle is made from brightly coloured silk brocade.[1] The silk at the bottom left and right was very badly degraded, extremely fragmentary and exceptionally brittle. 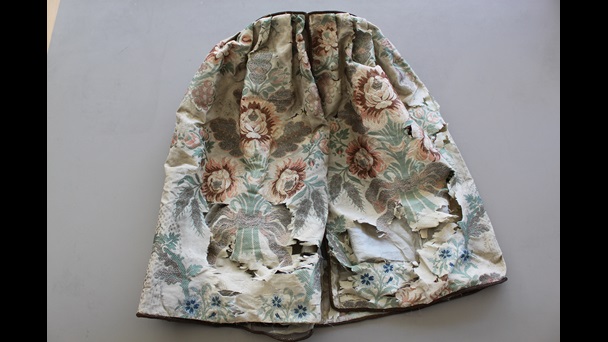 It was essential to stabilise the fragmentary silk so that the object could be handled during the treatment. Conservation grade nylon net was dyed to match the cream silk and a pre-tested adhesive was applied to one side. The creases were removed from the silk using the controlled application of moisture and then by pressing the silk under glass weights.

Once the silk was flat, pieced back together and under glass, a template of the textile design was taken so that the adhesive-backed net could be cut to fit the pattern. We had to partially remove the metal cord edging and some stitching from the centre front, around the ‘top’ and along the hem, in order to successfully apply the net. 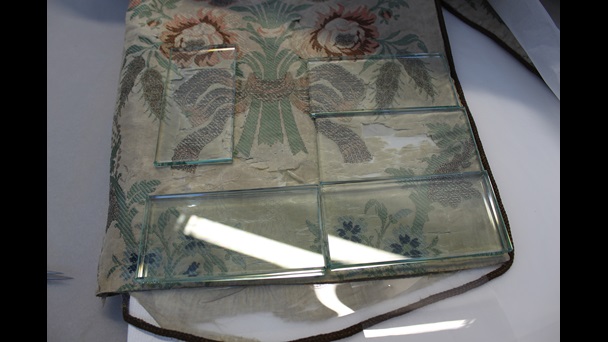 During conservation, glass weights used for crease removal (Or 13027/2)

The net template was applied slowly and carefully to the front of the degraded silk. Fortunately, it was sufficiently tacky and the fragmentary silk stuck to the adhesive with light finger pressure. The mantle could then be handled carefully and cream silk was inserted between the silk brocade and nylon net, and the silk lining.

This process had four key objectives: to prevent the adhesive coated net sticking to the lining; to infill the areas of loss; to enhance interpretation; and give support for any subsequent conservation stitching.

Once the cream silk was pinned in place, the adhesive on the nylon net was activated with acetone. The silk was then stitched to the silk brocade using extremely fine polyester thread and a network of conservation stitches. An extra fine, flexible beading needle was used to stop any visual disturbance of the silk from needle-puncture holes. 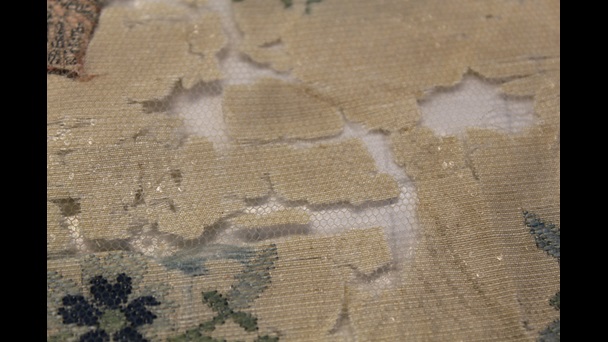 During conservation, cream net applied to degraded silk (Or 13027/2)

In order to stabilise the top-right and -left sections, the ‘lid’ was partially removed to allow limited access, and cream silk was inserted to infill and support the missing areas. Due to the pleated construction of the top of the mantle and the right-hand areas of loss being very small, the net was applied to the inside of the mantle between the brocade and the lining, and stitched in place together with small, cream silk patches.

For the top left, again a pattern was taken and the net applied to the surface of the brocade. As before, the adhesive on the net was activated using acetone and the silk and net were secured with conservation stitching before the ‘lid’ was re-attached. Where possible we used the original stitch holes. 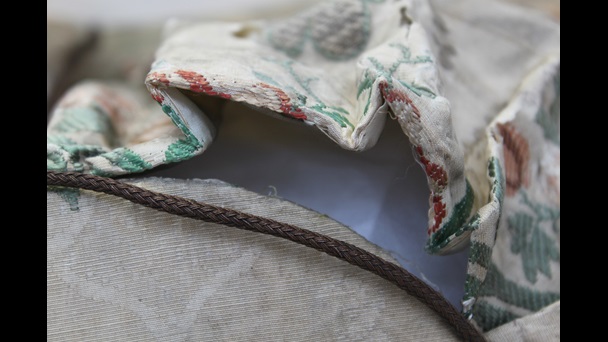 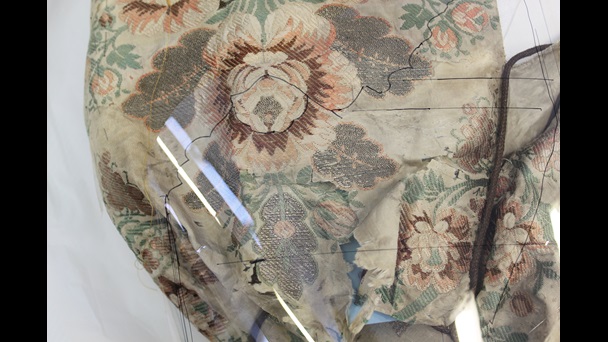 During conservation, pattern drawn on archival polyester sheeting to fit pattern (Or 13027/2)

The grey silk lining was ripped in places and there were substantial areas of loss. These areas were supported with pale grey silk and dyed nylon net, which was then secured using fine polyester thread and conservation stitches. Once the weak areas were supported and the lining was re-stitched to the silk brocade, the metal cord was reattached to the centre front, the ‘lid’ perimeter and the hem line to complete the treatment. The mantle is now stored in a conservation grade box made by our Conservation team in Boston Spa, Yorkshire. We placed the mantle on a tray and lined it with acid-free tissue. A bespoke cushion was also made and inserted to support the mantle during storage. It was completely covered in acid-free tissue and secured with cotton tape. ‘Puffs’ of acid-free tissue were placed on top of the mantle to limit any movement within the box during transportation and long-term storage. After conservation, mantle supported on bespoke cushion (Or 13027/2)

The silk degradation was initially thought to have been caused by mechanical damage through inappropriate handing. But it is more likely that the silk was exposed to light which caused the embrittlement and significant fading of the colours which can be seen when comparing the front and back ‘after’ conservation images. After conservation, back of mantle showing highly coloured silk (Or 13027/2)

On reflection, the most challenging aspect of this treatment was stabilising the degraded silk so that it could be handled during conservation. The treatment was very successful: it enabled handling, full digitisation and the long-term preservation of the object. This in turn has raised the profile of textiles in the British Library and increased access for audiences and possible future research.

The images are available on the Digitised Manuscripts platform. You can see that the quality of the images is outstanding and it’s even possible to see the nylon net used on the mantle to support the fragmentary silk.

[1] A rich fabric woven with a raised pattern, typically with gold or silver thread