This prayer book was copied by the noted scribe-artist Joel ben Simeon, who most likely executed its decoration as well. Originally from Bonn and Cologne, Joel was active in both Germany and Italy. At least 30 manuscripts have been associated with him. Inscriptions in several of them specify that he either copied the text, created the illustrations, or did both. Other codices in which the scribe and artist are not identified in the text are attributed to Joel based on similarities to the scribal practices and artistic style in the signed works.

On folio 112r of Add MS 26957, Joel specified that he wrote the prayer book, which he referred to as the tefilah (Hebrew for prayer book), for Menahem ben Samuel and for his daughter Maraviglia. The first part of the manuscript, which would have contained the prayers recited daily, is missing. As a consequence, the book now begins with the last page of the text of the daily evening prayer (f. 1r) and continues with prayers recited on the eve of the Sabbath. 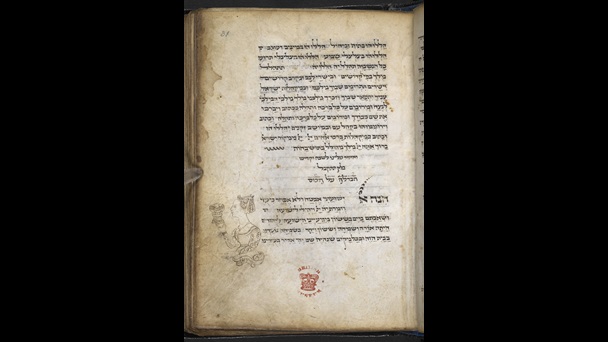 The first intact illustration in the manuscript appears next to the havdalah prayer recited over a cup of wine at the conclusion of the Sabbath (f. 31r). An elegantly attired young lady, probably a reference to Maraviglia, is portrayed raising an elaborate chalice with her right hand. This scene initiates what is the most extensive existing cycle of representations of women participating in Jewish religious rituals known from the Middle Ages and the Renaissance.

The next section of text contains the prayers recited monthly upon the appearance of the New Moon, followed by the liturgy for the festivals of Hanukkah and Purim.[1] No illustrations were included in this part of the manuscript.

As was often the case in 15th-century CE prayer books from Italy, the greatest concentration of images accompanies the haggadah, the text read during the seder — the ceremonial meal that is celebrated on the first two nights of Passover.[2] Eight scenes illustrate different aspects of the haggadah text.

The first image in this section of the manuscript depicts the raising of the seder basket containing the ceremonial foods consumed during the seder (f. 39r). Most easily identifiable are the three required matsot.[3] The placement of the basket as it appears here, next to the passage in Aramaic that begins with the words ha-lahma anya (this bread of affliction), is common in manuscripts of the period. The way in which the scene is depicted, however, is unusual, reflecting that this manuscript was destined for use by a woman. Rather than depicting exclusively male participants, as was customary, in this image a young man and woman raise the basket. Joel infused the scene with a humorous note, with the couple gazing into each other’s eyes rather than at the basket and its contents.

The next two illustrations comprise rather standard scenes that relate to the retelling of the story of the Israelites’ Exodus from Egypt: they portray an Israelite slave carrying buckets (f. 39v), and an Israelite baby being cast into the Nile (f. 42r). Hebrew inscriptions placed within banderoles identify both scenes.

A subsequent section of the haggadah text presents the opinions of various rabbis concerning the Exodus. The passages recounting the views of Rabbi Eliezer and Rabbi Akiva (f. 43v) are accompanied in the outer margin by imagined portraits of the two sages. This imagery is traditional, as is the next illustration depicting Rabban Gamliel, who spoke of three things that must be discussed in order to fulfill the obligation of recounting the Exodus (f. 45r). The second item is the matsah, which in many haggadot was accompanied by an illustration of a man raising the round, unleavened bread. In this manuscript, intended for the use of Maraviglia, a young woman is shown raising the matsah instead (f. 45r). 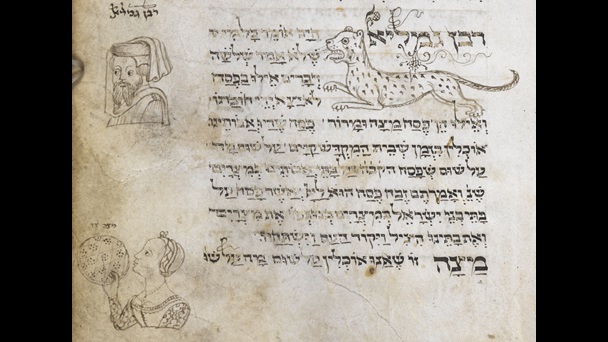 The last element discussed by Rabban Gamliel is the maror, the bitter herbs. The illustration for this passage in the text is conventional, with a young man — rather than a woman — shown holding a bunch of leaves while pointing to the text that is recited about the maror (f. 45v).

After the conclusion of the text of the haggadah and the prayers read during the Passover festival, and immediately before the section that deals with the festival of Shavuot (the Feast of Weeks), the scribe copied the blessing recited when the Omer is counted nightly for forty-nine days from the second day of Passover until the day before Shavuot seven weeks later.[4] In this uncommon illustration, the person pointing to the text to be recited is female. 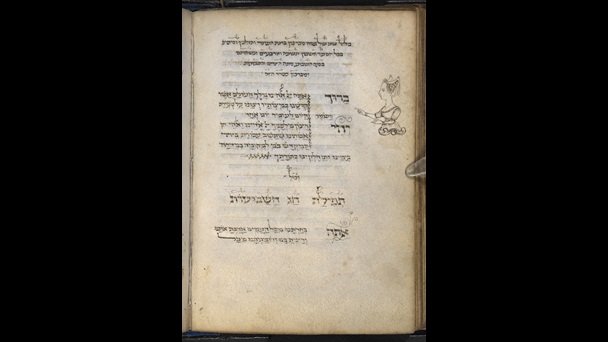 The final image of a woman in this manuscript appears immediately before the evening service for Yom Kippur (the Day of Atonement) (f. 74v). In the outer margin a young lady, her hands posed with her palms together in a gesture of prayer, bows from her waist while reciting a vidui (confessional prayer). The Hebrew word for this prayer is inscribed above her head. 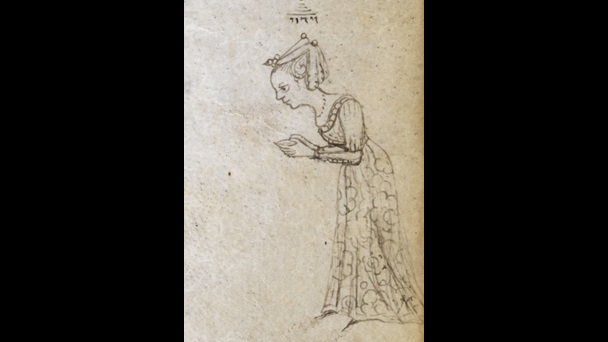 One of the most captivating aspects of this prayer book is found in figures drawn in the margins of two pages, each of which was later partially erased. In the manuscript’s current incomplete state, the first cancelled image now stands as the first illustration. It appears next to Psalm 34, recited during the morning service of the Sabbath (f. 15v). Although much of the figure was scraped away, the outline of King David wearing a crown is still discernible, as is the faint contour of his head resting on his right hand, and his bent left leg. The same pose was used for a sleeping figure in the Rothschild Mahzor produced in Florence in 1490 CE (f. 295v) in a section of the manuscript containing illustrations in the style of Joel ben Simeon.[5]

This scribe-artist sometimes employed visual puns that invited double meanings for words. In the Maraviglia Prayer Book the Hebrew words at the beginning of the psalm, le-David be-shanoto (of David when he changed [the essence of his person]) refer to King David when he feigned madness (1 Samuel 21:11–16). In the accompanying illustration traces of an inscription remain in the banderole above David’s head. Modern multispectral images make clear that the text is a repetition of the Hebrew phrase, but unlike the appearance of the words in the main text, here they are not vocalised. They therefore can also be read as le-David be-shenato (of David in this sleep), which is what Joel playfully depicted. It is possible that a later reader, unaware of Joel’s good-humored punning, deemed the figure in the margin inappropriate and had it scraped off, albeit not completely. A second erased image appears within the liturgy of the Jewish New Year, in the outer margin next to the text that is recited when the shofar (horn) is blown (f. 71r). Only a faint outline of the shofar remains. With multispectral images, the details of the bust-length figure of a young man wearing a cap and blowing a horn are visible. A comparable image appears in the Rothschild Mahzor (f. 247r), where a youth with a similar hairstyle and cap is shown in the same pose. As the illustration in the Maraviglia Prayer Book is appropriate, its removal is surprising. The British Library’s multispectral image from 2015 has brought to light an unusual feature in this illustration — a long plume attached to the man’s hat. The feather, utilised to clean the shofar, is not found in other extant illustrations in Hebrew manuscripts.[6]  Although impossible to ascertain, a later observer may have misconstrued the plume in the 15th-century CE cap to be female attire and mistakenly concluded that the image was that of a young lady. As women were not allowed to blow the shofar ritually, the image would have been viewed as inappropriate and therefore removed. 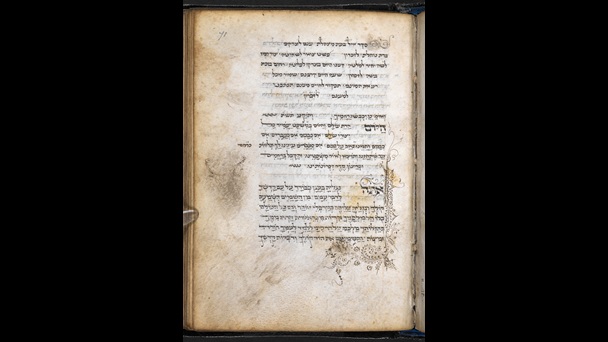 The Maraviglia Prayer Book provides important documentation of religious practices among women in 15th-century CE Italy. While the illustrations depicting a young lady participating in Jewish rituals are unique, so is the appearance of the feather used by the shofar blower, which only recently has been revealed.

[1] Lasting eight days, Hanukkah, the Jewish Festival of Lights, commemorates the rededication of the Second Temple in Jerusalem. Purim memorialises the salvation of the Jews in ancient Persia, recounted in the book of Esther.

[2] In Israel the seder is celebrated only on the first night of the festival.

[3] During Passover only unleavened bread, known as matsah, is consumed. The plural form of the word is matsot.

[4] Omer refers to a measure of barley that was brought as a sacrifice during this period at the time the Temple in Jerusalem existed.

[5] The manuscript is now in New York, in the Library of the Jewish Theological Seminary, MS 8892.

[6] I am indebted to Angelo M Piattelli for bringing this Italian custom to my attention.