Simḥah ben Samuel of Vitry[1] (died before 1105 CE) compiled his maḥzor as a liturgical and legal compendium.[2] It not only includes the annual cycle of Jewish prayers according to the northern French rite (nusaḥ Tsarfat), but it is also based on two major Jewish sources from 9th-century CE Gaonic Babylonia.[3]

These sources are the Seder Amram Ga’on[4] and the Halakhot Gedolot,[5] as well as the teachings of Simḥah’s master, Solomon ben Isaac of Troyes (Rashi, 1040 – 1105 CE) – the most influential biblical and Talmudic commentator of his time. The Maḥzor Vitry is the only work of its kind from the School of Rashi to combine liturgy and law, unlike other famous legal codes such as Sidur Rashi, Sefer ha-Sedarim, Sefer ha-Orah or Sefer Isur ve-Heiter.

Housed in various libraries around the world, these 11 manuscripts of the Maḥzor Vitry are dated between the mid-12th century CE and the mid-14th century CE. From a structural point of view, they do not originate from a unique model, as none of them are identical. Each surviving copy contains an annual cycle of prayers,[6] either following the northern French (Tsarfat) rite or the German (Ashkenaz) rite. The latter confirming the popularity of this work in the Rhineland.

Interspersed between the prayers is a variable selection of laws (halakhot)[7] relative to the annual Jewish liturgy (e.g. Shabat, Pesaḥ, Shavu’ot, Sukot, Rosh ha-Shanah, Yom Kipur) and to Jewish daily life practices. These include: marriage and divorce contracts (sitere ketubot/sitere gitin), ritual slaughter (sheḥitah), family purity (nidah), circumcision (milah) and mourning (evel). This meant that the Maḥzor Vitry manuscripts were used not only for prayer but also for study.

From the first half of the 13th century CE, an expansion in the breadth of these manuscripts is visible. A selection of extracts or complete works is integrated as literary additions to the liturgical-legal core of the manuscripts. These works stem from either the Talmudic or medieval periods and are of the following genres: legal, ethical, midrashic,[8] mystical, scientific, calendrical and premonitory.[9] From this period onwards, the Maḥzor Vitry manuscripts can be considered as portable libraries.

Written circa 1242 CE (something we know thanks to a calendar at the end of the manuscript), the British Library Maḥzor Vitry (Add MS 27200-Add MS 27201) is the most extended version of the collection and contains the richest selection of laws relative to liturgy and daily practices. 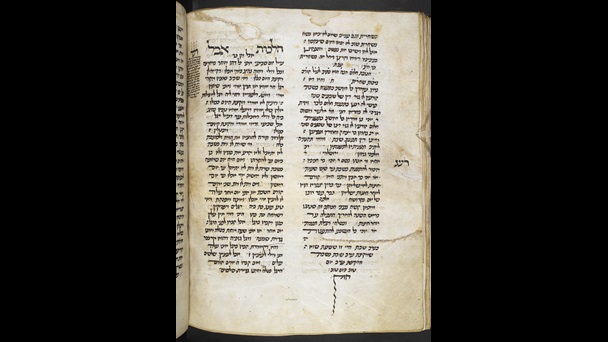 One of the legal pieces that appears in a majority of the manuscripts (seven to be precise) is that on mourning (Hilkhot evel). When compared all together, this text reveals only minor scribal errors and textual variants between the manuscripts, suggesting a probable common source. The British Library Maḥzor Vitry has also been used for two editions: a first one by Solomon Hurwitz (1st edition: 1893 and 2nd edition: 1923)  and a second more recent one by Arye Goldschmidt (2003 – 2009), who edited all the laws found in Add MS 27200-Add MS 27201 and compared them with those found in six other manuscripts of the corpus.

With a total of 451 folios and an Atlantean format (395 x 310mm),[10] this manuscript is also regarded as the largest in size of any Jewish liturgical manuscript according to the north French rite (nusaḥ Tsarfat). Treated in Jewish tradition as the main source for this lost rite, the Maḥzor Vitry preserves traces of customs (minhagim) used by Jewish communities of medieval Northern France, who were wiped out by the infamous expulsion from France under Philipp the Fair in 1306 CE. One of the most important of these customs, shown below, is the Pitum ha-Ketoret prayer, recited as an addition at the end of the daily evening service. 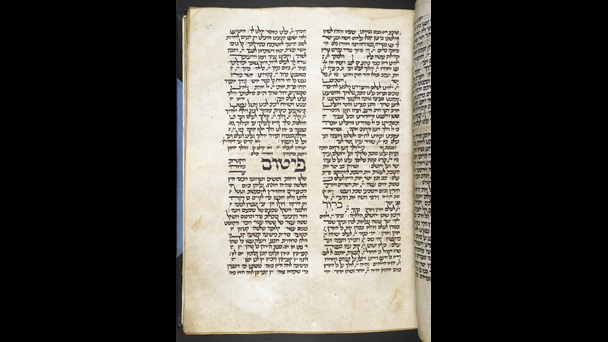 This prayer commemorates the incense sacrifices which took place morning and afternoon in the Temple of Jerusalem, by the enumeration of the ingredients in the incense used for these sacrifices. This custom is derived from the previously mentioned Seder Amram Ga’on, which stipulates that the addition should be read at the end of the daily morning[11] and evening prayer.

A particularity in the British Library Maḥzor Vitry lies within its multi-layered structure. In addition to the wealth of laws, this manuscript includes many anonymous commentaries accompanying them. However, several others are signalled either by the letter ‘ת’ (tav), an abbreviation for tosefet (meaning ‘addition’), or by the letters ‘אבן’ (even).

The commentaries ending with the letter ‘ת’ have been identified as authored by Isaac bar Dorbelo (died c. 1175 CE), a contemporary of Jacob ben Meir (Rabenu Tam, c. 1100 – 1171 CE), the most illustrious of Rashi’s grandsons. The commentaries ending with ‘אבן’, have been established as those by the famous Provençal scholar, Abraham ben Natan of Lunel (ha-Yarḥi, c. 1155 – 1215 CE).

Below in the left column of a page of the manuscript is a commentary on the laws of Rosh ha-Shanah. Amidst this commentary, you can not only see the acronym ‘אבן’ (line 26) and the letter ‘ת’ (lines 3 and 16), but also the full name of ‘יצחק בר דורבלו’ (Isaac bar Dorbelo) (lines 22 – 23). 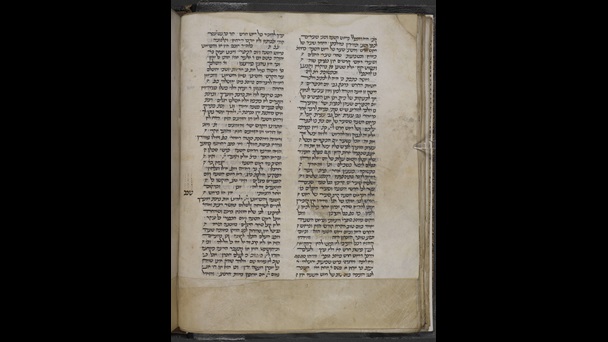 It has therefore been suggested that the British Library Maḥzor Vitry is the result of three different Maḥzor Vitry models, each with their own commentaries. These were put together by the scribe of Add MS 27200-Add MS 27201 in order to enhance the content and its function for his own study purposes.

The British Library Maḥzor Vitry also offers a glimpse into the literary interests of the mid-13th-century CE intellectual elite from northern France, reflecting a clear point of convergence towards the study of halakhah. The culmination of this intellectual creativity is best represented by the Sefer ha-Terumah, a work of French tosafist[12] inspiration by Barukh ben Isaac of Worms (active c. 1200 CE).

By virtue of the wealth of its sources and its clear structure, this treatise has not only been cited by many rabbinical authorities from medieval Ashkenaz, Italy and Spain, but has been preserved in many manuscripts, in complete and partial form.

As for the British Library Maḥzor Vitry, it includes many extracts from this work on laws in relation to Jewish daily life, such as the Sabbath (Shabat), family purity (nidah), phylacteries[13] (tefilin), ritual slaughter (sheḥitah) and wine which is improper for use (yayin nesekh). Illustrated below is an extract of the laws on tefilin (Hilkhot tefilin), clearly citing the source of Sefer ha-Terumah in its title (left column, lines 12 – 13). 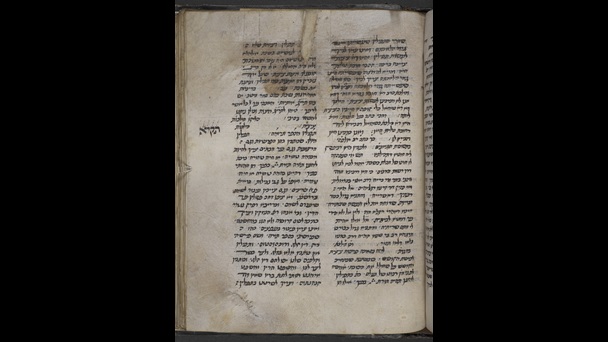 The brief historical and literary contextualisation of this important Hebrew liturgical-halakhic compendium has helped shed light on a landmark of Jewish intellectual creativity from medieval northern France. It is one of the many treasures of the British Library.

[1] A town in Champagne (Department of the Marne) in northern France.
[2] Liturgical-halakhic compendium.
[3] The Gaonic era (589-1038 CE) in Babylonia is named after the title of ga’on (i.e. Excellency), given to the heads of the two great Talmudic academies, Sura and Pumbedita. These ge’onim were also considered as the spiritual leaders of the whole Jewish diaspora and have left us a rich legacy of written decisions and rulings called responsa literature.
[4] Literally meaning Order of Amram Ga’on. This work is attributed to Ga’on Amram ben Sheshna (died c. 875 CE) and designed as the first prayer ritual. It was destined for the Jewish communities of Spain and organised as a compilation of liturgical and legal material in Hebrew and Aramaic.
[5] Literally meaning Great Laws. This work is attributed to Simon Qeraya (early 9th century CE) and is considered as the first legal code of all the Talmudic laws, written in Aramaic.
[6] Including liturgical poetry for each Jewish religious celebration or fast.
[7] Sing. halakhah. A collective body of Jewish religious laws derived from Torah and the Talmud.
[8] The Midrash is a term given to a type of rabbinical literature of homiletical nature, mainly consisting of anthologies, stories, sermons and even laws, in the form of commentaries to the Tanakh (Torah, Prophets and Hagiographs).
[9] Divinatory texts based on predictions of future events according to the weather (Brontologia) and/or spasms of the human body (Twitch Divination).
[10] Presently divided in a two volume set and bound out of order.
[11] This prayer is also read at the end of the morning service on Shabat (Musaf).
[12] Lit. additions. Scholars and rabbis from 12th-century CE Franco-Germany, known also as the Rishonim, who explained the Talmud by compiling new questions, deductions and rulings in the form of glosses.
[13] Black boxes worn on the forehead and on the right or left arm during the morning daily prayers.