Learn about the origins of writing in the Maya region - encompassing the modern countries of Belize and Guatemala, southern Mexico, and western Honduras and El Salvador.

History of the Maya writing system

Maya writing was in use in the Maya area from about 300 BC (when we see it in the murals of a site called San Bartolo in Guatemala) to the 16th century when the Spanish Conquistadors mention it in their reports.

Although there are still nearly 30 Mayan languages spoken in the area today, by more than 6 million speakers in Maya communities, the writing system had already mostly fallen out of use by the time the Spanish colonisers arrived in the 16th century.

The Christian priests and missionaries who arrived burned many ‘idols’ and ‘heathen effigies’ – together with unique bark-paper books used for recording calendrical, astronomical and ritual information – to ensure lasting conversion to Christianity.

The spoken languages survived and developed throughout the centuries, but as with many indigenous and smaller languages in the world, have been declining over time in favour of the majority languages, in this case Spanish. The loss of language was also exacerbated through colonialism and racism, as it was often seen as advantageous to be as non-indigenous as possible (and often still is). Schools were required to teach in Spanish only and often forbade the use of Mayan languages.

In the last decade however, Mayan languages have had a revival with the emergence of more cultural awareness and ethnic pride in ‘being Maya’, as well as the end of the civil war in Guatemala. In both Mexico and Guatemala there are attempts to integrate Mayan languages into the curriculum, although the success of these programmes is mixed; some Mayan languages are endangered and a few are about to die out.

Although information has been lost through time and the massive changes wrought by the conquest and colonialism, we have some idea of how the Maya elite lived during the Classic period (ca. AD 250 to 900/1000) from archaeological remains and courtly scenes painted on ceramics.

An important source for historical details are inscriptions, which are found on:

Most surviving texts come from stone and ceramics, in large part as these materials survive best in the tropical climate of the Maya area. We know that the Maya also used bark paper at that time, folded into so-called codices, but only very few and very late examples of these have survived the humidity and the environment.

Both environmental degradation and looting of carved objects for the international art market can be a problem for the survival of Maya texts. Looting removes the objects from their context and means the loss of vital information for researchers and often makes them inaccessible in private collections. Nevertheless, particularly over the last 150 years, a large body of Maya writing has been collected gradually by scholars, who have made drawings, casts, and taken photographs, or through monuments deposited in museums.

The size of some of the monuments, together with the artistic nature of the writing, fascinated explorers from the beginning. But until the mid-20th century very little was known about how the writing system worked and a lot of the decipherment has only happened since the 1980s.

The Maya writing system baffled many researchers for quite some time and the attempts at decipherment in the 18th and 19th centuries were unsuccessful (apart from gaining some understanding about the calendar). It was not until the 1950s that the system was understood well enough to start the wave of decipherment that dominated the 1980s and 1990s.

Ancient Maya script can now be read in most cases – although there are still about 15% of glyphs that are undeciphered and the meaning of a few of the deciphered ones are not well understood.

It is a beautiful script and many ancient Maya artists seem to have focused not only on writing down content, but also making it aesthetically pleasing.

We now know that Maya is a sophisticated writing system – the only one in the Americas that can fully express both the spoken language and grammar.

How does the Maya writing system work?

The ancient Maya writing system is complicated. It is logosyllabic, meaning that:

These word signs and syllable signs were then combined to spell words. The signs were mostly arranged in square or rectangular blocks and these blocks were in turn arranged into double columns that were read from left to right and top to bottom.

What do Maya texts deal with?

A large amount of the surviving ancient Maya texts, especially on stone monuments, deal with the lives of kings and queens – when they were born, whom they married, when they died and who followed them into kingship.

Many texts contain a large amount of calendrical information, starting with a very detailed description of the date as well as details of astronomical events, followed by what happened at this point in time, followed by who was doing it or to whom it was being done to.

What was the purpose of Maya monuments?

During the Classic period (ca. AD 250 to 900/1000) the landscape was filled with large (and smaller) cities and their surrounding hamlets. Most of these cities had their own rulers and royal courts, which in turn were connected by complex social relationships through marriage alliances, warfare and tribute hierarchies.

These large cities with their awe-inspiring architecture and often large public plazas are where the ruling elite aimed to immortalise their genealogical history and successes with monuments, or stelae – a bit like the Nelson column in Trafalgar Square. 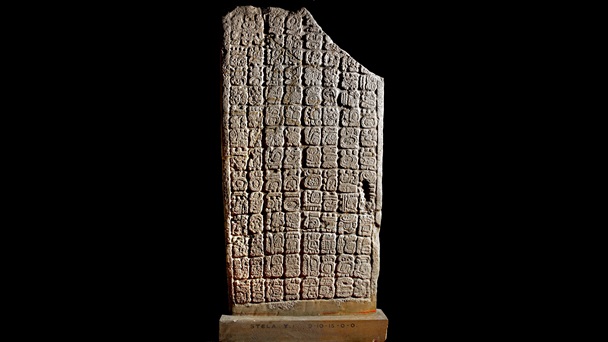 Stela D is a typical example of an ancient Maya monument. These kind of free-standing, intricately carved stones can be found throughout the Maya area.

Stela D is one of more than 40 monuments known from the site of Pusilha, a site in southern Belize, which were carved and erected mainly from the late 6th to the mid-8th century AD. It is carved on one side with a (now very weathered) image of a Maya ruler in his finery, while the other side is covered with a hieroglyphic inscription.

This text is read in four double columns starting at the top left.

The stela was erected in AD 647 by a ruler called K’ak’ Uti’ Chan. It contains praise about his father’s great deeds, as well as an auspicious calendar date that the monument was dedicated on.

Pusilha is one of several ancient Maya sites with a large number of texts relating to warfare between different Maya cities. Stela D in particular contains several metaphors that are warfare-related: k’asay lakam tun ('the stela got broken'), jubuy u tok’ u pakal ('was downed the ﬂint and the shield') and k’ik’iy ('blood was shed').

Other stelae and panels at other sites are less blood-thirsty and relate to the history of royal marriages or the rituals that the rulers had to enact to keep gods and ancestors happy.

The topics that the Maya inscriptions do not talk about are the concerns of the common people, nor are there any administrative texts, although things like accountancy might have been recorded in codices or other materials that did not survive the intervening centuries.


The art of Maya writing

Nowadays, the ancient Maya script is mainly of interest to archaeologists, epigraphers, and linguists. The playfulness of ancient Maya scribes and the beauty and diversity of the signs have also inspired modern designers and artists. Even heavy metal band Iron Maiden have covered the tail of their private plane in Maya writing (written by an epigrapher).

With a growing number of Maya-speaking researchers, there are now more attempts to reconnect modern Maya people with the writing and art of their ancestors.