How, and why, does writing change over time?

Whilst writing surrounds us in the modern world, new digital technologies are changing the way we communicate:

It is clear that writing is increasingly digital. In 2018, in one average minute, it is calculated that 187 million emails, 18 million text messages and 38 million Whatsapp messages were sent and 3.7 million Google enquiries were made.

On the face of it, writing is far from endangered. Yet when technologies change, many of the conventions that bring order to the world of the written word are challenged and sometimes altered. Each day we come across stories in the press that demonstrate this:

The change in the nature of writing, although more rapid in recent years, is no new phenomenon

Writing has always changed over time

Writing has always evolved in response to human needs and fashions. As it spread into different areas of life, it has been adopted and embedded in law, the marketplace, learning, religion, storytelling and politics – each use reshaping the forms and nature of the written artefacts that are produced.

One of the most powerful forces shaping writing can be politics. In 1926 and 1927, for example, the Soviet Union undertook a massive campaign to switch writing in the Turkic languages spoken within its borders from the Arabic script to a romanised alphabet. Among the reasons for doing so was the desire to create a break between Soviet Muslim populations and the wider Islamic world.

Today’s roman cursive (joined-up) script evolved over several centuries from written roman capital letters. In certain places, writing can come to seem less functional than it once was because the pace of life speeds up and one has to write more quickly.

Hand, pen and brush began to take shortcuts around the forms, which is how lower-case roman letters evolved out of roman capitals. Letters also started to merge and join with one another, creating ligatures between forms. For example, the ampersand (&) developed as a symbol from joining e and t (et is the Latin word for ‘and’).

Let’s take one letter as an example of this evolution. Look at the e in this manuscript page below. Capital E is written with the vertical down stroke first, followed by the bottom cross bar, then the top bar, then the middle. If you write quickly from the vertical down stroke into the horizontal baseline bar, the join between the two strokes will begin to round out. This is how the E changed from an angular letter to a more rounded one. 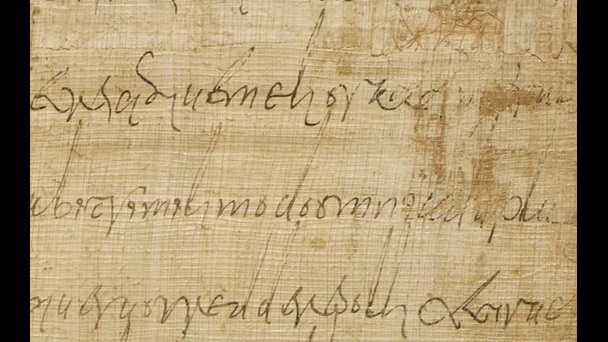 With an increasing need to write more and faster, early Roman cursive evolved. Letters are rounder, looped and sometimes joined. Here we see the origins of our modern minuscule or ‘lower-case’ letters.

We are also gifted with artistic imagination and love to celebrate our skills, so simple creativity has shaped our written heritage too. 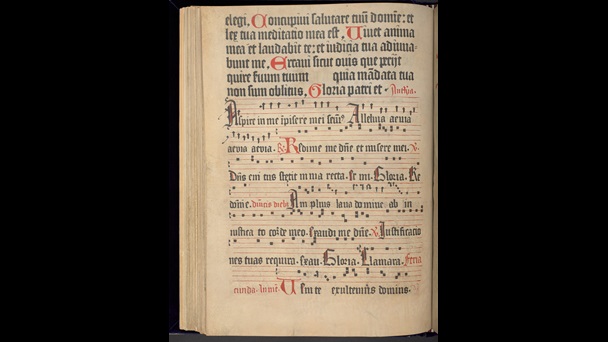 The typeface in this printed book of psalms is modelled on a ‘gothic textura’, similar to the handwriting seen in the Gorleston Psalter. The page shown here also includes an early appearance of printed music to which, after printing, a scribe has added initial letters in red ink with a pen, a process known as rubrication.

In medieval Europe, not every letterform had to be identical. Variety was often encouraged, especially in capital letters from the gothic period. In this Book of Psalms, known as the Mainz Psalter, we find a wide variety of capital letters. In the printed gothic black-letter writing at the top, we have some large wide red capitals.

By contrast, within the handwritten black-letter text inside the music, the scribe has written tall thin black capitals. In addition, if you look at the capital As across the page, these are all different shapes and sizes. The scribe was clearly enjoying themselves.

Writing technologies come and go. There have been several major shifts in the materials upon which we write (the substrates) over the last few thousand years.

In China, writing materials including bone, bronze, bamboo strips and wood had been supplemented with paper by at least the 3rd century CE.

In Roman culture, during the early Christian centuries, there was a significant move away from using papyrus in scroll form towards making book-shaped artefacts with pages of papyrus or vellum (specially-prepared animal skins). These notebooks eventually developed into grand illuminated manuscripts.

This is how top-of-the-range books were being written in Europe in the mid-15th century, at the end of the manuscript age, just as printing was beginning to take off. They contained richly-coloured pictures and several styles of lettering. 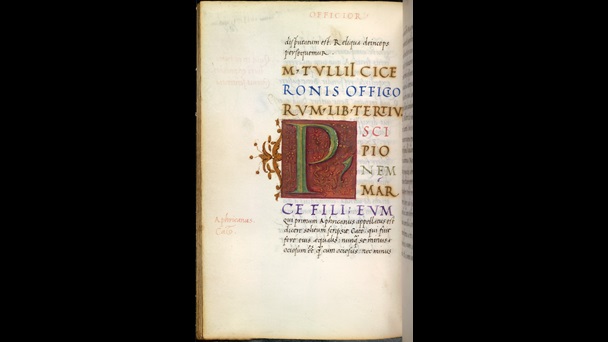 You can spot evidence of the writer’s shaky hand in the double p in appellatus on the top line of the section in black.

Written on soft calf-skin vellum with a quill pen, this is a luxury manuscript. Bartolomeo Sanvito, the scribe – who began work as a legal clerk – was famous at the time and coming to the end of his career. His writing betrays a slight tremor in his hand (see the descending strokes), perhaps the result of rheumatism.

Then, in the later Middle Ages, expensive vellum gave way to cheaper and more readily available paper in Europe, and the form of written artefacts began to change again.

Printing as a method for making large numbers of identical copies of written artefacts was also an important innovation. In East Asia, printing from carved wooden blocks had proved a reliable low-cost method for reproducing multiple copies of books and other documents since at least the 8th century CE. Five hundred years ago, first in Korea, and then in an apparently separate development in Europe, the invention of metal movable type opened up further new opportunities. 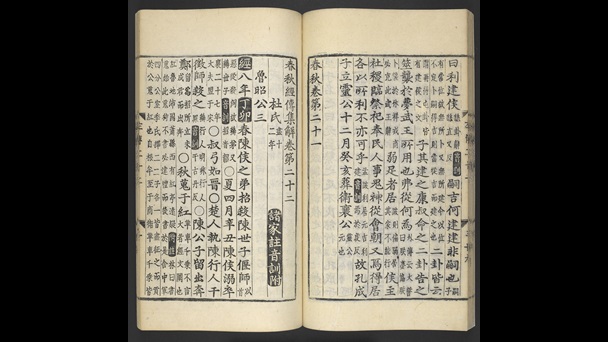 Anonymous Korean metalworkers of the 14th century were the world's first printers of movable type, predating Gutenberg's famous bible by over 70 years.

In European countries, the availability of printed writings went hand in hand with the spread of knowledge, and the effect was transformative, leading to the Age of Enlightenment.

How will you make your mark?

Today we are living through another seismic shift in the order of the written word. It is a revolutionary time, and digital technology is one of the triggers. But of course it has not ended there.

Electronic writing, using keyboards and screens, has made another kind of writing and writer possible. Writing can now happen faster, is more easily reproduced and distributed across vast geographies, and the distribution systems are more accessible. Because writing is a social activity, it creates and binds together human communities – the impact of which has been huge.

So now is the moment to ask: what do we want writing to do for us? How will you make your mark?