What is Magna Carta? Why was it created? What does it say, and why has it become one of the most celebrated documents in history?

Narrated by Monty Python’s Terry Jones, this animation takes you back in time to medieval England in 1215 under the reign of Bad King John. Why was the charter originally created? And what does it actually say?

What is Magna Carta?

Magna Carta, meaning ‘The Great Charter’, is one of the most famous documents in the world. Originally issued by King John of England (r. 1199–1216) as a practical solution to the political crisis he faced in 1215, Magna Carta established for the first time the principle that everybody, including the king, was subject to the law. Although nearly a third of the text was deleted or substantially rewritten within ten years, and almost all the clauses have been repealed in modern times, Magna Carta remains a cornerstone of the British constitution.

Most of the 63 clauses granted by King John dealt with specific grievances relating to his rule. However, buried within them were a number of fundamental values that both challenged the autocracy of the king and proved highly adaptable in future centuries. Most famously, the 39th clause gave all ‘free men’ the right to justice and a fair trial. Some of Magna Carta’s core principles are echoed in the United States Bill of Rights (1791) and in many other constitutional documents around the world, as well as in the Universal Declaration of Human Rights (1948) and the European Convention on Human Rights (1950).

Why does Magna Carta matter today?

In 1215 Magna Carta was a peace treaty between the King and the rebel barons. In that respect it was a failure, but it provided a new framework for the relationship between the King and his subjects. The 1225 version of Magna Carta, freely issued by Henry III (r. 1216–72) in return for a tax granted to him by the whole kingdom, took this idea further and became the definitive version of the text. Three clauses of the 1225 Magna Carta remain on the statute book today. Although most of the clauses of Magna Carta have now been repealed, the many divergent uses that have been made of it since the Middle Ages have shaped its meaning in the modern era, and it has become a potent, international rallying cry against the arbitrary use of power. 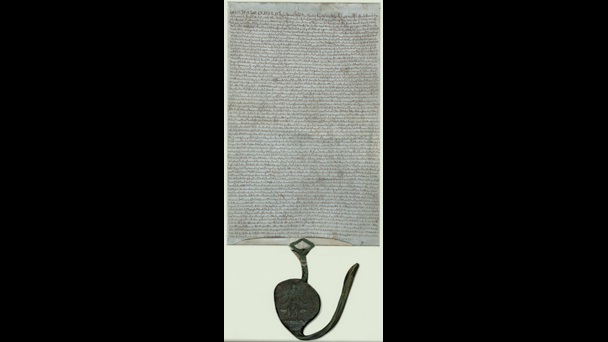 What does Magna Carta say?

Although Magna Carta contained 63 clauses when it was first granted, only three of those clauses remain part of English law. One defends the liberties and rights of the English Church, another confirms the liberties and customs of London and other towns, but the third is the most famous:

No free man shall be seized or imprisoned, or stripped of his rights or possessions, or outlawed or exiled, or deprived of his standing in any other way, nor will we proceed with force against him, or send others to do so, except by the lawful judgement of his equals or by the law of the land. To no one will we sell, to no one deny or delay right or justice.

This clause gave all free men the right to justice and a fair trial. However, ‘free men’ comprised only a small proportion of the population in medieval England. The majority of the people were unfree peasants known as ‘villeins’, who could seek justice only through the courts of their own lords.

Buried deep in Magna Carta, this clause was given no particular prominence in 1215, but its intrinsic adaptability has allowed succeeding generations to reinterpret it for their own purposes. In the 14th century Parliament saw it as guaranteeing trial by jury; in the 17th century Sir Edward Coke (1552-1634) interpreted it as a declaration of individual liberty in his conflict with the early Stuart kings; and it has echoes in the American Bill of Rights (1791) and the Universal Declaration of Human Rights (1948).

Much of the remainder of Magna Carta dealt with specific grievances regarding the ownership of land, the regulation of the justice system, and medieval taxes with no modern equivalent (such as ‘scutage’ and ‘socage’). It demanded the removal of fish weirs from the Thames, the Medway and throughout England; the dismissal of several royal servants; the standardisation of various weights and measures; and so on.

Magna Carta stated that no taxes could be demanded without the ‘general consent of the realm’, meaning the leading barons and churchmen. It re-established privileges which had been lost, and it linked fines to the severity of the offence so as not to threaten an individual’s livelihood. It also confirmed that a widow could not be forced to remarry against her wishes.

Why was Magna Carta created?

In 1214, a mercenary army raised by King John was defeated by the French at the Battle of Bouvines in northern France. This army had been paid largely by the tax known as ‘scutage’, a payment made to the Crown in place of providing knights for military service, and the focus of much baronial discontent.

King John’s reign was also marked by his strained relationship with the Church. John had rejected the election of Stephen Langton (1150–1228) as Archbishop of Canterbury, and in 1208 the Pope issued a decree (known as an ‘Interdict’), prohibiting people in England from receiving the sacraments or being buried in consecrated ground. King John was excommunicated by Pope Innocent III  (1161–1216) in 1209, and the Interdict remained in place until John surrendered his kingdom to the overlordship of the Pope in 1213.

In 1213, a party of rebel barons met with Archbishop Stephen Langton and the papal legate (a representative of the Pope) to air their grievances against the King. They also urged that John should agree to confirm the coronation charter issued by his ancestor, King Henry I, in 1100, which had promised ‘to abolish all the evil customs by which the kingdom of England has been unjustly oppressed’. In early 1215, the dispute escalated when King John refused to meet the barons’ demands. In May many barons renounced their oaths of allegiance to him, choosing Robert fitz Walter (1162–1235) as their leader. Their capture of the city of London that same month was a turning point in their campaign.

Once London was in the barons’ hands, John had no option but to negotiate with them. The two sides met at Runnymede, on the River Thames near Windsor in the south of England, in June 1215. The demands of the barons were recorded in the document known as the Articles of the Barons. Following further discussions with the barons and clerics led by Archbishop Langton, King John granted the Charter of Liberties, subsequently known as Magna Carta, at Runnymede on 15 June 1215. On 19 June the rebel barons made their formal peace with King John and renewed their oaths of allegiance to him.

The King’s clerks set about drawing up copies of the agreement for distribution throughout the kingdom. It is not certain how many copies of the 1215 Magna Carta were originally issued, but four copies still survive: one in Lincoln Cathedral; one in Salisbury Cathedral; and two at the British Library. Like other medieval royal charters, Magna Carta was authenticated with the Great Seal, not by the signature of the king. 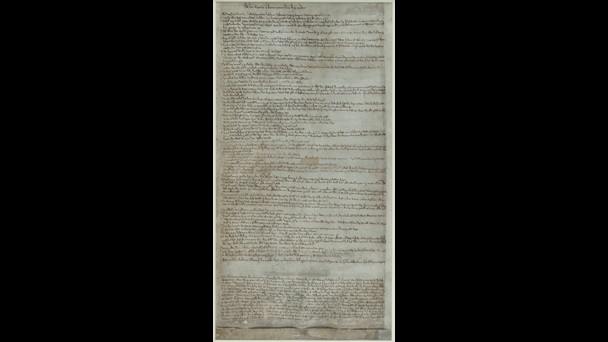 Was Magna Carta effective in the short term?

Although King John agreed the terms of Magna Carta and the barons renewed their oaths of allegiance, the settlement did not last long. Aggrieved by the manner in which Magna Carta was to be enforced, John sent messengers to the Pope (the overlord of the kingdoms of England and Ireland) in the summer of 1215, requesting that the charter be annulled. In turn, the barons refused to surrender the city of London to the King until Magna Carta had been implemented. Pope Innocent III was alarmed by the charter’s terms, and on 24 August 1215 he issued a document known as a papal bull, describing Magna Carta as ‘illegal, unjust, harmful to royal rights and shameful to the English people’, and declaring the charter ‘null and void of all validity for ever’.

In September 1215, civil war broke out between King John and his barons. The King raised an army of mercenaries to fight his cause, while the barons renounced their allegiance to him, and invited Prince Louis (1187–1226), son of the King of France, to accept the English crown. Louis invaded England in 1216, and England was still at war when John died of dysentery on the night of 18 October 1216. 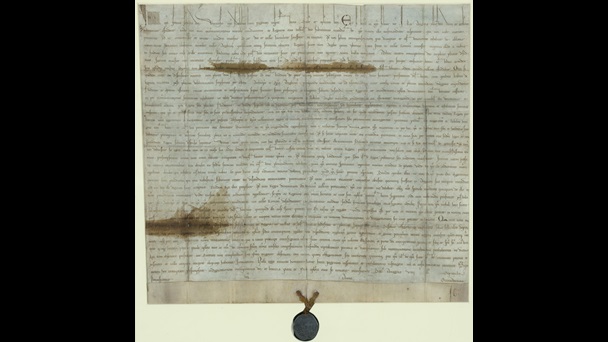 What was the long-term impact of Magna Carta?

Magna Carta is sometimes regarded as the foundation of democracy in England. In fact, most of its terms applied only to a small proportion of the population in 1215, and the implementation of the charter in subsequent centuries remained open to the interpretation of the courts.

Revised versions of Magna Carta were issued by King Henry III (in 1216, 1217 and 1225), and the text of the 1225 version was entered onto the statute roll in 1297. Magna Carta had limited the circumstances under which the King could raise money without the consent of the people. The 1225 version of Magna Carta had been granted explicitly in return for a payment of tax by the whole kingdom, and this paved the way for the first summons of Parliament in 1265, to approve the granting of taxation.

In the 17th century, opponents of King Charles I (1625-49) used Magna Carta to regulate the arbitrary use of royal authority. Sir Edward Coke, declared that ‘Magna Carta is such a fellow, that he will have no sovereign’, and in 1628 he helped to draft the Petition of Right, which limited royal power and made explicit reference to Magna Carta. When King Charles was himself put on trial in 1649, it was argued that his attempts to halt the proceedings contravened the clause of Magna Carta which prohibited the delay of justice.

Magna Carta has consequently acquired a special status as the cornerstone of English liberties. This is despite the fact that the vast majority of its clauses have now been repealed, or in some cases superseded by other legislation such as the Human Rights Act (1998). Magna Carta nonetheless retains enormous symbolic power as an ancient defence against arbitrary and tyrannical rulers, and as a guarantor of individual liberties.