‘It is not for the king’s subjects to question or condemn his actions.’ This was the opinion of one of the most learned royal administrators in the age of Magna Carta. Richard fitz Nigel (d. 1198) served King John’s (r. 1199–1216) father, Henry II (r. 1154–89). He knew Plantagenet kingship inside out, and he summed up his knowledge in a handbook known as the Dialogue of the Exchequer, written in the 1180s. Royal power, fitz Nigel argued, came from God, and as a result only God was fit to judge the behaviour of kings. Yet he added a dark warning. ‘Let no one, however rich, flatter himself that he can misbehave with impunity, for of such people it is written, “The powerful shall suffer powerful torments”.’[1]

Dialogue of the Exchequer 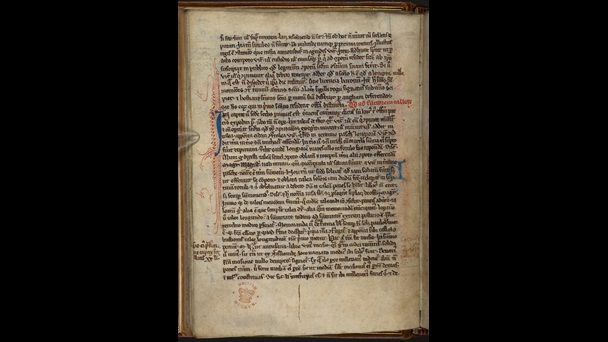 Richard fitz Nigel’s treatise states: ‘Let no one, however rich, flatter himself that he can misbehave with impunity, for of such people it is written, “The powerful shall suffer powerful torments”.’ 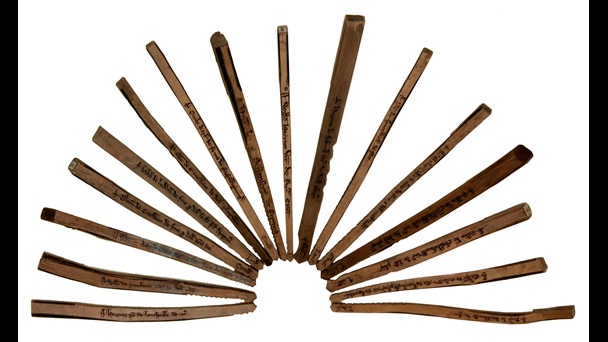 Tally sticks were used by officials of the Exchequer as physical proof of payments to the king, functioning in the same way as a modern receipt.

This poetic prophecy aside, fitz Nigel’s assessment of kingship would not have sat at all well with the rebellious barons and churchmen who lined up at Runnymede in June 1215. These men had endured 16 years of John’s kingship – a rule based largely on extortion, legal chicanery, blackmail and violence. They had seen enough, and Magna Carta was their answer. Indeed, if any connecting idea can be said to run beneath all the varied clauses of Magna Carta, it is that, far from leaving the king to be judged by the Almighty, his subjects claimed a very clear right to discipline him when he stepped out of line. All that was required was a method, which is why clause 61 of Magna Carta 1215 – the so-called ‘Security Clause’ – allowed a committee of 25 barons to make war on the king if he failed to keep to its terms.

However, because of Magna Carta’s explicit attempts to restrain the king, it collapsed: plunging England into a civil war that culminated with John’s death, a French prince occupying London and foreign mercenaries terrorising the population. Clearly, medieval kings – and medieval kingship – had to be handled with care.

The paradox of medieval monarchy

At its heart, monarchy in the Middle Ages was founded on a paradox. For a society to be strong and stable, there was a need for powerful rule, with ultimate authority resting with one man. For a country to go to war, it needed a single, supreme military leader. Arguments between great barons could only be settled if both agreed to submit to the judgement of one superior overlord. Just as there could only be one God, so there could only be one king. The whole structure of political society depended on it. Unfortunately monarchy, and especially hereditary monarchy, was basically a lottery. And when it went wrong, the nature of kingship – supreme, God-given, all-powerful – meant that it was very hard to correct. 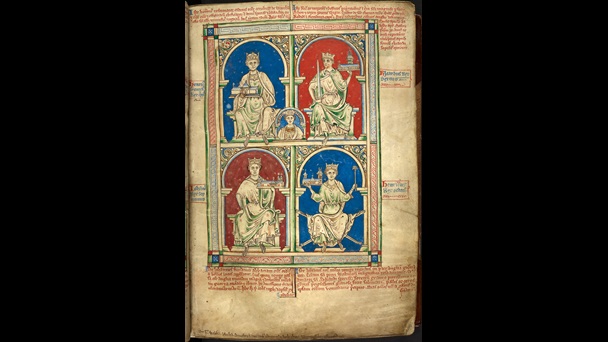 This benign portrait of King John featuring in Matthew Paris’s renowned chronicle of English history contrasts sharply with the hostile treatment John receives in the text of the work.

When kingship worked it was because the king was someone like John’s father, Henry II: energetic, capable, a legal reformer and a talented military leader, who justified his relentless demands for money (and occasional transgressions, such as accidentally ordering the murder of Archbishop Thomas Becket in 1170) with success in battle, conquest and international diplomacy. Henry was far from universally popular in his day, but it was recognised by chroniclers like the Yorkshireman William of Newburgh that he ‘conveyed the impression of a great ruler’. 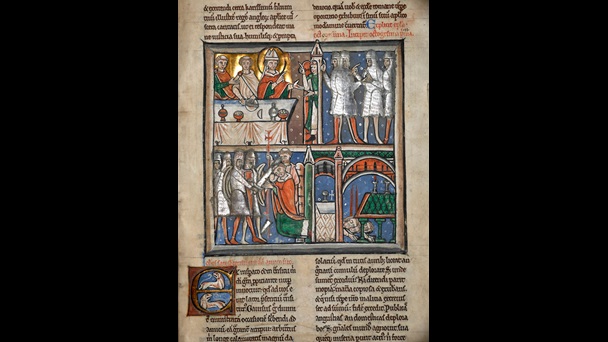 This manuscript contains the first known miniature of the martyrdom of Thomas Becket, depicting the Archbishop struck down while at prayer in Canterbury Cathedral. 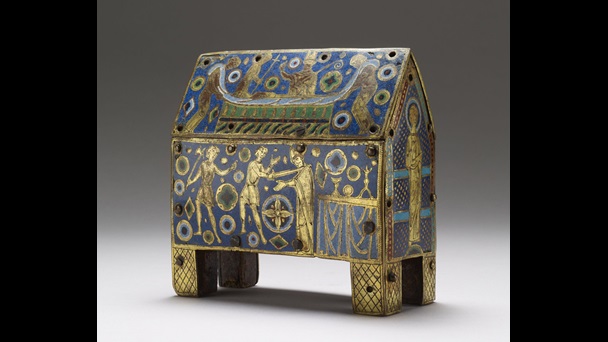 The exterior of this casket is decorated with images of Thomas Becket’s murder, while the interior contained relics associated with the saint. Across Europe, a fascination with Becket’s murder was reflected in the steady trade in relics and representations of his death.

Then there were men like John’s brother, Richard the Lionheart (r. 1189–99): a brutal, reckless, slippery man, but far and away the finest soldier of his age. Richard’s reputation as a crusader made up for the dizzying sums of English silver he pumped into his grand military projects.[2] As king, Richard devoted little interest and even less time to England, the land of his birth and his crown. But he appointed talented ministers who governed the realm competently while he fought overseas, and his reputation throughout the middle ages was as high as it remains today.

It is often argued – rightly – that much of what John reaped in Magna Carta was sown by the kingship of Henry II and that of Richard I. Certainly that was the view of the chronicler Ralph of Coggeshall, who wrote that the charter was aimed at reforming ‘the evil customs which the father and brother of the king had created … along with those abuses which the king had added.’ But Magna Carta cannot simply be explained by reference to long-term historical resentment towards Plantagenet kingship as a whole. Too much of the anger in 1215 was directed personally and specifically towards John. It was a reaction to his kingship. He brought it on himself.

This manuscript includes a rare contemporary account of the papal Interdict of 1208. The original account had been removed and a replacement inserted, perhaps to avoid offending King John.

By virtually all criteria against which medieval kings could be judged, John was a failure. He was a hapless military leader: in the first five years of his reign he lost Normandy and the bulk of the rest of his family’s vast lands in France; in 1214 his allies lost the crucial battle of Bouvines which ended his foreign ambitions once and for all. Kings were expected to protect the Church, yet John had fallen out with Pope Innocent III (1161–1216), who in 1208 placed England under Interdict for five years (prohibiting the people from receiving the sacraments or being buried in consecrated ground) and excommunicated John himself. Kings were supposed to provide justice to their subjects: John had used the royal law and institutions like the exchequer to harass and cow his barons until they paid him grotesque and unfair fines. Kings were supposed to be chivalrous: John was said to snigger at the misfortunes of others, and to molest his subjects’ wives and daughters. Gerald of Wales called him a ‘tyrannous whelp’. Few would have disagreed.

The French conquest of Normandy in Grandes Chroniques de France 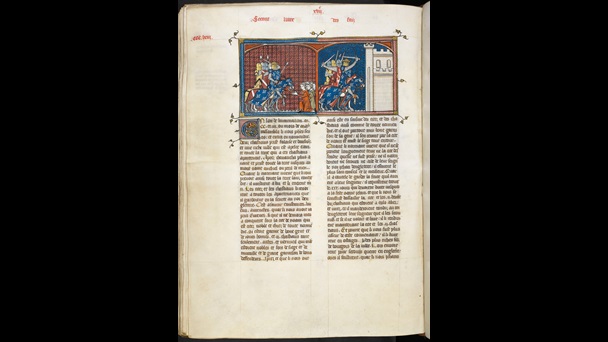 By 1204, John had lost the French territories he had inherited with the throne of England.

Bull of Innocent III taking England under his protection 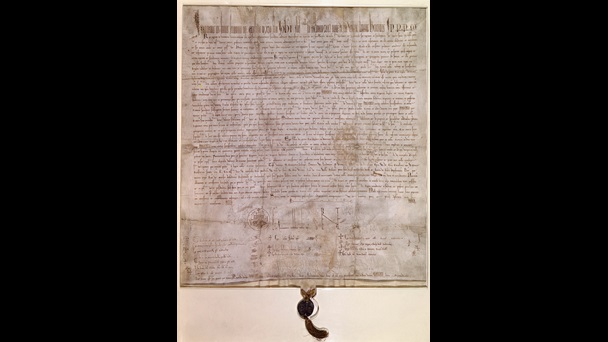 Fearing a French invasion of England with papal support in 1213, King John made peace with the Church by letting the Pope become England’s feudal overlord. In return he secured the Pope’s support, which became crucial in 1215 when the Pope agreed to annul Magna Carta.

Thus, under John was the paradox of medieval kingship exposed. Concentrating universal, supreme power in the hands of one man could yield spectacularly good results when that man was competent, well-intentioned and lucky. Throughout the Middle Ages, English kings like Edward I (r. 1272–1307), Edward III (r. 1327–77), Henry V (r. 1413–22) and Edward IV (r. 1461–83) demonstrated that the system could work. Yet in hands like John’s, it could be disastrous, and kings who failed to live up to their own exalted positions could end up challenged, restrained, deposed and dead. John was far from the only king to experience this baleful chain of events: his descendants Edward II (r. 1307–27), Richard II (r. 1377–99) and Henry VI (r. 1422–61) all went much the same way. What we see in Magna Carta is England’s great men trying systematically and peaceably to solve the problem of defective kingship. They did not fully succeed, but they laid foundations upon which later generations ruled by tyrants and incompetents would continue to build. [1] This quote was from the Book of Wisdom – at that time a book of the Old Testament, although usually omitted in modern editions of the Bible.

[2] Richard’s adventures on the Third Crusade cost in excess of £200,000: the equivalent of roughly ten years’ government revenue. Today that sum would be £6.5tn!