Revealing the secrets of the burnt Magna Carta

One of the four surviving 1215 Magna Carta manuscripts was burnt in the Ashburnham House fire of 1731. Then a failed restoration attempt in the 1830s rendered much of its text illegible. In the charter’s 800th anniversary year, Dr Christina Duffy explains how a new scientific technique known as ‘multispectral imaging’ has revealed text thought to have been lost forever.

The Great Charter was first granted by King John (r. 1199–1216) in 1215. More than one copy was made, so that it could be distributed more easily throughout the kingdom of England. There are four surviving 1215 copies of Magna Carta; two are held at the British Library, one at Lincoln Cathedral, and another at Salisbury Cathedral. The two British Library Magna Carta 1215 manuscripts form part of the Cotton collection, which refers to the library assembled by Sir Robert Cotton (1571–1631). Cotton's library housed one of the greatest collections of Anglo-Saxon literature ever assembled and contains many well-known treasures including the Lindisfarne Gospels and Beowulf. The Cotton collection was bequeathed to the nation by Robert’s grandson, Sir John Cotton, in 1702, and later formed one of the foundation collections of the British Museum (1753).

Magna Carta is written on parchment with iron gall ink. Iron gall ink was the primary ink used in Europe from the Middle Ages right into the 19th and even 20th centuries. While recipes varied greatly, the main ingredients included tannins from oak galls, iron sulphate (also known as vitriol) and water. Ink corrosion is a degradation phenomenon that can occur due to a chemical instability associated with the original recipe. There is very little ink corrosion on Magna Carta, suggesting that high quality ingredients were used. The ink is written on parchment, a material made from animal skin.

The fire at Ashburnham House

On 23 October 1731, a great fire broke out at Ashburnham House, Westminster, where the Cotton manuscripts were temporarily being held. About a quarter of the collection was affected. One of the 1215 Magna Carta manuscripts, the Canterbury Magna Carta (Cotton Charter XIII 31A) was partially damaged in the fire.

Due to the significance of Magna Carta, it is likely that a fine animal skin was used in its production. A well-made parchment has most of the fat removed from the skin by scraping, leaving a dense mat of collagen fibres which are dried under tension. Parchment is very reactive to changes in temperature and relative humidity, and responds to heat and water by deforming. When exposed to heat, the fibres can contract quickly and irreversibly leaving the edges shrunken. 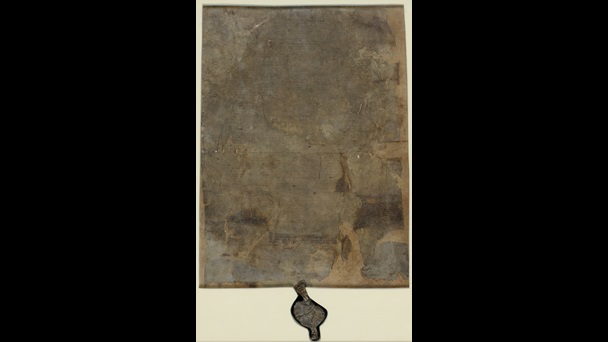 One of the four surviving copies of the 1215 Magna Carta. The document suffered fire damage in 1731, and was further damaged after a failed restoration attempt in the 1830s. The text is now almost completely illegible.

While there is evidence of shrinkage and discoloration of the parchment on the Canterbury Magna Carta, we know that much of the ink was still legible after the fire as a near-perfect facsimile was produced in 1733. The current poor condition of the manuscript is largely a result of conservation techniques used by British Museum Library staff in the 1830s in a restoration attempt. The manuscript was most likely flattened and treated with chemicals which, it was thought, would improve the manuscript’s condition. Unfortunately, these techniques rendered the text almost completely illegible. Some words can be seen with the naked eye, especially towards the bottom of the charter, but even then they are significantly degraded. The British Library therefore undertook multispectral imaging of this document in 2014, to determine whether more of its medieval handwriting could be recovered.

Engraving of the burnt Magna Carta 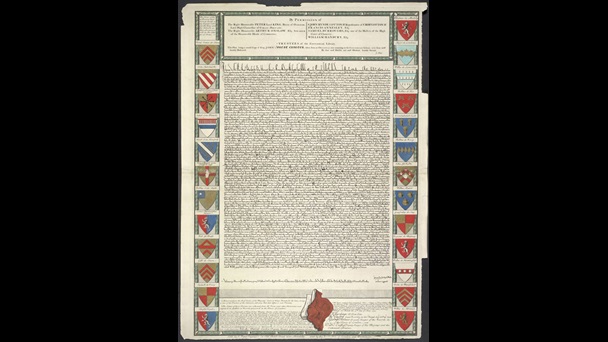 This engraving of the now damaged Magna Carta is evidence that much of the ink was still legible after the fire.

Multispectral imaging at the British Library

The multispectral imaging of the Canterbury Magna Carta was conducted as part of a major project involving the reframing and scientific analysis of all the Magna Carta charters held in the British Library’s collections ahead of the 2015 anniversary. Once the charters were removed from the frames scientific techniques such as near-infrared spectroscopy which allows us to identify and study the chemical makeup of the manuscripts, and high-resolution digital microscopy which enables us to magnify areas of interest, were used to investigate the condition of the ink and parchment as part of the overall condition assessment. With the frames and glass removed there was a rare opportunity to employ the cutting-edge technique of multispectral imaging, enabling us to virtually peel away the layers of damage currently affecting the manuscript.

The British Library multispectral imaging system from MegaVision integrates two previously distinct imaging capabilities: high-resolution photography and multispectral imaging. Multispectral imaging is a non-destructive and non-invasive technique that captures image data at specific wavelengths across the electromagnetic spectrum. The electromagnetic spectrum is the range of all possible wavelengths of radiation, extending from low energy radio waves, through the visible region, and out to shorter and more energetic waves such as X-rays and gamma rays. The human eye cannot detect radiation outside of the visible spectrum. The British Library multispectral imaging system captures images over 14 spectral bands from the near ultraviolet (365 nm) to the near infrared (1050 nm). The spectral bands are created using narrow-band LED illumination that subjects the document to only the light energy that is required to expose the camera's monochrome sensor. 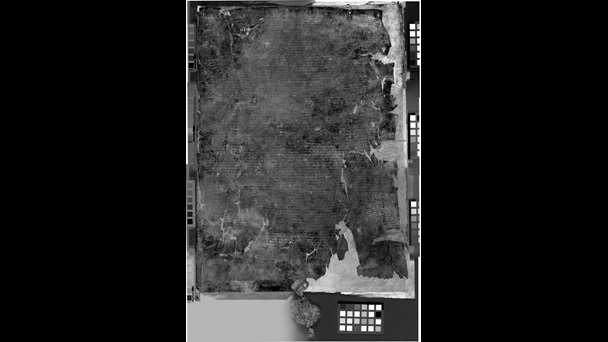 This processed image of the charter was enhanced using multispectral imaging, and reveals text on the burnt copy of Magna Carta which was assumed to be lost.

The camera was mounted directly over Magna Carta, and the charter was illuminated from both sides. Initial analysis of these images suggests that more of the text is revealed under ultraviolet light than any other wavelengths. Lost text appears invisible with the naked eye under normal light, but the difference in how parchment and ink reflect ultra-violet light makes the text legible. Multispectral images of the manuscript under infrared light show the surface features of the parchment allowing us to visualise its physical structure. 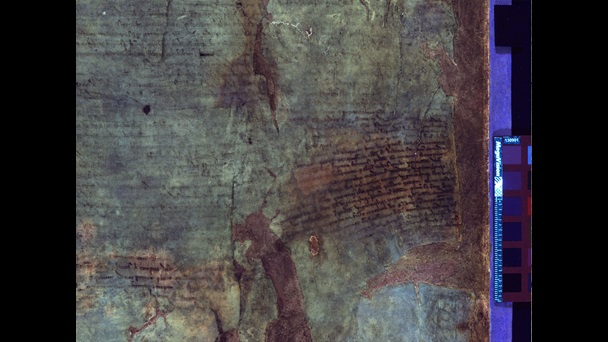 This colour ultraviolet image of the burnt copy of Magna Carta reveals whole sections of text which are otherwise invisible to the naked eye.

Revelations of the multispectral imaging

Although the content of this document is already known from the 1733 facsimile, scholars are interested in examining and comparing the handwriting used on the four original 1215 manuscripts. Similarities or differences in the style could give us clues about the scribe and location of where it was written. Sections of the text have been recovered with multispectral imaging, allowing direct comparison with the same sections on the other three 1215 Magna Carta manuscripts. The Canterbury Magna Carta is the only 1215 Magna Carta still to have the Great Seal of King John attached. The seal was too badly damaged for any information to be recovered with multispectral imaging.

Using this technology and expertise available to us in the 21st century, we are able to preserve Magna Carta for the next 800 years and to present these iconic documents in the best possible condition for visitors who come to see them during the anniversary year. Multispectral imaging at the British Library allows scientists, conservators, curators and scholars to work in partnership, enabling greater access to, and a deeper understanding of, the priceless treasures under our guardianship.