The clauses of Magna Carta

A number of Magna Carta’s core principles are still fundamental to English law, but the majority of the charter’s clauses in 1215 dealt with specific medieval rights and customs. Here Professor Nicholas Vincent provides an overview of the charter’s original clauses.

Magna Carta as agreed at Runnymede in 1215 includes provisions that are still fundamental to English law. Clauses 39 and 40, for example, forbid the sale of justice and insist upon due legal process. From this sprang not only the principle of habeas corpus (that the accused are not to be held indefinitely without trial), but the idea of the right to trial by jury (by the accused’s ‘peers’). Even the presumption of innocence pending conviction can be traced back to the provisions of Magna Carta clause 40. From clause 14 of the 1215 Magna Carta springs the idea of no taxation without representation, and with it the establishment of a common council, duly embodied in Parliament, as a means of obtaining popular consent. Besides such general principles, however, Magna Carta also articulates a number of points that to a modern audience might appear inconsequential or simply bizarre.

Most notoriously here, clause 33 of Magna Carta, still law in England until as recently as the 1960s, demanded the removal of all fish-weirs from the Thames, the Medway and all other rivers of England. Fish-weirs were large V-shaped structures, generally built of wooden stakes, into which fish might swim but from which they could not escape. Since weirs slowed the flow of water, they led to silting and in due course the closure of waterways vital to London’s trade. In this way the extensive use of fish-weirs represented the denial of a rather more general principle: that of free navigation, itself already of significance under Roman law, and in due course a major theme in the debates on British imperial power. The prohibitions of clause 33 were intended first and foremost to benefit the city of London, and also perhaps the Archbishop of Canterbury (who owned substantial property at Maidstone on the River Medway). Nonetheless, viewed as a public asset, the freedom of navigation guaranteed in clause 33 remains, even today, a hotly disputed principle. As a consequence, both in English and in Irish law, this remains one of Magna Carta’s most frequently cited clauses. 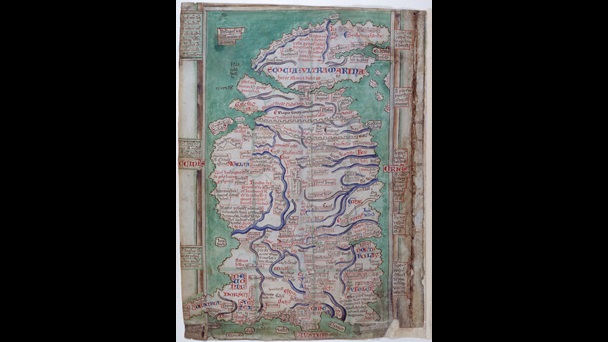 This map was drawn by the 13th-century historian Matthew Paris. His are the earliest surviving maps with such a high level of detail.

Standardization of weights and measures

Clause 35 of Magna Carta demands standard weights and measures for grain, wine, beer and cloth. Once again, the archaic terminology employed here (‘russet’, ‘haberject’, ‘ells’) should not blind us to the significance of the principles covered in this clause. England in 1215 was an economically buoyant land. New towns and new markets proliferated, driven by the continental demand for English wool. For trade to flourish, commercial confidence was essential. To secure this, buyer and seller had to work according to universally agreed measures. It is an intriguing fact that, of all the principles enunciated in Magna Carta, besides those concerning justice and due process, it is this idea that weights and measures be fixed that was most eagerly adopted in the constitutions of the newly fledged colonies of North America. After 1776, the same principle reappeared in the Constitution of the United States. Once again what we find here is a concern for the general public good, not merely for the selfish interests of one particular class or constituency.

Magna Carta as a peace treaty

Much of the Runnymede Magna Carta was, even so, concerned with the specific affairs of royal and baronial forces in the summer of 1215. Hence clauses 57–59, dealing with Welsh and Scottish hostages, and with attempts to appease Welshmen, living on the frontiers of England, in their demand to be tried according to Welsh rather than to English law. Even more specific, alongside the general promise in clause 51 that the King would expel from England ‘all foreign knights, bowmen, their attendants and the mercenaries that have come (to the realm of England), to its harm, with horses and arms’, we find a detailed undertaking in clause 50 to remove from office eight named Frenchmen, together with their brothers, nephews ‘and all their brood’.

The word ‘brood’ here is deliberately disparaging, generally reserved for the kin of peasants. Even so, the men named were far above peasant status. These were the King’s most loyal constables. Like King John (r. 1199–1216) himself, they had been expelled from their French homeland after 1204. In England, through royal favour, they acquired land and status. They were detested by the barons at Runnymede not only as foreigners but because they posed so real a threat to the baronial army. Their names may be unfamiliar today: Engelard de Cigogné, Peter de Chanceaux, Philip Mark. Their offices are nonetheless well known: Constable of Windsor, Constable of Bristol, and most significantly, in the case of Philip Mark, Sheriff of Nottingham. Here, albeit by name rather than by title, Magna Carta names one of the figures later most notorious in the myths and legends of Robin Hood. 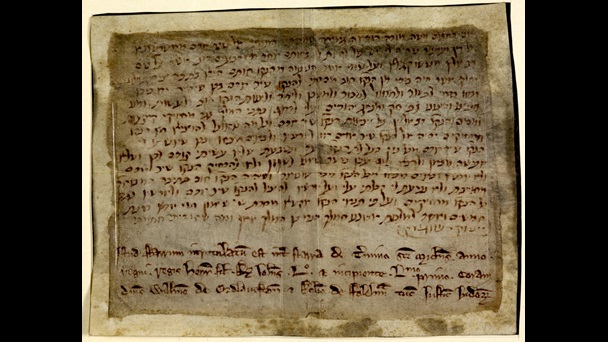 These 13th-century charters record transactions with Jewish moneylenders. Jews performed an invaluable service as usurers in medieval society, a role denied to Christians on religious grounds. However, this made them the subject of widespread resentment.

Magna Carta is often viewed as a radical or even revolutionary settlement. In many ways, however, it can be read as highly conservative, attempting a return to good laws situated in the dim and semi-mythical past. Several instances can be cited of clauses that were reactionary. Clauses 10 and 11, for example, attempt to limit the amount of money payable in interest on debts to the Jews. In an increasingly commercialized economy, the flow of credit was essential to prosperity. Yet the Church forbade Christians to lend money to one another at interest (‘usury’). This in turn derived from the laws of the Old Testament, which forbade Jews to charge for lending money to fellow Jews. Inter-faith loans, on the other hand, were exempted from such restrictions. As a result, money-lending became a significant Jewish enterprise, and the Jews themselves were positively encouraged to act as bankers, not least as a means of bringing further profit to the crown. In the summer of 1215, not only did Magna Carta attempt to put an end to such trade, but there was a deliberate pogrom against the Jewish population of rebel-held London. Here, baronial and popular discontent boiled over into violence, a far cry from what, we are taught, were Magna Carta’s essentially public-spirited or libertarian impulses.

Finally, clause 54 of Magna Carta prohibits any woman from accusing a man of murder or manslaughter, save in accusations that involved her husband. The intention here may have been to improve the efficiency of the King’s courts, disposing of malicious indictments by women, themselves merely acting as agents of other men. Even so, and contrary to other clauses of the charter that seek to protect the rights of widows, heiresses and female orphans, the impulse here was deeply reactionary: to exclude half of the population from judicial procedures henceforth available only to men.