British Library maps curator Tom Harper explores the history of London through its maps, from the beginnings of the London Underground to immigration.

All of them describe London’s geography and topography, but they also represent people – residents, outsiders and visitors. This reminds us that places are as much about those who inhabit them as their buildings, streets and rivers.


London’s Underground is the oldest in the world, with stretches of line dating back to 1863. When Harry Beck’s famous diagram (an inspiration for so many other diagrammatic subway maps worldwide ever since, from Sydney to New York) was printed for the first time in 1933, he was building on 60 years of mapping experience.

How to get there 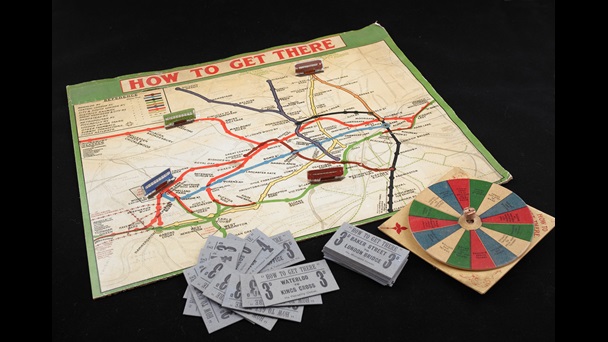 This board game is an actual Tube map, officially printed by Waterlow and Sons, which has been pasted onto thin card. Players pick tickets which tell them where they must begin and end their journeys, and the fare they must pay (no more than a penny or two). Players spin a totem to move; landing on (and remembering to call out) ‘All change!’ entitles a lucky winner to the contents of the booking hall.

The map itself was printed in 1908, the year that London was hosting the Franco-British Exhibition and its first Olympics next door to one another in purpose-built premises in White City (a significant advance for the Olympics, then privately funded). This was also just after three deep level sections of the Bakerloo, Northern and Piccadilly tube lines opened in 1906–07. 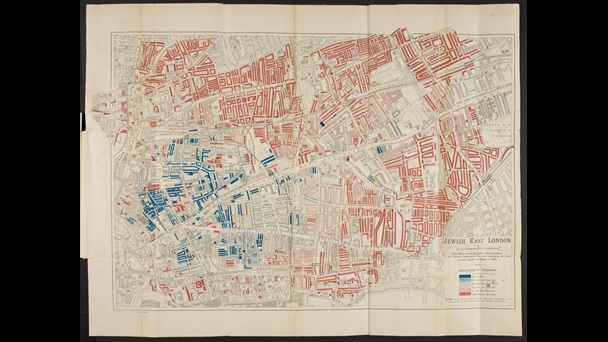 The Jewish demographic of East London in 1900

This map illustrates the density of the Jewish population in London’s East End. It was published in a book entitled The Jew in London, one of many contemporary books that considered the ‘Jewish question’. Published for the philanthropic Toynbee Trust, it takes the form of two essays, one proposing anti-Jewish legislation, the other strongly averse to it.

Prior to the passing of the Aliens Act in 1905 there were no restrictions on immigration into Britain and there existed, mostly in the major port and industrial cities, small but thriving communities from around the world. The Act, Britain’s first permanent control on immigration, was fuelled by fears of mass Jewish immigration from Eastern Europe.

The map of the East End colours buildings to reflect Jewish or non-Jewish occupancy: blue for predominantly Jewish, red for predominantly gentile. Red dominates the map, but given the title it would be easy for a superficial observer to mistakenly assign it to Jewish residents, not non-Jewish. The map therefore creates an unreliable impression of the pattern of Jewish occupancy of the East End. In the 1901 census no more than 18.2% of the Borough of Stepney was foreign-born, of whom fewer still were also Jewish. 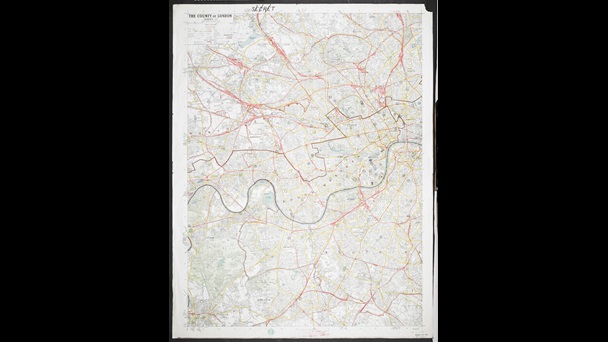 The national industrial strike during from 3–13 May 1926 was huge in scale (involving around 1.5 million workers), with no defined end and, to some, potentially revolutionary in character. The disagreement over pay and working conditions of coal miners led to the Trades Union Congress (TUC) calling out rail and transport workers, as well as those in freight, docks, firefighting and electric power stations. At its root was deep-seated resentment at a lack of social improvement.

This map of London was produced by Ordnance Survey in March 1926 at the behest of the War Office. London was key to the crisis because of the symbolic effect an unaffected capital city gave to the rest of the UK. The slipping of London into complete anarchy was not an option the government wished to entertain.

The map indicates the seriousness the government attached to the threat, and how thoroughly they had prepared for it. The most heavily defended areas – those with the most symbols – are the financial, administrative and commercial centres of the city. But, in addition to the explanation of symbols for rail, roads and boundaries, the key provides an explanation of the extra ‘secret information’: the whereabouts of barracks, territorial units, fire stations and ‘vulnerable points’, such as the temporary milk depot to be set up in Hyde Park.

The map is labelled ‘secret’ and ‘confidential’ by the War Office, and was not commonly known about until 1995. 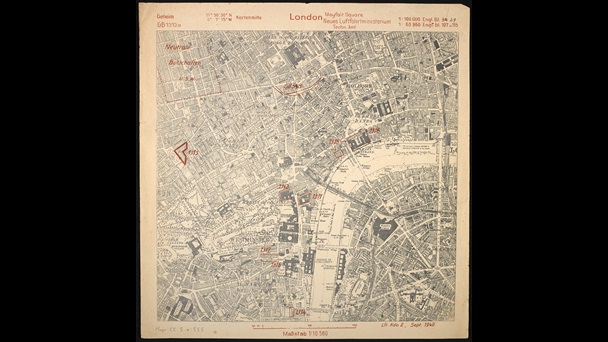 A map of Central London adapted for Luftwaffe use

From 7 September 1940 over 3,000 sorties, mostly at night, were flown by the German air force (Luftwaffe) against London. This was ‘The Blitz’, the aerial bombing campaign upon British urban centres, which reduced many to rubble. The Luftfahrtministerium made great use of Ordnance Survey mapping in identifying strategic military and utility targets, reproducing them in sonderfolger (special instruction manuals) for the use of bombing crews.

This map of ‘Mayfair Square’ labelled Lft. Km. 2 (for the squadrons of Luftflotte 2) and dated September 1940, is an extract from Ordnance Survey’s six inch map of London published in 1921. Having been photographically transferred, it was overprinted in red to provide data and target outlines.

The targets include the War Office, Admiralty and Somerset House (which housed Admiralty staff). These are joined by the large building to the south east of Berkeley Square. This is the vast Air Ministry Building which was completed in 1938.

A large area of Belgravia populated by embassies is labelled ‘Neutral Botschaften’ highlighting places to avoid bombing to prevent provoking neutral states (such as the USA at the time) from entering the war. 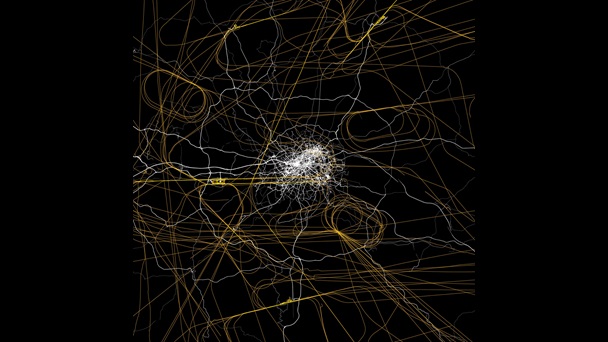 16 years of movement around Greater London

From the 1990s, GPS technology became increasingly available to civilian use, most prominently in car navigation. Following on from a 20th century in which more people read maps, maps were increasingly able to read people and predict their movements.

Artists came to appreciate the use of GPS for capturing, commemorating and commenting upon patterns of existence. Jeremy Wood pioneered drawing with GPS, using a receiver to track his movements, using his body as a ‘geodesic pencil.’

This print shows 16 years of Wood’s movement around Greater London. The beautifully complex white lines represent his movement by foot, bicycle and motorised transport, the yellow lines by aeroplane. These flight-paths have an unusual precision which contrasts with intricate patterns following streets. Lines occasionally abruptly stop, reminding us that even digital mapping can occasionally fail.

Wood’s work highlights an aspect of map use which is generally overlooked in favour of their use for way-finding – that of reflection. People look at maps as much for recollecting where they are and where they have been as where they wish to go. Map-reading and map-making are therefore key ways in which we look to understand ourselves. We are strongly bound to places.

London, as with every city, is defined as much by people as much as its buildings and road layouts.