Dr. Barbara A. Bond introduces the MI9's emergency escape and evasion mapping programme and shares the fascinating stories of secret maps used by prisoners of World War II and the contribution they made to victory.

MI9 was created on 23 December 1939. The Branch was charged with facilitating the escape of British prisoners of war (PoWs), their return to the UK, collecting information on escape and evasion, training service personnel on escape and evasion techniques, maintaining the morale of PoWs, and maintaining contact with them during their captivity. In itself, this represented a fundamental shift in military attitudes. Prior to WWI, capture and captivity in enemy hands had been regarded as a somewhat ignominious fate. However, experience of escape attempts during the Great War had resulted in a marked shift in attitudes. The value of MI9’s new philosophy of ‘escape-mindedness’ was clear: not only did it boost the morale of both families and comrades when the successful escapers made it back to these shores, it served to engage enemy resources in seeking to prevent the escapes and trying to catch the escapers, it maintained the morale of the PoWs in the camps who knew that their escape committees were in contact with MI9 and kept the PoWs occupied in planning and executing every aspect of escape. And in the final analysis, the escapers could often provide valuable intelligence on the state of the enemy’s war machine.

MI9 took an early decision to embark on a mapping programme and determined that those maps should be on silk. There were good reasons: silk is flexible and durable, in a way that paper is not and it is noiseless when hidden about one’s person. MI9 was not, however, the first to discover the efficacy of silk or fabric for military purposes. The oldest extant military map in the world was excavated in 1973 from the Han dynasty tomb in Mawangdui, China: it dates from the 2nd century BC and it is on silk.

Brigadier Norman Crockatt headed MI9 throughout its existence and set out the Branch’s philosophy of ‘escape-mindedness’ which became the focus of the training programme. It was every man’s duty to try to escape and MI9 would do everything they could to support them in that endeavour. One of the earliest appointments Crockatt made was Christopher Clayton Hutton as his Technical Officer. Hutton was essentially the boffin, the inventor of aids to escape and the man who established and master-minded the mapping programme until 1943 when he retired on health grounds. The earliest and by far the largest group produced by MI9 were the maps based on the commercially available mapping programme of Europe, the Middle East and North Africa created by the renowned Edinburgh company, John Bartholomew & Son Ltd. The maps were small scale (generally 1:1M through to 1:6M), printed in three colours and carried arbitrary sheet numbers (Arabic numerals and/or alphabet letters). John (known as Ian) Bartholomew worked covertly with MI9. Having seen active service and been decorated in WWI, he decided to waive all copyright for the duration of the war, regarding it as a privilege to contribute to the war effort. MI9 went on to print over 300,000 copies of some 44 maps, so John Bartholomew’s contribution was considerable. 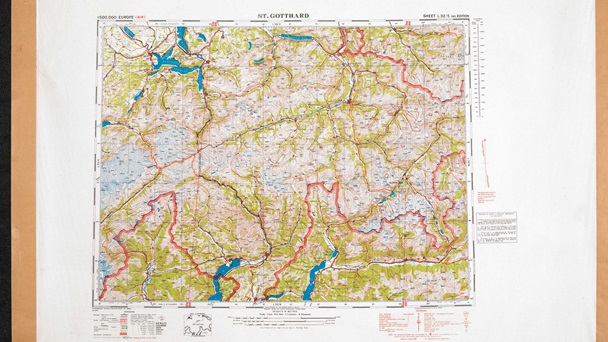 Example of a silk map; the thin material allowed the maps to be concealed in clothing or smuggled into camps in inconspicuous objects

There were a number of other identifiable groups of maps produced covertly for escape and evasion purposes under MI9’s direction. For example, 74 sheets of the military map series GSGS 3982 were printed on silk, rayon or tissue as 1:500,000 scale reductions of the operational air series of Europe at 1:250,000 scale and were therefore often described as ‘miniatures’ or ‘handkerchief maps’.

Similarly, 33 sheets of the military map series GSGS 4090 at a scale of 1:100,000 of Norway were printed on silk. In the latter part of the war, three further groups of small scale maps were produced by MI9 on rayon. These were generally at 1:1,000,000 scale of Europe, Scandinavia and the Far East theatres of war and like the majority of maps in the MI9 E&E mapping programme, they carried arbitrary sheet numbers 43, 44, FGS. They were all based directly on the International Map of the World, cut and panelled together, including larger scale insets of those border areas in Europe which were part of MI9’s organised escape routes. Large scale plans of some of the Baltic ports were also produced to facilitate escape from the camps in Europe onto Swedish ships for passage to Sweden, and a safe route home from that neutral country. This escape route was, in fact, the most successful of all the MI9 escape routes. 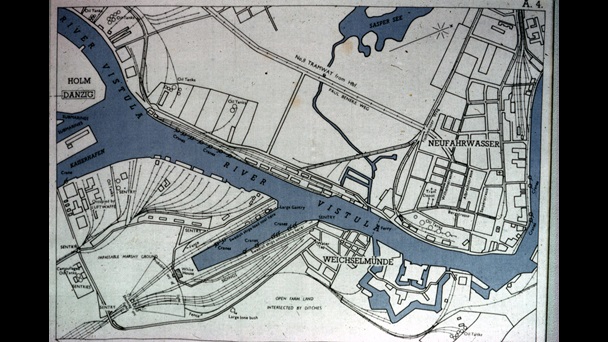 Producing the maps was all very well, but how was MI9 to get them into the camps? The answer was that they resorted to that centuries’ old British practice of smuggling.

They persuaded the manufacturers of such leisure items as board games, playing cards, chess sets, gramophone records, dart boards, table tennis and cricket bats to help them hide the maps inside such items during their manufacture.

One of the earliest companies to help MI9 with the printing of the silk maps had been John Waddington & Co. of Leeds. They also happened to hold the licence in the UK of the US board game, Monopoly. This was fortunate as they were able to start manufacturing the boards with maps secreted in them. Using Monopoly as a host carrier was useful as actual currency could be hidden with the Monopoly money since escapers did need local currency if their attempts were to stand any chance of success.

MI9 also approached EMI, the gramophone record company. One of the processes involved in their production was dry lamination which meant that maps could be hidden inside the record. MI9 ensured that the records which were to carry the maps did not include music by Jewish composers, as these would quickly have been confiscated by the German censors. They also demonstrated their tendency to black humour. It was not lost on them that, although the records were playable, they had to be broken apart to retrieve the hidden maps, and so they referred to this as Operation Smash-Hit!

The Geneva Convention allowed for the delivery of parcels to be sent to the camps for the PoWs from both the Red Cross and their families. MI9 vowed that they would never compromise either of these by sending their escape materials hidden inside their parcels and they never did.

MI9 invented entirely fictitious cover organisations such as the Licensed Victuallers’ Sports Association, the Prisoners’ Leisure Hour Fund, the Ladies Knitting Circle, The Jigsaw Puzzle Club. Each of these had headed notepaper and apparently real, but fictitious addresses. The Germans also proved to be helpful in allowing the PoWs to send back signed receipts for the parcels, which allowed MI9 to track what was getting through, in what volume, and to which camps.

MI9 was able to establish a system of coded correspondence with the camps and the author has successfully deciphered some of those letters from the personal archive of a young naval lieutenant to which she was afforded access. The clue to a coded letter lay in the form of the date. If the date was abbreviated to numbers only, it signified that the letter contained a coded message which varied from requests for maps and currency to the provision of intelligence, for example, the location of munition dumps, the state of the enemy’s war machine. By December 1941, MI9 had established a network of over 900 coded letter writers in the PoW camps and the passage of coded letters backwards and forwards between MI9 and the camps could reach over 100 in any single month.

One of the most famous escapes in WWII was that of Lieutenant Airey Neave of the Royal Artillery. He was captured when the Germans over-ran northern France in 1940 and, because of his repeated escape attempts, he was eventually sent to Colditz. Remembered as the first British officer to escape successfully from that infamous camp, he joined MI9 on his return to London in March 1942 and spent the rest of the war working closely with Colonel Jimmy Langley, seconded from SIS, and others organising the escape lines in Western Europe. The map to which he undoubtedly had access is amongst the rarest of all the extant escape and evasion maps produced by MI9 and is on display in the Library’s Maps and the 20th Century: Drawing the Line exhibition. It is a large scale (1:100,000) map of the Schaffhausen Salient, a section of the German-Swiss border selected by MI9 as a crossing point for escapers to reach neutral Switzerland, where they were handed over to the British Military Attaché for safe passage home. 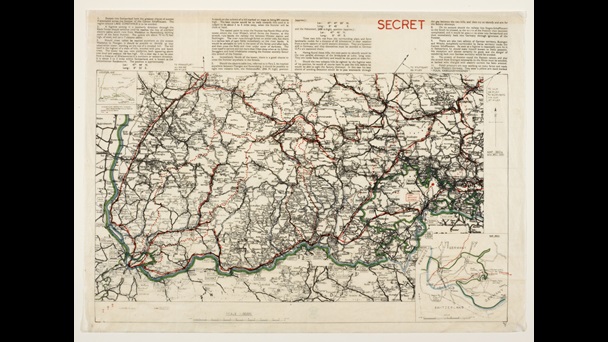 By the end of the war and before the PoW camps were liberated in 1945, almost 36,000 men who had either been shot down and evaded capture or who had been captured and subsequently escaped, had arrived back in the UK: that number represents over three Army divisions. Whilst it cannot be assumed that MI9 directly aided each and every one of those 36,000, what can be said is that MI9 created the philosophy of escape-mindedness, worked tirelessly to inculcate it into all three services, and ensured that everything possible was done to aid escapers and evaders, not least through a very significant mapping programme, conservatively estimated at 1,750,000 copies of 243 individual maps.

Discover the story of the escape and evasion mapping programme in Great Escapes: the Story of MI9’s Second World War Escape and Evasion Maps by Dr Barbara A. Bond.