The life and legacy of MacDonald Gill

Caroline Walker and Andrew Johnston lift the lid on 20th-century cartographer MacDonald Gill. Learn about his life and career including his wartime maps and pictorial revamp of the map of the London Underground.

The revival of the decorative map in the 20th century is often attributed to MacDonald 'Max' Gill, the younger brother of typographer Eric Gill. Although his painted maps would decorate the homes of wealthy landowners, prominent public buildings and Cunard liners, it was Gill’s poster maps that brought him fame.

In the first half of the 20th century – the golden age for poster art – his poster maps spearheaded major publicity campaigns for such institutions as the London Underground and the Empire Marketing Board (EMB). However, Gill was also an architect, letterer, mural painter and commercial artist.

Born in Brighton in 1884, Leslie MacDonald Gill was the third of 11 surviving children of a non-conformist minister and a professional singer. Encouraged by his father, a keen amateur artist, Gill began drawing and painting at an early age with early subjects including local buildings and locomotives.

In 1897 the family moved to Chichester and two years later to Bognor, where 16-year old Gill completed his education and trained with a local architect.

In 1903 he joined the London firm Nicholson and Corlette, ecclesiastical architects in Lincoln's Inn. Meanwhile, evening classes at the Central School of Arts & Crafts under the tutorship of calligrapher Edward Johnston inspired a passion for Roman lettering which was soon put to use on private commissions for sign-painting and memorials, including collaborations with his brother Eric.

In 1908 with his reputation as an architect and lettering artist now established, Gill set up his own practice.

The following year, Arts and Crafts architect Edwin Lutyens commissioned him to design a wind-indicator map (a map with a moving indicator which shows the wind direction, linked to a weather vane) for Nashdom, a neo-classical mansion in Buckinghamshire. Embellished with gold leaf and heraldry, the panel depicts the house and its neighbourhood encircled by compass points painted in elegant Roman italics, setting a distinctive style that distinguishes Gill's maps from those of future rivals.

Other painted maps followed – a splendid example at Lindisfarne Castle depicts the defeat of the Spanish Armada.

The Wonderground Map of London Town

Gill’s career took a new direction in 1913 when Gerard Meynell of the Westminster Press introduced Gill to Frank Pick, Commercial Manager of the Underground Electric Railways of London (later London Underground) to discuss a pictorial poster map to entertain passengers as they waited for their trains on the gloomy station platforms.

Published in 1914, By Paying Us Your Pennies – or the Wonderground Map of London Town, as this colourful cartographic icon became known – presents a bird's eye view of the city, peopled with characters from every walk of life making quips and puns about the capital’s street and place names. 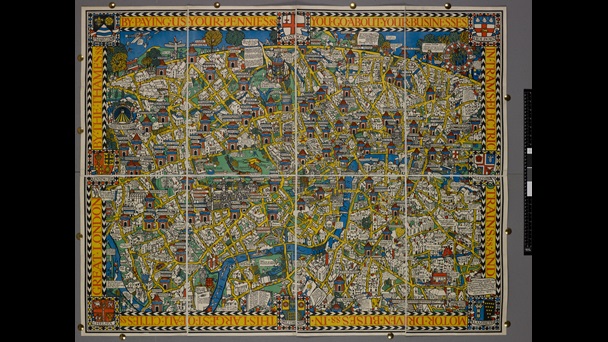 As well as further pictorial maps, Frank Pick later commissioned Gill to design a new London Underground system map. This was the first to remove background detail, including the River Thames.

Gill’s work during World War I

During World War I Gill worked primarily as an architect on a pioneering agricultural estate project in Dorset. He also designed the alphabet for the British military headstone, which is still in use today. In the post-war years he designed numerous inscriptions and memorials, including rolls of honour for several Oxford colleges.

Of the many poster maps Gill created in the 1920s, perhaps the most remarkable map was Highways of Empire, a 20ft x 10ft hemispherical projection of the world. Produced in 16 sheets, this was the largest poster ever produced at that time and required specially-built hoardings.

It was commissioned by the newly-formed Empire Marketing Board (EMB) to bolster the links and promote trade with the colonies, who were beginning to push for independence. With Britain at its centre, the map depicts the extraordinary extent of the British territories and their maritime links, with modern steamships plying the waves alongside medieval-style sea monsters.

It also includes a pair of confused polar bears wondering why they have been misplaced at the South Pole – a typical example of Gill’s engaging sense of humour.

Unveiled to great acclaim on New Year's Day 1927, this eye-catching map attracted crowds on Charing Cross Road, London where even the traffic was brought to a halt. It was the first of eight posters he created for the EMB.

By the mid to late-1920s Gill was at the peak of his career. He was painting boardroom maps for companies such as W.H. Smith, while eminent men of the time, including the Prime Minister Lloyd George, commissioned panel maps for their country retreats.

Perhaps the most important painted map of the inter-war years was his Art Deco-style Map of the North Atlantic (1936) on the iconic liner R.M.S. Queen Mary. Ever versatile, Gill also designed a large tapestry map for South Africa House as well as a pair of circular coloured glass maps for Imperial Airways.

His mural painting was also in demand. The chancel of E.S. Prior's remarkable Arts and Crafts church of St Andrew's in Roker, near Sunderland, is decorated with Gill's dazzling depiction of the Creation. 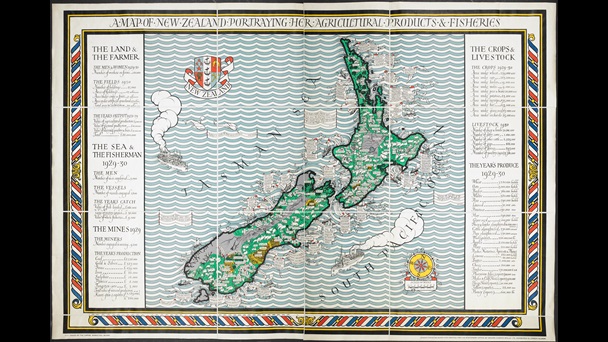 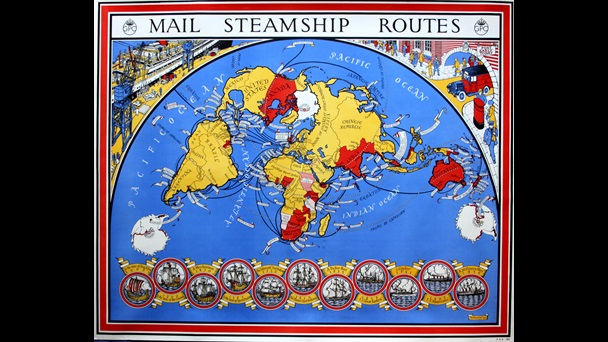 Meanwhile, Gill was also promoting that traditional British beverage, tea. For the Ceylon Tea Board he designed a map with lively depictions of the country’s flora and fauna in relation to the tea industry, while for the International Tea Market Expansion Board he created two posters. The first was A Great Industry: Where Our Tea Comes From (1937), depicting maps of the tea-growing countries which supplied Britain's tea. The second was Tea Revives the World (1940), a 20ft x 10ft map packed with historical and literary references about tea as well as amusing trivia such as that 'The famous Dr. Johnson would drink 16 or more cups of tea at a sitting'. 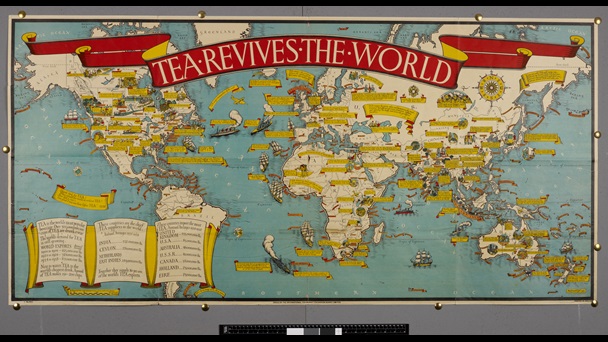 Gill's map celebrates the origin and culture of tea

During World War II the Ministry of Information commissioned three posters showing the importance of the natural resources of Canada & Newfoundland, New Zealand, and Australia.

The best-known of Gill's wartime maps, however, is the Time and Tide Map of the Atlantic Charter (1942). This commemorated the 1941 joint declaration of US President Franklin D. Roosevelt and British Prime Minister Winston Churchill, which set out their war and peacetime aims.

When the war ended in 1945, the Atlantic Charter became the template for the newly-formed United Nations, and Gill’s map was revised to celebrate the birth of this new institution with its idealistic goal of world peace.

Map of the Atlantic Charter 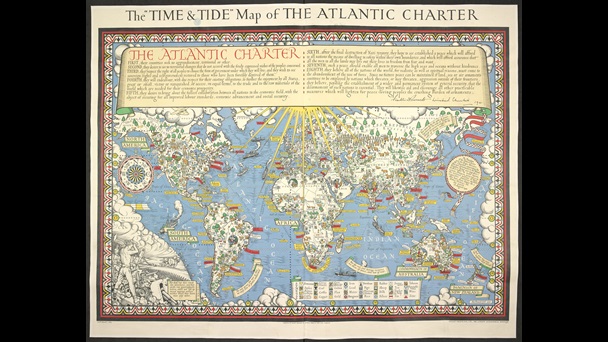 This map celebrated the 1941 agreement between the USA and Britain, setting out their joint war aims

In the post-World War II period Gill completed one final poster – the Cable & Wireless Great Circle Map, a colourful representation of the cable and radio telecommunication links spanning the globe from its centre, Great Britain.

This map points to the future, showing the dawn of the internet and the electronic revolution that was to transform the modern world.

Gill’s last painted map was for R.M.S. Queen Elizabeth in 1946. Shortly after completing this, he was diagnosed with cancer and died a few months later on 14 January 1947.

Clues to Gill’s map-making philosophy can be found in Globes and Maps, a paper he read at the Art Workers’ Guild in 1931, where he deplores ‘the sharp contrast... between the inspired maps of the 15th, 16th and 17th century and the modern uninspired commercial map of today.’

His innovative approach to map-making bridged that chasm. In the fascinating pictorial worlds he created, star-studded heavens, galleons and sea monsters rub shoulders with steamships, pit-heads and pylons of the modern technology-driven era.

Never afraid of a cartographic challenge, Gill enjoyed making maps on all manner of materials, from traditional surfaces such as paper, plaster and wood, to the more unusual media of tapestry, glass and film.

Gill left a remarkable legacy of work ranging from houses to heraldry, manuscripts to murals, inscription to illustration, lettering to logos, and, of course, his distinctive decorative maps with their imaginative light-hearted touch.