What is a fantasy map?

The British Library’s map curator, Tom Harper discusses the existence of fantasy maps created in the 20th century, containing a mixture of real-life and imaginary influences.

Maps do not have to show real places. The Harry Potter Marauder’s map or Robert Louis Stevenson’s Treasure Island chart are undeniably imaginary, but emphatically maps. Fantasy maps have come to be associated with literary fiction, but this has not always been the case.

We naturally distinguish between places that are real and those that are fantastical or imaginary. The problem is that the distinction is not clear-cut. Maps can contain a mixture of both the real and the imaginary.

For example, all manner of historical and mythical things coexist within the frames of medieval world maps. In the Psalter world map of 1265, events from the Alexander Legend rub shoulders with those from the Old and New Testaments and from the Roman author Pliny’s Natural History. 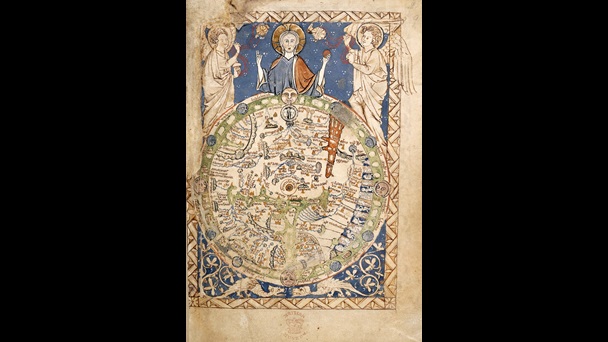 The combination remains present half a millennium later in the maps of Jonathan Swift’s Gulliver’s Travels (1726) where mythical islands including Lilliput lie south-west of Sumatra in South Asia.

Map of Lilliput and Blefuscu 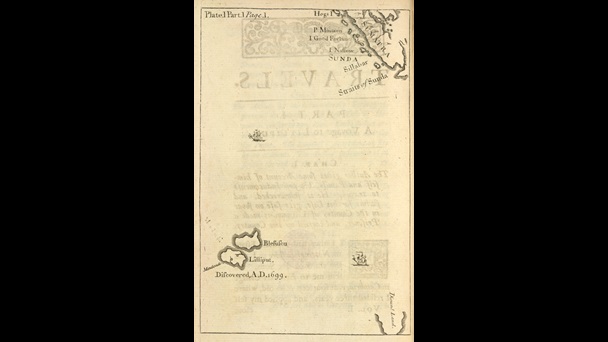 Fantasy maps increased in number during the 20th century due to the rise of science fiction and fantasy writing, and the birth of television and video games.

Many of them are products of the wildest imaginations, and are immersive places of escapism. Yet all of them retain vestiges of the ‘real’ world in which they were created – whether because of a particular feature illustrated in it, the way in which it has been drawn, or even the ‘real-world’ contexts which inspired it. As the nine examples demonstrate below, fantasy maps aren’t so imaginary after all.

An ancient mappe of Fairyland Fairyland is a place of fantasy, literary imagination and make-believe

An ancient mappe of Fairyland… was published in 1918, the year that World War I ended, so it is difficult not to relate the two in some way. Could the Fairyland constitute a yearning for a return to pre-1914 Edwardian innocence? Compared with the devastated, bomb-blasted landscape of northern France, this vision of a make-believe land may have seemed a seductive escape for a European society bearing the physical and psychological scars of mass conflict.

Its author, Bernard Sleigh was a decorative artist and craftsman associated with William Morris and the Pre-Raphaelite Sir Edward Burne-Jones. The map is very much a product of the Arts and Crafts ideology which evinced a return to traditional, pre-industrial production methods.

The ornamentation and typeface is in the style of Morris’ Kelmscott Press. This retrospective stylistic attitude places the map in opposition to a mechanical modernity, which happened to have reached its most destructive pinnacle during the War.

Hundred Aker Wood by E.H. Shepherd is one of the most famous fantasy maps. It first appeared in A.A. Milne’s collection of Winnie-the-Pooh children’s stories in 1926. Drawn as if by the child narrator Christopher Robin, the map shows the imaginary setting of the tales of Pooh, Piglet, Kanga, Rabbit and Owl. As an illustration on the endpapers of the books, the map was quite possibly the first map that many children would have seen. This may explain why so many people retain fond memories of it.

Hundred Aker Wood cleverly imitates the style of a child – Christopher Robin – which is confirmed by the sentence ‘Drawn by me and Mr Shepherd helpd’. The labels are awkwardly written and full of misspellings. Clearly, Shepherd intended for the map to acquire a reality of its own, which in turn was meant to reinforce the believability of the stories. Shepherd could not resist a few jokes, including the four points of the compass spelling out P-O-O-H.

Despite its status as one of the most memorable fantasy maps, the setting was inspired by a real place – Ashdown Forest in Sussex, near where Milne lived, and a place which he took Shepherd to explore. You can imagine the clump of very well-drawn trees in the middle of the map as having been sketched by the artist during one such excursion.

The map of peace 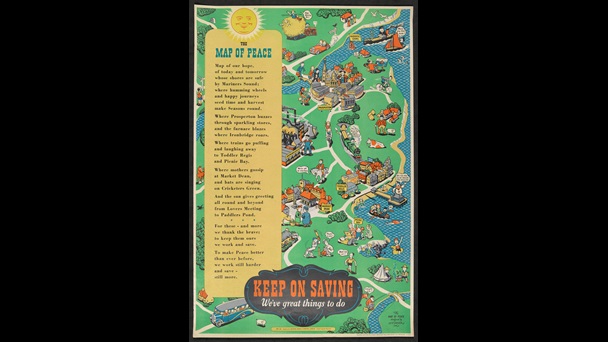 This Map of Peace shows an imaginary and idealised version of England. The town of Market Dean could be substituted for any historic market town, while Prosperton contains a mixture of civic, historic and modernist architecture, a church, shops and a cinema, a Birmingham or a Leeds.

This idealised England is a green-and-pleasant land populated by smiling faces and cricket, trade, holiday excursions and happiness. In reality, in 1945 Britain had emerged from six years of war. Despite the euphoria of victory, towns and industry were damaged, rationing remained in place, and happiness was at a low ebb.

The fantasy land shown in the map was intended to remind people of their own surroundings, but most importantly, what they wanted them to become.


Lord of the Rings map of Middle Earth

Map of the Middle Earth 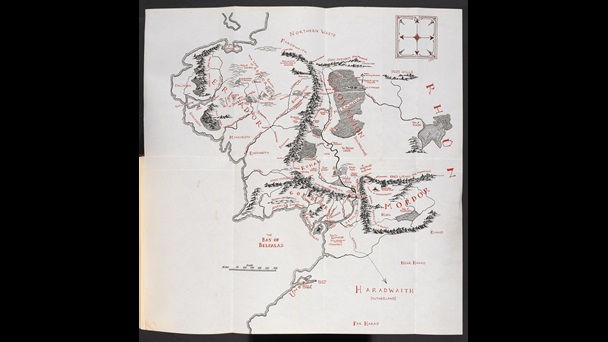 Tolkien’s Middle Earth map, though literary and imaginary in content, retained vestiges of the ‘real’ world in which it was created.

Tolkien was no geographer. He was an Anglo-Saxon scholar and Oxford professor, who from 1917 had been working on a pre-history of the world to compensate for what he felt was the lack of a half-decent one in the English tradition.

He cleverly used the map to reinforce the reality of Middle Earth, having it hand-drawn in ink with pictorial detail and flowing script so that it appeared a product of his mythical world. The geography of Middle Earth was broadly similar enough to Europe – in coastal shape anyway – to support the pre-historical illusion.

Tolkien’s own anti-urban, pro-rural ideology which shone through in the ecological sub-theme of the book (talking tree-shepherds attacking industrialist wizards, to name one episode) made his work extremely popular in the 1960s.


Alicante as we’ve never seen it before A folding map of Alicante produced for British tourists in 1957

At the same time as Tolkien was creating fictional worlds from his imagination, real places were being given fantastical facelifts. The publication of this Alicante map coincided with the first package holidays being offered from Britain thanks to cheaper air travel and higher wages. The British were attracted by the image of an unspoilt paradise, sunny weather and golden beaches conveyed through state-produced literature and brochures. 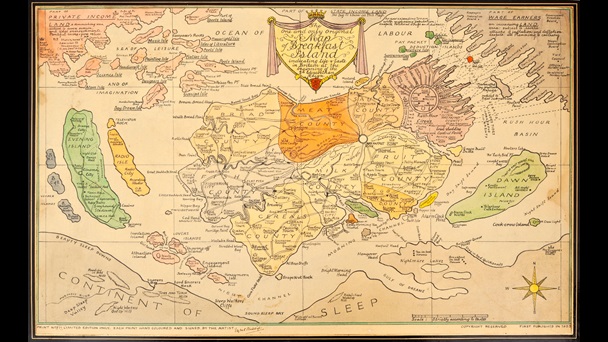 The map of Alicante comes from a period named the ‘Golden Age’, where British economic prosperity enabled people to afford consumer goods and holidays. This allegorical fantasy map provides a snapshot of the Britain of five years earlier that had finally emerged from the shadow of World War II. The popular feeling that breakfast was the most important meal of the day is borne out by the map.

Various workplaces and activities are shown, making the map a snapshot of the social and political life of Britain ‘at the beginning of the 2nd Elizabethan reign’. The young Queen’s 1953 coronation had provided a sense of national optimism that was matched by the ending of food rationing. Eggs, cream and sugar were taken off rationing that same year. Given this, the tone of the map can be taken as one of optimism.

Despite the fictional nature of the land, in many ways Breakfast Island is one of the most true-to-life of all the maps described here, because it illustrates aspects of society and its conventions often hidden within maps. 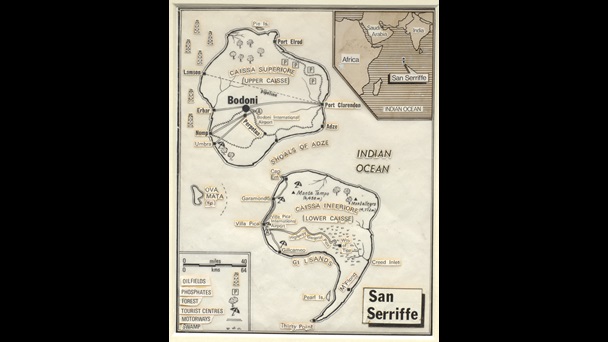 Geoffrey Taylor’s San Serriffe map contains vestiges of the real world. On reflection, this April Fools’ Day hoax was ludicrous. A second look at the map shows two islands bearing a remarkable similarity to a semi-colon. ‘Sans serif’ is, of course, a particular form of letter type. The typographical theme continues in the names of the islands (Upper Caisse and Lower Caisse), and in the articles, where for example, we learn of the national bird, the Kwote.

The islands appeared at the right time, in the right place, and reflected particular post-colonial Britain’s perceptions of what a small faraway island might be like. And very appropriately, in the age of factual travel programmes and magazine supplements, people contacted The Guardian’s offices on 1st April with holiday booking enquiries.

All places have an element of fantasy about them, especially when they are shown in maps, because maps are the interpretation of a place by an author and therefore must be in some way ideal. The further back one goes the less easy it is to distinguish real places from fantastical ones, as fact and legend meld together.

Yet in the 20th century we find vestiges of reality hidden within fantasy maps, and they are an excellent way of discovering how people felt about the real world.