Manuscripts containing commentaries on the book of Psalms were widely circulated during the medieval period. Tuija Ainonen and Kathleen Doyle examine some of these glossed volumes.

One of the most fascinating groups of manuscripts from The Polonsky Foundation England and France 700-1200 collaborative project is the collection of 26 illuminated Psalters and 20 Psalter commentaries.  Psalters contain the Old Testament book of the Psalms, typically with other liturgical and devotional material such as a calendar, Canticles, a litany and other prayers.  Like the majority of texts in Western Europe in this period and the overwhelming majority of manuscripts featured in the project, most of these Psalters are written in Latin, in one of the three translations (Romanum, Gallicanum and Hebraicum) traditionally ascribed to St Jerome (b. c. 347, d. 420).  From an early date, these Latin texts were glossed by the addition of words and phrases to help interpret their meaning.

Glosses in surviving manuscripts often include vernacular translations, added above the relevant Latin word.  English glosses were added to Psalters from the 8th century onwards.  Early translations in Anglo-Norman French occur too.  Indeed French Psalter translations, glosses and commentaries together form the most substantial group of vernacular romance literature until the end of the 12th century.  The Arundel Psalter is the only 12th-century example of an interlinear French literal gloss on the Gallicanum version of the Psalms. The manuscript may have been produced in the Benedictine abbey of St Peter, St Paul and St Andrew in Peterborough.

Psalter with an Anglo-Norman gloss 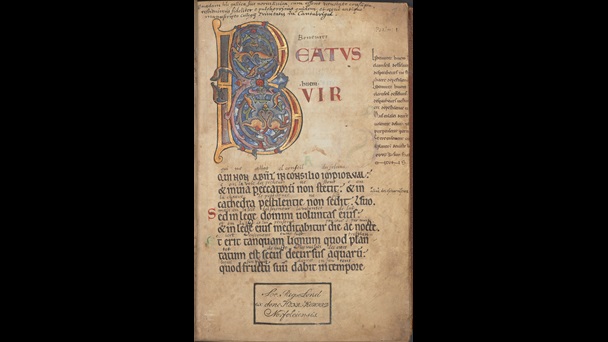 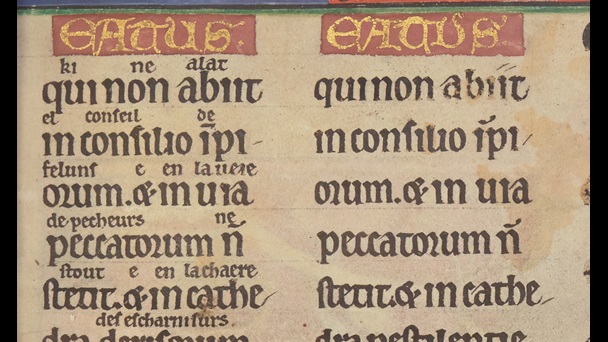 In the Canterbury Psalter, the largest column of the Latin translations, the Gallican version, is surrounded by a gloss in Latin.  This gloss is not a translation, but rather a commentary in the form of short explanations and comments on the biblical text. Typically, such glosses consist of words or phrases referring to passages in the commentaries of Church Fathers, such as St Jerome (d. 420) and St Augustine (d. 430).  A number of surviving manuscripts feature this type of gloss, in a variety of versions and of formats.  Early glosses, such as the translation glosses, were presented as interlinear words and comments.

School of Laon and the Glossa ordinaria

In the early 12th century, a series of glosses was developed in the cathedral school of Laon by the renowned teacher Anselm (d. 1117), and his younger brother Ralph (d. c. 1133).  The gloss was compiled for at least two sections of the Bible: the Psalms, and the Pauline Epistles. For the Psalms, the glosses were drawn primarily from the commentaries of St Augustine and of Cassiodorus (d. c. 585).

In format, these glosses are arranged marginally and interlineally around the central biblical text.  They are sometimes known as the Glosa parva (small gloss), the version laonnoise, or more simply, as the ordinary gloss or the Glossa ordinaria. An example of this type of gloss appears in a Psalter, produced in eastern France during the second half of the 12th century. As far as we can tell, the manuscript has not been the subject of any published research since its acquisition by the British Library in 1868.

Psalter with a Latin gloss 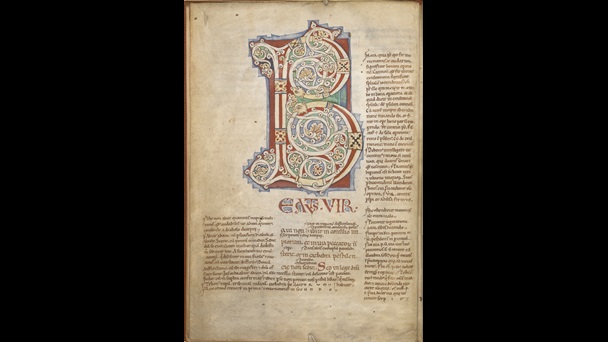 A second format of a gloss commentary on the Psalms was developed by Anselm of Laon’s student, Gilbert of Poitiers (d. 1154), who was active at the schools of Laon, Chartres and Paris before becoming bishop of Poitiers (1142–1154). He presented an extended gloss on the Psalms to his teacher Anselm of Laon for correction some time before Anselm’s death in 1117. This version is sometimes known as the Glossa media or media glosatura (intermediary gloss) although probably it was completed and circulated simultaneously with the Glossa ordinaria from Laon.

An early copy of Gilbert of Poitiers’ commentary (now British Library, Harley MS 4804/1), shows continued interest in his work. A Greek text of the Psalms was added in one of the lower margins of the manuscript by the Italian humanist Zomino of Pistoia (b. 1387, d. 1458).

Gilbert of Poitiers, Commentary on the Psalms 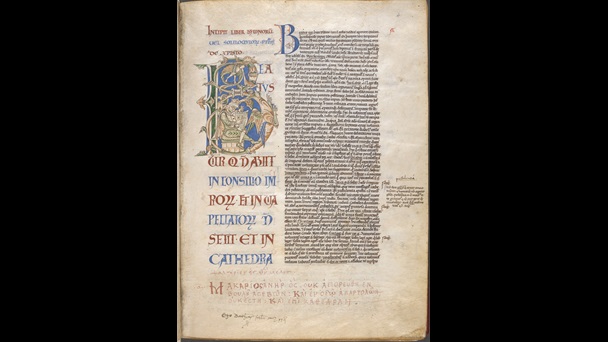 Gilbert’s gloss can be presented in a number of ways.  One, the so-called cum textu (with text) layout is featured in this copy of the commentary made in Chartres (Harley MS 4804/1). In this layout, the biblical text appears in larger letters in the inner column and the commentary appears in a denser, smaller script in the outer column of the book. In the commentary, some words or phrases are underlined. These underlined words function as a link to the relevant biblical words that are the subject of the gloss. For example, the underlined initial words for Psalm 22 (23) Domin(us) regit me (The Lord is my shepherd) link the commentary passage to the Psalter text.

Gilbert of Poitiers, Commentary on the Psalms 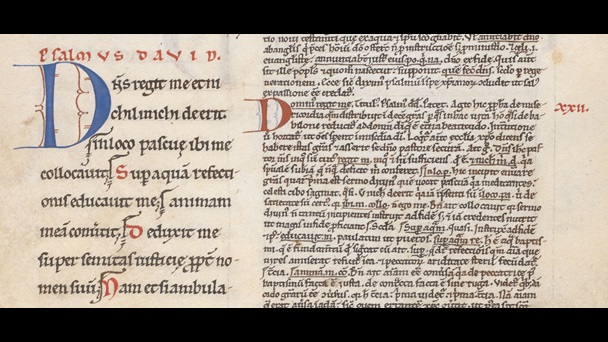 Peter Lombard and the Magna glosatura

From around 1160 another commentary to the Psalms and the Pauline Epistles, known together as the Magna glosatura, (great gloss) started to circulate. This was the work of a theologian and teacher at the cathedral school of Notre Dame in Paris, Peter Lombard (d. 1160).  Peter created a set of commentaries on these books reportedly intended for private study and that he used in his lectures. He is most known for his Four Books of Sentences, but his biblical commentaries were also popular. They became some of the most widely circulated medieval texts, with almost 500 manuscripts of the Psalms commentary and over 250 manuscripts of the commentaries on the letters of St Paul surviving.

Different layouts of the page show the various approaches taken to distinguish between the authoritative biblical text, and the 12th-century commentary explaining the meaning and interpretation of the scriptural words and passages. In a copy of Peter Lombard’s commentary on the Psalms, the Psalter text proper is found in the narrow central column while the commentary is written in wider columns on either side of the biblical text.

Peter Lombard's gloss on the Psalms 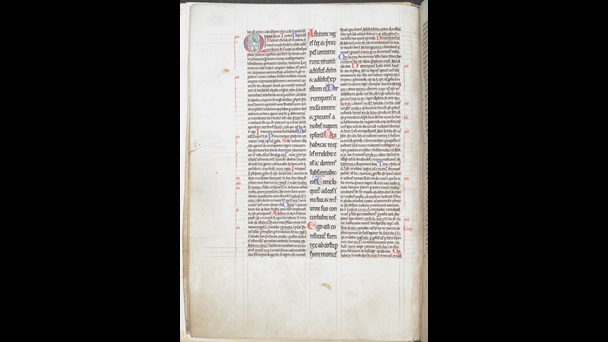 In some manuscripts, the Psalter text is placed in the margins of the page. Another copy of Peter Lombard’s work presents the commentary in two main columns. The Psalter text here is written in red ink in the left-hand margin.

Peter Lombard, Commentary on the Psalms These glossed Psalters illustrate the variety of ways in which translations and commentaries could be arranged alongside the text of the Psalms.  Sometimes, these glosses are the main focus on the manuscript page; at others, they appear in the margins. Glosses attest to the level of detailed study of Psalm verses that took place during the Middle Ages.

Christopher de Hamel, Glossed Books of the Bible and the Origins of the Paris Booktrade (Woodbridge, 1984)

Mark Zier, ‘The Development of the Glossa Ordinaria to the Bible in the Thirteenth Century: the Evidence from the Bibliothèque nationale, Paris’, in La Bibbia del XIII secolo (Florence, 2004) pp. 155-86

Theresa Gross-Diaz, The Psalms Commentary of Gilbert of Poitiers: From Lectio Divina to the Lecture Room (Leiden, 1996)

Geoff Rector, ‘An Illustrious Vernacular: The Psalter en romanz in Twelfth-Century England’ in Language and Culture in Medieval Britain: The French of England c. 1100-1500 (Woodbridge, 2009), pp. 198-206