Hebrew in Christian manuscripts of the early Middle Ages

In this survey Damian Fleming explores the early medieval Christian experience of Hebrew as a sacred and practical language.

Until the Norman Conquest of 1066, there was no Jewish population in England. However, despite little direct contact with Jewish communities and Hebrew works, Christian scholars in England engaged in the study and use of the Hebrew language.

Hebrew in the Latin Psalter

This appreciation of Hebrew by Christian scholars was in great part due to the work of a Father of the Church, St Jerome (b. c. 347, d. 420). St Jerome produced a comprehensive revision of the Latin Bible now known as the Vulgate by translating Hebrew texts of the Old Testament together with Greek copies of the New Testament. His approach to this momentous task was not widely appreciated, and he wrote voluminously in defense of his decision to translate directly from Hebrew into Latin and his desire to return to the Hebraica veritas (the Hebrew Truth). 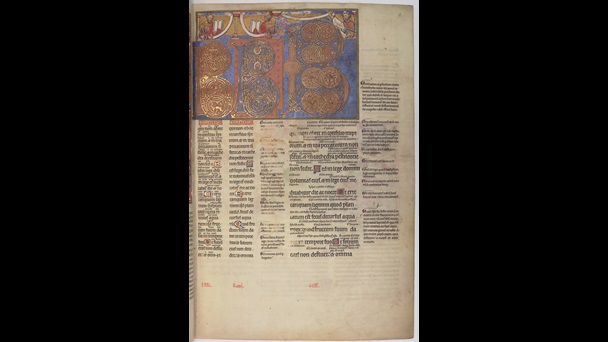 As part of this process, St Jerome composed three separate translations of the Psalms including a direct translation from Hebrew into Latin known as the Hebraicum. All three translations feature in the Canterbury Psalter, a deluxe manuscript of the book of Psalms produced in the 12th century (now BnF, Latin 8846).

The three texts are presented in parallel columns with labels in red ink underneath, the abbreviation ‘EBR.’ for Hebraicum can be seen underneath the first column. The great early English historian and biblical scholar the Venerable Bede (b. c. 673, d. 735) followed St Jerome’s logic in his regard for the importance of Hebrew. Although Bede did not have access to Hebrew books or knowledge of the Hebrew language, in his biblical commentaries he defends the use of Hebrew as the ultimate source of biblical authority.

Literate Christians in early medieval England were certainly familiar with the Hebrew alphabet, as the Latin names of Hebrew letters appeared in almost every medieval copy of the Psalter. Psalm 119 (118 by the Vulgate numbering) is arranged alphabetically in Hebrew. In Greek and Latin translations, the names of the 22 letters of the Hebrew alphabet are used as stanza headings. The first two Hebrew letters, Aleph and Beth, boldly head the first two stanzas in green and red inks of Psalm 119 in the Eadui Psalter, an 11th-century illuminated Psalter book produced in Canterbury (now British Library, Arundel MS 155). 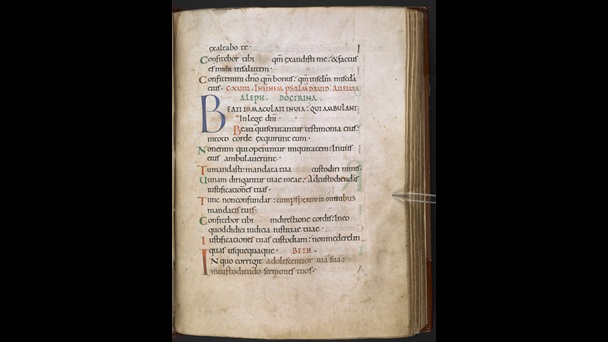 Although the names of letters were not uncommon in manuscripts of this period, evidence for firsthand knowledge of the Hebrew language is scarce in England before 1100. On the Continent however, Christian scholars were in close contact with Jewish communities including in the Carolingian Empire under Charlemagne (r. 768–814). The scholar Theodulf, bishop of Orléans and member of Charlemagne’s court (b. c. 750, d. 821) worked with a Jewish convert to revise his edition of St Jerome’s Vulgate. Additionally, an autograph manuscript (now St Gallen, Stiftsbibliothek, Cod. Sang. 878) of the Carolingian Benedictine monk Walahfrid Strabo (b. c. 808, d. 849), contains a crude but accurate copy of the Hebrew alphabet written from right to left.

The invention of Languages

A peculiar representation of the Hebrew alphabet circulated in the Latin West from the ninth century to the advent of printing. The so-called De inventione linguarum (The Invention of Languages) attributed to the scholar and Archbishop of Mainz, Hrabanus Maurus (b. c. 780, d. 856) presents the Hebrew, Greek, Latin, and runic alphabets as well as a fantasy alphabet ascribed to Aethicus Ister, a legendary protagonist of the Cosmography, an eighth-century literary and scientific text. Each alphabet is preceded by a brief explanation of its origins. According to the text, Hebrew letters were created by Moses, and later refined by the biblical prophet Ezra. The names of the letters displayed in manuscript copies are more or less correct and are often written from right to left as Hebrew actually is. However, the individual letters bear little or no resemblance to any historical form of Hebrew known.

Hrabanus Maurus, The Invention of Languages 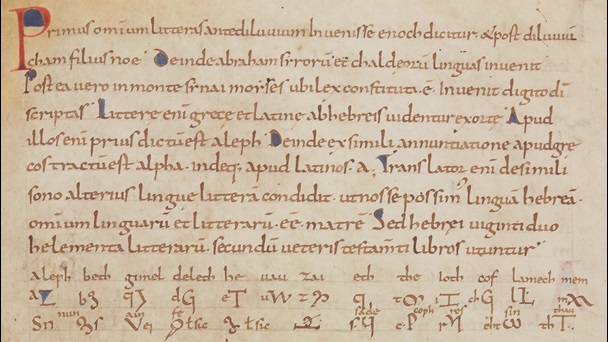 A 10th-century French copy of De inventione linguarum (now BnF, Latin 5239) features characters that resemble Latin letter forms, rather than Hebrew. The Hebrew letters Aleph (א), Daleth (ד), and He (ה) are represented by the Latin letters ‘Z’, ‘G’ and ‘T’ respectively, and the Hebrew alphabet has been reordered from left to right as if it were Latin. These odd ‘pseudo-Hebrew’ letters proliferate throughout medieval Latin manuscripts. The text contains a quotation from one of the Church Fathers, Isidore of Seville (b. c. 560, d. 636) describing Hebrew as ‘the mother of all languages and letters’, but the example of the Hebrew alphabet confirms the scribe’s ignorance of how Hebrew should be written and demonstrates his attempt to make the forms more easily recognisable.

An English collection of alphabets

No copies of De inventione linguarum survive from medieval England, but similar alphabet collections, most especially Latin, Greek, Hebrew, and runes, were compiled with varying degrees of accuracy. An English manuscript contains one such collection produced in the 11th century (now British Library, Cotton MS Vitellius A XII). The manuscript from which it was copied probably contained lists featuring the four main alphabets accompanied by letter forms, descriptions of pronunciations, name meanings, and numerical equivalents. 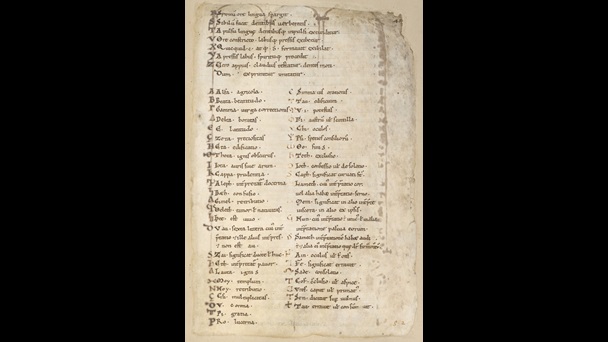 The individual forms of the Hebrew letters are also inaccurate in the Cotton copy. They are certainly not any historical form of Hebrew, nor are they the types of forms circulated in known De inventione linguarum collections. Nevertheless, these letters may derive from genuine Hebrew. Christian scribes, unfamiliar with the shape, order, and direction of Hebrew script could confuse easily incidental features of letter forms, and exaggerate them. For example, the Hebrew letter Daleth (ד) is not unlike an inverted Latin ‘L’, commonly transcribed with a slight flourish in the beginning of the upper-left stroke.

In the Cotton manuscript, the flourish has grown into a full sweeping loop, resembling an inverted Latin ‘h’. Over time and without correction, small errors like these could be compounded, leading to the practically unrecognisable forms preserved in this manuscript.

While the Cotton manuscript demonstrates the difficulty scribes could have in transmitting material, it nevertheless reflects the interest in Hebrew and other writing forms throughout this period. 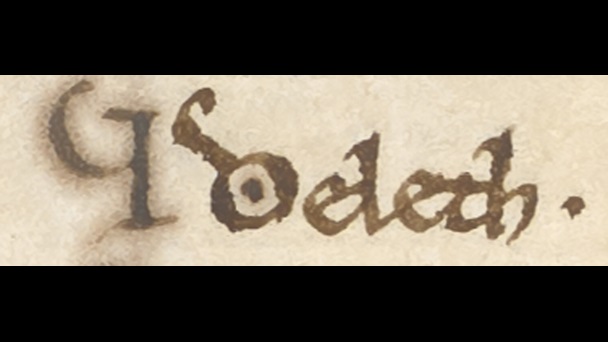 The 12th century marked a new era of Christian Hebraism in England, with the first significant migration of Jews from the Continent after the Norman Conquest of 1066. Christian access to Jewish books increased during this period, and knowledge of Hebrew among Christians may have been transmitted through collaboration with contemporary Jewish communities. This interchange occurred during the only period when legally sanctioned Jewish populations resided in medieval England, from the Conquest until the Expulsion in 1290 under King Edward I (r. 1272–1307).

A striking improvement of Hebrew letter forms can be seen in 12th-century English materials, such as a collection of Latin grammatical and historical treatises featuring the alphabet tables of De inventione linguarum (now British Library, Stowe MS 57). This later English manuscript shows a drastic improvement in accuracy from the Latin-style letter forms of the 10th-century French copy of De inventione linguarum (now BnF, lat. 5239). Although almost certainly copied by a Christian scribe, the square Hebrew letters of Aleph (א), Daleth (ד), and He (ה) are now perfectly recognisable. 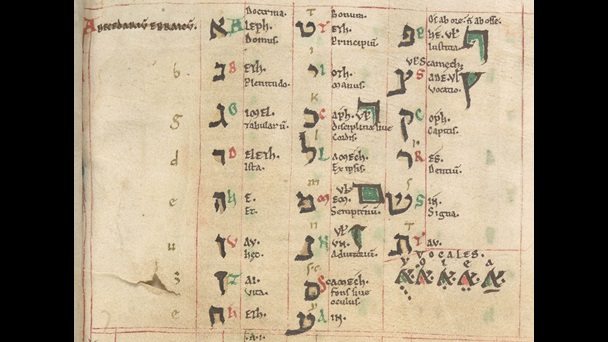 Each Hebrew letter is correctly named and given its Latin equivalent together with the traditional ‘interpretations’ of these letter names according to St Jerome. In Hebrew texts, the alphabet actually contains more than 22 named characters: five Hebrew letters have secondary forms for when they appear at the end of a word. These extra characters are also presented in this table. The chart concludes with a simplified version of Masoretic pointing.

Developed by Jewish scholars active in the Holy Land known as the Masoretes (conveyers of tradition) between the 7th and 10th centuries, the Masorah is a set of rules that ensures the correct transmission of the Hebrew Bible, including the pronunciation and spelling of scriptural texts. The Hebrew alphabet does not contain vowels. Instead, Masoretic ‘pointing’ or annotations above and below the text indicate the vowels necessary for pronunciation. The accuracy of this manuscript reflects the cultural exchange between English Christian and Jewish communities at this time.

The Polonsky Foundation England and France Project demonstrates the potential of digitisation projects to unearth often overlooked remnants of cultural history, such as this curious range of Hebrew preserved in early medieval manuscripts. By digging into the wealth of manuscript material surviving from this period we can often find that medieval Christians were aware of – and understood – more than we might guess.

A spectacular range of Hebrew texts has been digitised by the British Library as part of The Polonsky Foundation Catalogue of Digitised Hebrew Manuscripts. A new phase of digitisation is currently being undertaken in partnership with the National Library of Israel.