Legal manuscripts in England and France

The study of law in medieval Europe was revitalised in the 12th century. Joanna Frońska explores the production of legal works and their use by scholarly communities in this period.

The 12th century witnessed an important renewal of law. This flourishing of legal studies was greatly influenced by the rediscovery of Roman or civil law in Italy in the late 11th century. Originally compiled in the 6th century by Emperor Justinian I (r. 527–565), these works made up the Corpus Juris Civilis, or body of civil law, and included opinions of Roman lawyers as well as later imperial legislation.

Around 1130–1140, the Bolognese scholar Gratian also assumed a task of making the body of Church or canon law more accessible for scholarly use. Gratian’s book of canon law known as the Decretum was formed of an organised collection of material including canons and decrees of Church councils, pontifical letters containing judgments or legal solutions (known as decretals), and passages from Scripture and the Fathers of the Church. The study of these newly-accessible legal texts laid the groundwork for the birth of a new discipline and the formation of the first universities.

However, not all law books were produced for scholarly use. Legal compilations and Gratian’s Decretum in particular, were also consulted by ecclesiastical authorities as practical reference aids to resolve legal disputes and Church administrative affairs. Over 150 copies of Gratian’s work written before 1200 still survive in modern libraries, testifying to the importance of this fundamental text.

Canon law manuscripts were disseminated widely outside Italy in the 12th century, particularly in England and France. Copies of Roman law continued to circulate, but because they were of theoretical rather than practical application, their circulation was much more limited, judging from the numbers of surviving copies, and written records, such as library inventories.

Some Roman legal manuscripts must have arrived in England not long after 1139 with the Italian master Vacarius, who taught in Oxford. Often individual scholars gave copies of their books to cathedrals and abbeys to which they had close ties. The famous teacher Thierry of Chartres (d. c. 1150), left nearly a complete set of Justinian’s compilation to his cathedral chapter, including the Institutions, a textbook for new students of civil law, the Novellae Constitutiones (‘new constitutions’),  a set of laws enacted by Justinian during his reign, and the Digest, a collection of the opinions of Roman jurists.

Philip of Harcourt (d. 1163), the bishop of Bayeux, left a complete set of the Corpus iuris civilis and a Decretum to the abbey of Bec. In England, the archdeacon of Leicester, Hugh Barre (fl. c. 1150–60) gave a copy of the Decretum to Lincoln Cathedral in the late 1150s. Unfortunately, none of these manuscripts survived to the present day.

Equally, legal works moved between England and the Continent with their owners. Two copies of the Decretum, now digitised as part of The Polonsky Foundation England and France Project, are good examples of the scholarly exchange between English canon lawyers and the Paris schools, as well as the close artistic links between the two countries.

As evidenced by its script, the first manuscript was written in England (now BnF, Latin 3888) and painted by an artist very close in style to a prolific Continental illuminator known as the Simon Master. The Simon Master was active on both sides of the Channel from the 1160s to the 1180s and decorated books for Abbot Simon of St Albans (d. 1183). Judging from its early 13th-century additions such as added pen-flourishing, this copy of the Decretum was used in England at that time, before eventually joining the French royal library in the 16th century. 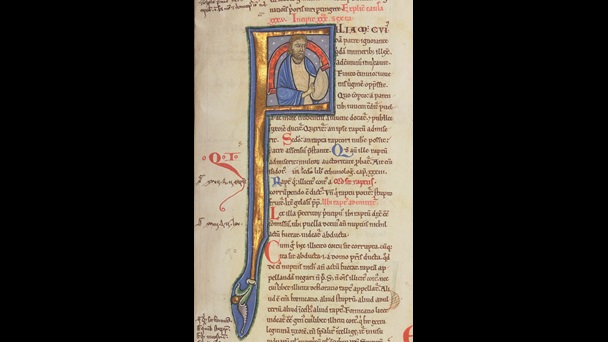 A second copy of the Decretum (now BnF, Latin 14316) tells a different story. Although it belongs to the French textual tradition, it was also probably written and illuminated in England. Shortly after it was made, however, it found its way to the Augustinian abbey of Saint-Victor in Paris, where it remained until the French Revolution. 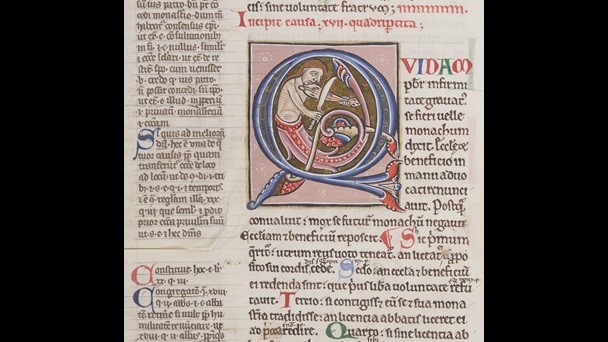 The 12th-century English connections with Saint-Victor and its famous school of theology are well documented: at least three renowned theologians: Achard (b. c. 1100, d. 1171), Andrew (d. 1175) and Richard of Saint-Victor (d. 1173) that taught there in the third quarter of the century came from the British Isles and the Abbey welcomed several English students.

When this copy of the Decretum was made and brought across the Channel, Parisian schools of canon law were at the height of their popularity. Although Bologna remained the most important destination for legal students throughout the Middle Ages, a number of Anglo-Norman clerics chose Paris for their legal education or career. For example, Gerard Pucelle (d. 1184), the future bishop of Coventry, spent several years in Paris as a teacher, and the historian Gerald of Wales (d. 1223) also studied canon law there. As a result, it is possible that before it came to enrich the library of Saint-Victor, this manuscript was used by an English student who studied leges et decreta (laws and decretals) in the Paris schools.

Sens – a centre of production of law books

In the 1160s and 1170s the archiepiscopal city of Sens briefly became a centre of book production and dissemination of important, newly composed texts. Why Sens? Doubtless because it was here that two important Church leaders sought refuge from political disputes.

Soon after, Thomas Becket, archbishop of Canterbury (b. c. 1120, d. 1170), fled to Sens in 1166 and remained there until early December 1170. The ecclesiastical entourages of both Church leaders joined that of the local archbishop, thereby increasing a demand for books and stimulating the circulation of texts. Given their disputes with temporal authorities, legal works must have been particularly needed. Pope Alexander carried out normal legislative activities of the exiled papal curia in Sens, and Thomas Becket pursued his litigation with King Henry II (r. 1154–1189) from there. Becket's use of citations from the Decretum in his letters is noticeable from 1166 onwards. Perhaps not surprisingly, therefore, a number of Decretum manuscripts attributed to Sens from this period survive.

The Polonsky England and France Project showcases an illuminated legal manuscript that may be localised to Sens on stylistic grounds. This copy of the Decretum (now British Library, Arundel MS 490), produced at the end of the 12th century, contains marginal commentaries known as glosses. 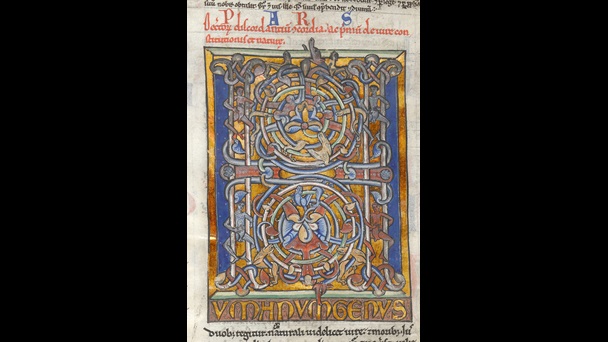 From an early date, legal manuscripts included glosses explaining and commenting on the legal concepts and conclusions of the main text. The glosses of the Arundel Decretum were derived in part from the Summa super Decretum by the French canonist Stephen of Tournai (b. 1138, d. 1202), a work that catalysed the study of canon law in France. The manuscript may have been used in northern France, perhaps in a Parisian school. It was later in the library of the Cistercian abbey of Eberbach, Germany sometime in the 13th century.

Gratian’s Decretum opens with an introduction, In prima parte (‘Part one’), and the work is arranged into three parts: Distinctiones (‘distinctions’), Causae (‘causes’) and De Consecratione (‘On the consecration’). Each of the major textual divisions in the Arundel manuscript is illustrated with a decorated initial and display script in gold. These initials are in the so-called ‘Channel Style’, which features multi-coloured tendrils inhabited with animal or human figures and interwoven with large foliage. A closer look reveals a world of hybrid creatures or monsters, often with long tails braided in cramped serpentine-like forms. Marginal glosses are presented surrounding the main text in the centre of the pages.

An illuminated copy of a civil law text (now BnF, Latin 4454) contains similar stylistic features of the so-called ‘Channel Style’ of book decoration found in the Arundel Decretum, suggesting this manuscript was also produced at Sens.

The decorated initials in the Paris manuscript, however, were executed with less precision and no gold was used in the backgrounds. The letters are embellished with oversized hybrids and almost caricatured human figures represented in expressive positions and gesture, close to those in another copy of Gratian’s Decretum from Sens, Paris, Bibliothèque Mazarine, MS 1287. 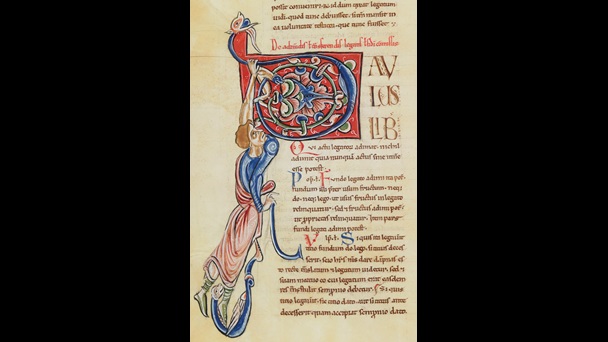 Although the decoration of the manuscript must have been done in the 1170s or 1180s, the script seems to pre-date the decoration by about a decade. The book contains two parts of Justinian’s Digest: the Infortiatum, legal writings mainly dealing with issues of succession and inheritance, and Digestum novum (‘the new Digest’), the opinions of Roman lawyers on property ownership and criminal cases such as slander and murder. Each of these works was copied by a different, but contemporary French scribe. The decoration was added after the two parts were joined together.

The manuscript includes glosses attributed to three famous Bolognese law teachers: Irnerius (b. c. 1050, d. c. 1125), Bulgarus (d. c. 1167) and Martinus (b. c. 1100, d. c. 1166). Located in the first portion of the manuscript (the Infortiatum), the glosses were all copied by the scribe of the main text, suggesting that he had in front of him an Italian glossed manuscript of c. 1150–1160. Civil law books produced outside of Italy in this period are rare. Therefore, it is tempting to look to the Italian entourage of Pope Alexander III in Sens as a possible source of the exemplar for this book.

The brief flowering of the 'school of illumination' at Sens comes to an end shortly after the city was abandoned by its high-profile guests and after its influential archbishop Guillaume aux Blanches Mains (b. c. 1135, d. c. 1202) left his seat for Reims in 1176.

The History of Medieval Canon Law in the Classical Period, 1140-1234: From Gratian to the  Decretals of Pope Gregory IX, ed. by Wilfried Hartmann and Kenneth Pennington (Catholic University of America Press, 2008).

Raoul Charles Van Caenegem, Royal writs in England from the Conquest to Glanvill: Studies in the early history of the common law (Buffalo, NY: Hein 1997 [reprint of the 1959 edition, London Selden Society]).