A binding is an essential component of a manuscript, designed to hold it together and to protect it from wear and tear. Charlotte Denoël discusses the aesthetic and symbolic value of medieval bindings on books used ceremoniously and for study.

The most prestigious manuscripts were fitted with covers made from precious materials and sometimes decorated with exquisite narrative scenes. These treasure bindings emphasised that a manuscript was not only a text to be read, but also an object to be seen and to be used in church services.

Manuscripts intended for everyday reading, on the other hand, were provided with bindings that, though less ornate, were nevertheless technically sophisticated in their design.

In the Middle Ages, books used for the Mass formed part of a church treasury, together with other objects used in services and the relics of saints. These manuscripts fulfilled an important symbolic function, reflecting the importance and prestige of the church for which they were made.

This is particularly true for Gospel-books, which represented a physical embodiment of the Word of God, as expressed in the Gospel of St John: ‘And the Word was made flesh, and dwelt among us (and we saw his glory, the glory as it were of the only begotten of the Father), full of grace and truth’ (John 1:14).

Other service books could also be richly adorned, including Missals, which contain all the texts and music needed to celebrate the Mass. The sacred qualities of these books are reflected in their luxurious decoration. Inside, pages are illuminated with gold and precious materials. Originally books were similarly decorated on the outside with precious materials, such as gold, silver, gemstones and ivory carvings.

Few of these sumptuous bindings have survived. The three presented here are amongst the finest extant medieval examples, and offer a glimpse of the artistic richness of these creations.

During the Carolingian period, ivory carvings were often included as part of the decoration on covers. One of the most famous ivory workshops was located in Northeastern France, in Metz, during the episcopate of Drogon (r. 823–55) – an illegitimate son of Charlemagne and a great patron of the arts – and prospered under his successors.

Metz ivories were famous for their quality and their lavishness. Many of them were re-used on later manuscript covers, as on luxury Gospel-books made around the end of the 10th century. 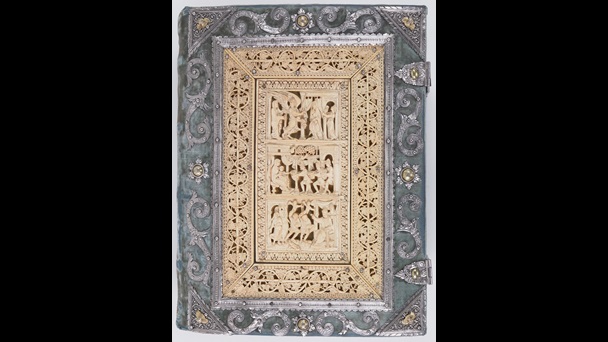 The upper cover of a 10th-century Gospel-book depicting the Annunciation, the Adoration of the Magi and the Massacre of the Innocents (BnF, Latin 9393)

The remarkable ivory plaques of the upper cover date to the middle of the ninth century. The central panel is divided into three parts, representing events from the early life of Christ: the Annunciation to the Virgin Mary, the Adoration of the Magi, and the Massacre of the Innocents.

With its delicate and graceful silhouettes, this work is emblematic of the Antique style developed in Metz. The central image is framed by four smaller ivory panels with delicate vine scrolls and foliage, all set against a golden background.

16th-century partly-gilded silver appliqués decorate the green velvet visible around the ivory panels. The added silver book clasps are engraved with the arms of the cathedral in Metz.

The manuscript was seized in Metz in 1802 by the Benedictine historian and librarian Jean-Baptiste Maugérard (b. 1735, d. 1815) on behalf of Napoleon (b. 1769, d. 1821) and now forms part of the national collection of the Bibliothèque nationale de France.

Precious materials of different origins and dates were assembled to create an equally impressive treasure binding for another Gospel-book made in Metz, produced in the second half of the 11th century (now BnF, Latin 9391). 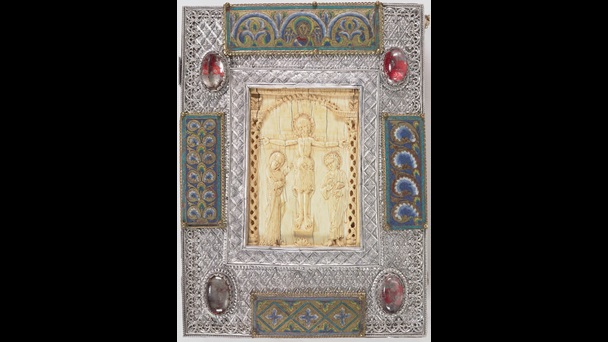 The lower cover of an 11th-century Gospel-book depicting the Crucifixion (BnF, Latin 9391)

The lower or back cover features an ivory carving of the Crucifixion, made in Constantinople in the 11th century. It is framed with silver plates, enamels and cabochons of rock crystal (from the Middle French word caboche meaning ‘head’; a round stone that has been polished but not cut), creating a splendid cover that is fitting for the sacred text. 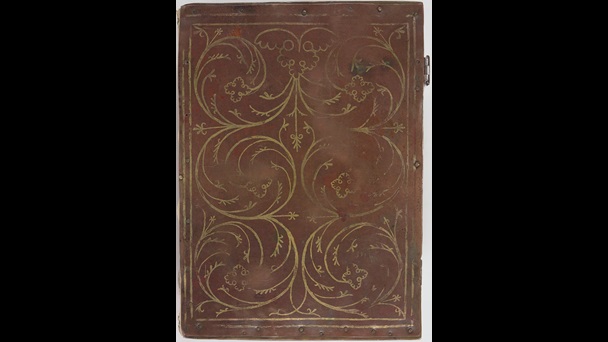 On the front cover, a copper plate decorated with gilded and painted foliate scrolls provides a remarkable example of a technique used by goldsmiths in the 12th century in the region of the Meuse valley in present day Belgium.

The manuscript was seized in 1802 alongside the Gospel-book now known as BnF, Latin 9393 in Metz and now forms part of the national collection of the Bibliothèque nationale de France.

During the 11th and the 12th centuries, a new kind of text appeared for use in the liturgy – the Missal, which combined texts previously included in several different types of liturgical manuscripts. Amongst these, the Sacramentary contains the prayers recited by the priest during Mass; the Gradual includes the response and verses for the Epistle readings and Epistle Lectionaries and Gospel Lectionaries contain the Epistle and Gospel readings for the Mass. 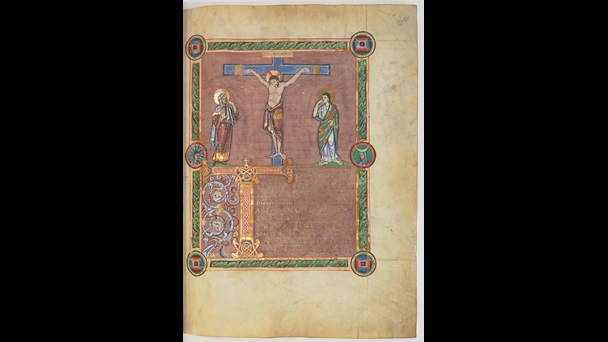 This sumptuous example includes texts principally from the Sacramentary. It was made around 1050 in the Abbey of St Vaast of Arras, in the north of France, for the use of the important abbey of St Denis. The lavish decoration features purple backgrounds, luxurious frames with foliate patterns, as well as numerous full-page images.

At the first prayer of the Canon of the Mass, said before Communion, is a scene of the Crucifixion, with the Virgin and St John above the glittering opening words of the prayer, Te igitur clementissime Pater (Thee, therefore, most merciful Father), written out in gold letters. 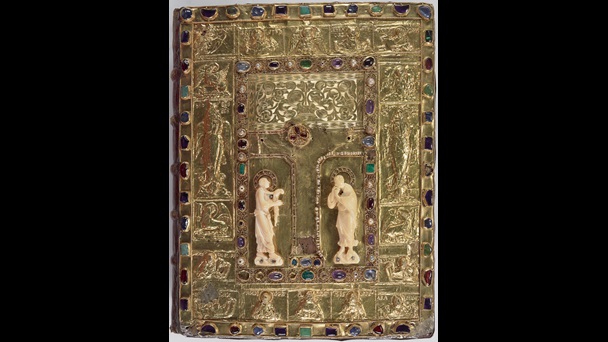 The luxury so evident inside the book is mirrored in a rare example of contemporary binding of similar magnificence. As before the Canon inside, the upper cover features a Crucifixion scene. Here it is decorated with carvings made from walrus tusks of the Virgin and St John (the figure of Christ on the Cross is missing) made at the court of Charles the Bald, king of West Francia (r. 843–877). The ivory figures are re-mounted on an 11th-century embossed gold foil background with the form of the cross outlined with gems and pearls.

Around the edges are embossed figures of prophets, cherubim and the symbols of the Evangelists. The lower cover features a 15th-century gilded copper plate depicting St John the Evangelist.

This accumulation of costly artistic decoration, added over centuries, underlines the continued importance and status of the sacred text throughout Europe. It also demonstrates the continuing interest in the Carolingian past and the exceptional status of this kind of liturgical book in the treasuries of religious institutions during the Middle Ages and beyond. 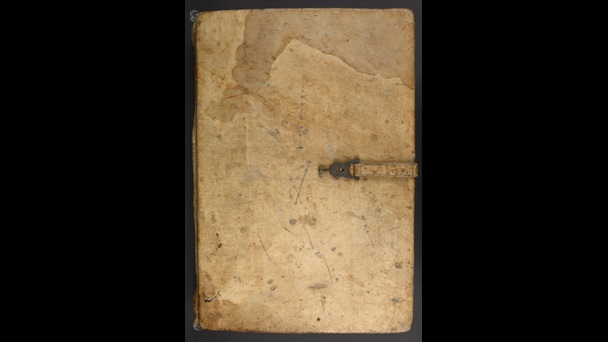 Most medieval manuscripts were designed primarily for study and reading rather than display. From the few original covers that survive, it appears that the bindings of these books were practical and undecorated.

The original binding surviving on a late 12th-century glossed copy of the book of Ezekiel from Fountains Abbey, North Yorkshire (British Library, Davis80) exemplifies the type of binding that probably was once commonplace for monastic manuscripts.

Yet despite its lack of decoration, this binding is elegantly designed for its purpose. Wooden boards covered with white leather gave strength and protection to the manuscript. A fastening, consisting of a leather strap with a clasp and pin, held the book shut when it was not in use. Two integrated bookmarks made from strips of leather allowed the reader to save and compare passages of text.

As such, this binding demonstrates the ideals of visual simplicity and diligent biblical study upheld at monastic houses like the Cistercian monastery of Fountains.