Calendars provided one of the most important means of time keeping for the medieval world. Cristian Ispir and Kathleen Doyle explain how they were used.

Calendars can be found in many of the medieval manuscripts digitised by The Polonsky Foundation England and France Project. Typically they were not copied on their own; instead, they were bound together with other texts, such as liturgical books, histories and annals, scientific works, and theological treatises.

Calendars are particularly common features of Psalters, or books including the biblical book of Psalms. They help to provide these books with a more liturgical or devotional function, because they mark some of the major Christian feast days, such as Christmas and Epiphany, as well as saints’ days. A saint’s day celebrates the date that a saint died or became a martyr and entered into heaven.  The more important saints are often listed in red or coloured ink, the derivation of the expression ‘red letter days’, although in some grander books these more important feasts are written in gold. 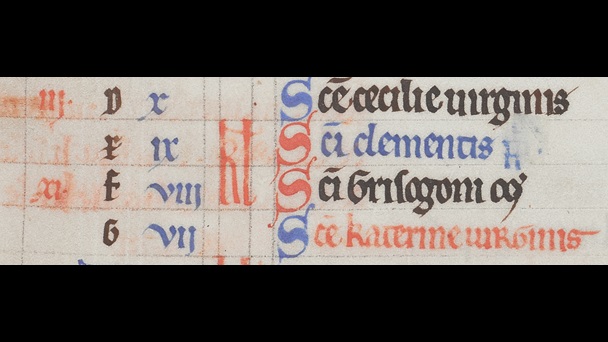 The feast day of St Katherine, marked in red in a calendar page from a Psalter (British Library, Arundel MS 157, f. 18r, detail)

In the Middle Ages, as today, calendars served to organize time into days and months. Although the names of the months are the same as those we still use, the numbering of the days was based on the ancient Roman system of kalends (from which the word calendar derives). Typically the large letters ‘KL’ that are abbreviations for this Latin word appear at the top of calendar pages. 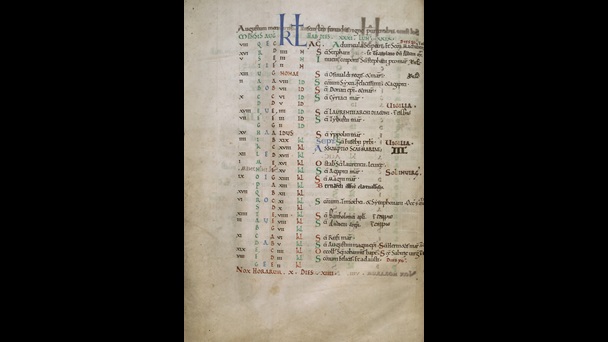 The letters KL for kalends at the top of a calendar page for August from the 11th-century Eadui Psalter (British Library, Arundel MS 155, f. 5v)

Within this system, kalends was the first day of the month; nones fell either on the fifth or the seventh day, and ides came eight days after nones.  Months had the same number of days as in our system, but they were not numbered sequentially from 1 to 30 or 31.  Instead, you counted backwards, or more precisely, counted how many days before the next nones, ides or kalends.  This was determined by using the Roman numerals and abbreviations listed in columns to the left of the names of saints.

For example, in this calendar page for February, which appears in the Bosworth Psalter, the day for St Agatha (d. c. 251) is marked on the nones of the month (the 5th February). The day for the English St Milburh (d. 727), takes place seven days before kalends (or 23rd February); and the day for St Eulalia (d. c. 304) is expressed as the day before ides (or 12 February). 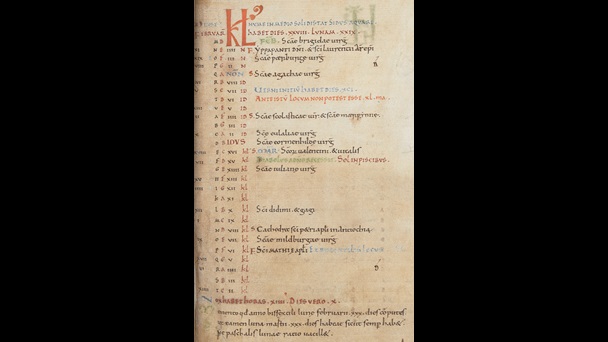 In most medieval calendars, there are two other columns to the left of the names.  Typically in the outermost column are Roman numerals running from one to nineteen.  These numerals are known as the Golden Numbers, which help to find the date of Easter in any particular year, the Church’s most important feast.  Easter is a so-called ‘moveable feast’, because its date is not fixed. Instead, it is dependent on the lunar cycle: Easter was celebrated on the Sunday following the first full moon after the vernal equinox (the spring date when day and night are the same length).  The Golden Number tells you when the new moon will appear, and therefore, the date of the full moon fourteen days later. A calendar page for September, from an 11th-century Psalter. The Golden Numbers appear in the far-left column. The Dominical Letters are the fourth column from the left (British Library, Arundel MS 60, f. 6r).

Usually in another column are letters running from ‘a’ to ‘g’ that repeat continuously.  These are the Dominical Letters, so-called because they track Sundays throughout the year. Each year had its own Sunday letter (and leap-years had two), and every year it moves back one. Once you had calculated the appropriate letter, you could use the calendar to establish the dates of every Sunday of the year.

The most decorated calendars often have painted decoration in addition to gold and coloured text.  In most cases these images consist of the signs of the Zodiac, and in more deluxe manuscripts, the Zodiac signs together with the so-called ‘labours’ or ‘occupations of the months’. These show an activity typical for that month, which may be a scene of labour, such as sowing or harvesting, or another, more aristocratic pursuit such as hawking.

The illustrations follow a more or less standardised formula, although the details can vary enormously:

January: the water bearer of Aquarius, and feasting, sometimes with the two-faced Roman god of time and transitions Janus, who looks both backwards to the previous year as well as to the year to come.

February: the fish of Pisces, and someone warming his or her feet by a fire.

March: the ram of Aries, with the pruning of trees.

April: the bull of Taurus, and a spring activity of enjoying the countryside and picking flowers.

May: the twins of Gemini, and hawking.

June: the crab of Cancer and reaping or harvesting of hay.

July: the lion of Leo and weeding or harvesting of wheat.

August: the woman of Virgo, and threshing.

September: the scales of Libra, and grape harvesting or the making of wine.

October: the scorpion of Scorpio, and sowing.

November: the archer of Sagittarius, and gathering acorns for hogs or pigs.

December: the goat of Capricorn, and the slaughter of the pig.

These are the typical scenes for northern Europe, but in calendars from southern Europe the illustrations of the labours may be adjusted to a warmer climate and accordingly moved one month. 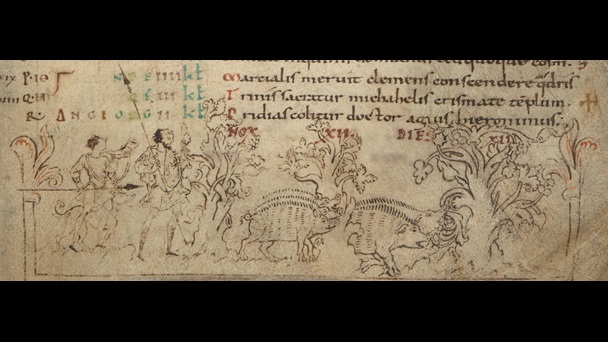 A hunting scene below a page in an Anglo-Saxon calendar (British Library, Cotton MS Julius A VI, f. 7r, detail) 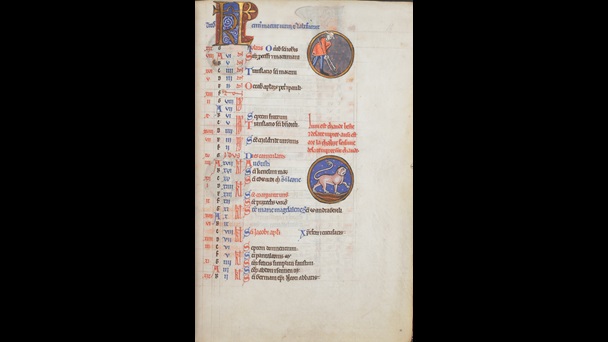 An image of the Lion of Leo and a scene of weeding alongside the calendar page for July (British Library, Arundel MS 157, f. 16r)

The months in calendars often included bad-luck days, also known as ‘Egyptian Days’. These were listed as dates in the calendar itself and appeared in verses at the top of the calendar page. They identified particular days when one was discouraged from participating in certain activities, such as having certain medical procedures or going on a journey. For example, in an English 12th-century manuscript preserved in Paris (now BnF, Latin 768) a verse above the calendar page for September explains that the third day from the beginning of the month and the tenth counting from the end are not propitious days: Tercia septembris et denus fert mala membris (3 and 21 September are unlucky for the limbs). These dates are marked in the calendar with a coloured letter ‘D’. The Egyptian Days are given at the top of the calendar page for September in this English Psalter (BnF, Latin 768, f. 8r)

Additions to the calendar

Some calendars commemorate deceased monks, benefactors and other important figures, inscribing their names alongside the dates of their deaths.  One manuscript, for example, produced at St-Gilles Abbey in southern France, includes an obituary (a register of deaths) organised as a calendar. The names of various monks and benefactors have been entered in its right-hand margin. The names of monks and benefactors are entered in the right-hand margin of this volume from the abbey of St-Gilles (British Library, Add MS 16979, f. 4r)

Such additions can also be found in the calendar pages of personal books surviving from this period, whose owners used them to honour the dates of the deaths of significant family members and friends.

A calendar also can offer clues about a book’s origin and use in the identity of the saints it includes.  One highly illuminated Psalter is thought to have some connection with the city of Oxford, because its calendar contains three feasts for St Frideswide (d. 727), on 12th February, 15th May and 19th October. St Frideswide was the abbess of a double monastery at Oxford during the Anglo-Saxon period, and she was venerated as a local saint there from the 10th century onwards. One of St Frideswide’s feast days occurs the day before ides, or 12th February, in this calendar page from a Psalter (British Library, Arundel MS 157, f. 13v, detail) Another of St Frideswide’s feast days happens on ides, or 15 May, in this calendar page from the same manuscript (British Library, Arundel MS 157, f. 15r, detail)

Later additions or changes to a calendar may provide additional clues about the history of a manuscript.  In England for example, in 1538, Henry VIII ordered that St Thomas Becket’s feast day on the twenty-ninth of December should be ‘erased and put out of all the books’, as Becket was considered to be a ‘ rebel and traitor to his prince’ rather than a saint.  In books where this is done, the reference to popes may also be effaced or lined through, in particular St Silvester’s day shortly after Becket’s feast, on 31 December. The feast-day for St Thomas Becket was added to this calendar page for December from the Eadui Psalter, and then later erased (British Library, Arundel MS 155, f. 7v, detail)

The prevalence of calendars in medieval manuscripts reflects how integral they were, both to the liturgical needs of the Church and to the practice of private devotion.

Teresa Perez Higuera, The Art of Time: Medieval Calendars and the Zodiac (1998)

Jörg Rüpke, The Roman Calendar from Numa to Constantine: Time, History, and the Fasti (Malden, 2011)