Old English after the Norman Conquest

Calum Cockburn explores what happened to the writing of the vernacular after William the Conqueror’s invasion in 1066.

The Norman Conquest introduced a period of significant change in the linguistic, cultural and political landscape of England, as a new king took the throne and Anglo-Norman became the dominant language of the royal court and government. Yet despite the end of Anglo-Saxon rule, the English language was not forgotten. Old English – the earliest historical form of the vernacular, in use since c. 600 – was still spoken by many people throughout the country and it appeared in books produced in English monasteries for at least a century after William the Conqueror’s invasion. Manuscripts digitised by The Polonsky Foundation England and France Project attest to the great variety in the form and content of Old English texts that scribes were writing and copying during the post-Conquest period.

Anglo-Saxon England produced many historians and theologians, whose lives and works were studied even after the Normans conquered the country. Material about the Northumbrian historian Bede (d. 735) was particularly popular. Bede’s Death Song, a five-line poem in Old English that is said to record his final words, survives in 45 manuscripts. The dying narrator of the poem thinks about his life and the judgement that awaits him after his death:


Before that enforced journey, no one becomes wiser than him who needs to reflect, before his going hence, on what good and evil within his soul will be judged after his death.

A copy of the text is included in a 12th-century manuscript of Symeon of Durham’s De Exordio Ecclesiae Dunelmensis (Concerning the Beginning of the Church of Durham). The manuscript’s scribe was evidently comfortable in working with both Latin and Old English, though he was writing at least half a century after the Battle of Hastings and the beginning of Norman rule. There is no noticeable distinction in his handwriting as he moves between the two languages (see lines 3 and 7 in the image below). 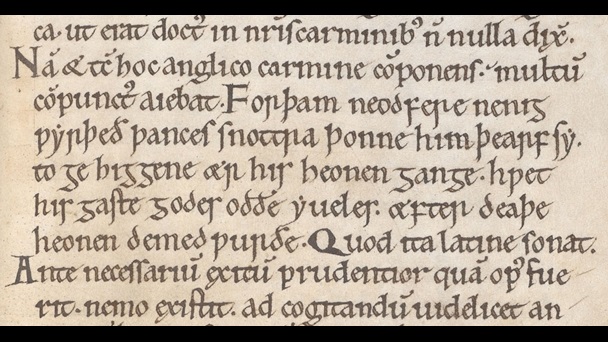 The Lord’s Prayer in Old English

In addition to original compositions in Old English, scribes also copied vernacular translations of Latin texts into their manuscripts. An English version of the Lord’s Prayer – one of the only copies of the text that survives – appears in a miscellany compiled in Salisbury at the end of the 11th century. The manuscript contains a huge variety of material, including lists of the Hebrew, Greek and Roman alphabets, astrological treatises and calendars. The Old English Lord’s Prayer has been added into a space on the manuscript page beneath a treatise on penitence. This version begins Fader ure þe giert on heofena, sy þin nama gehagod. Cume þin riche sy þin willa on geor ða swo swo on heofona (Our Father, who is in heaven, hallowed be your name. May your kingdom come, your will be done, for ever as it is in heaven). 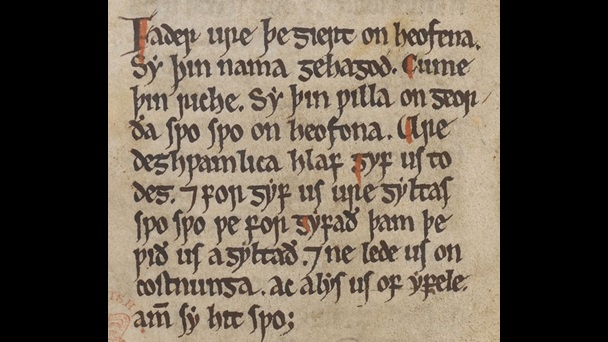 By the 12th century, books about medical knowledge, science and mathematics were common features of monastic libraries throughout Europe. Old English appears in a number of manuscripts that contain scientific works, where it is often used as a gloss (a translation or explanation of a word or phrase) for Latin texts and names.

One such book is a miscellany, produced in the first quarter of the 12th century, which contains T-O maps, acrostic poems and tables for calculating the date of Easter. There are also several diagrams used for the measurement of time and for illustrating the relationship between heaven and earth. In the margins of a diagram of creation that incorporates the names of the Apostles, the Old Testament prophets and the Four Evangelists, the manuscript’s scribe has written Old English glosses above the Latin names of the winds. Boreas is explained as estan norðerne (north-east); Circius as westan norðan (north-west), and Chorus as suð west (south-west). 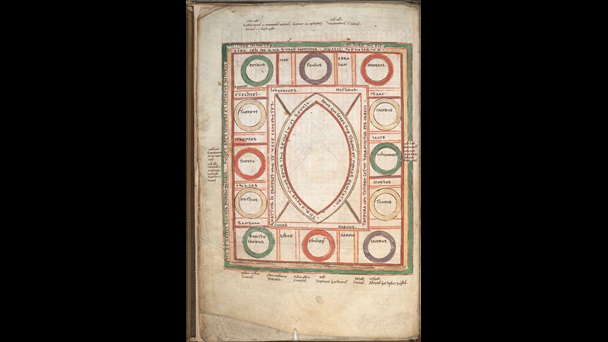 Diagram of creation, with the names of the winds glossed in Old English in the margins (British Library, Harley MS 3667, 7v)

Monastic scribes also added Old English glosses to existing scientific and medical manuscripts, produced during the Anglo-Saxon period. An early 11th-century herbal that was made in Canterbury or Winchester contains Old English translations of a collection of Latin remedies, illustrated with numerous paintings of plants and animals. The manuscript continued to be read and annotated for many years after its production. Chapter numbers and glosses in Anglo-Norman French and Old English were added to the text’s table of contents during the 12th century. The Latin title of one text De alliis, for example, has been translated as garlec (garlic). Another, De aristologia, has been translated as smeorewirt (literally ‘birthwort’). Several medical recipes in Old English were written into the book around the same time as the glosses, including one, entitled Wið fot adle (Against foot disease, or gout). It describes a recipe for a drink – a mixture of cinnamon, laurel berries, cumin, ground peppercorns and wine – that a patient should take every day until the disease is cured, or oþ ðæt he hal fy (until he is whole). 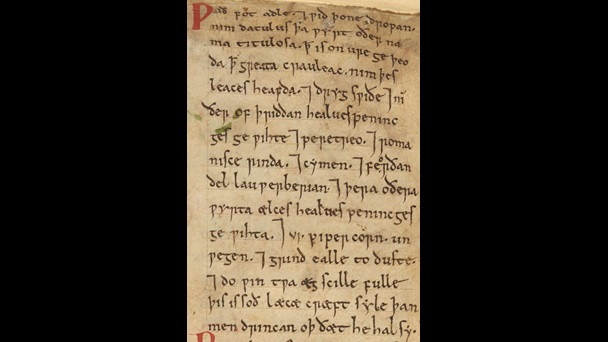 Glosses were not featured in scientific manuscripts and collections of medical treatises alone. They were also incorporated into sacred books, such as Psalters, where they functioned as translations or commentaries complementing the central text. Thirteen Psalters made in England during the late Anglo-Saxon period include continuous Old English glosses, where each Latin word of the Psalms is accompanied by an equivalent in the vernacular. English monasteries continued to produce such works after the Norman Conquest. An illuminated Psalter produced in Winchester (now British Library Arundel MS 60) has a continuous Old English translation that appears above the Latin text throughout most of the manuscript. The gloss is so extensive that it effectively provides the reader with a bilingual copy of the book of Psalms. The opening of Psalm 2, for example, is glossed as:

Why have the people raged and men imagined vain things? 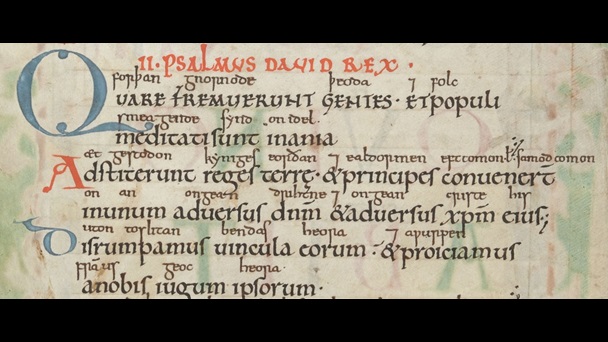 A text at the end of the Psalter helps date the manuscript to the turn of the 12th century. A scribe has added the Six Ages of the World in Latin and Old English. This short work is based on St Augustine’s division of historical periods according to biblical events, from the creation of Adam and Eve in Genesis to the events of the book of Revelation. This version of the text tells us that the period from Christ’s birth to the present day was 1099 years, some 30 years after William the Conqueror’s invasion.

The Canterbury or Anglo-Catalan Psalter

Another Psalter, written a century later, shows that Old English continued to be used as a gloss in sacred books. The Canterbury or Anglo-Catalan Psalter, produced at the end of the 12th century, is a lavishly illustrated English manuscript that is also rich textually. It contains all three versions of the Psalms traditionally ascribed to St Jerome (b. 347, d. 420): the Roman (named for its use in Rome and southern Italy); the Gallican (widely used in Gaul); and the Hebraicum, a translation made from the Hebrew. In addition, the text has an Anglo-Norman interlinear translation and an Old English gloss, as well as a commentary on the biblical text, found in the margins.

The Old English appears above a few lines of the Roman version of the Psalms. Psalm 64: 2 Te decet hymnus deus in Sion is glossed as þe geriseð lofsang god on sion (You become a hymn, God, in Sion). Meanwhile, Psalm 59: 3 deus reppulisti nos et destruxisti is translated as God ðu adrife us 7 tobrece (God you have thrown us off and destroyed us). 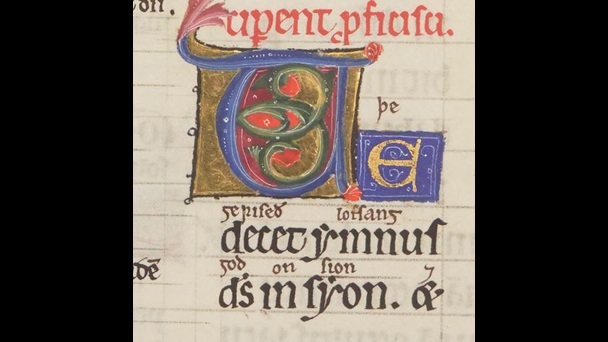 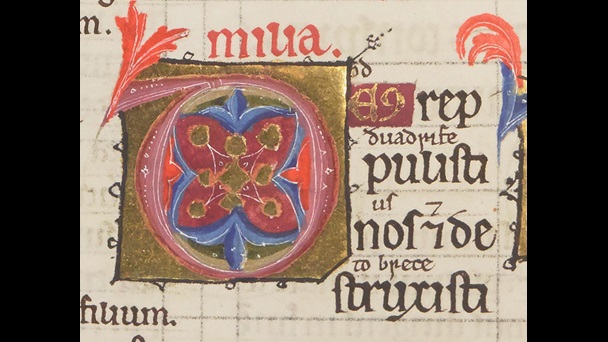 The manuscripts that survive from this period show that scribes continued to write Old English in their manuscripts for at least a century after the Conquest. There was huge variety in the form and content of the Old English texts in these works – whether they were sacred books, historical chronicles, or compilations of scientific and medical treatises – and the vernacular often had a complex relationship with Latin and Anglo-Norman French on the page. Rather than dying out, Old English represented a significant feature of manuscript production in monastic scriptoria during the post-Conquest period.

N. R. Ker, Manuscripts in the Century after the Conquest (Oxford, 1960)