From the Bible to works of the Church Fathers, Jesse Keskiaho outlines the many ways writers and scribes used navigational tools to guide the reader in early medieval manuscripts.

How does one read a medieval book? Even if you have knowledge of Latin and other contemporary languages, the mass of text can be daunting. The subject matter may be unfamiliar, or you could be looking for a particular passage and wish to locate it quickly. Biblical manuscripts and other works included reading aids, such as chapter titles and marginal annotations, to provide practical help in navigating books and their contents.

Many manuscripts have rubrics marking the beginnings and endings of texts. A text opening was commonly marked by a rubric that announced the name of the work and its author if known (the incipit), and its ending was marked by a similar rubric (the explicit). The word ‘rubric’ derives from the scribal practice of marking titles and introductory sentences by writing them in red, rubricating them (from the Latin rubrus, meaning ‘red’). 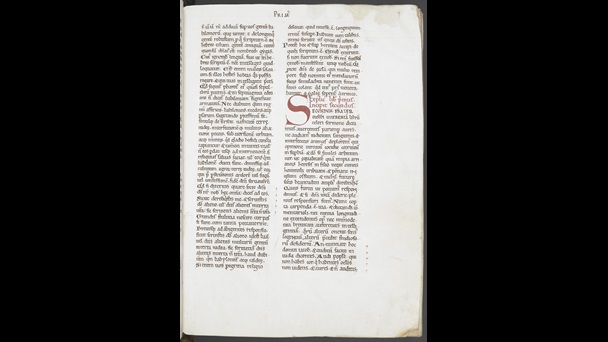 Rubric divides the closing of the first book (explicit liber primus) and the opening of the second (incipit secundus), with a red initial ‘S’(ecundum) marking the beginning of the text (British Library, Egerton MS 3776, f. 16r)

In some books the different parts of a text were also marked with running titles, placed in the upper margins of pages. Running titles can be seen in a 12th-century commentary of one of the Church Fathers, St Jerome (b. c. 347, d. 420) on the Books of Jeremiah and Ezekiel (now British Library, Egerton MS 3776). This manuscript was produced in the first half of the 12th century in the scriptorium of Bury St Edmunds Abbey, the earliest known centre in England to provide consistently running titles in copies of biblical works. 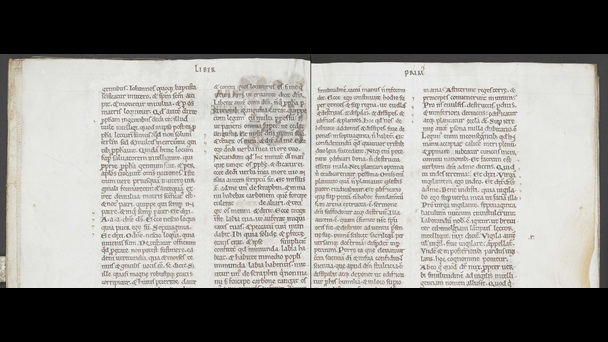 Like many theological texts, St Jerome’s commentary is divided into separate sections known as ‘books’. The running titles of the Egerton copy state the individual sections across two pages, such as liber primus (‘book one’) to highlight to the reader what section is currently open. The division of texts into books was a vestige from antiquity when texts were written on papyrus scrolls: a work longer than one scroll was divided into books on separate scrolls.

Scribal design in the works of St Gregory the Great

One Church Father provided reading aids within his own work. St Gregory the Great (b. c. 540, d. 604) was a prolific writer of theological works including biblical commentaries. His commentary on the Book of Job, the Moralia in Job, was substantial in size and circulated in the medieval period in sets of up to six volumes.

However, the work was well-structured and included signposts essential to the reader for navigating the text. For example, St Gregory signals when he moves from one exposition to another. Scribes who copied manuscripts of these texts made St Gregory’s signposts more visible through the use of colour and script to aid reader navigation of the text.

Two eighth-century copies of the Moralia additionally feature reading aids enhanced by the scribe. Both manuscripts are single volumes from multi-volume sets. The earlier of these (now British Library, Add 11878) was copied at the monastery of Luxeuil in the first half of the century. Changes in the style and colour of the script are used to mark places where St Gregory quotes from Scripture.

For example, on one page subditur (‘as set below’) appears in large, bold script (line 9) and the line below it features a passage from Job 32:1, omiserunt autem tres viri isti respondere Iob eo quod iustus sibi videretur (‘so these three men stopped answering Job, because he was righteous in his own eyes’). Subditur (‘as set below’) appears in large, bold script (line 9) to mark the quotation below it from Scripture (British Library, Add 11878, f. 10r)

Another copy of the Moralia was made in the latter half of the eighth century in Laon (now British Library, Add MS 31031). Here, rubrics and decorated initials clearly define the openings of new books, as seen in the incipit of book three. Additionally, signs placed in the margins are used to highlight biblical quotations in the main text. Both types of reading aids help the reader to quickly locate commentary on specific passages in the Book of Job.

Merovingian copy of St Gregory the Great's Moralia in Job 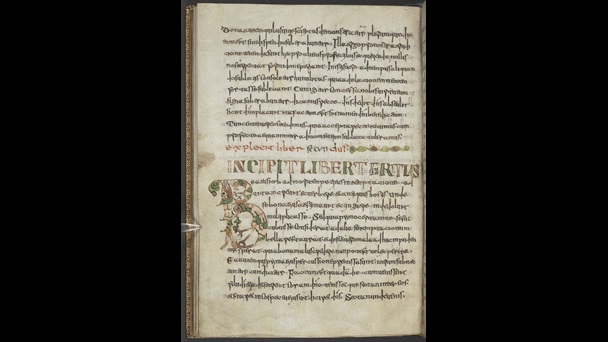 The opening of book 3 (incipit liber tertius) of the text is clearly defined with rubrics and a decorated initial (British Library, Add 31031, f. 55v)

Reading aids to the Bible

The Bible was central to Christian culture and many scholars introduced reading aids to manuscript copies. St Jerome was a skilled scholar in Latin, Greek and Hebrew, and alongside biblical commentaries, he prepared a new Latin translation of the Bible in the late fourth century. This work became known as the Vulgate and it eventually became the standard version of the Bible used throughout the Middle Ages. He also prepared several aids to reading the Bible, including prefaces for individual books and text summaries.

Following the work of St Jerome, the Roman statesman Cassiodorus (b. c. 484, d. c. 585) added further reading aids to his copies of the Latin Bible, such as marginal annotations, chapter headings and text prefaces.

Upon retirement from official service, Cassiodorus founded a monastery and school he called the Vivarium in Southern Italy. He prepared the biblical aids for the use of his community and recorded this work in his text, the Institutiones Divinarum et Saecularium Litterarum (Institutes of Divine and Secular Literature). Composed between c. 530 and c. 550, it was read avidly in the medieval period for guidance on studying and collecting books. This page shows the beginning of chapter titles to the Gospel of St Matthew (British Library, Add 11849, f. 11v)

New versions of the biblical text continued to be produced in the ninth century under the leadership of such scholars as Alcuin (b. c. 735, d. 804) and Theodulf (b. c. 760, d. 821), later bishop of Orléans. They sought above all to improve the quality of the texts.

These biblical texts also include collections of reading aids. For example, a copy of the Four Gospels produced in Tours in the second half of the ninth century (now British Library, Add MS 11849) contains several types of reading aids. These include canon tables, designed to indicate where the Four Gospels shared subject matter. The manuscript also includes a list of chapter headings to the Gospel of St Matthew. The chapter division is identified in the main text by numbers inserted in the margins. The first lines of chapters have also been rubricated. 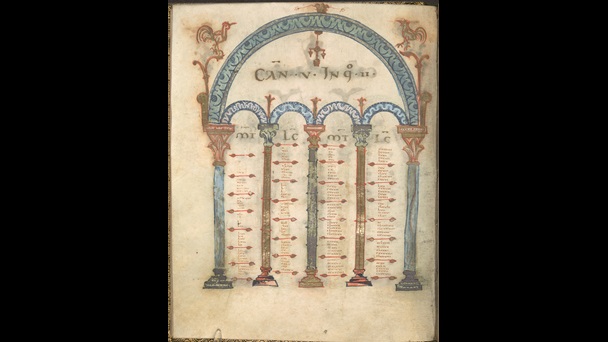 Chapter titles in the works of St Augustine

The works of the Church Fathers were also furnished with chapter headings and other reading aids. St Augustine of Hippo (b. 354, d. 430) had these created for some of his works, most notably De civitate Dei (The City of God), a book of Christian philosophy.

However, not all patristic texts were furnished with chapter titles by their authors. Many of St Augustine’s books passed through the study of one Eugippius (b. c. 455, d. c. 535), a monk and later abbot at a  monastery in Lucullanum in Naples, situated at the tomb of St Severin.

At the turn of the sixth century Eugippius compiled a collection of excerpts from St Augustine’s works, using existing chapter titles to locate passages, and creating chapter division and titles for works that previously had none. Chapter titles are written in red in the margins of a 12th-century copy of St Augustine’s De Trinitate (On the Trinity) (BnF, Latin 12204, f. 2r detail)

Manuscripts of St Augustine’s fifth-century theological work De Trinitate (On the Trinity) carried several different sets of chapter headings in the Middle Ages. The most common set of headings may have been made or commissioned by St Augustine himself. These are perhaps included in a 12th-century English copy (now BnF, Latin 12204) that by the 15th century had found its way to Saint-Germain-des-Prés. In this manuscript, chapter titles are written in red in the margins.

Common annotations in medieval manuscripts are corrections. Textual errors are a natural consequence of books copied by hand. They could occur in the copying process in various ways, including skipping lines of text. It was thus common practice to check a manuscript, either against the text it was copied from or another copy of the same text, and correct any mistakes accordingly.

Such annotations can be seen in the Luxeuil Moralia, including notes of omitted words that were previously missed with a sign indicating their intended location in the text. 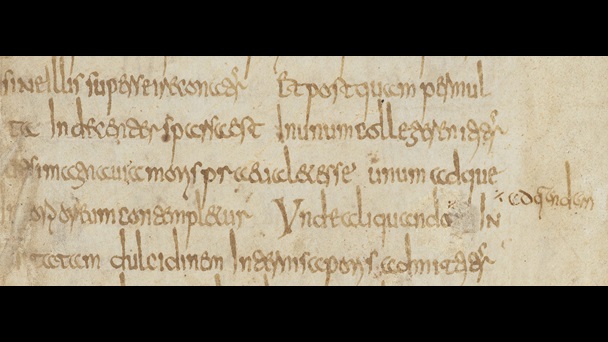 An annotation appears in the right margin (line 6) to show the words ad quamdam (‘to someone/something’) have been omitted from the main text (British Library, Add 11878, f. 40r detail)

Like a modern reader today, the medieval reader could mark passages of interest in their books or comment on the text by annotating it. Readers highlighted topics or passages of interest by marking the margin of the relevant text. These notes generally consist of a simple sign, often made up of some of the letters of the Latin word nota (‘take note’). Notes can also be accompanied by text, stating the topic marked.

The 12th-century English copy of Augustine’s De Trinitate contains a nota mark followed by the words piam intentionem (‘pious intention’) (line 24). This note marks a passage in the main text discussing humility in which St Augustine suggests that a pious intention overrules authority. Such annotations might be made by a scholar carrying out research, or simply by a reader for his personal use or for the community that owned the book. 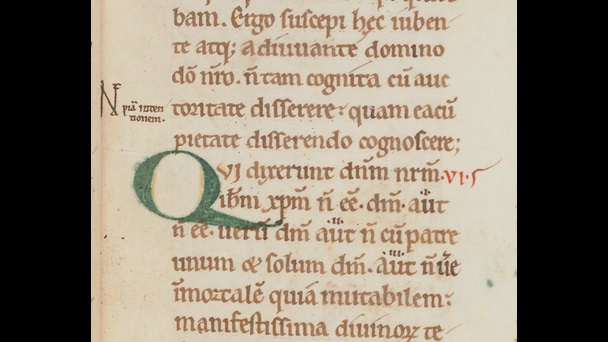 Marginal annotations were used to direct the attention of other readers to marked passages, and on occasion, to highlight to others theories that are difficult to understand or perhaps suspect.

Annotations were also used to clarify the text, for example supplying context, or providing structure by flagging the stages of a complex argument. The English De Trinitate copy features such clarifying annotations. For example, one marginal note gives a brief description of Bishop Aurelius of Carthage (d. c. 430), the subject of the main text and to whom St Augustine dedicated his work. A note in the left margin provides a brief description of Bishop Aurelius of Carthage (BnF, Latin 12204, f. 1v detail)

Marginal annotations and chapter headings enabled a manuscript reader to find passages quickly on subjects and themes of interest. Notes and signs were useful ways of highlighting passages in the text for later re-reading.

By the eighth century, reading aids already had a long history, but they continued to be developed in the Middle Ages by new authors, commentators and readers to serve their needs.