The French language before 1200

Hannah Morcos looks at how the vernacular of northern France evolved from a regional spoken language to a cross-European written medium between the 8th and 12th centuries.

The origins of the French language can be traced back to the Romans’ introduction of Latin to the Celtic-speaking inhabitants of Gaul. The next key development occurred following the arrival of the Franks in the fifth century, whose Germanic language influenced the local spoken Latin (‘Vulgar’ or common Latin).

In the Carolingian period, ecclesiastical reforms attempted to standardise written Latin, distancing the language of the Church from the spoken language. The Council of Tours held in 813 provides the earliest record of the distinction between the vernacular and Latin (as a written ‘high’ register), instructing the clergy to translate their sermons from Latin in rusticam Romanam linguam (‘into the ‘rustic’ Romance language’). This ‘rustic’ Romance language evolved into ‘Old French’, or the langue d’oïl (‘oïl’ was the word for ‘yes’ in northern France, as opposed to ‘oc’ the term used in the south), which became one of the most widely used languages of medieval Europe.

In the margins: early Old French

However, the sole surviving manuscript of the oaths was copied over one hundred years after their declaration (now BnF, Latin 9768). In fact, there are only a dozen or so examples of manuscripts with French texts up to the end of the 11th century, the earliest being the late ninth-century copy of the liturgical poem, the Sequence of Saint Eulalia (c. 880). To find additional written evidence of early Old French you need to look in the margins of eighth- and ninth-century Latin manuscripts, where contemporary readers added vernacular equivalents to explain more difficult or obscure Latin terms. 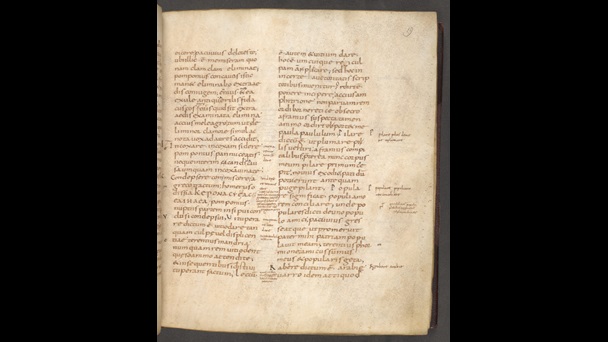 The need for a vernacular point of reference is apparent in a ninth-century manuscript of De compendiosa doctrina by Nonius Marcellus (now British Library, Harley MS 2719). This fourth-century dictionary was compiled from early Latin literature and the margins of this copy feature numerous glosses commenting on the entries. Whilst the contents of these glosses are predominantly in Latin, a handful of Old French terms occur. For example, a scribe has added next to the entry for rabere (to rave, be mad) ‘quod nos dicimus rauger’ (‘what we call rauger [= to go mad]’, f. 19r). The term assulatim (in splinters) is explained by: ‘ab asseribus. asseres sunt lates’ (‘with stakes; stakes/posts are lates [= laths]’, f. 34r).

In addition, another gloss features a word identified as Old Breton (the Celtic language of Brittany): next to strabones (cross-eyed people) is written ‘isti qui oblicum habent aspectum guelch’ (‘those who have a squinting look; guelch’, f. 13r). In each case, the scribe has drawn a box around the vernacular word, self-consciously highlighting the intrusion of the spoken ‘rustic’ language.

The importance of England in the history of French

Whilst written evidence of French is sparse up to the 11th century, the 12th century ushers in a period of remarkable change. The number of surviving manuscripts multiplies dramatically (see Careri and others, 2011), and significantly, over two thirds of these manuscripts are Anglo-Norman, the variety of French used in England following the Norman Conquest of 1066.

The unique socio-cultural and multi-lingual context of 12th-century England provided fertile ground for the early blossoming of Old French as a learned and literary language. Yet, this was not in isolation from the Continent. Political, religious, and cultural ties bridged the Channel, and patrons, authors, scribes, texts, and manuscripts frequently traversed its waters. 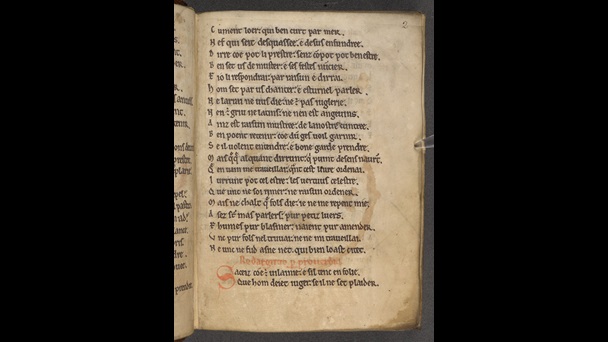 The earliest named French author, Philippe de Thaon (fl. 1113–1140?), was of Norman origin and active in England in the first half of the 12th century. His two signed works are preserved in a single volume, one of a handful of 12th-century manuscripts comprising only French texts (now British Library, Cotton MS Nero A V).

Philippe’s first work, the Comput (1113), is a verse summary of the medieval science of calculating the calendar. It is dedicated to his uncle, Hunfrei de Thaon, who was chaplain to Eudo Dapifer (d. 1120), seneschal of Henry I (r. 1100–1135). Philippe comments that he chose to write the Comput in the language ‘de la nostre cuntree’ (‘of our country’), positioning himself as a native speaker of French.

In the second text, his Bestiaire (c. 1121–1135), Philippe is more specific: he has translated the Latin Physiologus ‘en franceise raisun’ (‘into the French language’). Philippe’s translation is the oldest bestiary in French, a pseudo-scientific genre about animals, which offers Christian allegorisations of their characteristics. His Bestiaire is dedicated to Adeliza of Louvain (d. 1151), Queen of England and the second wife of Henry I.

As the language of the royal court and the aristocracy, there was a growing appetite for literature in French. Indeed, by the second half of the 12th century, under the reign of Henry II (r. 1154–1189) and Eleanor of Aquitaine (b. c. 1122, d. 1204), the English royal court was a flourishing centre of literature in French. The manuscript evidence of literary works is however minimal in comparison to other types of writing, notably devotional texts. 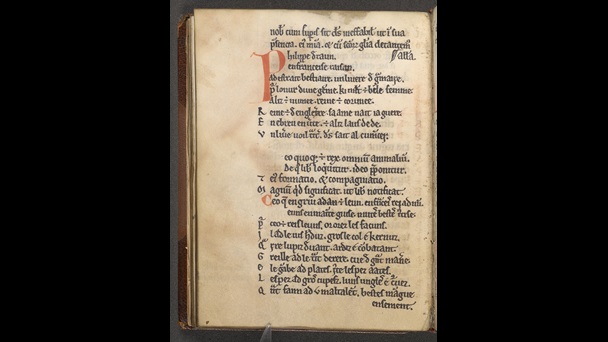 Anglo-Norman Psalters form the largest corpus of 12th-century manuscripts with French texts. A Psalter contains the Book of Psalms as well as calendars, Canticles, and other devotional or liturgical texts.

In England, there was already a long-standing tradition of Anglo-Saxon Psalters with Old English translations (usually in the form of interlinear glosses), which provided a precedent for the new non-native vernacular.

Unlike the vernacular of northern France, Old English was an established written language, used for administrative, religious, and literary purposes. After the Conquest, English continued to be spoken by the majority of the indigenous population, but Latin supplanted many of its previous written uses.

By the 12th century, French acquired a complementary status to Latin and the English monasteries had a particularly influential role in this development. 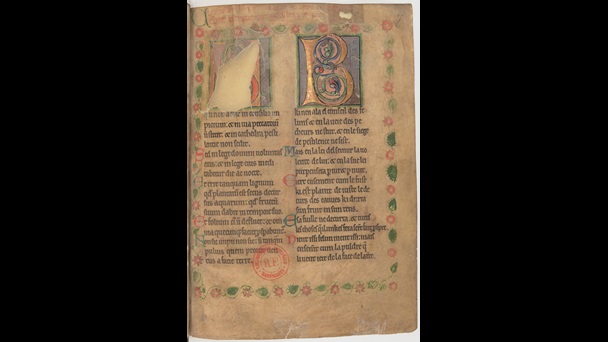 The earliest French translation of the Psalter was composed in an English monastery in the first half of the 12th century. In a copy of this Psalter, an Anglo-Norman prose translation is presented alongside the Latin text in parallel columns (BnF, NAL 1670). The two languages share almost the same status on the page.

The Canterbury (or Anglo-Catalan) Psalter (BnF, Latin 8846) offers an exceptional example of the presence of Latin, French, and English in late 12th-century England. This richly illuminated triple Psalter is closely related to an earlier 12th-century manuscript, the Eadwine Psalter (Cambridge, Trinity College, MS R.17.1). They were both made in Christ Church, Canterbury, and contain the three Latin Psalter texts translated by St Jerome (b. c. 347, d. 430) in parallel (Gallicanum, Romanum, and Hebraicum), with Anglo-Norman and Old English interlinear glosses. However, both the text and illumination of the Canterbury Psalter were unfinished, until the manuscript’s arrival in 14th-century Catalonia where the decoration was completed. 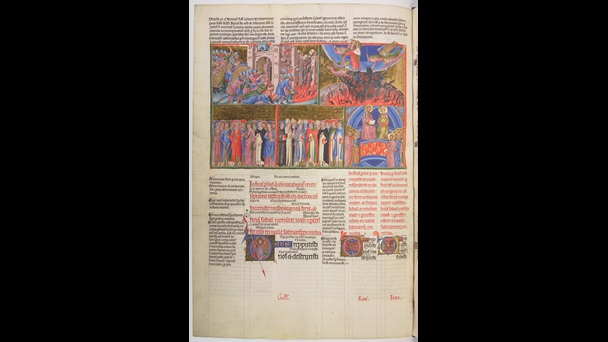 Whilst the Anglo-Norman gloss continues to the end of the extant Latin text, only a few remnants of the Old English translation were copied into the manuscript (ff. 103v, 109v, 135r, 154v). 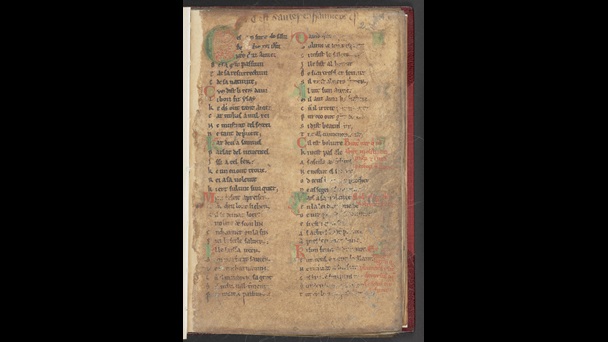 In contrast to this luxurious high-end product, another Psalter with Anglo-Norman French is a modest book of personal devotion (British Library, Harley MS 4070). This late 12th-/early 13th-century Psalter presents a very different relationship between French and Latin. The Psalter is paraphrased in Anglo-Norman verse and the corresponding Latin clauses are written in red ink at the start of each stanza, helping the reader to navigate the French text whilst invoking the authority of the biblical source.

French: the sixth language of England

By the early 13th century, French was also used as an administrative language in England. Indeed, Magna Carta was translated into French soon after it was sealed by King John (r. 1199–1216) in 1215. A collection of texts on the laws and customs of London in both Latin and French (now British Library, Add MS 14252) was copied during this same period. After the laws of the city of London in French (ff. 98r–101r), we find a French prose description of England (ff. 101r–104r), adapted from Henry of Huntingdon’s (b. c. 1088, d. c. 1157) Historia Anglorum. In addition to the five languages of England listed in the Latin source, French is identified as the sixth:

(You should also know that in Britain, which is now called England, there were five languages and I will tell you what they are: Breton and English and Scottish, Pictish and Latin – now there is the sixth that is called Norman and French – which were known by many people through the teaching of old texts.), f. 104r

Whilst its prominence as a language of England slowly declined in the centuries that followed, French had a lasting impact on the English language. Equally, from across the Channel, the precocious and wide-ranging 12th-century Anglo-Norman written culture played an undeniable role in the early history of French.

Laws of the Londoners 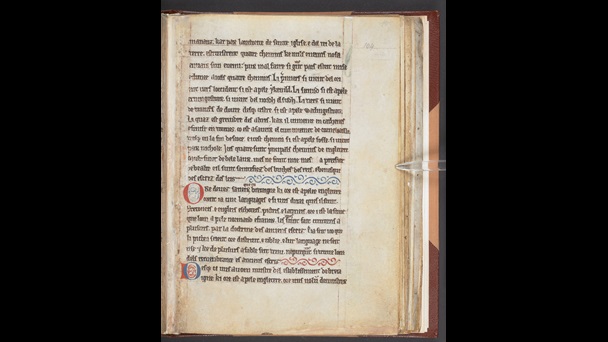