Charlotte Denoël provides insight into the historic collections of illuminated manuscripts now in the national library of France.

The Bibliothèque nationale de France (BnF) manuscripts digitised through The Polonsky Foundation England and France Project embody the outstanding tradition of medieval manuscript illumination and are also representative of the history of the French national library throughout the centuries.

The magnificent collections assembled by Charles V (r. 1364–1380) are the foundation of the French royal library, although much of his library was dispersed at his death. His successors Charles VIII (r. 1483–1498) and Louis XII (r. 1498–1515) seized and collected Italian manuscripts during their incursions into Italy. In 1501, Louis XII moved the library to the royal castle of Blois, and combined the Italian books with others in the library of his father Charles, Duke of Orleans (d. 1465).

This library formed the basis of the royal library assembled by later monarchs.  Francis I (r. 1515–1547) was particularly assiduous in expanding the royal collection with manuscripts and printed books, and moved the library to the palace of Fontainebleau. Louis XIV (r. 1643–1715) further enhanced the collection, assisted by his minister Jean-Baptiste Colbert (b. 1619, d. 1683), and his librarian Abbot Bignon. Manuscripts with the numbers Latin MSS 1-11,503 come from the former royal library. In 1720, the library that Charles IX had installed in Paris was moved to the grand palace constructed by Cardinal Mazarin (d. 1661), which is still part of the French national library. 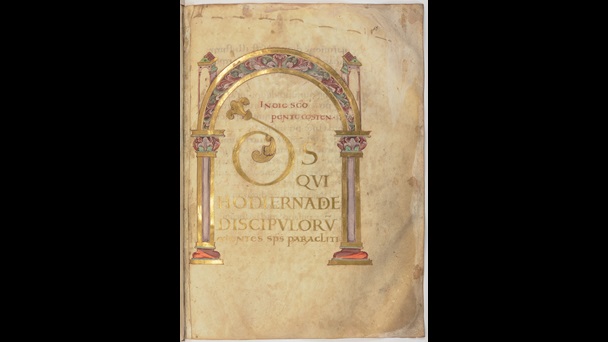 A marbled arcade frames the benediction for the feast of the Pentecost in the Winchester Benedictional, Colbert’s personal collection forms part of the library (BnF, Latin 987, f. 43r)

The magnificent Winchester Benedictional (now BnF, Latin 987) joined the library from the collection of Louis XIV’s minister Colbert. Other important collectors whose books have been digitised as part of this project include Archbishop of Reims Charles-Maurice Le Tellier (b. 1642, d.1710) who owned the elegant St-Martin of Tournai copy of the Epistles of St Gregory the Great (now BnF, Latin 2288) and François-Roger de Gaignières (b. 1642, d. 1715), who gives his name to the Gaignières Gospel Lectionary (now BnF, Latin 1126). 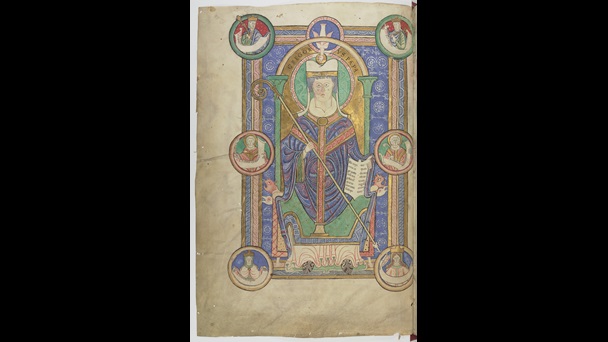 Author portrait of Pope Gregory seated on a throne with his name and office, Gregorius papa (Pope Gregory), written above his head (BnF, Latin 2288, f. 1v)

The French Revolution constituted another major stage in the prodigious expansion of the library, with the secularization of the properties of the church and nobility. Napoleon Bonaparte’s (b. 1769, d. 1821) military campaigns were accompanied by the confiscation of numerous manuscripts and books in bordering countries. Many of the religious texts included in this project were added to the national collection from monastic houses during this period, including a deluxe missal from St Denis (now BnF, Latin 9436), an abbey named for the first bishop of Paris.

Several manuscripts originating from the abbey of St. Germain des Prés have been digitised as part of the project, including two illuminated works. The Veneration of the Holy Cross of Rabanus Maurus (now BnF, Latin 11685) was copied in the mid-11th century and Origen’s Homilies on the Old Testament (now BnF, Latin 11615) was produced in the mid-12th century. Manuscripts with the numbers Latin MSS 11,504-14,231 were originally in the collection of this Abbey. Manuscripts from the abbey of St Victor are Llatin MSS 14,232-15,175, and those originally from the Sorbonne are Latin MSS 15,176-16,718. Manuscripts from Notre Dame in Paris and other important foundations are numbered as 16,719-18,613.

An illuminated copy of the Four Gospels was seized in Metz by the Benedictine historian and librarian Jean-Baptiste Maugérard on behalf of Napoleon, taken with another decorated Gospel-book (now BnF, Latin 9393 and Latin 9391). These manuscripts are now available to view in full online through The Polonsky England and France project. 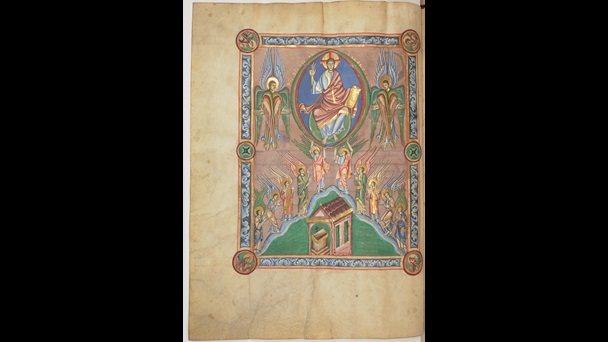