The origins of the British Library’s collections of manuscripts

The manuscript collections of the British Library are rich resources for understanding the literary and historical culture of the Middle Ages. Kathleen Doyle highlights the works digitised through The Polonsky Foundation England and France Project.

Before the establishment of the British Library in 1973, all the manuscripts digitised through The Polonsky England and France Project formed part of the British Museum Library. They are drawn from collections formed over the past 400 years: the ‘closed’ or historic collections that entered the Library together and to which no other manuscripts will be added; and the ‘open’ collections to which all new acquisitions of manuscripts are now added. As a permanent memorial and tribute to their contributions each volume from these ‘closed’ collections retains in its individual identifier or ‘shelfmark’ the name of the original collector.

The Harley collection was formed in two generations by the 1st and 2nd Earls of Oxford, Robert Harley (b. 1661, d. 1724), and his son, Edward Harley (b. 1689, d. 1741). The 2nd Earl’s widow and daughter sold the manuscripts to the nation for £10,000 (a fraction of their contemporary value) under the Act of Parliament that also established the British Museum. The Harley collection includes more than 7,000 manuscripts, 14,000 charters and 500 rolls, 127 of which have been digitised as part of this project, the largest number from any closed collection.

A phoenix collects twigs to build a funeral pyre (top image), then is consumed by fire (lower image), later rising from its own ashes (British Library, Harley MS 4751, f. 45r)

The Cotton collection was formed by the antiquary and politician, Sir Robert Bruce Cotton (b. 1571, d. 1631), and augmented by his son, Sir Thomas Cotton (b. 1594, d. 1662), and grandson, Sir John Cotton (b. 1621, d. 1702). Sir John bequeathed the entire collection of manuscripts to the nation ‘for Publick Use and Advantage’, and the library became part of the British Museum upon its creation in 1753. The Cotton collection at the British Library comprises more than 1,400 manuscripts and over 1,500 charters, rolls and seals, and reflects Sir Robert’s deep interest in English history. The importance of his collection is reflected in fact that 61 manuscripts featured in this project are Cotton manuscripts, such as Ælfwine’s Prayer book (now Cotton MS Titus D XXVI). Cotton’s manuscripts retain in their shelfmarks an echo of their placement in his library, on a particular shelf under a bust of a Roman emperor or other personage. 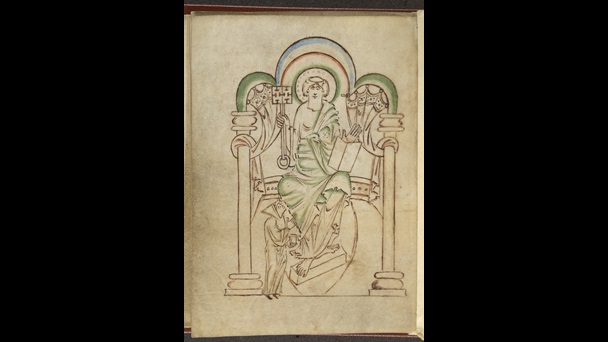 The executors of Sir Hans Sloane (b. 1660, d. 1753), the physician, scientist and collector, sold his vast collection of plants, animals, antiquities and books and manuscripts to the nation in 1753, bringing about the foundation of the British Museum. The manuscript collection of Sir Hans Sloane reflects the breadth of his learning, as well as his particular interest in medicine and natural history. Nine of them are included in the project.
Together with the Cotton collection and that of Robert and Edward Harley, the Sloane collection is one of the three foundation collections of the British Library.

The Royal collection includes nearly 2,000 manuscripts, the majority of which are illuminated. 33 manuscripts are featured in the project, including an English illuminated author portrait (now British Library, Royal MS 10 A XIII/1). The Royal collection, now typically referred to as the Old Royal Library to distinguish it from the current royal library kept principally at Windsor Castle, was housed together with the Cotton collection in the 18th century, and presented to the nation in 1757 by George II.

Portrait of St Dunstan as a bishop 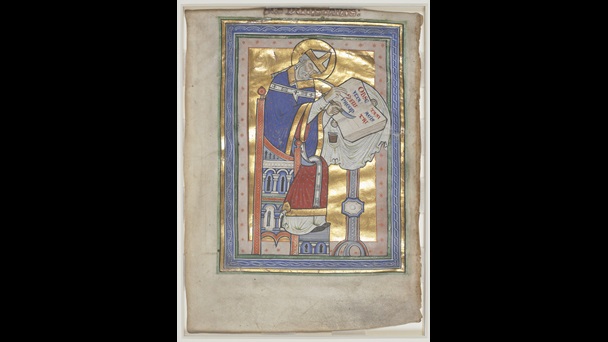 An author portrait of St Dunstan in the act of writing (British Library, Royal MS 10 A XIII/1, f. 2v)

Thomas Howard, 2nd Earl of Arundel (d.1646), amassed the first major British art collection, which included painting, sculpture, and manuscripts. In 1666 his grandson, Henry Howard, divided the library between the Royal Society and the College of Arms. In 1831 the British Museum purchased the Royal Society’s share of more than 500 manuscripts. 23 important Arundel collection manuscripts have been digitised for the project, including a lavishly illuminated Psalter made in Oxford that includes an extensive prefatory cycle of images from the life of Christ (Arundel MS 157). 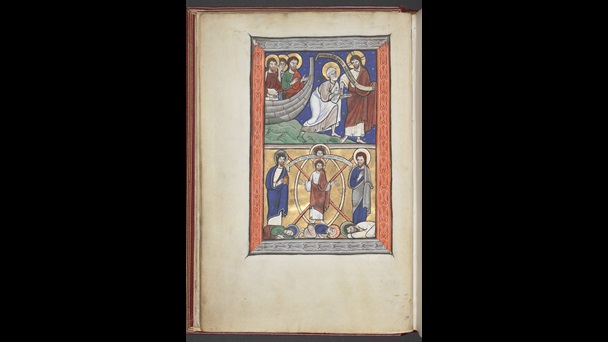 In September 1818 a large consignment was transported from the London suburb of Deptford to the British Museum. It included 7,000 prints, 1,800 volumes of newspapers, 1,400 books, including 350 volumes of newspaper cuttings and playbills, and 525 manuscript volumes. For the purchase of this large collection the British Parliament had previously voted a special grant of £13,500. Out of this grant £2,500–3,000 covered the cost of the 525 manuscripts.

The person responsible for amassing this large collection was Charles Burney (b. 1757, d. 1817), son of the famous music historian Charles Burney and brother of the novelist Fanny Burney, and in his own right one of the most renowned scholars of classical Latin and Greek language and literature in his time. Seven Burney manuscripts are included in the project.

Henry Davis’s (b. 1897, d. 1977) collection of around 800 bindings includes several original medieval bindings; two of which are featured in the project. The collection was donated to the British Museum in 1968.

The manuscripts collected by William Petty, 1st Marquess of Lansdowne (b. 1737, d. 1805); also known as Lord Shelburne) were purchased for the British Museum with a parliamentary grant in 1807. The collection is better known for its holdings of modern political papers than its illuminated medieval manuscripts, despite the distinction of its medieval material. Two Lansdowne manuscripts are included in the project.

The Yates Thompson collection of 52 manuscripts comprises the smallest number of manuscripts of any of the named collections in the British Library, but it is also one of the most important for illuminated manuscripts. Henry Yates Thompson (b. 1838, d. 1928) planned to have a collection of the finest one hundred manuscripts he could obtain.  As he described it: ‘My plan has been never to buy any additional volume unless it was decidedly superior in value and interest to at least one of my original hundred, and upon its acquisition pitilessly to discard the least fascinating of the said hundred.’ One of his manuscripts, a late 12th-century copy of Peter Lombard’s Sentences, is included in the project (Yates Thompson MS 17).

After the Harley collection, the Additional collection provides the most volumes from the British Library included in the England and France project (110). Currently numbering over 90,000 items, the Additional collection comprises manuscripts acquired by gift, purchase or bequest since 1756, excepting some large collections that retain the name of their former owner or library, or that are purchased with the Egerton fund. The numbering of Additional manuscripts begins at 4101, following on from Sloane manuscripts 1–4100. New acquisitions of Western manuscripts take the next sequential numbers available in the series.

Many of the Additional manuscripts included were acquired during the tenure and through the efforts of Sir Frederic Madden, Keeper of Manuscripts in the British Museum from 1837 to 1866, ‘a giant of Victorian scholarship’. To his remarkable discernment we owe the acquisition of the two earliest French books digitised through the project, the Merovingian biblical commentary (Add MS 31031) and the beautiful Tours Gospel-book (Add MS 11849). Others are the Préaux Gospels (Add MS 11850), a copy of the Rule of St Benedict (Add MS 16979), and the Encomium Emmae Reginae (Add MS 33241). 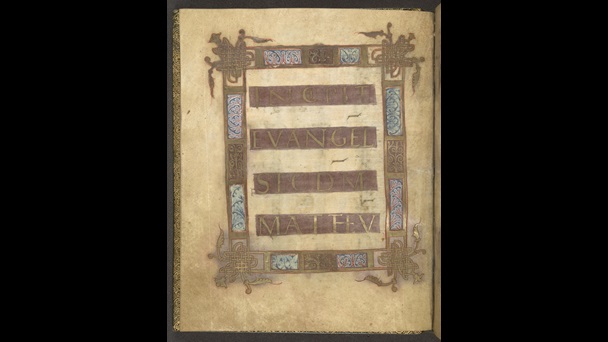 In 1829 Francis Henry Egerton, 8th Earl of Bridgewater, bequeathed to the British Museum 67 manuscripts and £12,000 to establish the Bridgewater Fund for purchasing manuscripts. In 1838 his cousin, Charles Long, Baron Farnborough, established the Farnborough Fund with a bequest of £3,000 to supplement the Egerton collection further. In the 175 years since its foundation, the fund has purchased more than 3,800 manuscripts, 24 of which are included in the project.

Like the Additional collection, the Egerton manuscripts are miscellaneous in nature. It has particular strengths in manuscripts of Irish and Spanish interest, and is distinguished in its holdings of literary and illuminated manuscripts.

McKendrick, Scot, The Burney collection of manuscript in the British Library, Catalogue of Illuminated Manuscripts, https://www.bl.uk/catalogues/illuminatedmanuscripts/TourBurney.asp, accessed 9 May 2018

Doyle, Kathleen, ‘‘Preserved and Transmitted for the Good of Posterity’: The Transfer of the Old Royal Library from a Palace to a Museum’, in 1000 Years of Royal Books and Manuscripts, ed. by Kathleen Doyle and Scot McKendrick (London, 2013), pp. 179–212

Barker, Nicholas and others, Treasures of the British Library (London, 2005)