Works of the Church Fathers

The writings of the Church Fathers formed the central core of books copied and owned by medieval monasteries after the Bible. Chantry Westwell provides an introduction to these formative works of the early Christian Church and to the manuscript copies produced.

The writings of the early Fathers of the Western Church: Saints Ambrose (b. 340, d. 397), Jerome (b. 347, d. 420), Augustine (b. 354, d. 430) and Gregory (b. 540, d. 604) are known as patristic texts. These foundational texts were considered essential teaching guides and authoritative reference works on the Scriptures and the conduct of religious life. Over 150 manuscripts containing works of the Church Fathers have been digitised in The Polonsky Foundation England and France Project.

Under the monastic Rule of St Benedict (b. c. 673, d. 735), a set of practical and spiritual guidelines for Benedictine communities, study and reading should be as much part of daily practice as divine worship and manual labour. Early library catalogues of important institutions such as Rochester Cathedral Priory and the abbey of Bury St Edmunds in England list the works of the Church Fathers after copies of the Bible. This is also true of French monastic libraries, such as the Cistercian abbey of Clairvaux in Burgundy.  In the Norman monasteries of Fécamp and Mont Saint-Michel, numerous copies were acquired under the influence of William of Volpiano (d. 1031), the Piedmontese monastic reformer and ecclesiastical architect to Richard II of Normandy (d. 1026).

In the 12th century a concerted programme of book production by monks and monastic communities in both England and France led to a significant increase in the number of books owned by monasteries and cathedrals. The reorganisation of monastic scriptoria and replenishment of libraries was part of a greater expansion and renewal of religious communities and religious life in Western Europe at this time, and the close links between monasteries in France and England meant that similar patterns of copying and collecting can be discerned.

What were these books like and who copied and used them? Surviving manuscripts from both sides of the Channel help to build up a picture of these phenomena.

Works of St Augustine of Hippo

The works of St Augustine tend to be the most numerous of the Church Fathers in the 12th-century libraries for which records survive, accounting for 18 out of 204 books in the inventory of Reading Abbey in c. 1192. In a list of books owned by the abbey of Jumièges in Normandy reconstructed from medieval catalogues and surviving manuscripts, 22 contain works by St Augustine, 12 by St Gregory, eight by St Jerome and seven by St Ambrose.

St Augustine is perhaps the most significant Christian thinker after St Paul, shaping the practice of biblical study and laying the foundation for much of medieval  Christian thought.  In a massive body of writing, of which the most influential works are his Confessiones (Confessions), De Trinitate (On the Trinity) and De civitate Dei (The City of God), he adapted classical methods to Christian teaching, creating a powerful theological system of lasting influence.

In his treatise, De Trinitate, he emphasised the resemblance between God and man and the ultimate role played by faith. In monastic communities such as Norwich and Fécamp there are records of it being read at mealtimes throughout the week following Trinity Sunday.

A small workaday book in a clear, even script from St Albans Abbey (now British Library, Egerton MS 3721) is a good example of a monastic copy of St Augustine’s writings. It contains additional material that makes it of particular interest. 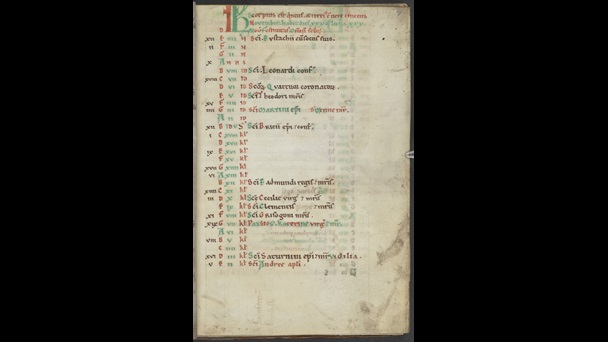 Calendar page for November with the feast day of St Katherine in red and green in a 12th-century manuscript from the Benedictine Abbey of St Albans (British Library, Egerton MS 3721, f. 7r)

On the opening pages is a calendar that was copied separately and bound together with the main text at an early date. It includes saints and feast days specific to St Albans, with an entry that enables fairly precise dating. The feast day of St Katherine (25 November), also the day of ordination of Abbot Geoffrey de Goron of Le Mans (d. 1146), is marked in red and green only, whereas most of the entries are predominantly in brown ink. He reigned from 1119 to 1146, so the calendar was probably copied between these dates. This was a period of extensive book production at St Albans, when increased financial resources were devoted to the scriptorium. St Albans was one of the foremost Benedictine abbeys in England for most of the medieval period, with numerous dependent houses that it also supplied with books. It was a leading centre of learning, renowned for its book-production, and had one of the most extensive libraries in medieval England, of which 150 books survive today. 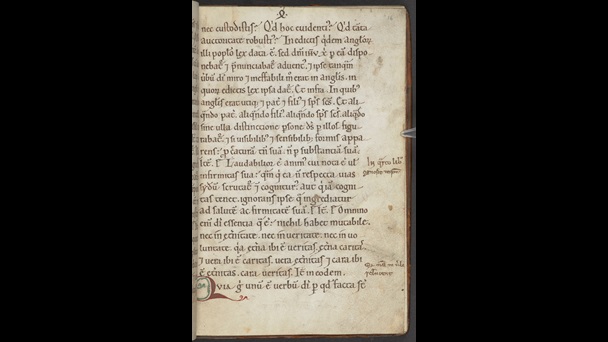 The De Trinitate text in this volume has paragraph numbers and notes in some parts, indicating regular use.  It ends abruptly on the recto of the last folio, part way through book 15 (of 28 books in total), and an unusual poem on the colours of the 12 precious stones forming the Heavenly Jerusalem has been added. This suggests that the book could have been used at one time by an individual who added a favourite meditative text at the end, though there is no indication why the St Augustine text was not completed.

Centuries before the Norman era and the Benedictine reform, patristic texts were already key components of libraries on either side of the Channel, and books are known to have travelled between Britain and the Continent, where they were used as exemplars for copying in a leading religious institution like Cluny in central France. The foundations of what was to become one of the most important libraries in Europe were laid soon after it was established in 910. A catalogue of books circa 1100 lists 570 volumes, and a significant number of these contained patristic texts. In the latter part of the 10th century, Abbot Majolus of Cluny (r. 956–994) copied a collection of St Augustine’s works, now British Library, Add MS 11873. This manuscript was listed in a mid-12th century catalogue of Cluny manuscripts and probably remained there until the dispersal of the library in the 18th century, when it was acquired by an English collector. 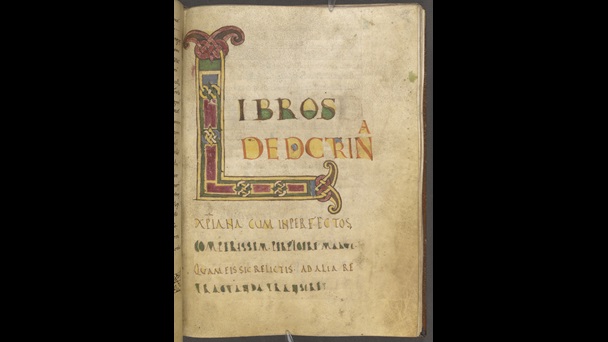 St Ambrose, a powerful political figure in imperial Milan, became bishop in 373. His deep spirituality and oratorical skill made him one of the greatest preachers of the early Church, and his Christian writings in the classical tradition were aimed at educated Roman citizens. He composed two of the first great theological works written in Latin, De Sacramentis (On the Sacraments) and De Spiritu Sancto (On the Holy Spirit), as well as numerous sermons and treatises on the spiritual life and the moral obligations of the clergy.

Seven of St Ambrose’s works have been compiled in a volume that was copied in the latter part of the 11th century in two Norman abbeys, both part of the province of Rouen but separated by more than two days’ walk.

Collection of works by St Ambrose 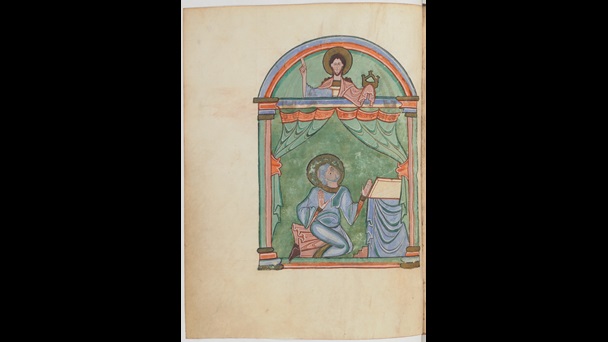 The first part, with the sermon De bono mortis (On a good death), was made and decorated in the Abbey of Mont-Saint-Michel (BnF Latin 2639, ff. 31-54). It has an image of St Ambrose kneeling before an altar, receiving Christ’s benediction and an initial with plant and animal motifs, by an artist of Mont-Saint-Michel.

Shortly afterwards, six additional texts, were added by Antonius, a monk of the Abbaye de la Trinité, Fécamp, who also made corrections to the earlier part. At the end of the 12th century the volume was listed in the Fécamp catalogue. The two houses had close links: William of Volpiano, who had established Fécamp Abbey, designed the Romanesque church of Mont-Saint-Michel in the 1060s.

Collection of works by St Ambrose 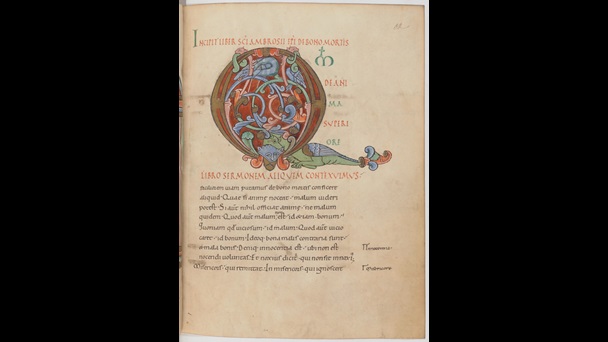 An initial with plant and animal motifs at the beginning of De bono mortis (On a good death) (BnF Latin 2639, f. 32r)

St Jerome’s greatest work, the Latin translation of the Vulgate Bible, became the fundamental Christian text throughout the medieval and early modern periods. St Jerome was also a prodigious translator of earlier authors such as Origen (b. c. 184, d. c. 253) and Eusebius (b. c. 263, d. c. 340) and produced a large body of homilies and commentaries as well as letters, many addressed to St Paula (b. 347, d. 404), with whom he founded a double monastery for monks and nuns in Bethlehem in the late fourth century.

The Abbey of St Peter, Corbie was founded by Bathilde (b. c. 626, d. 680), the widow of Clovis II (r. 639–657) in c. 660. It was an important centre of copying in the distinctive Corbie script in Charlemagne’s empire (r. 768–814). By the mid-12th century it had become less influential than the larger abbey of Cluny, but manuscripts were still being produced there, some by a scribe and illuminator known as Ingelrannus, who is known for his initials with elaborate decoration. This volume contains St Jerome’s commentary on Ecclesiastes, followed by his translations of works by Origen, and has a 12th-century ownership inscription of Corbie Abbey.

St Jerome, Commentary on Ecclesiastes and Translations of Origen In a full-page miniature preceding the text, Ivo, the presbiter or monastic priest, of Corbie and the commissioner of the book, is shown prostrated at the feet of St Jerome, who is seated at his desk with St Paula, and her daughter, Eustochium (b. c. 368, d. c. 419), on either side of him. This image is perhaps a homage to Bathilde, founder of Corbie, who was closely associated with Luxeuil and Chelles, two double houses (for men and women) in northern France.

Works of Gregory the Great

Pope Gregory I was a reformer of the early Church who sent missionaries to convert the pagans of Northern Europe, including the Anglo-Saxons. His writings offered practical wisdom for medieval Christians and were popular and influential, particularly his Curia pastoralis (Pastoral care), a guide for rulers, and his Moralia in Job (Commentary on Job), a work of moral theology. The evidence of Anglo-Saxon book collections, though sparse, points to Gregory, along with Isidore of Seville (b. 560, d. 636), as by far the most popular authors.

St Gregory’s works were still widely copied in the 12th century, including a two-volume set of the Moralia in Job from the library of St Andrew, Rochester, a Benedictine cathedral priory. The ‘Textus Roffensis’ from c. 1123, one of the earliest English library catalogues, contains 93 volumes, including this work, listed as no 45. 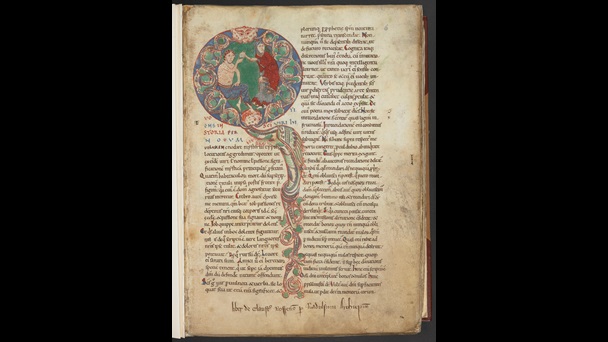 An initial with Job on the dunghill and ownership inscription at the beginning of the Moralia in Job (Commentary on Job) (British Library, Royal 6 C VI, f. 6r)

The second in a two-volume set (British Library, Royal MS 6 C VI) contains the latter part of the Moralia, followed by the notes of Lanfranc who came from Bec in Normandy to be archbishop of Canterbury in 1070. An inscription provides important information as to how this work entered the Rochester library: it was donated by Ralph d’Escures, Bishop of Rochester from 1108 to 1114 and afterwards Archbishop of Canterbury. In the 14th century the Rochester ownership inscription Liber de Claustro Roffensis (‘Book of Rochester Priory’) was written on the first page of the Moralia beneath a large initial containing an image of Job on the dunghill, one of three decorated in a Rochester style, but with Norman influence.

As some of the most important works copied and owned by medieval monastic institutions, these books provide evidence of the shared leadership, liturgy, art and intellectual life of communities on both sides of the Channel.

The Cambridge History of Libraries in Britain and Ireland: Volume 1, to 1640, ed. by Elisabeth Leedham-Green and Teresa Webber (Cambridge: Cambridge University Press, 2006).