Music played a central role in Christian liturgy throughout the Middle Ages. Nicolas Bell describes the evidence for this music in manuscripts made before 1200.

Over the course of the Middle Ages there were many experiments and gradual refinements in the ways of writing down music on the page. The first musical notations in Western Europe were developed in the ninth century as a direct result of the church reforms which had begun in the eighth century. For the first time it had become desirable not only to codify the texts prescribed across Europe for use in public worship, but also for their melodies to be sung in a standardised way. Throughout the period up to 1200, musical notation was most often used in books of the liturgy, and the vast majority of surviving music is therefore found in books of chants to be sung in divine service. But notation also came to be used in a variety of other contexts, such as examples in music theory treatises, and to record the melodies of secular poems in Latin or vernacular languages.

The earliest notations have considerable variety in their appearance, as different scribes took quite different approaches to the problem of how to represent sounds on the written page. Local practices were quickly established, and we can therefore often use the appearance of  the notation to help determine where and when a manuscript was created. The graphic signs used in the earliest manuscripts are known as ‘neumes’ – from the Greek word neuma meaning ‘sign’ – and generally show movement upwards or downwards. The two basic neumes which underpin most others are the virga, an upward stroke which signifies a relatively high pitch, and the punctum, a plain point or dot which shows a relatively lower pitch. In Fig 1 these two signs can be seen in abundance, recording the simple melody of the chant ‘Exultet’ from the Easter Vigil Mass. 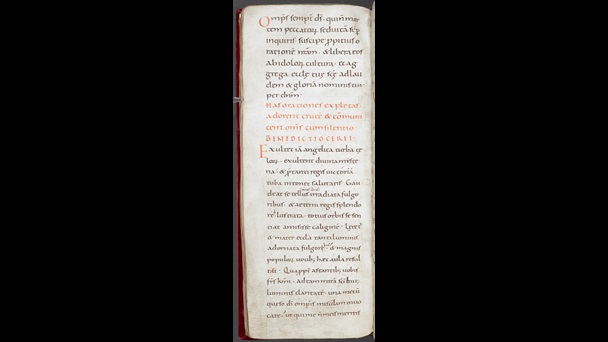 Because neumes show movement rather than actual pitch, it is not possible for us to know the precise shape of a melody written with this notation: the virga shows that a note is higher either than the note preceding it or than the note following it, while the punctum may be a note lower than or equal to its neighbours. The distance between the two pitches is not specified, either: they could be a tone or semitone apart, or a larger interval of a third, fourth or fifth. This means that it is impossible to decipher early neumes into modern stave notation. At first sight this might appear to be a failing in the way the system of neumes was first envisioned, but in fact it shows a difference in purpose. Whereas modern musical notation is designed to record every detail of the pitch and rhythm, neumes are intended more to serve as a reminder or a prompt to a singer who already knows a melody by heart.

In fact, neumatic notation can show much more than simply the direction of a melody up or down. A wider repertory of signs could show particular nuances of interpretation, such as extra emphasis on a particular note, ornamental flourishes, or an instruction to close the palate with the tongue when singing a liquescent consonant such as ‘l’, ‘m’ or ‘n’. The wide range of neumes seen in Fig2 demonstrates all of these elements as well as various others. This presents an interesting anomaly: from the time of their earliest invention, neumes showed a greater sophistication than is allowed by modern musical notation for recording nuances of performance, while remaining incapable of displaying basic details of the relation between pitches. 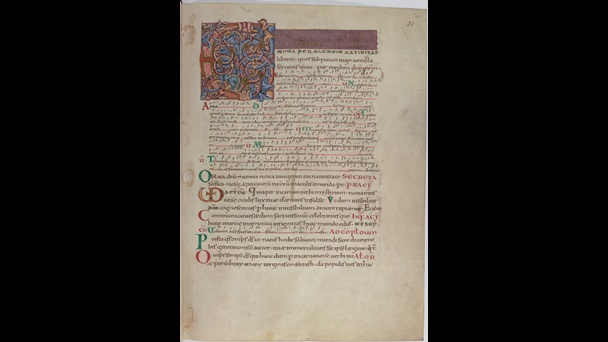 Figure 2. Missal of the abbey of Saint-Denis, mid-11th century. This page includes the chants for the mass of Christmas day (BnF, Latin 9436, f. 20r)

The problem of pitch is a major encumbrance for anyone hoping to sing from an early medieval manuscript. In some northern French notations from the eleventh century onwards scribes would make some attempt to indicate the relative pitch of notes by placing them a little higher or lower than one another on the page, but this was by no means a universal practice. A quite different approach was taken in the Aquitaine region of the south of France, where music was written mainly in small individual points at precisely determined heights above the text to show particular pitches, as if plotted on a graph. One of the finest chant manuscripts in Aquitanian notation is the Toulouse Gradual (Fig 3), in which the parchment has been ruled with a dry stylus at a mid-point between the highest and lowest notes. This ‘point-notation’ is very wasteful of space on the page, and lacks some of the nuances of the neumatic notations, but has the advantage of showing relative pitches more clearly. 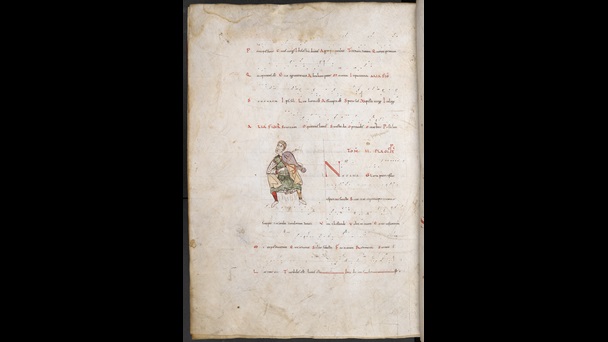 Figure 3. Gradual (book of chants for the Mass) from the cathedral of St Etienne in Toulouse, late 11th century. This page is taken from the tonary, an appendix to the Gradual consisting of chant melodies grouped together according to the eight modes as a means of understanding their common features. The figure is a personification of the second mode (British Library, Harley MS 4951, f. 297v)

During the 12th century, the idea of using vertical alignment to show pitch gradually took hold in other places too. The horizontal lines first ruled with a dry point came to be drawn in red ink, and by the 13th century it became standard to rule four or even five lines for different pitches, using a letter to show which line corresponded to which pitch. The stave and the clef remain in use virtually unchanged to this day. The earliest manuscripts with ruled stave-lines are particularly valuable because they preserve the neume-forms of earlier times, with all their nuances of interpretation, stretching them onto the frame of the stave to show the pitches at which to sing them. By the end of the 12th century most of these nuances were lost, as the note shapes became more stylised and square in format, corresponding to the changes in letter-forms as Gothic script emerged as the standard book-hand of the later Middle Ages.

Before the invention of the stave another method was occasionally used to indicate pitches: the name of each note was written above the syllable of the text. This alphabetic notation is a rather basic method of recording a melody, and is mainly found as a didactic tool, but in a small number of surviving examples it is combined with neumes to provide the interpretative details to complement the names of the pitches. An example is Fig4, in which a group of verses on the Trinity have been given both forms of notation, enabling us to reconstruct the melody in all its detail. 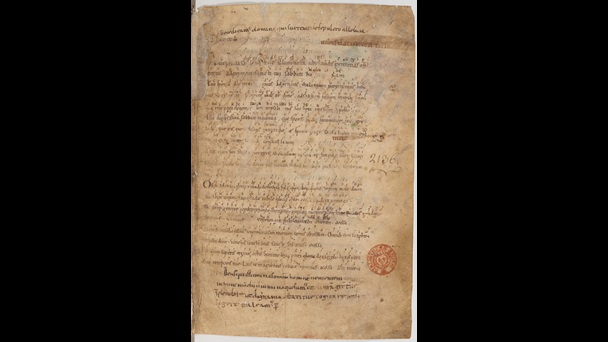 Figure 4. Alphabetic notation combined with neumes in a group of otherwise completely unknown verses for the feast of the Trinity, added in the 11th century to a blank page of a manuscript of Cassian from the monastery of St Wandrille in Normandy (BnF, Latin 2136, f. 1r)

All of the examples so far discussed were written in France, but similar practices were found in England at the same time, especially in the major monastic centres. The close connections formed by the monasteries of Normandy and Britany with England after the Norman Conquest often make it difficult to determine with any certainty whether a manuscript was notated in England or France, as several of the standard features of northern French neumes became equally prevalent in England. Earlier in the 11th century, however, a very distinctive form of Anglo-Saxon notation was more common in England. The ascending strokes of Anglo-Saxon neumes are drawn with a much more vertical aspect, and the repertory of signs betrays great sophistication and a rich expressive range. One of the finest examples may be found in the Caligula Troper (Fig 5), a collection of newly-composed chants intended to supplement the standard chants sung in the Mass as a means of giving a specific local identity to the liturgy of a community. It is unfortunate that most of these local musical practices did not remain in use until the advent of notation on staves, and that it is therefore not possible to recreate these unique musical creations of Anglo-Saxon England with any certainty. 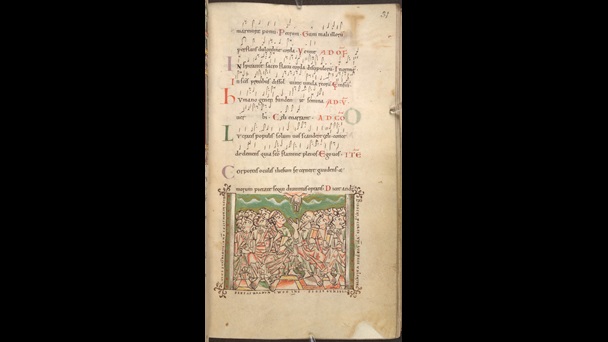 Almost all of the music written in manuscripts before 1200 was sung by unaccompanied voices in church services, but there are occasional survivals of other types of music. No instrumental music was written down before the 13th century, but our main evidence for instruments of the time comes from the depictions of musicians which often illuminate the margins of manuscripts. Musical notation is sometimes found in medieval manuscripts of classical poets, especially Horace and Virgil, where it may have had the purpose of helping readers to understand the metres of Latin poetry by setting the verses to music. There are various collections of secular songs, in Latin and in vernacular languages, but it is only at a later period that the music was written down as well as the words. Instead we must be content with occasional chance survivals of music from outside the liturgy. On such example Fig6 is a song about the signs of the zodiac, the words of which are known from several sources but only in this Parisian manuscript are they accompanied by neumes, as well as a fine illustration. 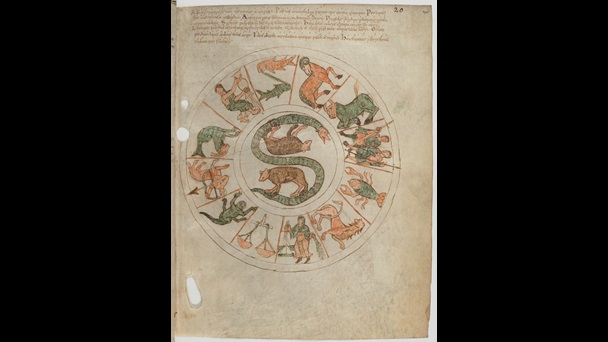 Figure 6. A representation of the signs of the zodiac is accompanied by a song on the same subject. From a collection of calendrical and other texts assembled at the abbey of St Germain des Prés, Paris, in the mid-11th century (BnF, Latin 13013, f. 20r)

Musical notation is found in almost one hundred of the manuscripts digitised in the project Medieval England and France, 700–1200 funded by The Polonsky Foundation. For the first time it is now possible to make a detailed comparative study of the earliest French and English notations from the two major repositories for these precious survivals of a rich musical culture.