A close reading of Chaucer's ‘The Merchant’s Prologue and Tale'

Jenny Stevens introduces 'The Merchant's Prologue and Tale', exploring the way in which it combines literary genres and traditions, and refuses to give the reader a clear moral or message.

The Canterbury Tales is a work of great originality and daring. The poem’s ‘General Prologue’ sets out its main structural design: each of the pilgrims gathered at the Tabard Inn will tell two tales, one on the outward journey and one on the return, the best storyteller being rewarded with a good supper. With around 30 pilgrims on board (the precise number is unclear from the extant manuscripts), bringing such a design to completion would have required well over a hundred stories. In fact, the ten surviving fragments of the poem include just 24 tales – an incompleteness that raises some intriguing, if ultimately unanswerable, questions about the author’s writing life and intentions.

John Lydgate, Troy Book and The Siege of Thebes 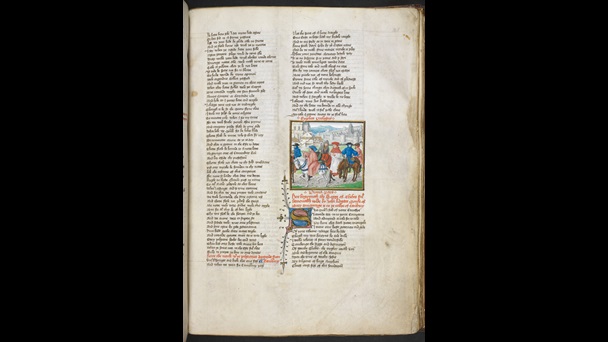 The pilgrims setting off for Canterbury from a manuscript of John Lydgate’s Siege of Thebes.

Geoffrey Chaucer’s compendium of tales offers a rich diversity of characters, subjects and genres, creating a vivid, dynamic picture of contemporary England. The Merchant, representing the middle-class world of commerce, tells an intriguing and complex tale, engaging with one of the poem’s most commonly debated topics: marriage.

Chaucer takes on the alter ego of one of the ‘sondry folk’ (Book I, l. 25)[1] setting out for the shrine of Thomas Becket. Through the broadly non-judgemental voice of an unnamed narrator, he promises to describe each of his fellow travellers:

Me thynketh it acordaunt to resoun
To telle yow al the condicioun
Of ech of hem, so as it semed me,
And whiche they weren, and of what degree,
And eek in what array that they were inne (Book I, ll. 37–41)

The Merchant’s ‘array’ is clearly intended to impress. His ‘mottelee’ (Book IV, l. 271) and ‘Flaundryssh bever hat’ (Book IV, l. 272), signalling wealth and sartorial style, mark him out as the successful foreign trader. His ‘forked berd’ (Book IV, l. 270), too, can be taken as a signifier of up-to-the-minute fashion savvy, though it can also be read as a satirical indicator of duplicity. Similarly open to interpretation is the narrator’s comment that ‘[t]her wiste no wight that he was in dette’ (Book I, l. 280), a line that some scholars regard as suggestive of a dodgy dealer. However, some historical readings interrogate such a view, arguing that ‘Chaucer must have recognized through his own experiences … that a merchant’s perceived credit worthiness was central to his business’,[2] and keeping quiet about debt was the tactic of any sensible trader. Ultimately, it is left for the reader to decide how far to trust Chaucer's choice of ‘worthy’ as an epithet for the Merchant.

The Ellesmere Manuscript (The Canterbury Tales) 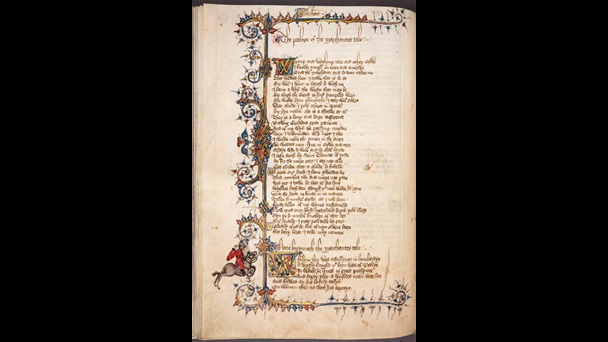 An illustration of the merchant from the Ellesmere manuscript.

The Merchant and marriage

In addition to the impressions of the tale-tellers given in the ‘General Prologue’ are those conveyed through the poem’s various prologues, epilogues and connecting links. There is no doubting the anti-feminist sentiments of the Merchant as he complains bitterly in his own prologue:

I have a wyf, the worste that may be;
For thogh the feend to hire ycoupled were,
She wolde hym overmacche (Book IV, ll. 1218–20)

Yet such clear and unequivocal feelings become increasingly complicated when, just 20 or so lines into the main story, the Merchant digresses to deliver a stirring encomium to marriage. Why a storyteller claiming to have suffered marital torments should then declare a wife to be ‘Goddes yifte verraily’ (Book IV, l. 1311) is one of the Tale’s interpretive challenges, alerting the reader to one of its most distinctive qualities: the tonal complexity of the narrative voice.

The Canterbury Tales by Geoffrey Chaucer 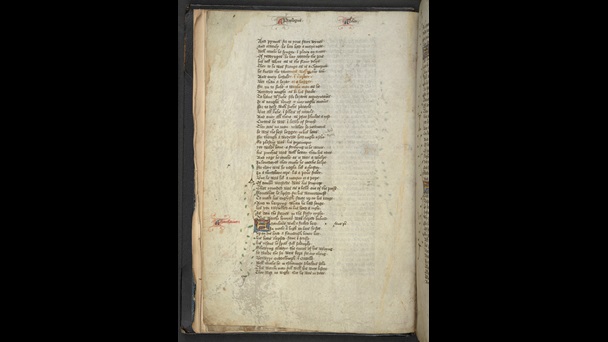 The Merchant’s prologue from a manuscript of The Canterbury Tales.

If the hyperbolic praise of wives sounds somewhat incongruous coming from the Merchant, it finds a more fitting place in the mouth of the 60-year-old knightJanuary, who, convinced that the marital state is one of ‘parfit felicitee’ (Book IV, l. 1642), decides to leave behind a lifetime of promiscuity and take a wife. Undeterred by the advice of anti-feminist authorities, and by his brother Justinus’s warning that a wife will prove his ‘purgatorie’ (Book IV, l. 1670), January chooses to wed the aptly named May, whose youthful beauty is exchanged for the old knight’s status and wealth. Within days of marrying, May forms a liaison with the household servant, Damyan: a highly familiar scenario to Chaucer’s original audience.

The love triangle of the senex amans (Latin for ‘aged lover’), the nubile young wife and the virile squire was a stock storyline of the fabliau genre (brief, comic stories, focussing on the bawdy). The Canterbury Tales include several fabliaux, their vulgar presence serving to offend the sensibilities of readers down the ages. ‘The Merchant’s Tale’ offers plenty to repel the squeamish reader: January’s ‘slakke skyn’ (Book IV, l. 1849) shaking about his neck as he sings in triumph after the wedding night; the rubbing of his ‘berd unsofte, / Lyk to the skyn of houndfyssh’ (Book IV, l. 1824–25) against May’s tender face as ‘he kisseth hire ful ofte’ (Book IV, l. 1823). Such graphic close-ups did not sit well with the poet Alexander Pope, whose 1709 rewriting, January and May; or the Merchant’s Tale from Chaucer, sidesteps the grotesque union of youth and age:

By this the sheets were spread, the bride undress’d,
The room was sprinkled, and the bed was bless’d.
What next ensu’d beseems not me to say.

If the original Tale bears the earthy hallmarks of the fabliau, other quite different linguistic and narrative characteristics complicate any simple generic categorisation. Richly allusive, it weaves the biblical and the classical into the mercantile world of medieval Lombardy (a region in northern Italy). The poetry of the Song of Solomon is transformed into ‘olde lewed wordes’ (Book IV, l. 2149) in the mouth of the lecherous January and the mythological figures of Pluto and Proserpina, who inhabit January’s garden and debate gender politics in a manner more reminiscent of the Wife of Bath railing against her scholar-husband’s ‘book of wikked wyves’ (Book III, l. 685) than rulers of a fairy kingdom. Indeed, at such moments in the story it is easy to forget that the Tale is set in the courtly world of knights, squires and gentlewomen. 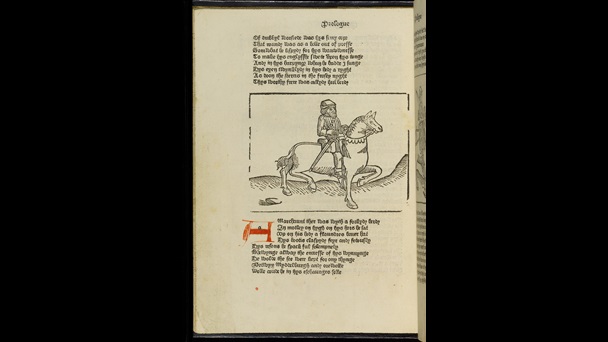 The portrait of the Merchant from Caxton’s second edition of The Canterbury Tales.

The generic hybridity of the Tale makes for a kind of medieval ‘mash-up’, a mixing of the ideal with the real, the abstract with the concrete. So while January might draw on sacramental ideals to explain his decision to marry, his treatment of May in the marital bed suggests baser motivation:

Damyan and May’s affair is likewise exposed as rooted in physical desire as Chaucer mixes the elevated discourse of courtly love with the sordid reality of the lovers’ thoughts and actions. Although initially suffering the ‘verray peyne’ (Book IV, l. 1775) of the conventional courtly lover, Damyan’s wooing falls far short of the tradition’s ideals. Whereas in ‘The Franklin’s Tale’ the squire Aurelius undertakes the task of removing the rocks from the Brittany coastline to win his lady, Damyan aspires to no more than penning a letter. And while the typical chivalric lover risks life and limb to gain the object of desire, Damyan takes no such chances, warning May on delivering his billet-doux: ‘Mercy! And that ye nat discovere me, / For I am deed if that this thyng be kyd’ (Book IV, ll. 1942–43). May is similarly far from the courtly ideal. Eschewing the conventional female role of resolute resistance, she rapidly determines to ‘doon [Damyan] ese’ (Book IV, l. 1981) – though not before casting the incriminating letter ‘in the pryvee’ (Book IV, l. 1954). Here, the rhetoric of romance merges with human excrement – succinctly capturing the Tale’s relentless drive to expose the ‘real’ behind the ‘ideal’. As might be anticipated, the consummation of the relationship is less than romantic and devoid of any foreplay: ‘And sodeynly anon this Damyan / Gan pullen up the smok, and in he throng’ (Book IV, ll. 2352–53).

Perhaps the most significant materialisation in the Tale, and one indicative of the teller’s own mercantile outlook, is January’s walled garden, his earthly paradise. Having created a place to indulge in ‘thynges whiche that were nat doon abedde’ (Book IV, l. 2051), January determines:

That he wol no wight suffren bere the keye
Save he hymself; for of the smale wyket
He baar alwey of silver a clyket (Book IV, ll. 2044–46)

Here, the satisfying rhyme of ‘wyket’ and ‘clyket’ seems to enact the action of a key in a lock – one replete with sexual connotations. At this point in the Tale, figurative language itself becomes prone to materialising forces. The metaphorical cliché that ‘love is blynd alday’ (Book IV, l. 1598) becomes realised in January’s physical blindness – a condition which according to medieval medical theory was often a natural consequence of sexual over-indulgence. And January’s initial conviction that a young wife can be moulded like ‘warm wex’ (Book IV, l. 1430) is literalised, with cutting irony, when May uses wax to make an impression of the key, thus granting the ‘naddre’ (Book IV, l. 1786) Damyan free access to the nuptial territory.

Far from impregnable, January’s pleasure garden, ‘walled al with stoon’ (Book IV, l. 2029), becomes the setting for his own cuckolding. Securely ensconced in its grounds, Damyan and May have sex in a pear tree: a common motif in medieval folklore and one found in numerous Continental analogues focussing on scheming wives and duped husbands. The polysemic symbol of the tree serves to connect the early and late stages of the Tale with powerful ironic force. January’s deluded vanity, captured in his premarital boast that his ‘lymes been as grene / As laurer (Book IV, l. 1465–66), grows even more ridiculous when a tree becomes the venue for his cuckolding – the stereotypical fate of the aged husband. We are also reminded of January’s conviction that marriage will ‘kepe hym fro the synnes sevene, / And eek from every branche of thilke tree’ (Book IV, ll. 1640–41) (vices were commonly represented in the figure of a tree). In addition, we recall January’s determination to ‘engendren hym an heir’ (Book IV, l. 1272), thereby securing the continuation of his genealogical tree. Instead, the aspiring father proves partly responsible for the rupture of his own patrilineal line when he encircles the pear tree with his arms, allowing May to climb up his back and into its branches, where the lusty Damyan is waiting. And, of course, the allegorical force of the Tale’s finale brings into sharp focus the biblical Tree of Good and Evil and the inevitable failure of January’s hubristic project to create a new Eden.

With his sight magically restored by Pluto, January witnesses his own cuckolding: ‘He swyved thee; I saugh it with myne yen’ (Book IV, l. 2378). Yet, instead of wreaking revenge on the perpetrators, he seems to turn a ‘blind eye’, readily accepting May’s sophistic excuse, provided by the sisterly Proserpina, that ‘[r]ight so a man that longe hath blynd ybe, / Ne may nat sodeynly so wel yse, / First whan his sighte is newe come ageyn’ (IV, 2401–03). The indeterminacy of the Tale’s ending ensures that the reader is left with plenty to think about. Is May’s pregnancy genuine? Why, does Damyan escape scot-free? Why in a Tale that seems to spring from the ‘[w]epyng and waylyng’ (IV, 1213) brought on by a shrewish wife, is the injured husband treated with every bit as much disdain as his erring wife? It is this open-endedness, and the Tale’s refusal to convey a fixed moral or message, that makes reading the ‘The Merchant’s Tale’ such an active, creative and ultimately rewarding process.