Love and chivalry in the Middle Ages

In the Middle Ages, the greatest knight was not simply the greatest warrior. He was also kind, courteous, generous and devoted to his lady: qualities that combined to produce perfect chivalry. Laura Ashe explores the ideal of chivalry through several works of the period.

At the end of Thomas Malory’s Morte Darthur (c. 1470), a vast work which chronicles the rise and fall of King Arthur and the Knights of the Round Table, we see the death of the greatest knight of them all, Sir Lancelot. His companion Sir Hector mourns for him, giving us a portrait of the perfect chivalric knight:

Lancelot was undefeated in battle – he had the greatest prowess of all. But that alone was not what made him the best knight in the world. He is praised for his ‘courtesy’ – not just the modern value of politeness, but a whole way of being, defined by his ease with others, his friendliness and generosity, his moderation in all things. The perfect knight is never angry without good cause, never irrational or out of control. Paradox is a part of this – Lancelot is the ‘kindest’ man who uses a sword – for the chivalric ideal is one of controlled and appropriate violence, necessary force in the defence of the realm and protection of the helpless. And finally, the greatest ingredient of all in Lancelot’s chivalry: his true and steadfast love of his lady, Queen Guinevere. 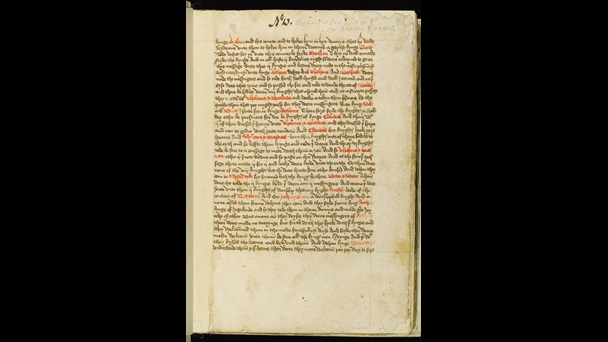 The chivalrous knight of the Middle Ages had begun as a simple warrior, an armed man who rode a horse into battle, fighting with spear and sword. But as the literature of medieval romance began to blossom in the 12th century, a sophisticated culture of courtly behaviour between men and women began to change the idealised image of a knight. Wace’s long poem Brut  (c. 1155) introduced the French-speaking nobility to the legendary King Arthur, whose court was the greatest of all. In the reigns of Kings Henry II (1154–89) and Richard the Lionheart (1189–99), themselves celebrated warriors who kept lavish courts, Marie de France’s Lays (12 short rhymed romances) offered their audience moving and magical stories of love won and lost by knights and ladies. Meanwhile the courtier cleric Andreas Capellanus wrote his satirical guide The Art of Honest Loving (c. 1185) for Marie de Champagne, daughter of Queen Eleanor of Aquitaine, in which he insisted that love was an essential aspect of aristocratic life. To be a great knight no longer meant only to be great in battle; it was necessary to be a perfect courtier too – a sportsman, musician, poet – and to play the sophisticated games of courtly love. 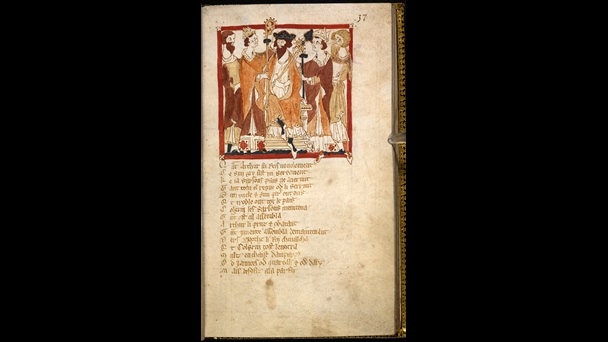 The coronation of Arthur from Wace’s Roman de Brut.

Malory’s ideal of chivalry has love at its heart: ‘thy quarrel must come of thy lady’, he says, ‘and such love I call virtuous love’. Each knight is to fight for the sake of his lady; with his victories he earns her love, and defends her honour. He is absolutely loyal to her and will follow her every command, whatever happens – whether she sends him on an impossible quest, banishes him from her company, or stands accused of some terrible crime, in desperate need of his help. Here, tragedy enters the picture. Lancelot’s love of Guinevere can never have a happy ending, for she is King Arthur’s queen. This is the epitome of ‘courtly love’ in literature: a commitment which binds the lovers until their deaths, but is never fulfilled in happy union. Lancelot’s helpless devotion to Guinevere is dangerous, and it ultimately destroys the court: gossips and slanderers tell the king of their affair, and Arthur is forced to take up arms against his greatest knight.

Doomed lovers: The role of death and tragedy

The tragic, idealised love of Lancelot and Guinevere cannot culminate in marriage: instead it ends in death. The lovers’ tragedy is a pattern invented in the Middle Ages and repeated in literature across time. Tristan and Isolde, Lancelot and Guinevere, Romeo and Juliet: each is bound by impossible love, the lovers doomed by circumstance. In Chaucer’s masterpiece Troilus & Criseyde (c. 1385), Prince Troilus writes a letter to his lost beloved Criseyde, who has betrayed him, begging her to return. In his poetry he calls her ‘she who may command me to life or death’. He swears he will die if he cannot look upon her beauty again, speaks of his weeping and his pain, and asks that if she loves him no more she should release him to die. Before this medieval ideal, classical heroes had fallen in love and had died. But never before had love been celebrated, as the goal of life and a worthy cause for which to die.

Why is love so closely linked with death in literature? The answer is simple. All loves end – either the lovers part or they die. So if love is to be perfect – if we are to know it was perfect and did not peter out into coldness or end in betrayal – then it must end with death. In his courtly dream-vision poem The Book of the Duchess (c. 1369), Chaucer makes the comparison with brilliant subtlety. His Dreamer narrator tells us that he has suffered from insomnia for eight years – there is ‘but one physician’ who could cure him, ‘but that is done’. He finally manages to fall asleep, and has a dream in which he enters a forest and meets a Black Knight who is lamenting the loss of his beautiful wife. The Dreamer persuades the Black Knight to recount the whole story of their courtship and love, and to describe his beloved’s beauty and grace and their happiness together. Only at the end of the dream does the Dreamer understand what the Black Knight is trying to tell him – that his lady is dead.

The Parliament of Fowls 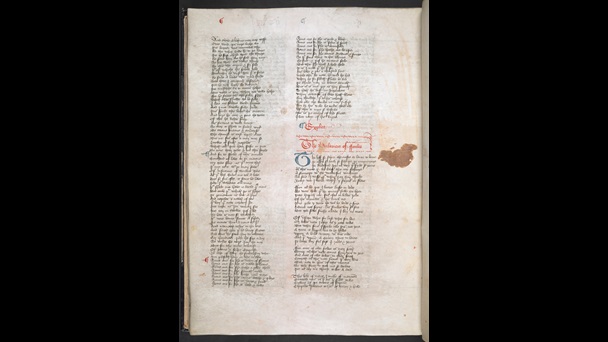 Geoffrey Chaucer’s playful exploration of the perils and pleasures of love in The Parliament of Fowls.

The Black Knight symbolises the Duke of Lancaster, John of Gaunt, uncle of King Richard II and one of the most powerful men in the land, whose first wife Blanche of Lancaster died in her early twenties and was widely mourned. The Book of the Duchess must have pleased the Duke, for Chaucer subsequently made a career in royal service. The poem ventriloquises a husband’s eulogy to Blanche’s beauty and virtues, his sweet tale of a perfect marriage and his heartfelt lament for a lost love. But Chaucer adds something more – a subtle comparison, for his courtly, aristocratic audience to debate. At the end of the poem the Black Knight must leave his lament and leave the forest to return to the court – just as the real John of Gaunt must marry again. His loss is tragic, as his love was perfect, but he must recover. And in comparison we have the figure of the Dreamer, whose suffering has lasted years: what is wrong with him? The answer comes in his confused questioning of the Black Knight, not understanding that Blanche is dead: ‘Will she not love you?’ he asks: ‘Or have you done something wrong, that she has left you?’ Grief distorts our perception of the world; we see our own pain everywhere, in others’ sorrow, and this is what has happened to the Dreamer. His beloved will not love him, or she has left him. For that loss, unlike the pure and idealised grief of the Black Knight, there is no remedy and there can be no recovery.

In all periods, readers have taken pleasure in reading about sorrow. Writing which celebrates grief assures us that we are not alone, and that our grief too may be remembered. In Marie de France’s lay Chevrefoil, the lover Tristan tells his beloved Isolde that ‘Neither I without you, nor you without me may live’, and they die together, remembered forever.

Learning how to love: Courtship and marriage

But medieval literature did not only turn to love in its tragic form. The conventions of courtly love were of course not truly intended to encourage lovers to embrace death: rather they prescribed social conduct between aristocratic men and women, the ‘old dance’, as Chaucer calls it, by which courtship could lead to marriage. For the nobility, almost all marriages were arranged by the couple’s families, often when the bride and groom were no more than children. But the Church insisted that the sacrament of marriage was only valid with the full, willing consent of both husband and wife. So we can see another cultural purpose to this literature, which is full of love at first sight, love as recognition of beauty and status which are always combined with virtue and loyalty. This literature shows its audience an aestheticised version of their economic reality, making beautiful the transactions of aristocratic marriage.

But there are only so many life lessons that can be drawn from this literature, which above all else venerates love in its most perfect form while leaving space for lovers to imagine this perfection in their own ways. In Marie de France’s lay Guigemar, a helpful lady-in-waiting comforts the hero who has been struck with love:

He lay awake all night, suffering and sighing; constantly he recalled in his heart her words and looks, her clear eyes and beautiful mouth, so that pain struck to his heart. … ‘My lord,’ she said, ‘you are in love: be careful you don’t hide it too much! You can love in such a way that your love will be well-lodged. Whoever wishes to love my lady must think most highly of her. This love will be admirable, if you are both loyal. You are handsome and she is beautiful.’

The two lovers are noble, beautiful, courtly and virtuous; he is a great knight, and she is a perfect lady. This is the ideal of medieval love which culminates in marriage. But the interesting thing about this romance with a happy ending is that it isn’t really about individual desire at all. The ideal is made to be adaptable, malleable: it can fit whoever is appropriate. When the hero is reunited with his lost lady he fails to recognise her, remarking ‘For women all look the same’. Courtly love is an ideal of devotion to the most beautiful, courtly lady. In every romance there will be a new knight who is the greatest of all, and he will love and be loved by a new lady who is the most beautiful.

The Lays and Fables of Marie de France 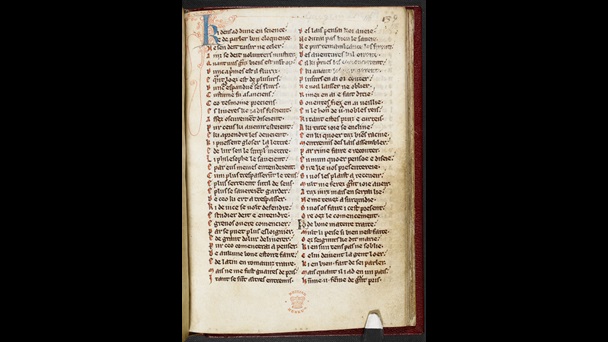 More articles on Heroes and heroines

More articles on Form and genre