Saints and sanctity in medieval England

Sarah Salih explores how medieval Europeans memorialised the lives of real and fictional Christian saints, transforming them into the superheroes and celebrities of the Middle Ages.

The saints were the superheroes and the celebrities of medieval European culture. Like superheroes, they were ordinary humans who had somehow become extraordinary, using their special powers to help their supporters and to protect the vulnerable. Like celebrities, they were larger than life figures who could be known virtually through multiple media. The lives and afterlives of the saints were written as stories (known as hagiographies), told in sermons and performed in plays; saints were depicted in narrative images showing the events of their lives and afterlives, in cult images that were the focus of prayer and pilgrimage, in mass-produced pilgrim badges that served as mementoes of a visit to a shrine where a cult image or the bodily relics of the saint were housed. In Britain the shrines and many artworks were destroyed during the Reformation, but texts and images of the saints survive in manuscripts; we have Middle English lives of almost 300 saints. Men and women, rich and poor, the educated and the illiterate – all participated in devotion to saints. 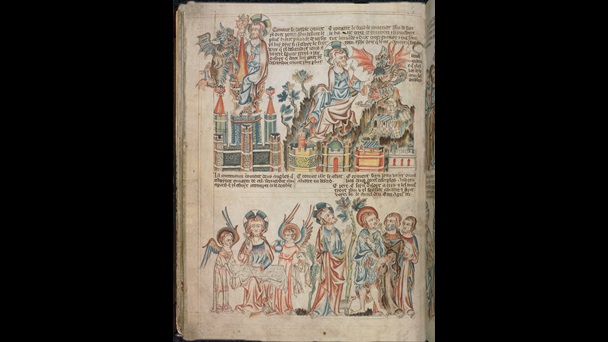 Illustrations of saints in the Holkham Bible Picture Book.

A cult of the dead: Martyred Christian saints

All religions distinguish and honour people who achieve special holiness or spiritual heroism. The Christian cult of saints was originally a cult of the dead, memorialising the martyrs of the first phase of Christianity who chose to die rather than relinquish their faith. Such confrontations certainly happened, and the New Testament recounts the executions of several Apostles and early Christian disciples: a page from the Huth Psalter (Add MS 38116, f. 12v) shows the deaths of the saints Peter, Andrew, Paul and Stephen.

Martyrs’ legends, often centring on long, drawn-out and explicit sequences of violence, were so popular that later eras invented dozens more essentially fictive early Christian saints, with memorial sites to match, each serving to protect and dignify a place. Particularly popular were the legends of virgin martyrs, tales of passionate, rebellious teenage girls who rejected their pagan families and suitors to assert their own sexual and religious choice to be virgins and brides of Christ. They are always martyred and welcomed to Heaven at the end of the story, after defying authority, resisting torture, performing miracles and converting sympathetic crowds. St Margaret of Antioch, one of the most widely venerated of the virgins, was visited in her prison cell by a demonic dragon, which swallowed her. By making the sign of the cross from within the beast, Margaret exploded the dragon and emerged triumphant.

Imitating the saints: The life of Margery Kempe

People were urged both to imitate the virtues of saints and to wonder at their miraculous achievements. Although the settings of virgin martyr legends were exotic and their events extreme and violent, these saints might still be imitated. In Lynn, Norfolk, in the 15th century, Margery Kempe, a daughter and wife of the urban elite and mother of 14 children, dictated the story of her life and her aspirations to sanctity in a work known as The Book of Margery Kempe. She identified with saints who had sinned, repented and been forgiven, such as the Church Father St Augustine of Hippo (Harley MS 2897, f. 157v), who converted from Manichaeism, and the biblical penitent Mary Magdalene (Add MS 50005, f. 136v).

The Book of Margery Kempe 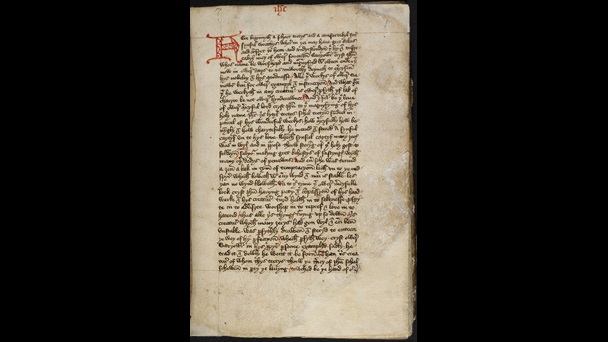 Margery Kempe, the 15th century mystic, identified with particular saints and virgin martyrs and used them as models for her own life.

But Kempe also cited the virgin martyrs as models. Margaret, her name-saint and the dedicatee of her parish church, appeared to her in visions. The Mayor of Leicester arrested and questioned Kempe, comparing her to St Katherine: ‘“Ah”, said the mayor, “St Katherine told what family she came from, and yet you are not like her, for you are a false strumpet, a false Lollard and a false deceiver of the people, and therefore I shall send you to prison”’.[1] Katherine of Alexandria was a virgin martyr who defeated 50 pagan philosophers in debate, thus aligning the mayor with the pagan tyrants who persecuted the saints (Yates Thompson MS 3, f. 281v). And Kempe’s eventual success in persuading her husband to agree to a vow of chastity was surely inspired by the Roman virgin martyr St Cecilia (Harley MS 2897, f. 440v), who converted her husband to chastity on their wedding night.

Saints in high places: St Edward the Confessor and St Edmund the Martyr

Once Christianity had become an established religion, it produced some saints who were exemplary role models. Saintly kings, queens, bishops, abbots and abbesses showed how privileged people should use their powers responsibly; their legends typically added miraculous elements to the historical life. St Edward the Confessor (1003–1066) was a pious king, who attracted stories of miracles testifying to his care for his people: in the image below we see him carrying a poor leper into a church where he is cured. Another Anglo-Saxon king, St Edmund the Martyr, who ruled East Anglia in the 9th century, failed as king but succeeded instead as a saint. Defeated and killed by invading Danes, he was remembered as a martyr, his cult promoted by the Danish kings who replaced him.

Solitude and demons: The life of Guthlac

Often, however, saints transgressed or withdrew from normal social structures. The first practitioners of withdrawal in the Christian tradition were the Desert Fathers and Mothers who lived in solitude or in small groups in the deserts of Egypt and the Middle East from the 3rd century. The most famous of these was St Anthony of Egypt: seeking to follow Christ’s example, Anthony gave his inheritance to the poor and left his family to live as a hermit in the desert, facing daily battles with demons that tormented and tempted him.

In Britain, fens and woods took the place of the desert. St Guthlac (673–714) turned away from the secular masculine lifestyle of a noble warrior to become first a monk, then a hermit in the fens of Crowland, Lincolnshire. There, like Anthony, he was tested and tortured by demons, who, seeking to discourage his spiritual aspirations, ‘lifted him up high in the air … so that before his eyes he saw all the actions of such men in monasteries … as were enjoying their life according to their appetite for worthless possessions and superfluous vanities’.[2] 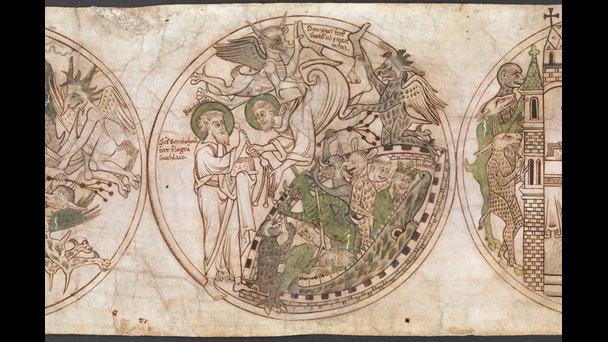 The Guthlac Roll is a long, thin strip f parchment which contains 18 ink ‘roundels’ – circular drawings – depicting the life of the Anglo-Saxon saint, Guthlac (674–715). It was made in the late 12th or early 13th century, probably at Crowland Abbey.

The demons need not be taken literally; though they are insistently physical in the images, they may have been intended and understood as allegorical figures of Guthlac’s psychological turmoil. But either way, battling with the demons in his solitude intensified Guthlac’s training as a spiritual athlete, enabling him to develop the charisma, authority and expertise that he used to serve the community, casting out a demon from an afflicted man and advising the exiled prince Æthelbald. 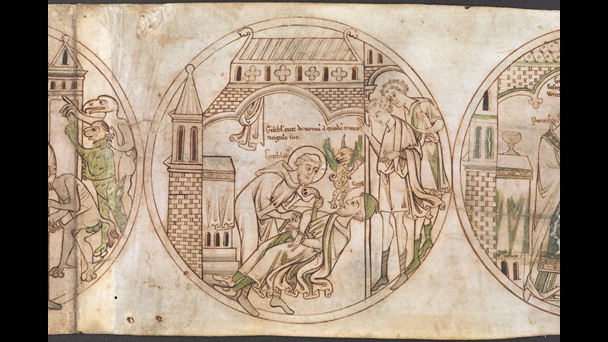 A demon being cast out of an afflicted man. 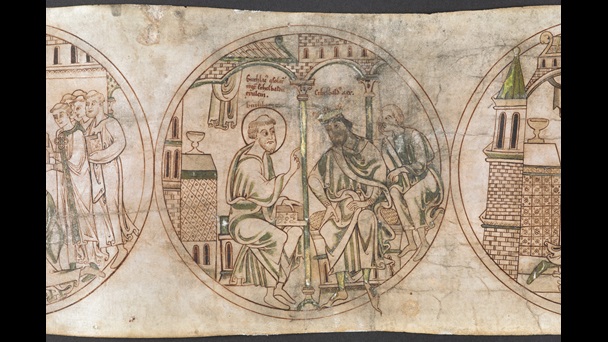 Guthlac’s career illustrates the saint’s function as, in Peter Brown’s term, a ‘hinge-man’, who is able to mediate between earth and Heaven. He shows, too, how a saint consecrates a place. Guthlac’s withdrawal opens up a portal to the supernatural world in the fens, and his hermitage became the site of Crowland Abbey. 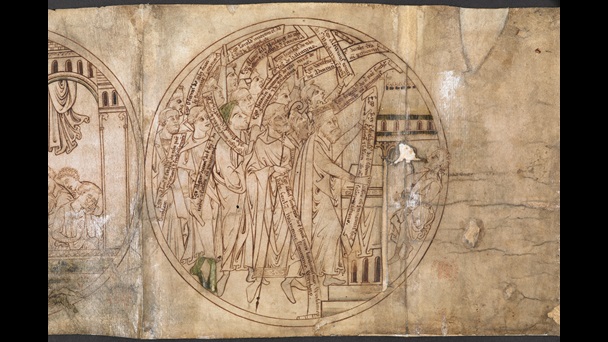 The benefactors at St Guthlac's shrine carrying scrolls detailing their donations to Crowland Abbey. The benefactors are led by King Æthelbald who approaches the altar, followed by Abbot Thurketel.

Some of the most popular and powerful saints never existed at all. St Christopher (Harley MS 2952, f. 163), patron saint of travellers, who carried the Christ Child, was said to be a giant and sometimes even to be one of the dog-headed men believed to inhabit remote parts of the world (Royal MS 20 A V, f. 73). A single glance at an image of the saint was believed to offer protection for the whole day, which is why he was often painted on the walls of churches. Other saints may have been Christianised pagan spirits or holy places; the Irish St Bridget, whose legend has some folkloric elements, is often believed to be one such composite figure.

A saint’s earthly life, however eventful, was only the first chapter. Saints were most powerful after death, as intercessors who could aid their devotees. In theory they could only petition God on the devotee’s behalf; in practice they were often perceived as autonomous powers. In 1433, John Lydgate, a monk of Bury St Edmunds, wrote a lengthy verse life of St Edmund to be presented to the young King Henry VI in a gorgeously illustrated presentation manuscript. Lydgate’s life told of the power Edmund wielded after his death. Edmund took revenge on the Danes he had failed to resist in his lifetime by his posthumous intervention to kill the invading King Sweyn. He continued to be a zealous and fiercely partisan protector of England, of the dignity of his own tomb and of the abbey at Bury St Edmunds that housed it. When a cunning thief tried to bite a jewel from the shrine while supposedly kissing it, Edmund ensured that he was stuck fast until he repented.

John Lydgate’s The Lives of Saints Edmund and Fremund Despite being thrashed in battle by the Vikings and being beheaded in the 9th century, St Edmund was a revered saint. This manuscript contains a poem about his life by the Benedictine monk and poet, John Lydgate (c. 1370–1450)

Margaret was believed to protect women in childbirth because of her own safe emergence from the belly of a dragon. Her aid was less tied to a specific locality than Edmund’s: women might need her anywhere, and so help was promised to any household that held a copy of her life. In an age when childbirth killed perhaps fiver per cent of adult women, it is no wonder that Margaret was popular. In 1441, Margaret Paston, newly married and pregnant with her first child, gave her husband a ring with an image of St Margaret to wear. She survived that birth and at least six more.

The Reformation and the saint-cults

In England the Reformation attacked many of the manifestations of saint-cults. The Dissolution of the Monasteries (1536–41) dismantled shrines and looted the riches they had collected over the centuries, with the shrine and cult of St Thomas Becket, the murdered archbishop of Canterbury whom reformers regarded as a rebel against royal authority, the target of particular hostility. Even private devotion to him was forbidden: the owner of one 15th-century prayer book dutifully cut out a prayer to Becket, but evidently could not bear to destroy the beautiful image as well (Harley MS 2985, ff. 29v–30). The reformers did not object to the veneration of holy people, but were hostile to practices such as pilgrimage and prayer to cult images and relics, and set about destroying the infrastructure that supported them. But the impulse to imagine and revere people who test the limits of humanity's endurance continued, and today the surviving manuscripts continue to allow us to witness the lives of these early saints.

More articles on Faith and religion