The elegies of the Exeter Book

The poems in the Exeter Book known as the 'Old English elegies' focus on loss, separation and the transience of earthly things. Mike Bintley explores these poems, which include The Wanderer and The Wife's Lament, and highlights the parallels between the elegies and the riddles in the Exeter Book. 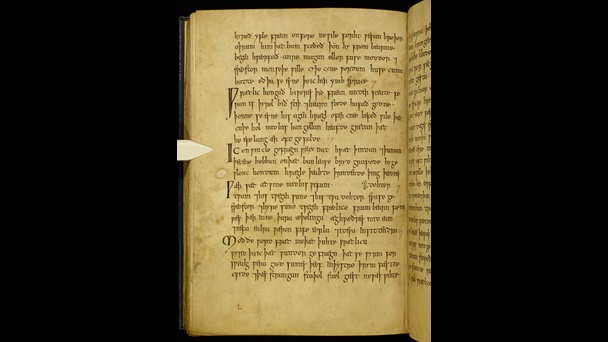 Much Old English poetry, and indeed medieval poetry, is about the mutability and decay of all things. For the peoples of early medieval England, whose culture was in some cases literally overshadowed by the material remains of Roman Britain (43 CE–c. 410), the theme of sic transit gloria mundi (‘thus passes the glory of the world’) was immediately present in their own landscape. In this respect, the elegies epitomise a theme found throughout medieval literature: that of the transience of mundane and earthly matters, and the permanence of the heavenly and the divine.

The works commonly referred to as the ‘Old English elegies’ are contained within one partially damaged manuscript, the Exeter Book. The contents of this codex (manuscript book) are various, and in addition to the elegies it includes a vast wealth of riddles ranging from the bawdy to the sublime, episodes from the lives of Christ and the saints Guthlac and Juliana, an allegorical account of the life of the phoenix and wisdom poetry. It is important to recognise that the generic lines dividing these ‘elegies’ from the other works that accompany them in the manuscript have been drawn by modern editors, largely on the grounds that they each, in their own way, fit our contemporary sense of what an elegy is – a work that laments and memorialises things that have been lost. Such generic divisions, which are in no way marked in the manuscript, may have been far less clear to medieval authors and their readers, whose understanding of form and genre was markedly different from our own.

The Ruin, The Wanderer and The Seafarer: The loss and destruction of earthly things

Appropriately, one of the Exeter Book’s most badly damaged works is The Ruin, in which an omniscient eye passes over the wreckage of a stone-built town, described as the ‘work of giants’. Left over from the Roman period, such towns were a ubiquitous presence throughout much of the British landscape. The speaker describes the scene:

Bright were the city buildings, many bath-houses, lofty with many rooftops, and the great clamour of the warriors – many mead-halls filled with the joys of men, until mighty fate changed all that.

Fate, or wyrd as it was known in Old English, is responsible for the destruction of earthly things elsewhere in the elegies. The Wanderer sees a lordless and homeless exile making his way through a wintry landscape of frozen seas and windblown ruined buildings, attempting to reconcile the pain of earthly loss with the promise of heavenly bliss. The poem’s climax sees the wanderer reflect on all the things that have been lost; the bright cup, the horse, the rider and the bright hall where drinking and the giving of treasure took place. ‘How that time passed away’, he recalls. ‘It went down under the shadow of night as though it had never been’. Confronting the loss of transitory things, however, is what helps the wanderer to move past this, as he reflects on what is lent to us in this life, and what awaits him in the next.

Similar thoughts preoccupy the voice of The Seafarer, a figure who like the wanderer finds himself on the fringes of human society and troubled by the relationship between the body and the soul. Like the wanderer, the seafarer endures a difficult life of solitude, similarly plagued by harsh weather; he contrasts his journeys over the waves with the pleasures of those who remain on dry land, enjoying human pleasures:

Therefore he who has experienced the joy of life in the towns, proud, drunk with wine, and safe from terrible journeys, can little understand how I have often endured, weary upon the oceans.

And yet he is drawn to the waves – compelled to travel the oceans despite their obvious hardships, and to listen to the song of the seabirds rather than the music of human halls. Like the wanderer, the seafarer concludes by reflecting upon the impermanence of all that is earthly. The only stability to be found is in the next life, once he has returned to his heavenly ‘home’.

The Wife’s Lament and Wulf and Eadwacer: Sorrow, separation and women’s voices

Women’s voices are less prominent in Old English poetry, though notable exceptions include the Danish queen Wealtheow in Beowulf, St Helen in Elene (who reveals the whereabouts of the True Cross) and the martyr St Juliana (in Juliana), who demonstrates formidable bravery in the face of Satan himself. Two of the elegies generally thought to be voiced by women are The Wife’s Lament and Wulf and Eadwacer. The riddling nature of these texts, which may or may not refer to lost narratives, continues to inspire debate.

The Wife’s Lament, the longer of the two, is voiced by an anonymous female speaker, who begins by announcing her intention to tell us about the sorrows of her past and present. Separated from her lord and her beloved in unclear circumstances involving violence and intrigue, she tells us that she has been forced to live in a woodland grove in an earthen cave, beneath an oak tree. It is here that she is doomed to spend the ‘summer-long days’, lamenting her ‘journeys of exile’ and the absence of her beloved. A range of solutions have been offered to explain the reasons why the speaker is confined to this place, and whether she is a prisoner, or – as some have suggested – an unquiet spirit. These two interpretations alone cast a different light on the poem’s final lines, in which the woman seemingly speaks of the current condition of her beloved, who is outcast in a distant land, living in a ‘dreary hall’ beside the sea, suffering great personal hardship. ‘Woe betide him who must always yearn for his beloved’, she says. Is this a recognition of his mourning for her – or a curse she wishes upon him?

Wulf and Eadwacer consists of no more than 19 lines. Like The Wife’s Lament, its focus is on separation, loss and longing, and the nature of events in the poem is equally difficult to determine with any certainty. The speaker begins innocuously enough, declaring ‘it is to my people as though they had been given a gift’, but she continues by saying ‘they will desire to capture him if he comes in a warband’. Who ‘he’ is, or why he should come in a warband, is at first unexplained, and she tells us nothing about the reasons why her people feel that they have been given a gift. But ‘it is different for the two of us’, she says, hinting at a relationship marred by suffering and strife. ‘He’ is named as Wulf, who is on one island, whilst she is on another, which is set amongst the fens and inhabited by bloodthirsty men. Things soon become even more complicated: although she tells us that she has grieved for Wulf, she also tells us that she has experienced both joy and suffering when taken in the arms of a man ‘brave in battle’, who seems to be someone other than Wulf. This other man may be the Eadwacer who is addressed in the final lines, when she tells him that a wolf (or Wulf?) will bear their ‘wretched whelp’ into the forest.

The Husband’s Message: Crossovers between the Exeter Book elegies and riddles

A poem which has often been considered in the same breath as The Wife’s Lament, perhaps as an answer to the questions it poses, is The Husband’s Message. This work, which is similarly concerned with feud, separation and longing, seems to be voiced by a piece of wood on which a message has been carved from a man to a woman, perhaps in runes. Its purpose is to bring the two back together. Questions have been posed, however, about the relationship between this work and a riddle which precedes it in Exeter Book Riddle 60. Some have suggested that the subject of the riddle is some kind of tree or plant that has been turned into a material to allow communication between humans. Is its speaker the same one found in The Husband’s Message?

Amongst many other things, this raises questions about the generic boundaries of ‘elegy’ that group these poems together. Speaking with the voices of a range of non-human animals and objects, many of the 95 Exeter Book riddles describe circumstances that parallel the suffering of human speakers in the elegies. The shield of Riddle 5 is continually subject to the onslaught of blades in warfare; the leather of Riddle 12 used to bind slaves was once an ox, as was the vellum used to make a religious book in Riddle 26, and perhaps the creature yoked and pricked in Riddle 72; the plough of Riddle 21 was once a tree of the forest; the constituent parts of what may be a flail in Riddle 52 are described as ‘violent captives’ and ‘prisoners’ ‘tightly bound’. Riddles and elegies share more in common than we might first assume, then, in so far as they may share ideas and vocabulary that offer deeper insight into early medieval thought about the world and all the things in it, both human and non-human, that often occupied the same plane of experience.

What is most striking, perhaps, is that the riddles and the elegies draw on a shared symbolic vocabulary concerning the paradoxes and bafflements of grief, suffering and reconciliation. At the heart of this is how one comes to terms with the transformations of life and the inevitable passing of all things, but so too is the frustration of being human and needing to find this resolution. This may be why the riddles are some of the most popular Old English poems today; they articulate emotional states that are entirely familiar, even if their causes may be different. As the author of Resignation puts it, in closing:

A tree may grow, awaiting its fate, and put forth its branches. But I, because of slander, may not love in my heart any man, any warrior in my homeland... Yet it is best, since a man may not change his fate, that he should therefore endure it well.

More articles on Faith and religion

More articles on Form and genre