During the 18th and early-19th centuries, country houses in Britain emerged as significant tourist attractions. There was already a long tradition of expecting country houses to offer travellers hospitality, and by the middle of the 18th century, part of being a polite landowner was allowing tourists to visit your house and grounds. In theory, this standard applied to all houses, but only a handful, such as Wilton House (Wiltshire), were sites which routinely attracted hundreds of visitors. At houses like these, the huge increase in visitor numbers led to formal opening hours, standardized tours (typically given by housekeepers), inns which catered to tourists and the publication of guidebooks. The guidebooks published during this period are the best records of what an ideal visit to a house was intended to be like: they indicate what you were expected to appreciate and to ignore. Guidebooks were typically published only after a house had established itself as a popular site, and so in effect, they codified visiting practices that were already in place. 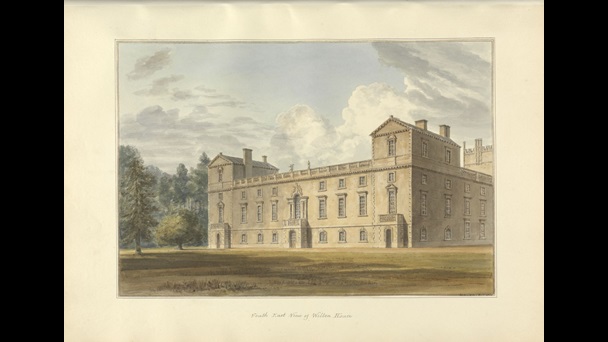 One of three watercolour studies of Wilton House, produced by John Buckler and his son John Chessell Buckler for Castellated and Domestic Architecture of England and Wales from the 11th Century to the 19th.

Guidebooks’ content was typically organized to maximize convenience for visitors as they toured a property. This is a set of schematic plans which was bound near the beginning of one of the Burghley House (Lincolnshire) guidebooks, and these plans are numbered according to the order tourists typically viewed rooms in – beginning with the great hall, room 1, then the saloon, room 2, and so on – they are linked to a key, but the numbering is also linked to the subheadings in the text itself. Not all guidebooks were illustrated in this way, but a room-by-room organization was common, presumably because this made it easier to carry, read and view at the same time.

A Guide to Burghley House, Northamptonshire 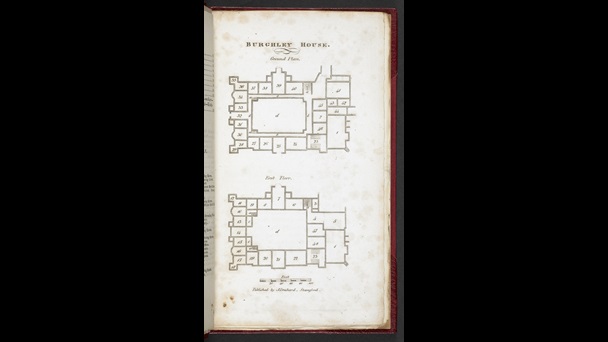 A portable guide by the British topographer Thomas Blore (1754-1818) for visitors to Burghley House, one of England's finest country estates.

Guidebooks had tremendous potential as interpretive tools in that they could make a site more accessible and legible to its visitors. One of the main reasons people published guidebooks was to catalogue the art collections: this was not only a gracious gesture towards tourists, it was a clear signal that visitors were expected to carefully examine the individual works on display – many guidebooks, such as those describing Wilton, include entries about each painting and/or sculpture, directing readers to appreciate specific qualities. Outside the house, guidebooks were no less instructive: the guidebook to Hawkstone (Shropshire), for example, a house famous for its garden (and well-known for the comfort of its inn), provided information about the various views and spaces tourists would encounter as they toured the site and indicated what was to be admired at each stage.

As objects, guidebooks were designed to be functional, and book reviewers were very invested in how they were convenient for tourists. To that end, guidebooks are usually small, octavo volumes; and, while many of them are quite long, they are usually bound in paper covers, making them lightweight and inexpensive. Many, in fact, might reasonably be labelled pamphlets rather than books. Yet at the same time, guidebooks could function as mementos for tourists as well as practical aides. 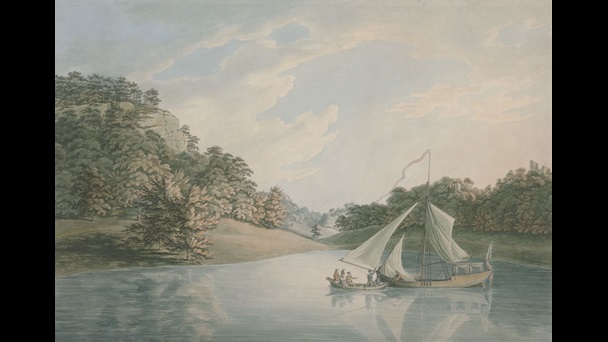 Hawkstone Park, depicted here by John Emes, is a landscaped parkland and pleasure gardens formerly belonging to the Hawkstone Hall estate in Shropshire.

A guidebook’s appeal as a souvenir could be heightened by the addition of an illustrated frontispiece. The most common type of image was a view of the house itself, surrounded by the landscaped grounds, but it also depended on the particular attractions of the property. A number of the guides to Wilton, for example, illustrated one of the house’s sculptures on the frontispiece; that of Duncombe Park (North Yorkshire) displayed the ruins of Rievaulx Abbey, a site visible from the estate’s terraces.

The most elaborate guidebooks included series of illustrations. Some editions of the guide to Blenheim Palace (Oxfordshire), for example, incorporated a fold-out map of the gardens (often with hand-coloured details) and a set of views of the house, one each from the north, south, east and west. 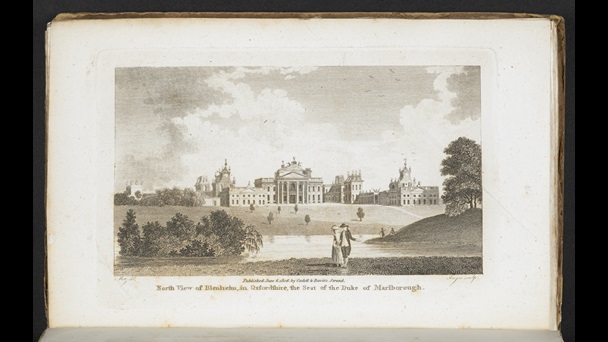 This plate illustrated A New Description of Blenheim: a guide to Blenheim Palace by William Fordyce Mavor first published in 1789.

Considered as a group, these guidebooks, many of which were available in London bookstores as well as near the houses themselves, might be said to be appealing to readers as texts which might be read for their own sake, after the visit to the house was over. In doing so, they were in effect claiming a greater relevance for their content, and for the cultural significance of information about country houses, their art collections and their gardens.