Joshua Mardell examines the architectural and topographical works of the Buckler family.

The British Library holds an extensive collection of drawings produced by the Buckler family of antiquarian artists and architects. The archive is catalogued as the ‘Buckler collection of architectural and topographical drawings: 1757–1897’. The lines between what is architectural and what is topographical are blurred: for example how do the images below differ? Do we define John Buckler’s drawing as architectural as he records the library of Browsholme Hall which he himself designed, while classifying John Chessell Buckler’s architectural detail of a church in Kedleston as topographical or antiquarian in intent? When the senior members of the family first established themselves as architects and artists, it ‘was a period when the connection between the topographical artist and the architect was close, with the one slipping easily into the role of the other’.[1] 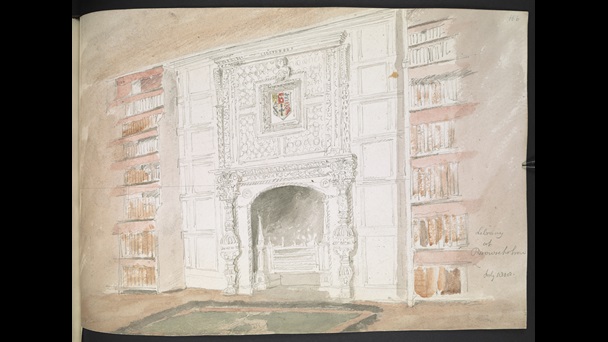 Architectural, topographical, or antiquarian? A watercolour of Browsholme Hall library (1808) by John Buckler and John Chessell Buckler’s view of All Saints Church in Kedleston, Derbyshire (1812).

The Bucklers were key propagandists of, and actors in, the 19th-century Gothic Revival. Motivated by their passion for the medieval, the family assiduously archived a century of antiquarian inspiration, collecting drawings so that the family’s archive at the British Library encapsulates a reading of the 19th century as the century for history. Indeed in working years the Bucklers, over three generations, neatly bracketed two fins-de-siècle. The dynasty’s paterfamilias John Buckler (1770–1851) exhibited his first architectural work at the Royal Academy in 1796. He relayed his antiquarian passions to his sons John Chessell Buckler (1793–1894) and George Buckler (1811–1886). The dynasty ceased when third-generation Charles Alban Buckler (1824–1905) retired in 1901.

Until the spring of 1854, the Bucklers’ antiquarian collection – that had another half-a-century still to grow – was held at the home of John Chessell at 33 High Street, Oxford. In May that year, John Chessell and Charles Alban made a Deed of Assignment to Magdalen College, Oxford, for the handover, on their death, of their collection of drawings and books in trust to the College. By May 1862, however, the Bucklers countermanded their agreement with Magdalen, bequeathing their collection to the British Museum instead.[2]  Perhaps the Bucklers came to believe that the significance of their antiquarian efforts were not local but national. By 1901, most of the collection was in the hands of the British Museum, and in that year, on Charles Alban’s retirement, a Parliamentary Return was made by the Museum that:

completes a transaction which secures for the Department [of Manuscripts] an unequalled series of sketches of buildings and architectural details from all parts of England and Wales made by three generations of the Buckler family (especially by John Chessell Buckler) during the past century. As a record of the state of the ancient buildings of this country at the period named, these drawings, which fill nearly 100 (large folio) volumes, are of especial value to the national collection.[3]

The veteran architectural historian John Harris described the family as ‘peripatetic in their artistic thirst’; so thirsty indeed that Adam Menuge, one of the Bucklers’ few chroniclers, could speak of the ‘forbidding bulk’ of their corpus.[4] Cumulatively the family produced tens of thousands of prints and drawings, spread today over 144 volumes or boxes in which, as Menuge discovered, ‘all three Bucklers are represented; the majority of the drawings are unsigned; few are dated; and the titles where they exist are perfunctory’.[5]  The result is a magnum mare, or ‘great sea’, of archival objects, hitherto the family’s main legacy.[6]

Charles Alban described the collection in 1881 for the architectural magazine, The Builder:

In the preface to Mr. J. H. Parker’s “Domestic Architecture” published in 1853, mention is made of the Buckler collection of drawings and sketches, “the result of the labours of three generations”. Since that date the collection, then unrivalled, has been greatly augmented and it abounds in measured details from ancient examples of ecclesiastical, military and domestic architecture.[7]

The Bucklers were a self-consciously family-oriented enterprise. Indeed, George Buckler’s rather Utopian claim that his family ‘worked together in perfect harmony without any confusion of labour’ stands up.[8]

It was through John Snr.’s Cathedral series begun in 1799 and completed in 1814, seminal along with similar efforts by John Britton, Browne Willis and James Sargant Storer, that the dynasty first attained a national reputation. The Cathedral prints were self-published from Buckler’s Bermondsey home and sold by various regional agents, principally at book shops.[9] The prints were indebted to a stream of subscribers UK-wide, and to the sponsorship of patrons, principally Deans and Bishops, whose patronage was awarded in the form of a printed dedication at the base of the plate-mark, along with the patron’s coat of arms. John Chessell Buckler established his own reputation on the back of his father’s through the re-appropriation of his father’s drawings into a new context, for a new market, e.g. the need for description, reduced prints, and wider, cheaper circulation. He brought together his own reproductions of his father’s prints into a 1822 volume titled Views of the Cathedral Churches.[10]

North-West View of the Cathedral Church at Wells 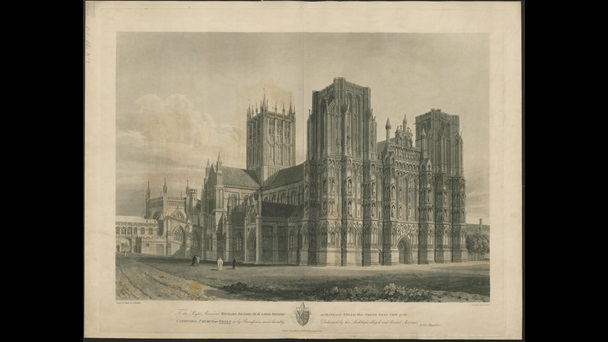 A print of Wells Cathedral etched and aquatinted by Frederick Christian Lewis after an original drawing by John Buckler.

The aquatint northwest view of Wells Cathedral (1806) is typical of the senior Buckler’s Piranesian scaling in his Cathedral series. Staffage, or human figures, are seemingly dwarfed by the building’s monumentality. A further case in point is a view by John Chessell of Costessey Hall, Norfolk.[11] Writing in the Architectural Magazine, the commentator John Claudius Loudon wrote of the latter how: ‘It [the building] fills, in fact, too much of the paper, and has neither enough of background nor of foreground’.[12] That is, the building has its own architectural autonomy, almost devoid of context. Often the only accession to landscape context is a strip of foliage and architectural debris in the immediate foreground, a common Buckler motif in their prints, used as a scaling and framing device. As Ann Payne observed, across the Buckler collection, ‘the emphasis is decidedly architectural’.[13]

Complicating the useability of the archive, scholars working with the collection have emphasised the similarity in representational styles of the Bucklers, such as Maurice Wilmore Barley, who argued that ‘Research would be required to separate accurately the work of the three’.[14] Indeed, typifying the strength of the Bucklers’ continuity, Barley confused or conflated John Snr. with John Chessell. Another example, typical of several accounts, is the Burlington Fine Arts Club who in an 1871 exhibition of deceased artists, exhibited the ‘Ruins of Fountains Abbey’, by John Chessell Buckler – far from deceased – with his father's dates and biography in their catalogue.[15] Landwade Hall, Cambridgeshire is one notable example of a subject represented by all three generations.[16] 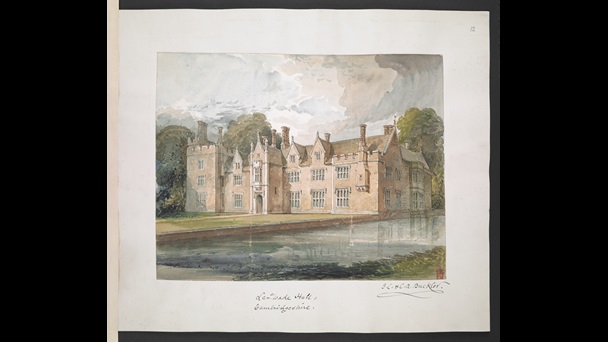 Architectural drawings by the Bucklers 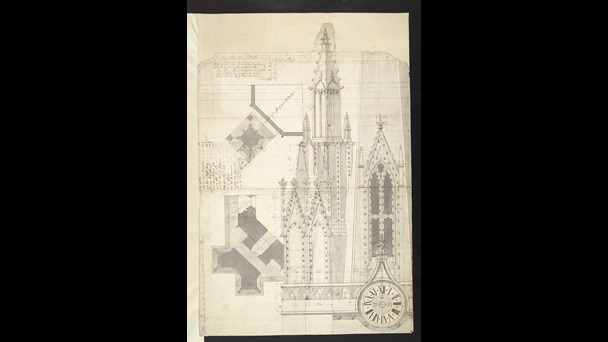 A group of architectural drawings by John Buckler, John Chessell Buckler and his son Charles Alban Buckler, showing John Chessell’s restoration of the University Church of St Mary the Virgin, Oxford (1848–52) and a series of drawings of chimneys.

The dynasty opened at the time of an emerging obsession with architectural taxonomies and the delineation of medieval buildings into types. It closed as this obsession became obsolete, thus encapsulating the 19th century also as the century for typification.[17] Ten volumes in the archive are organised by types, or, as architect Rem Koolhaas put it at the 2014 Venice Biennale, ‘Fundamentals: the inevitable elements of all architecture used by any architect, anywhere, anytime (the door, the floor, the ceiling etc.)’.[18] These volumes of sketches are demonstrative of the Bucklers’ nurturing of the specialised antiquarian knowledge that informed their intellectual consciousness and architectural production, in addition to establishing their voice, position and reputation. The portfolios likely still respect the order according to the Bucklers. Dates, authorship, and geographies are all mixed, in subservience to typological classifications. The portfolio speaks clearly for a family business and for the ambidexterity of the Bucklers’ practices as antiquarian artists and architects. 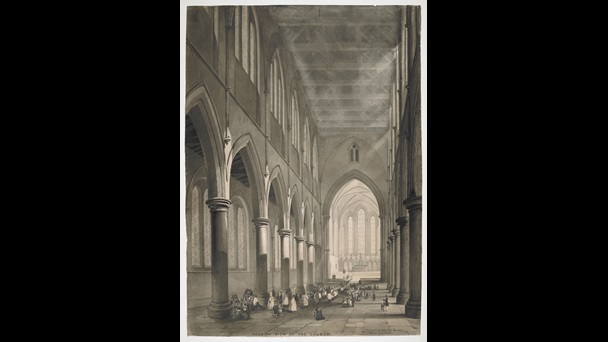 An architectural drawing by John Chessell Buckler, with figures by his nephew Thomas Hollis, of the interior of St George’s Church (now Cathedral), in which a tab can be lifted to reveal the timber structure above.

The sheer scale of the archive may account for the fact that the Bucklers are best known as architectural draftsmen. They can however, be placed in a wider artistic context, as is evidenced by the senior Bucklers’ professions, listed by late-20th-century German lexicographers of art:

With diverse practices grouped under a homogeneous classification, we must remember that discrete objects in the collection change their significations through their respective contexts, i.e. motivated by different patrons, audiences and markets. 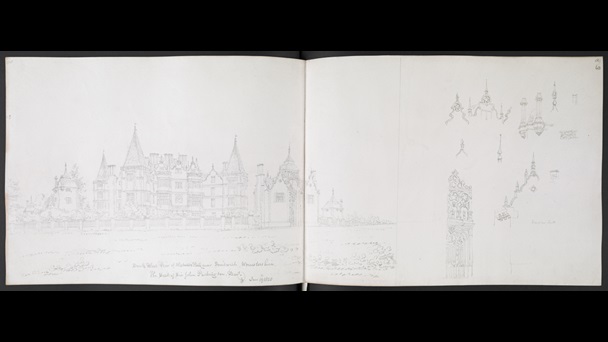 John Buckler‘s highly finished pencil drawing of Westwood Park was intended to be published as part of a collection of views of the Droitwich area.

Design drawings are only minimally represented in the collection, from John Chessell and Charles Alban’s designs for a controversial restoration of the Church of St Mary the Virgin Oxford (1848-52), to John Chessell and George Buckler’s fully developed elevation drawings for a new Roman Catholic Cathedral in Southwark (1839). John Buckler snr., despite having been an architect of high-standing early in his career, soon ‘decided his bias for antiquarian pursuits… in preference to the study and practice of architectural design.[20] It was his son John Chessell who could make the worthiest claim to having been a key actor in the 19th century defense of medieval buildings.[21] John Chessell and Charles Alban, often in partnership, were the most active as authors of architectural publications, such as their History of the Abbey Church of St Alban (1847).[22] Charles Alban had particular specialisms in heraldry, and as such was appointed, by Queen Victoria, Surrey Herald Extraordinary at the College of Arms.[23] All these practices are represented in the family archive, including drawings designed for publication such as John Buckler’s view of Westwood Park, above. 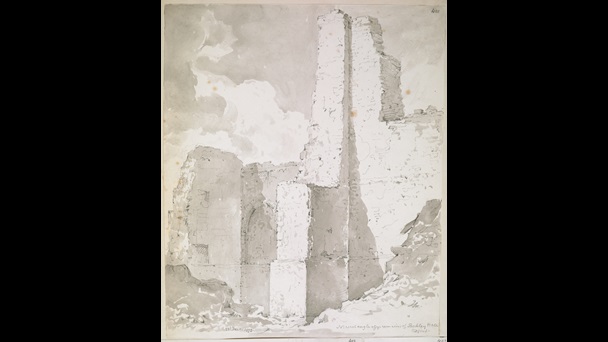 This watercolour of the partially demolished walls of St. Thomas Hall was one of 70 drawings John Chessel Buckler executed as he recorded the archaeology of a group of medieval buildings on Oxford‘s High Street in 1872.

The motivation of the Buckler archive was to produce knowledge of medieval buildings both to serve a revival of architecture on a Gothic model, and to serve a related concern for the preservation of medieval buildings, as with John Chessell’s drawings of the remains of Oxford’s High Street. In so-doing, their collection demonstrates the interdependency of architectural and topographical media in the 19th century. Dynastic self-consciousness (and dynastic empowerment) on the part of the Bucklers was critical to the archive’s formulation, development and arrangement. Thus, the collection is not only fascinating for its objects, but as much what it says about a close-minded family of talented architects and artists, motivated by the same antiquarian passions across the long 19th century. The Buckler collection plays remarkable witness to their resultant productivity.

[6] Though by far the largest, the British Library’s is one part of a UK-wide, and international collection of the Bucklers’ prints and drawings.

[11] The rebuilding of Costessey Hall was undertaken by John Chessell Buckler onwards from 1825 for the seat of the Stafford-Jerninghams. Charles Alban Buckler joined his father on later phases, lasting until the mid-1870s.  A representation at the Yale Center for British Art has two 1831 representations of Costessey Hall that match this description (B1975.2.364).

[15] The Burlington Fine Arts Club, Exhibition of Drawings in Water-Colours by artists Born Anterior to 1800 and Now Deceased, London: Metchim and Son (1871), p. 23.

[16] Landwade Hall was built in 1847 by John Chessell Buckler for Lt. Alexander Cotton and demolished in 1854.

[17] From Thomas Rickman’s seminal nomenclatural developments in An Attempt to Discriminate the Styles of English Architecture (1817) through to John Ruskin’s The Stones of Venice (1853).

[21] Many of John Chessell Buckler’s polemical writings on buildings are grouped in a folio titled ‘Printed Tracts on Architecture’ at Add MS 27773.