An abortive set of prints of European ports drawn by Alexandre Jean Noël is given close examination by Mercedes Ceron.

Scattered among the views in George III’s Topographical Collection there are three prints signed by François Allix (c. 1753–1794) that once belonged to the same, failed series of Spanish and Portuguese ports. These views of Cádiz, Cartagena and Lisbon after drawings by Alexandre Jean Noël (1752–1834) were published between 1788 and 1790. They are not dated but, according to two advertisements in the Journal de Paris, the views of Cádiz and Lisbon appeared on the 20 November 1788, while the view of Cartagena was not published until June 1790.

A view of the Port of Lisbon 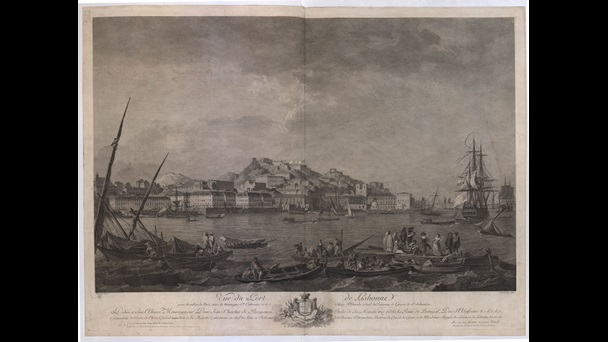 Noël's view of Lisbon is full of anecdotal details such as sailors at work and at rest.

According to the title, it was taken ‘from the centre of the harbour, between Mount St. Catherine and the Village of Almada, on board Warship St. Sebastian’. As in all of Noël’s views, the foreground abounds in anecdotal and picturesque details: sailors are at work on a small ship next to a boat on board of which some men in Oriental costume smoke. Another group of sailors drink and eat grapes, passengers are ferried beyond and a couple dances on a raft surrounded by men playing guitars and spectators including a child. On a smaller boat tied up to the raft, a man dozes, possibly drunk, while his cowled and tonsured companion keeps drinking from a bowl. The Praça do Comércio with the equestrian statue of King José I can be seen in the background at right. Buildings in ruins and two cranes appear as reminders of the destruction caused by the 1755 earthquake, from which the city had not completely recovered.

A view of the Port of Cádiz

A mixture of locals including dancers and smokers bring this scene to life.

Dancers, drinkers and smokers in Oriental robes also feature in the foreground of Noël’s view of Cádiz seen ‘from the side of the mole, near the road to Puntales’ (Maps K.Top.72.14.). A woman, two men and a little girl stand on a rock looking at the bay, while another man looks through a telescope at right. A draughtsman sits on a nearby rock, busily sketching while an older man with a dog and an assistant holding a portfolio stand looking over his shoulder. What they all see is explained in the title of the print, which refers to ‘the departure of the joint squads of Spain and France, under the orders of Don Louis de Cordova, in 1782’. The warships in the background were about to take part in the Siege of Gibraltar during the American War of Independence. The whitewashed buildings of Cádiz with their towers and spires glimmer in the sun beyond the fortifications, the Customs House and the House of the Four Towers.

A view of the Port of Cartagena 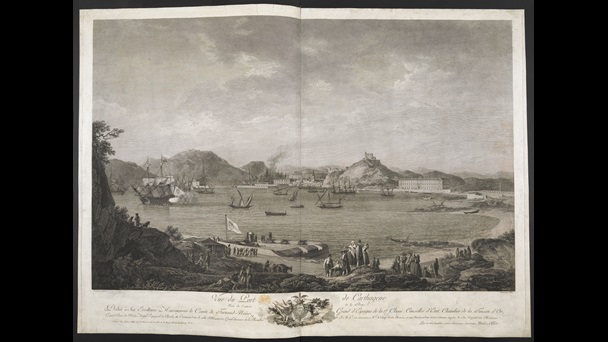 The defensive role of the port is evident in this view of Cartagena.

In the view of Cartagena from the West side of the bay (Maps K.Top.73.56.), the usual figures in traditional costume loiter in the foreground next to a group of men playing cards. The major military and defensive role of the port of Cartagena in the Mediterranean is suggested by the cannons, soldiers and sentinel house seen beyond at left, while the new buildings with which its defences were improved throughout the 18th century are depicted in the background.

Both the view of Cádiz and the view of Cartagena, which seems the last published in the series, are dedicated to Carlos José Gutiérrez de los Ríos y Rohan-Chabot, Count of Fernán Núñez and Spanish ambassador to Lisbon (1778–1785) and to Paris (1785–1791). These circumstances, and the fact that the Count had been born in Cartagena, could explain Noël’s choice of locations. They also suggest that Fernán Núñez, who was Commander in Chief of the Spanish navy for the Atlantic, might deserve to be credited with a more pivotal role in the conception of the Collection of Ports. The Francophile Count, whose mother was French, had contacts in the Parisian artistic milieu and he had in the past commissioned works from French and Spanish artists, including Jean Baptiste Pillement and Francisco de Goya.[1]

Information on the intended ‘Collection des Ports d’Espagne et de Portugal’ appeared in the advertisement for the first two views published in the Journal de Paris on 18 November 1788. According to this source, the series would be a continuation of ‘the collection of views of Ports of France, engraved by M.M. Cochin & le Bas, after the paintings made for the King by M. Vernet’ covering the whole of Europe.[2] The project had the blessing of Claude-Joseph Vernet (1714–1789), who had already recommended his former pupil Noël to accompany Jean Chappe d’Auteroche’s scientific expedition to Mexico and Baja California. Moreover, Noël’s works were to be etched and engraved by François Allix, who studied under Jacques-Philippe Le Bas (1707–1783).

The advertisement explained that Noël had travelled in Spain and Portugal between 1780 and 1782. He probably included himself in the views of Cádiz and Cartagena as the draughtsman accompanied by a dog and by an assistant holding a portfolio in order to emphasise the accuracy of his works drawn on the spot. The Ports would appeal to both taste and intellect by means of a ‘pleasing air of truthfulness’ guaranteed by the painter’s scientific credentials and by his choice of ‘beautiful’ and ‘picturesque’ scenery.[3]

Why was the Collection of Spanish and Portuguese ports discontinued? Although the advertisement for the last print states that it was ‘the second issue of the third pair in the Collection’ (‘2e livraison de la 3e suite de la Collection’), the view of Cartagena is listed in the Annonces de Bibliographie Moderne simply as the third plate in the collection.[4] No other views from the series have been found so far. A likely reason for the failure of Noël’s enterprise might have been its timing. The Count of Fernán Núñez left his post as Spanish ambassador in Paris in 1791 as a consequence of the French Revolution, Allix died during the Terror in 1794 and Noël himself seems to have gone into exile in Portugal in about 1791.[5] Vernet’s images of prosperity, security, trade and industry could hardly be emulated by Noël in the wake of the French Revolutionary Wars. In this context, even the picturesque idleness in the foregrounds of the only three views he published could have seemed, despite its charm, slightly incongruous.

[2] ‘What could be more interesting in this genre than a whole series of views of the most famous ports, renown for either their location or their political importance, as either commercial harbours or the scene of battles; and, at the same time, what could be more pleasing than being able to observe, from one single point of view, the infinite variety of the sites, buildings, and costumes of each country; and thus travelling across the whole of Europe in an instant!’ (Journal de Paris, 18 November 1788, supplement, p. 1379).