Ballads have long been central to the antiquarian imagination. Collections of printed broadside ballads began to appear from the middle of the 17th century, if not earlier. Collecting ephemera, alongside other collections of more obviously historical and topographical material, was one of the key activities of early antiquarians.

In 1707 two of the three founding members of the Society of Antiquaries of London, John Bagford (1650–1716) and Humfrey Wanley (1672–1726), assembled significant broadside ballad collections. Both also worked on the collection of the Society’s early sponsor Robert Harley, 1st Earl of Oxford (1661–1724), the nucleus of whose ballads survive today in the Roxburghe Collection at the British Library, as well as for other collectors like Samuel Pepys (1633–1703). 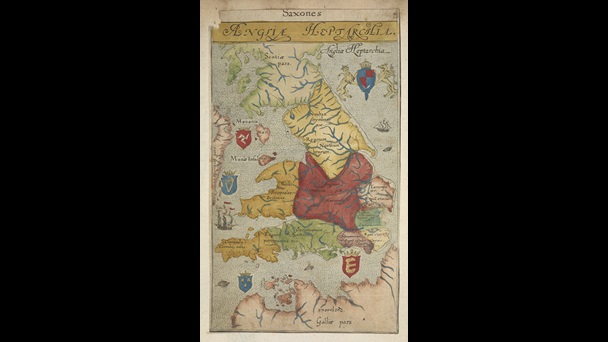 This map shows the English Heptarchy, or the seven Anglo-Saxon kingdoms, and is included in the print collection of John Bagford

At first sight the interest of antiquarians in acutely topical, and supposedly ephemeral, printed material such as ballads and pamphlets seems like a paradox. In fact, many early modern collectors of ephemera saw themselves as preserving important artefacts for the future. Printed ballads and pamphlets could be read as the first draft of history.

The 17th-century bookseller George Thomason (c. 1602–1666), who collected around 22,000 newsbooks during the English Civil War, wrote on the first page of his collection’s catalogue: ‘Actions that may be presidents to posteritie, ought to haue their records, & merit a carefull perseruation’ (BL C.38.h.21.). This sentiment, or versions of it, pops up again and again in early modern collections of ephemera. John Selden (1584–1654) said of his broadside ballad collection, probably assembled in the 1620s and 1630s, that

Though some make slight of Libels, yet you may see by them how the Wind sits: As take a Straw and throw it up into the Air, you shall see by that which way the Wind is, which you shall not do by casting up a Stone. More Solid things do not shew the Complexion of the times so well, as Ballads and Libels.[1]

Samuel Pepys copied this passage into his own ballad collection, which incorporated Selden’s, and it was reproduced again by Thomas Percy (1729–1811) as an epigraph to The Reliques of Ancient English Poetry (1765), at the high point of the 18th-century antiquarian ballad frenzy.

For many early antiquarians, an interest in ballads happily sat alongside their collections of historical, topographical, and other material which illustrated local history. The historian Anthony Wood, for example, assembled a large collection of ballads and pamphlets at the same time as writing a monumental history of the University of Oxford.[2] However, these different kinds of material were normally quite distinct, as antiquarian collections dedicated to specific places are usually concerned with recording local particularity, specific to and even characteristic of the place in question. Early modern broadside ballads, by contrast, were printed in London and their coverage of regional events was often limited and lacking in detail.

A briefe sonet declaring the lamentation of Beckles, a Market Towne in Suffolke 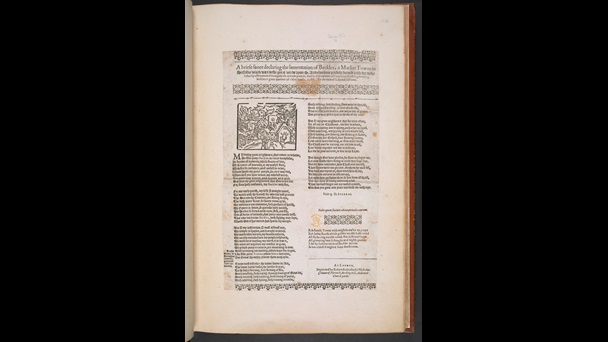 Written by D. Sterrie, this ballad tells the tale of a fire that destroyed Beccles in 1586. 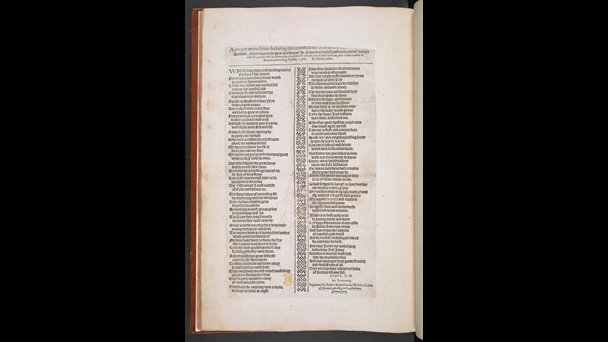 Thomas Deloney’s A proper newe sonet declaring the lamentation of Beckles [Beccles] was the first ballad written about the fire that devastated Beccles in November 1586.

These ballads were printed in London for a Norwich bookseller, Nicholas Colman, which suggests that they were primarily intended for regional audiences. These are full of detail, suggesting a Suffolk origin, and there is also some evidence of a ballad reporting another fire in East Dereham in Norfolk in 1581.[3] It is plausible that this kind of material might have been interesting to antiquarians compiling a local history. Both pictured ballads survive in a collection first recorded in Suffolk around 1830, apparently originating from the Tollemache family at Helmingham Hall, although its early provenance is uncertain.[4]

While their content is reasonably detailed and suggests a local origin, the image accompanying Sterrie’s A briefe sonet is much less location-specific. Pictorial woodcuts were still rare in broadsides during this period, so the presence of one here suggests some money and care went into its production. The image itself is precisely executed and full of dramatic details, including tiny firefighters and figures signalling their distress as well as clouds of billowing smoke alongside the flames. There are limits to this visual realism, however. It is hard to convincingly relate the scene of the woodcut to the town of Beccles today, in a way that distinguishes it from the ordinary urban architecture – houses, a church tower – of any other early modern town. Whatever the intentions of its producers, the image is not a picture of Beccles in particular, but of a generic town in flames. Nor is it likely that contemporary buyers would have expected this kind of localized detail. 16th-century ballads were rarely illustrated, and when they were it was typically with a generic image that permitted extensive re-use which allowed some of the original cost to be recouped.

The generic representation of place is absolutely characteristic of later broadside ballads, especially the fictional stories and songs collected by Harley, Bagford, Pepys and others. During the 17th century woodcut images became a routine part of the broadside ballad. They were a stock feature, together with a number of other increasingly fixed elements like black letter type.

One of these elements was the increasing tendency of titles to locate stories in specific English places, even when the text itself bore no relation to the place in question. Examples from the Roxburghe collection include A Fayre Portion for a Fayre Mayd: OR, The thriftie Mayd of Worstersheere (1656?); THE Mournful Maid of Berkshire: CONTAINING Her Woeful Lamentation for her dearly beloved Maiden-head (1684–1695); and The two Nottinghamshire Lovers, or the Maid of Standon of Nottinghamshire, and the Leicestershire Man (1635?).

A fayre portion for a fayre mayd 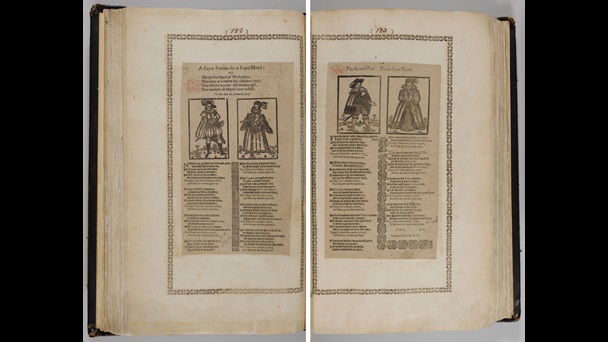 This ballad tells the tale of a young woman from Worcestershire.

The accompanying woodcuts are equally unlocalized. Typical are images of single figures, standing against a minimally sketched “outside” setting indicated by some grass. 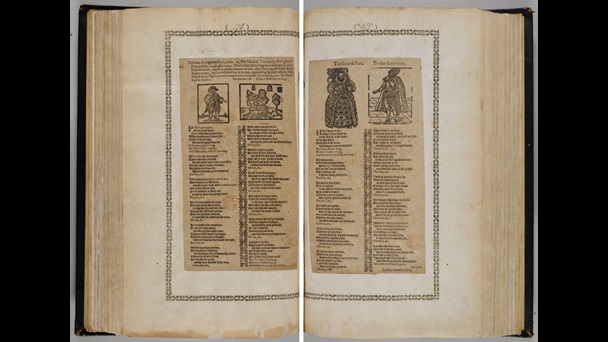 This ballad sings of two star-crossed lovers from the Midlands.

The large woodcut from THE Mournful Maid of Berkshire is even less topographically precise, representing a pair of lovers entwined on a bed that could be anywhere. The same image in fact appeared on a number of other titles, including The London Lasses Folly (1685), The Unfortunate Damsel (c. 1685–89), The Kentish Maiden (c. 1685–1703?), and many more.

The mournful maid of Berkshire 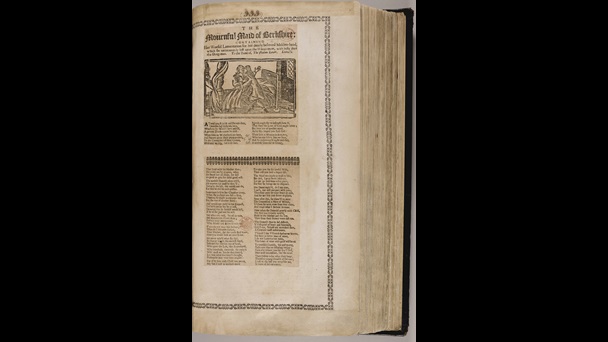 The woodcut illustrating this ballad, about a young lady from Berkshire, provides no indication as to the location of the song. This 16th century ballad is illustrated with a generic woodcut image of a gentleman, in period appropriate apparel.

The cooper of Norfolk While these pseudo-“local” ballads are rarely specific to or characteristic of particular places, their effect nonetheless was to seed the English landscape with stories. Ordinarily chorography, the early modern literature of place, typically describes ‘some particular place’ in the words of Thomas Blundeville (1594).[5] These ballads, by contrast, can be seen as a kind of mass-market chorography. Far from celebrating the “particular”, they distributed generic and highly repetitive representations of English places across the nation.

These songs and stories, although produced in London, were spread throughout the country by travelling singers and sellers. It is possible that using the names of places was a sales tactic, making the ballads more appealing to regional buyers. It is also worth noting, however, that early modern ballads located themselves in a landscape which was being transformed.

During the 16th and 17th centuries, Protestant reformers repeatedly attacked stories about the sacred nature of particular places. These beliefs were routinely condemned as superstitious and even idolatrous. In 1531 the reformer George Joye attacked the desire of his contemporaries ‘to runne aftir strange goddes, into hilles, wodes, and solitary places, there to worshipe stockes & stones (ye & paraventure to do worse thinges) of mannes making’.[6] Sometimes this kind of activity was replaced with an acceptably reformed version. For example, many holy wells which had previously been the site of pre-Reformation pilgrimage were repackaged as medicinal springs. At the same time, antiquarians became increasingly interested in both the surviving and newly invented myths of landscape.[7]

Ballads and other kinds of cheap print began to emerge at the same time as new local legends of place, and were a major source of information about the past for ordinary people. For example, none of the many wells in Nottingham and Yorkshire now linked with Robin Hood were connected with him before the middle of the 16th century at the earliest, when printed plays, poems, and ballads about him began to spread. Printed ballads became increasingly important for local historians and folklorists, despite the absence of identifying local detail. For both ordinary readers and antiquarians, place ballads offered a prompt for the imagination. They became part of a collective national reworking of the past, in the centuries following the Reformation.

[4] George Daniel bought this collection from the Ipswich antiquarian William Stevenson Fitch in 1832. Half of it was subsequently sold and is currently held in the Henry E. Huntington Library in California, where it is known as the Britwell ballads. The other half is held as the Huth broadsides in the British Library.