Braun & Hogenberg and after: the town plans of the 17th century

Until the late 16th century, the portrayal of cities was best known through paintings and illuminated manuscripts, book illustrations, broadsheets, large-scale bird’s-eye views or details on topographical maps. In 1572, however, the first volume of the Civitates Orbis Terrarum was published in Cologne. The sixth and final volume appeared in 1617. This great city atlas, edited by Georg Braun and largely engraved by Frans Hogenberg, eventually contained 546 prospects, bird’s-eye views and map-views of cities from all over the world. Braun (1541–1622), a cleric of Cologne, was the principal editor of the work, and was greatly assisted in his project by the close and continuing interest of Abraham Ortelius, whose Theatrum Orbis Terrarum of 1570 was, as a systematic and comprehensive collection of maps of uniform style, the first true atlas. The Civitates, indeed, was intended as a companion for the Theatrum, as indicated by the similarity in the titles and by contemporary references regarding the complementary nature of the two works. Nevertheless, the Civitates was designed to be more popular in approach, no doubt because the novelty of a collection of city plans and views represented a more hazardous commercial undertaking than a world atlas, for which there had been a number of successful precedents. In a letter to Ortelius dated 31 October 1571, Braun explains that:

For various reasons some learned men here in Cologne think that Master Frans’s Book of Cities would commend itself more to purchasers if the proper names of places, churches and gates were given in the native language, so as to satisfy both the learned and the unlettered: the learned because they will have the Latin descriptions on the back, the unlettered because each will see his own native town depicted with places named in a form familiar to him. I think the usefulness of this arrangement evident when pictures of cities are sold separately, but the citizens would like them less if they could understand nothing of what they read. For while this is nevertheless the practice in the descriptions [i.e. maps] of countries in your very beautiful Theatrum, and admitting its usefulness to the learned, yet you see how many people are distracted by it; and since Master Frans’s subject is a popular one, delighting the eyes even of the unlettered, it would appear sensible to me to accommodate ourselves somewhat to them … these are matters, Master Abraham, which I thought of most importance to you and on which no decision will be taken until we know your considered opinion.

‘Master Frans’, Frans Hogenberg, was the son of a Munich engraver who settled in Malines. He engraved most of the plates for Ortelius’s Theatrum and the majority of those in the Civitates, and may have been responsible for originating the project, as the phrase in Braun’s letter ‘Master Frans’s book of Citties’ would seem to imply. The copper-plates of the Civitates were engraved from drawings by a number of different artists and cartographers, the most significant of whom was Georg Hoefnagel. He not only contributed most of the original material for the Spanish and Italian towns but also reworked and modified those of other contributors. A large number of Deventer’s plans of towns of the Netherlands were copied, as were Stumpf’s woodcuts from the Schweizer Chronik of 1548, and Münster’s German views from the 1550 and 1572 edition of his Cosmographia. The Civitates provided a uniquely comprehensive view of urban life at the turn of the 16th century. Braun’s stipulation that ‘towns should be drawn in such a manner that the viewer can look into all the roads and streets and see also all the buildings and open spaces’ can be demonstrated in the map-view of Cologne in book I (1572) and the plan of Palmanova from book V. 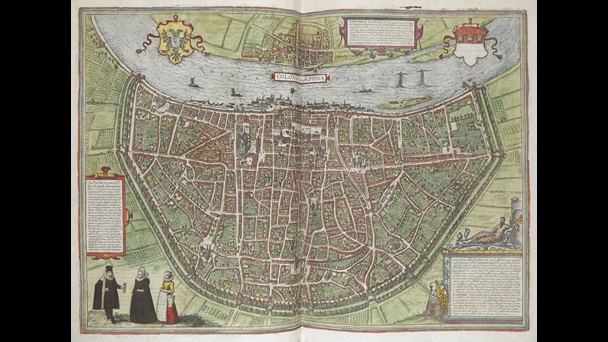 Plans of Cologne and Palmanova from the Civitates Orbis Terrarum by Gerog Braun and Frans Hogenberg.

In common with the other plans and views in the Civitates, both are decorated with figures in local dress. This feature was anticipated in Hanns Lautensack’s etched view of Nuremberg (1552) (14), whose group of citizens in the rural foreground add further authenticity to the highly accurate topographical details of what was effectively Germany’s cultural capital at that time. 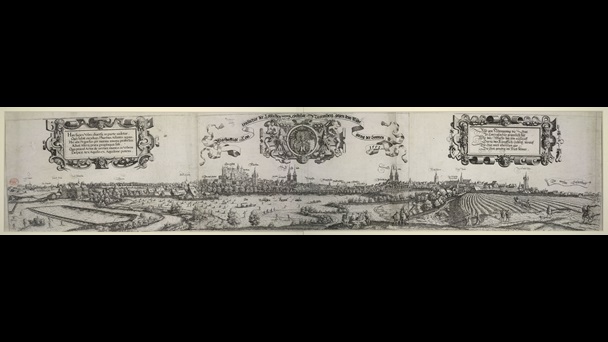 Braun’s motives for adding figures to the views, however, went further: as stated in his introduction to book I, he believed, perhaps optimistically, that his plans would not in consequence be scrutinised for military secrets by the Turks, as their religion forbade them from looking on representations of the human form. The plans, each accompanied by Braun’s printed account of the town’s history, situation and commerce, form an armchair traveller’s compendium, which the scholar Robert Burton in The Anatomy of Melancholy (1621) asserted would not only provide instruction but would uplift the spirit as well.

The success of the Civitates started a fashion for ‘townbooks’ that was to last for the rest of the 17th century and into the 18th century. Braun and Hogenberg invited other authors to copy their work, an offer taken up by Matthäus Merian the elder, who reproduced Braun and Hogenberg’s views sixty years later in his Theatrum Europaeum, a 21-volume work of topographic views published from 1640 onwards. The Amsterdam map publisher Jan Jansson purchased 363 of the plates of the Civitates in 1653, using 232 of them with little change other than to the imprint for his eight volumes of town views issued from 1657 onwards. This work contained 500 plates, almost all of European towns, and incorporated, in addition to those from the Civitates, 173 newly-engraved plates reflecting the more austere style of the mid-17th century. Jansson derived a number of these from Joan Blaeu’s two-volume town book of the Netherlands, published in Amsterdam in 1649. 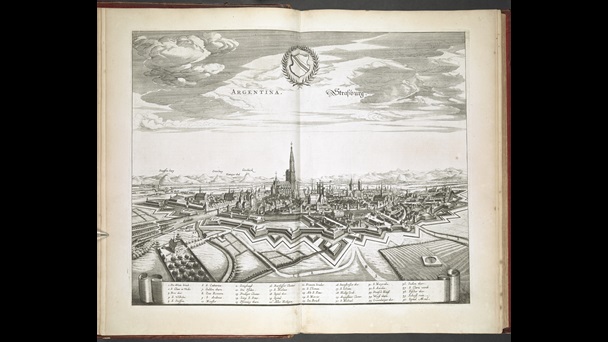 A view of Strasbourg published by Jan Jannson. 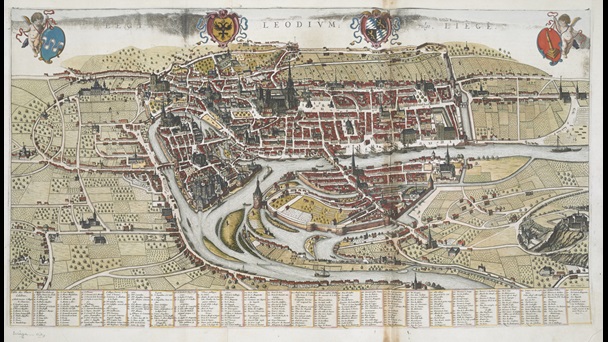 A plan-view of Liège published by Joan Blaeu.

The history of Blaeu’s townbook is intimately linked with the Dutch war of independence from Spain. Blaeu originally intended that both volumes should contain 110 plates, Volume I for the towns and fortresses in the Seven United Province, then struggling for independence, and Volume II for the towns controlled by Spain. By the time the first edition of the atlas was ready for publication, a number of the towns had changed hands and their new allegiances had been settled by the Treaty of Westphalia of 1648. For the second and subsequent editions, Blaeu rectified the confusion by moving the plates of the 26 towns captured by the United Provinces to the first volume, and by transferring to the second volume plates of five towns captured by Spain.

Other collections of town plans and views, similar in style to the Civitates and in many cases derived directly from them, continued to appear into the early 18th century. A relatively late example, which elaborated upon the theme of Braun and Hogenberg, was the Orbis habitabilis oppida et vestitus by Carel Allard. His collection (published in Amsterdam in 1695) consisted of a number of paired plates, one of which was a prospect, the other of which prominently featured a couple dressed in local costume with a prospect serving as a background. In this way, the reader could ‘travel the world … discoursing with remote peoples, admiring their costumes and ornaments, their churches and buildings’. 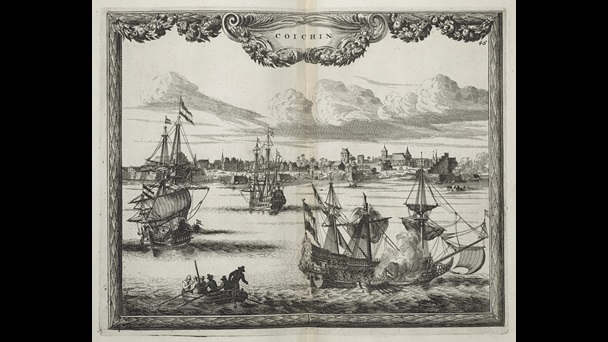 Although the townbooks gave European scholars their first glimpses of the non-European city, the printing of town plans was by no means confined to Europe. Amongst the first Japanese printed materials to reach the west was an anonymous map of Nagasaki brought back to Europe by Englebert Kaempfer (1651–1716), a German who in 1690 became physician to the embassy sent by the Dutch East India Company to the Shogun’s court in Edo (Tokyo). By this time the Togukawa Shogunate had banished Christianity, and only the Chinese and Dutch were permitted to trade with Japan, through the port of Nagasaki. Here, the Dutch maintained a small trading settlement on the island of Deshima. The map of the city, executed in c. 1680, was typical of Japanese toshizu (city maps) in that it was designed to be read on the floor and thus meant to be viewed from four different directions.

The popularity of the printed townbook did not cause the demise of manuscript town plans. These continued to fulfil an important role, especially for military purposes, affairs of state and for presentation. The ‘Livro do Estade da India Oriental’ prepared by Antonio Boccaro in 1646 was an expanded version of a survey of Portugal’s African and Asian colonial empire which had originally been commissioned in 1632 by Philip III of Portugal (better known as Philip IV of Spain). It was copiously illustrated with plans and views of the major towns, forts and trading posts of the empire by Barreto de Resende, who was accused by Boccaro of executing the plans without proper scientific measurement. Resende, who chose the more time-honoured method of the bird’s-eye view and map-view, was more concerned with depicting the town of Goa in an artistic style. He seems also to have been influenced by native Indian cartography, as the use of thick, vivid colour and the crowding together of groups of stylised minor building may testify. Perhaps Boccaro found this style somewhat old-fashioned and oriental.

The Duke's Plan of New York 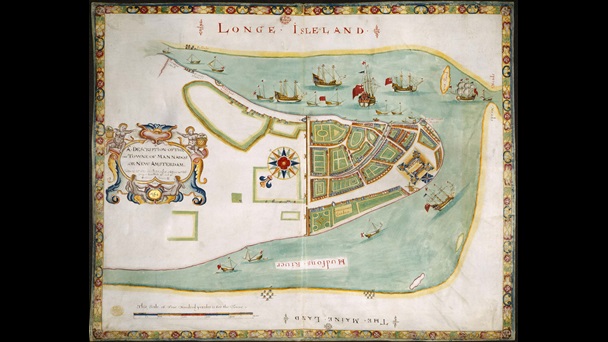 New York began life in the 1620s as the Dutch colony of New Amsterdam before being captured by the English in August 1664.

A British example, possibly prepared for James, Duke of York, and traditionally known as the ‘Duke’s plan’, shows the city on the southern tip of Manhattan Island then known as New Amsterdam. Originally a fort established by the Dutch in 1625, the settlement had developed into a flourishing port and trading city by 1664, when it was captured by the British and renamed New York. The title of the plan refers to September 1661, and suggests that the cartographer who executed the anonymous English plans three years later had access to the second of two surveys made in 1660 and 1661 by the Dutchman Jacques Cortelyou. The plan of 1661 may have been handed over to the English along with the town by the Governor, Petrus Stuyvesant.

Tangier, another recently acquired colony, was depicted by John Seller, who included a plan of the town in his Atlas Maritimus, or the Sea Atlas, published in 1675. It had been a British possession from 1662, when Catherine of Braganza gave it to Charles II as part of her dowry, until 1683, when it was evacuated.

This is an edited version of a text first published in James Elliot, The City in Maps (British Library, 1987).