Nick Grindle explores the relationship between text and pictorial topographical representations in the genre of chorography during the 17th century.

In the late 16th century chorography emerged as a new topographical genre in England. ‘What is Chorographie?’ one writer of the period asked his readers. ‘It is the description of some particular place, such as Region, Isle, Citie, or such like portion of the earth severed by itself from the rest’, was his answer.[1] From the mid-17th century, chorography began to enjoy a close relationship with the pictorial arts. As Nathaniel Carpenter wrote in 1635, borrowing his definition from the Greek geographer Ptolemy, ‘Chorography requires, as a help necessary, the Art of Painting, forasmuch as no man can fully and perfectly express to the eye the true portrait of cities, towns, castles, promontories, and such other things, in their true colours, livelyhood, and proportion; except they be skilled in the Art of Painting. So that this part is by some likened to that Art which the Greeks call Scenography’.[2]

The means to make images were more readily available than previously. The genre of printed chorography was well established on the continent in publications such as Antonius Sanderus’s Flandria Illustrata from 1641, a project sponsored by the ruling Hapsburgs and dedicated to Philip IV, King of Spain and Count of Flanders. At the same time there was more at stake in picturing a place than simply the information about the place yielded by the picture. Local sites were depicted in elaborate images that were affordable only to a very few people, and which drew on a very cosmopolitan language of topography. They also promoted specific political interests, and were seen as bearing directly on matters of good government and religion. 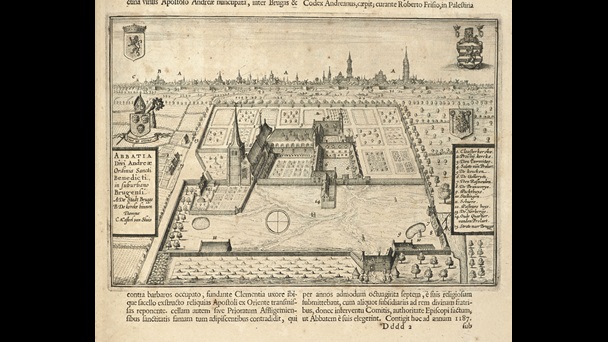 This engraving from Antonius Sanderus’ Flandria Illustrata shows St Andrews Abbey, a 12th century abbey at Bruges which was destroyed during the French Revolution.

The engraving of St Andrews Abbey near Bruges in Flandria Illustrata combines a detailed profile of Bruges with a view of the abbey from an elevated viewpoint. It is small, but technically demanding and very accomplished. By the 1630s few artists in England could produce such an image, and those who were employed to do so, such as Wenceslaus Hollar for Thomas Howard, 2nd Earl of Arundel, had been trained abroad. But the presence of artists such as Hollar enabled authors such as William Dugdale to break from the tradition of text-only chorography, and include detailed illustrations in books such as his landmark Warwickshire (1656), a publication that Dugdale acknowledged was in the mould of Flandria Illustrata. Foreign-trained such as Hollar brought with them the artistic know-how to produce ‘birds-eye’ views in which a site of interest are pictured from multiple viewpoints. 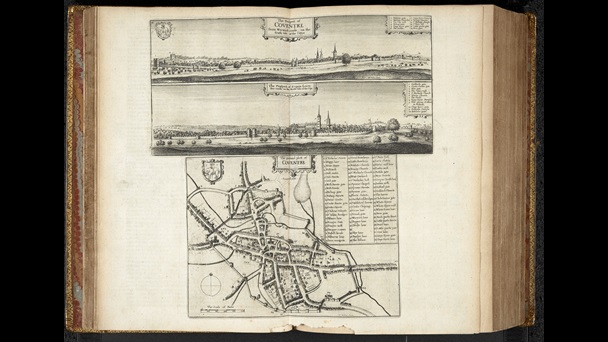 William Dugdale’s The Antiquities of Warwickshire (1656) was illustrated with etching by Wenceslaus Hollar, including this view and plan of Coventry.

Prints of large country houses were expensive to make but Dugdale’s way round this was to devise a system of subscription ‘whereby well-wishers contributed the cost of a plate, usually £5, and had their name, arms, and an appropriate phrase included on the plate’.[3] These prints would appear in books devoted to the history of a county. Many county histories included substantial sections on natural history and in cases such as Robert Plot’s The Natural History of Oxfordshire (1676) and its sister volume on Staffordshire (1686) the whole project was conceived as a natural history. By the late 17th century this usually meant an insistence on the methods of experimental philosophy: systematic observation and the gathering of data, or ‘Philosophy solidly built on foundation of experiment’ in the words of a leading exponent, John Ray. Leading experimental philosophers such as Robert Boyle had praised images for their impartial recording of facts. This gave a prestige to certain kinds of picture because they seemed free from the rhetorical flourishes such as shepherds and sunsets that might adorn a landscape painting or pastoral poetry. The distinction between fanciful and accurate views was not new: when Henry Wootton first saw a camera obscura used to make landscape drawings, he wrote to Francis Bacon: ‘I think there might be good use made of it for Chorography: for otherwise, to make Landskips by it were illiberal; though surely no Painter can do them so precisely’.[4] Allowing gentlemen to sponsor the production of plates and including their armature on the plate had the effect of identifying the gentry with specific places, and making the (sometimes contested) ownership of land seem entirely natural.

Wotton was confident that images could faithfully reproduce what the eye saw. Since the 16th century gentleman had been encouraged to learn how to draw. ‘By the feate of portraiture or payntyng, a capitaine may discriue the countray of his aduersary’, Thomas Elyot wrote in 1530. But it was domestic, rather than military, purposes which were uppermost in the mind of Elyot and his contemporaries: ‘And that whiche is moost specially to be considered, in visiting his owne dominions, he shal sette them out in figure, in suche wise that at his eie shal appere to hym where he shall employ his study and treasure’.[5]

Gardening, mapping, and intellectual pursuits were attributes of the wealthier gentry and the nobility. A crucial part of their appeal was that they were grounded in local knowledge, but not confined to it. Natural historians such as Robert Plot and Edward Lhuyd advertised widely for local informants, Lhuyd issuing over 4000 printed notices to the Welsh gentry in the 1690s.[6] The late 18th-century fashion for picturesque scenery has taught us to see that a brand-new building set in very formal gardens does not make for a very good picture, and that its emphasis on material possessions is vulgar and undermines any claim to good taste. But in the 17th century these pictures signified modern learning, up-to-date technology, all illustrated in high-quality and expensive engravings: in other words, everything that was the opposite of vulgar. These clear-cut images also transcended locality, by inviting viewers to agree that this is what a place really looked like. Engravings of specific places thereby helped to underpin and make possible a normative model of the world as something that was knowable by the (wealthy) viewer who surveyed it.

Ingestre Hall from Robert Plot's The Natural History of Staffordshire 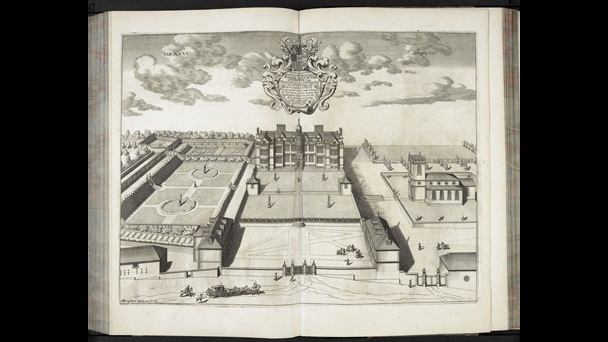 Birds-eye views tended to sever the landed estate from its local context. Nearby villages are sometimes included in the view, but there is usually little sign of the labourers or the industry (such as coal mining) on which the estate built its wealth. The manufactures of a place were often discussed in natural histories since they were a valuable means of information about the local environment. What interested authors like Dugdale and Plot was the way that knowledge of a place was a means to expand man’s empire over the natural creation. This had been a key theme in Elizabethan political discourse and was specifically addressed in Francis Bacon’s writings on scientific methods in the 1600s, and the point had been reiterated and updated in Robert Boyle’s work after the Restoration of the Stuart monarchy in 1660. It is therefore no surprise to find that Plot’s books deal with the natural history of a county but were prefaced with a dedication not to a local dignitary but to Charles II and James II. It gave pictures an important public role, as a dedicatory poem in Plot’s Natural History of Staffordshire pointed out: ‘Describe the Land, Israel’s commander [Joshua] said / And the glad Artists straight the word obey’d’.[7]

Under the nexus of economic rationalism and experimental philosophy, pictorial descriptions of modern estates and fashionable gardens became part of the vocabulary of national improvement and entered mainstream political discourse. Nowhere is this clearer than in the genre of Travels which were published in the 1690s by men such as the Whig churchman and exile Gilbert Burnet who were deeply interested in experimental philosophy and committed to a vision of Protestant political empire.[8] Their travel narratives combine detailed description of history, architecture, natural situation, industry, economy and government, with rhetorical flourishes in which the successes of one form of (Protestant) government are compared with the ill effects of Papal authority. Bold visions of plenty or desolation are sketched for the reader’s instruction, just so they get the point. They did not include expensive copperplate engravings but their language was clearly intended to invoke the same visions of prosperity and order that were celebrated in birds-eye views.

In the 18th century birds-eye views were mocked as being irredeemably vulgar and hopelessly remote from acceptable standards of pictorial beauty. But we should remember that their 17th-century patrons would have conceived of them as anything but ‘map-work’, in William Gilpin’s withering phrase, because while they were grounded in detailed descriptions of particular sites and buildings, they were also evidence of far wider and more important developments: man’s growing empire over creation, the landed classes’ successful stewardship of the land, and (for many after the 1680s) reformed Christianity’s inevitable triumph over visibly discredited foreign Roman Catholic governments.

[8] See Gilbert Burnet, Letters, containing an account of what seemed most remarkable in travelling through Switzerland, Italy, and some parts of Germany &c in the years 1685 and 1686 (Amsterdam, 1688).