Over 3000 drawings by Samuel Hieronymus Grimm are housed in the British Library’s Department of Manuscripts: the impressive result of over 20 years touring to record ‘everything curious’ in England. A project funded the antiquary Sir Richard Kaye, Grimm’s drawings capture local history and contemporary life in England in the last decades of the 18th century. Brett Dolman explores.

The British Library’s extensive collections of British topographical drawings have been assembled over the last 250 years largely as a result of the collecting instincts of antiquarians with a passion for recording, in word and image, the urban and rural landscapes around them. Whilst the British Museum Department of Prints & Drawings concentrated on acquiring drawings of primarily artistic interest, the Museum’s then Department of Manuscripts (now part of the British Library) gradually assembled a wealth of material by ungarlanded or unknown artists. Their drawings of lost and altered landscapes, architecture and the social scenes of the past, especially when placed beside the associated written material, provide a wealth of useful and sometimes unique information on local history and antiquities.

Sometimes, the written word and drawings are found in the same archive. J.W. Jones, a London merchant with a keen enthusiasm for local history, produced 28 volumes of ‘extra-illustrated’ or ‘grangerized’ histories, supplementing his copies of Clutterbuck’s History and Antiquities of Hertford and Hasted’s Kent with thousands of drawings and engravings assembled from other sources.[1] In other cases, antiquarian notes and drawings of the places concerned have arrived in the Library’s collections through different routes, and it is for the researcher to make the valuable connections between associated archives. It is in this juxtaposition of, for example, 18th-century sketches inside a village church alongside parish notes made by the then rector that the use and importance of these collections can be seen. 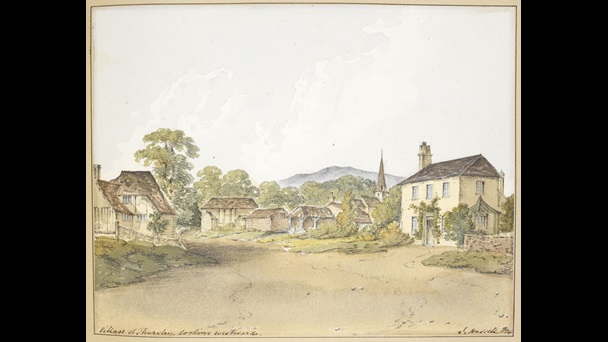 This watercolour by John Hassell comes from a grangerised book at the British Library.

Within these collections, there is a wealth of material from the 18th and 19th centuries in particular, reflecting not only the development of the great age of watercolour painting and topographical art, but also the opportunities for travel and amateur drawing brought about by improved transport links and access to ‘drawing masters’. This period saw a growing passion for ‘touring’ amongst the gentry and nobility as a civilized leisure activity, and these early tourists liked to have illustrated travel books to hand, and records of where they had been. Artists, professional and amateur, were dispatched across the country to provide the drawings, whilst whole families employed their own tutors so that they too could acquire the new fashionable artistic skills.

The end of the 18th century also saw the accelerated enclosure of the English countryside, for land itself became more valuable as improved technologies made the exploitation of it more efficient. This, in turn, both advanced a view of the countryside as important and (if you happened to own some of it) prestigious, but also encouraged a celebration of the ‘natural’ and ‘picturesque’ landscapes that would soon vanish under the industrialization and railway tracks of the 19th century. William Gilpin published his theories of the picturesque in the 1790s and a legion of artists, inspired by the 18th-century landscapes of Thomas Gainsborough, would continue the tradition into the following century, championed by the celebratory rustic scenes of John Constable.

One of the most notable artists to feature in the Library’s collections of drawings from this period is the Swiss emigré Samuel Hieronymus Grimm (1733–94), a ‘vivid illustrator of social life in Georgian England’,[2] who travelled extensively throughout his adopted country in the late 18th century.[3] The Library possesses 2,662 drawings in 12 volumes, covering many of the counties of England[4], and a further 886 watercolours in seven volumes devoted to Sussex.[5] 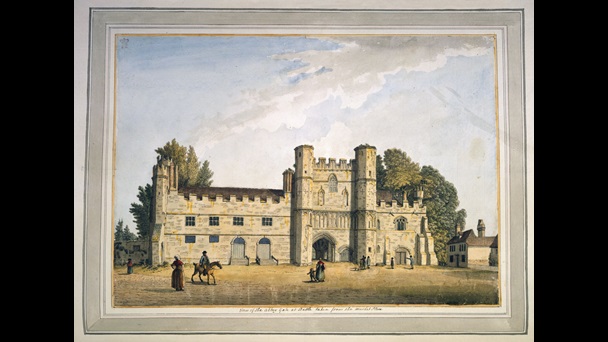 Grimm arrived in England in 1768, and worked as a commissioned artist for numerous patrons, including the lawyer and antiquary Sir William Burrell.[6] For 21 years or more, he held the lasting friendship and patronage of the ecclesiastic and baronet Sir Richard Kaye, and it was for him that Grimm toured the country to depict ‘everything curious’ to assuage Kaye’s thirst for recording the history and antiquities of England:

The Doctor had unfortunately lamed himself and could not stir out; but Grimm, who was with him some months, the Doctor’s butler, who is very intelligent, and myself, made an expedition out every morning to survey the country, and either returned to a late dinner, or took provisions with us, and Grimm made drawings of every thing curious….[7]

These drawings were bequeathed by Kaye to the British Museum in 1810, where they joined the Sussex collection bequeathed by Burrell in 1796.[8] 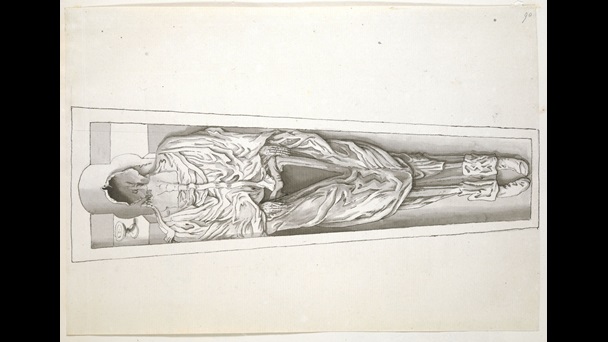 Grimm traversed the country recording ‘everything curious’ for Sir Richard Kaye in the late 18th century. The five drawings shown here are taken from the 12 volumes of sketches of England by Grimm given to the British Library in 1810

Grimm’s work for his antiquarian patrons was complemented by commercial commissions: satirical mezzotints for various publishers appeared in the 1770s with evocative caricatures of 18th-century life, and it is perhaps therefore unsurprising that his views are often populated landscapes, depictions of rural life rather than lifeless vistas.

One patron, the naturalist Gilbert White, felt moved to comment:

His buildings, human figures, quadrupeds, waters, perspective among trees, are good; but his trees are not so pleasing: he also has a vein of humour, but I shall not allow him to call it forth, as all my plates must be serious.[9]

Nonetheless, this quality is precisely that which makes Grimm’s topographical drawings so appealing and potentially informative for a modern audience.

A Cricket Match in Devonshire Street 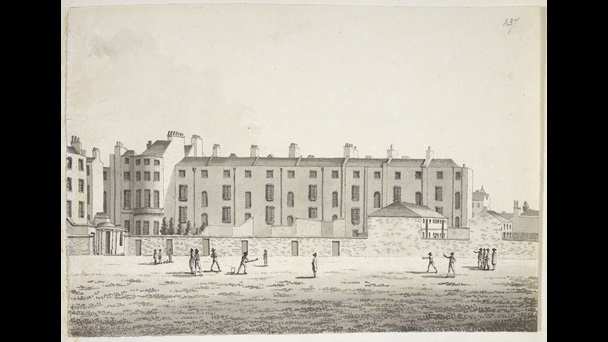 Whether depicting a cricket match in London or a procession of village schoolchildren, Grimm’s drawings for Kaye feel fresh and animated, combining this affection for the human in nature with an eye for the picturesque – Grimm seems, like other artists, to have omitted foliage and other obstructions when defining the ‘best view’, perhaps even moving trees so that they would better frame a particular house. His method was described by Gilbert White:

He first of all sketches his scapes with a lead pencil; then he pens them all over, as he calls it, with indian ink, rubbing out the superfluous pencil strokes; then he gives a charming shading with a brush dipped in indian ink; and last he throws a light tinge of water-colours over the whole.[10] 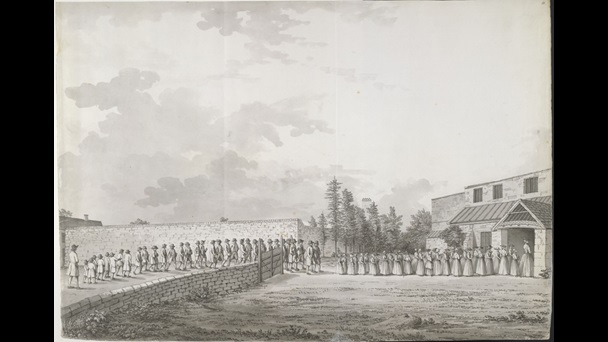 Grimm painted this scene outside St Wilfrid’s Church during a visit to Kirkby to see Sir Richard Kaye, who was the rector of the Parish

The British Library’s Kaye collection includes initial pencil sketches, and more finished drawings in indian ink and wash, with a few watercolours. Other collections of Grimm’s drawings and watercolours can be found in the British Museum (Department of Prints & Drawings), the Bodleian Library, Oxford, and at Bristol University; his larger works, in watercolour, and before about 1764 in oil, and displaying similar sensibilities, can be found across many European museums and galleries.[11]

This is an edited extract of an article first published in the Electronic British Library Journal.

[1] The British Museum purchased this collection from Quaritch the booksellers in 1884.They are now British Library, London: Add MS 32348–32375.

[3] See Rotha Mary Clay, Samuel Hieronymus Grimm (London, 1941), p. xxxi. This is the only biography of Grimm to date. It includes a survey of extant works and a biographical account of his career pieced together from notices by his patrons and contemporaries and from the evidence of the works themselves.

[6] Grimm produced his seven volumes of Sussex watercolour drawings for Burrell. Many of these have been published in Walter H. Godfrey and L. F. Salzman (eds.), Sussex Views, being the Jubilee Volume of the Sussex Record Society (Printed for the Sussex Record Society at the University Press: Oxford, 1951) and in John H. Farrant, Sussex Depicted:Views and Descriptions 1600–1800, Sussex Record Society, vol. lxxxv (Lewes: Sussex Record Society, 2001). He also worked for the naturalist Gilbert White, Henry Penruddocke Wyndham (1736–1819), author of A Gentleman’s Tour through Monmouthshire and Wales and with whom he travelled for three months in 1777, and Cornelius Heathcote Rodes (1755–1825) of Barlborough Hall in Derbyshire.

[7] From a letter of J. C. Brooke, Somerset Herald, to the antiquary Richard Gough, describing a fortnight spent with Kaye in Kirkby in Ashfield in 1779: see John Nichols, F.S.A., Illustrations of the Literary History of the Eighteenth Century, consisting of authentic memoirs and original letters of eminent persons, vol. vi (London, 1881), pp. 388–90. The phrase ‘everything curious’ also appears in a letter written by Francis Grose, who included forty views by Grimm in his Antiquities of England and Wales, published in 1773: quoted in Clay (op. cit.), p. 89.