Fire and the sword

James Elliot discusses town and city maps from the 17th to the 19th century, and the ways in which they reflect the issues of urban growth.

The medical and social mapping of urban centres was primarily a 19th-century phenomenon which flourished in an age when the problems of large cities and industrialised societies were of such a scale that new approaches, and new techniques of investigation were required to understand them. Maps thus became a tool with which to analyse urban processes. Thematic mapping of urban areas had, however, long predated the 19th century in its concern with specific events in a city’s history, such as sieges, fires and other disasters.

The frequency of sieges in military campaigns arose from the presence on the battlefield of the fortress and the fortified town, which provided a degree of stability at a time when armies were small, ill-regulated and relatively immobile. Siege warfare continued to be a central element in military geography well into the 18th century. Most of the major sieges of recent history have been the subject of the map-maker’s attention, for the military campaign and the town plans alike were traditional subjects for the cartographer’s skills. Siege maps, moreover, could be used both as news and propaganda, as demonstrated by de Hooghe’s bird’s-eye view of the investment of Luxembourg in 1684. 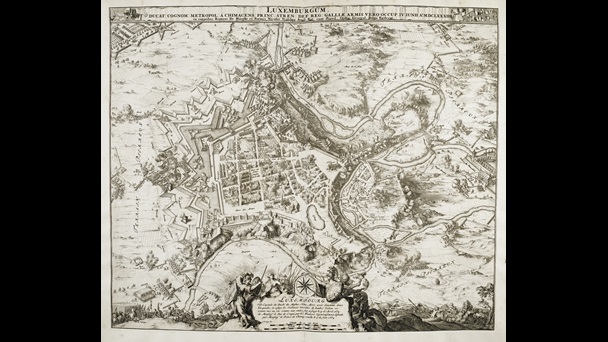 This etching by Dutch printmaker Romeyn de Hooghe shows a map of Luxembourg in 1684.

The city had been besieged after Louis XIV ordered French troops to occupy the Duchy in 1681 as part of his policy to extend the frontiers of France. In order to establish some legal basis for his claims, special courts known as Chambres de Réunion had been set up, whose task was to examine old deeds and charters for evidence that a particular territory had once belonged to France. When the Metz Chambre de Réunion decided in 1681 that Louis had such a claim to the Duchy of Luxembourg, the province was invaded. The city finally capitulated in June 1684 after a desperate siege culminating in a devastating bombardment. Romeyn de Hooghe, an Amsterdam engraver and draughtsman specialising in political and religious subjects as well as views and plans of the great events of his day, produced an etching showing a bird’s-eye view of the final stages of the siege.

The Siege of Colchester by the Lord Fairfax 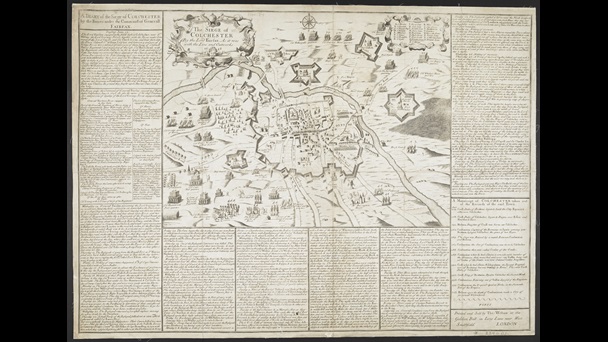 During the English civil war Parliamentary forces led by Lord Fairfax sieged the city of Colchester, documented in this broadsheet from c.1648.

From England came an anonymous broadsheet featuring a generalised map of the siege of Colchester of 1648. This began when George Goring, Earl of Norwich, was trapped in the town after he and Sir William Waller had unsuccessfully attempted to stage a Royalist rebellion in Kent and Essex. The Parliamentary commander Lord Fairfax invested the town on 14 June, and the Royalists surrendered on 22 August. The author of the map was with the Parliamentary forces, as revealed by his comment that ‘the word of the King’s forces at ye fight was Charles, the ground they fought on Maries: ours, God’s - our help’.

Abundant evidence of political bias was evident too in Abel Boyer’s plan of Preston. In October 1715, a small force of Scottish Highlanders and English Jacobites assembled in Northumberland as part of the general uprising in support of the claim to the throne of James Edward Stuart, the ‘Old Pretender’. The rebels crossed into Lancashire, hoping for assistance from both Roman Catholics and High Anglican Tories. In the event, the support failed to materialise, and the incompetent leadership of Thomas Foster led to an ignominious surrender at Preston on 14 November. Boyer, a French Huguenot who had arrived in England in 1689, was a journalist, theatrical producer, and compiler of one of the best English-French dictionaries of its day. He also published The Political State, a monthly journal giving, for the first time, regular details of the debates in the Houses of Parliament. His zealous Whig inclinations and support of the Hanoverian succession explained his satisfaction at the defeat of the rebels; the cartouche of his map was decorated with bound and bedraggled Scots and Jacobites.

A Map and Plan of the Town of Preston 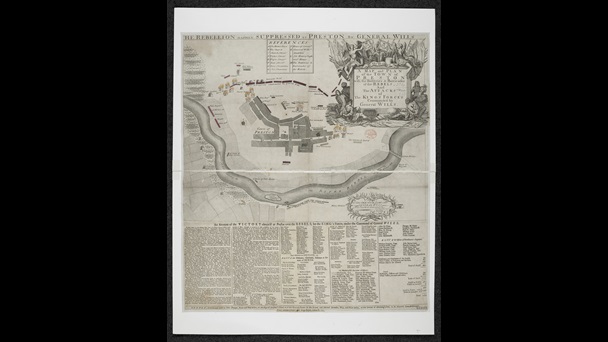 This map of Preston by French printmaker Abel Boyer shows the town following the defeat of the Scottish Jacobites in 1715.

A later and more elaborate military depiction was ‘Paris en Mai 1871’, published to show the plan of campaign of the French government army in the suppression of the Paris Commune. It reveals how much both urban planning and military considerations were taken into account by Baron Haussman in 1859, who, as prefect of the Seine, directed the rebuilding of the city under Napoleon III. Haussman’s design incorporated wide boulevards which were difficult to barricade. At the same time, they offered excellent fields of fire for artillery, while allowing large bodies of troops and cavalry to move easily along them. The flanks of any obstacle could be turned by means of obliquely intersecting streets and the vast star-shaped places with their radiating routes. It is significant that the government troops first entered the rebuilt western areas of the city, and that the last stand of the Communards was in the warren of old narrow streets of the 20th Arrondissment around the Pere-Lachaise cemetery. 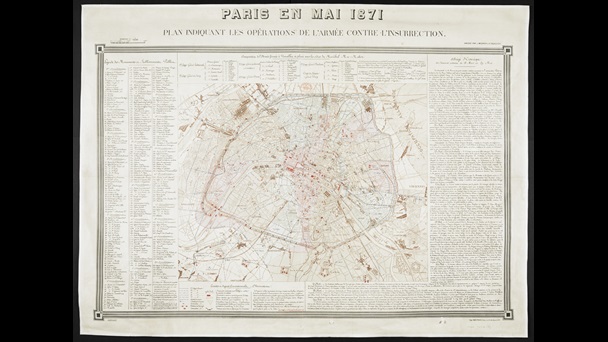 A coloured map showing the campaign of the French government army to suppress the Paris Commune of 1871.

The devastating effect of urban fires, before the introduction of building regulations, proper fire service and mains water supply, also stimulated cartographic activity. In the wake of trhe Great Fire of London, 1666, many surveyors and cartographers were employed to map the destroyed city and the replacement rising from the ashes. The fire which started in a baker’s chimney in Pudding Lane on 2 September 1666, and which Samuel Pepys in his diary described as the ‘most horrid, malicious and bloody flame’, eventually destroyed some 13,200 houses, 87 churches, the halls of 47 livery companies, and major buildings such as the Royal Exchange, the Guildhall and St. Paul’s Cathedral. The Czech artist Wenceslaus Hollar, Royal Scenographer to Charles II, had more than a mere professional interest in the Great Fire. He had spent seven years and had run into debt while preparing an enormous plan-view of the city ten feet by five, when the disaster rendered his surveys and drawings obsolete. His etchings of the survey of John Leake and others were a response to the widespread public interest aroused in Europe. The map showed the maximum extent of the destruction, with the sites of the major public buildings, including Old St. Paul’s Cathedral, clearly marked. The halls of the city livery companies were denoted by their coats of arms. Ten years after the fire, the plan of John Ogilby and William Morgan of 1676 showed how quickly the capital had been rebuilt. 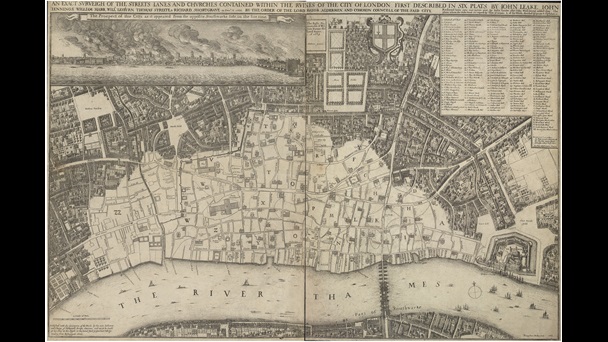 Wenceslaus Hollar documented the destruction wrought by the Great Fire of London in this etching from 1669.

The danger of fire prompted, in later years of the 19th century, the large-scale production of fire insurance plans by companies such as Charles E Goad in Canada and Britain and the Sanborn Map Company in the United States. Fire insurance plans developed from the specific requirements of insurance underwriters, who needed accurate large-scale maps of the major urban centres to enable them to assess the risks attached to an insurance proposal for any given building. Also, in an age where large fires were much more common than today, they had to be aware of the geographical spread of their client’s properties in order to avoid concentrating all their risks in one group of buildings.

Goad, born in London in 1848, moved to Canada in 1869 and published fire insurance plans of all Canadian towns and cities with a population of over 500. He returned to England in 1886. His London company dominated the production of British fire insurance plans, and covered 126 areas including the centres of most major cities by means of coloured large-scale plans which continued to be revised until 1970. 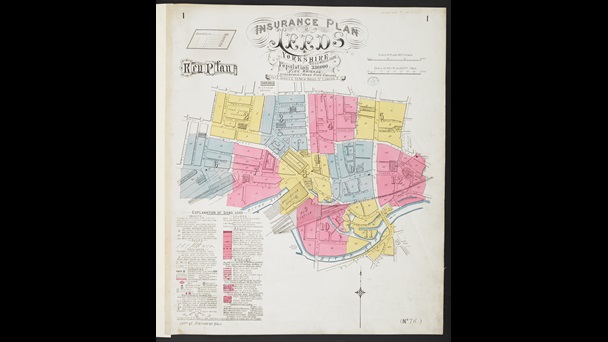 This detailed map of Leeds was used to assess the risk of fire in newly proposed buildings during the late 19th century.

The fire insurance plans represented the last word in specialisation and utility towards which urban cartographers had progressed since the 4th century BC. The simple outlines on the clay tablets of the Babylonians evolved through the symbolic bird’s-eye views of the Renaissance into the precise and functional street-finders of the 19th and 20th centuries. The plans of the cities they depict reflect the role of the city as the hub of civilisation. As the poet Paul Claudel writes, ‘la ville est la forme de l’humanité’.

This is an edited version of a text first published in James Elliot, The City in Maps (British Library, 1987).