As domestic tourism became fashionable in the 18th century so too did interest in country houses and gardens. Karen Limper-Herz takes a closer look at some of the stately homes, and the publications portraying them, that were particularly popular in this period.

The gardens at Stowe

The gardens at Stowe are well known to visitors today, but they were already a popular tourist destination in the middle of the 18th century. Richard Temple, first Viscount Cobham (1675–1749), developed the gardens at Stowe, first to the designs of Charles Bridgeman (d. 1738) in the 1710s and 1720s, and then to those of William Kent (1686–1748) in the 1730s. The gardens also included ornamental buildings designed by Sir John Vanbrugh (1664–1726), and they began to attract visitors. Cobham was very keen for his gardens to be open to the public, and he sponsored the second and subsequent editions of the guide to Stowe, first published by Benton Seeley in 1744. After retiring from politics in the 1740s Cobham devoted his time to further improvements to house and gardens at Stowe under the auspices of Lancelot ‘Capability’ Brown (1716–1783).

A general plan of the woods, park and gardens of Stowe 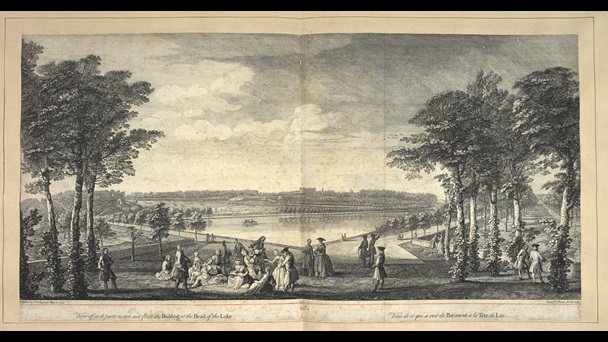 This plate shows musicians playing for a party enjoying the scenic surroundings of the gardens at Stowe.

A general plan of the woods, park and gardens of Stowe (1739) is from the collection of the Rt Hon. Thomas Grenville (1755–1846), whose brother George, Marquis of Buckingham (1753–1813), owned Stowe from 1770 until 1813. The book opens with a plan of the estate, followed by views of the house and the gardens from different vantage points, illustrating how people visited and enjoyed the gardens.

All engravings in the volume are black and white, and give the viewer a true impression of what Stowe looked like in the 18th century – and still looks like today.

Stowe: the Gardens of Viscount Cobham 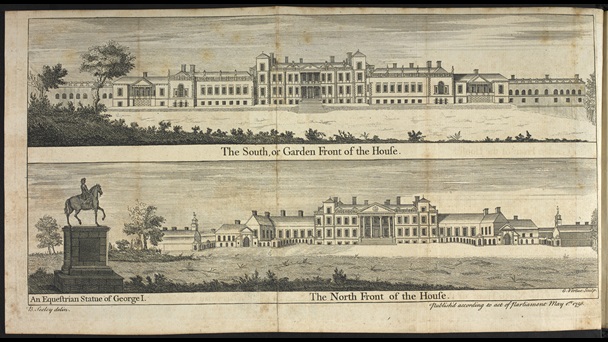 This engraved plate depicts both the southern and northern prospects of the main house at Stowe, which had undergone significant expansion in the first half of the 18th century.

Stow: The gardens of the Right Honourable the Viscount Cobham (1751) contains plates showing Stowe, its gardens and descriptive texts of the buildings, as well as a dialogue between two visitors to the estate. The book would probably have been read at home rather than during a visit to Stowe. All buildings found in the gardens are accurately depicted and are thus recognisable to visitors today. The dialogue about a visit to Stowe is between two men: Polypthon, a visitor to the area, and Callophilus, a local of Buckinghamshire with a negative outlook on the world and on life in general. The reader follows the two gentlemen on their journey through the gardens and listens in on their conversation about what they see and what associations they have when viewing the buildings. The gardens offer something for everyone: contemplative walks for the thoughtful; beautiful nature for visitors just wanting to enjoy them; enchanting ideas for the romantic genius; noble entertainment for the man of true taste; and amusement for the trifling genius. The gardens are described as an epitome of the world in general, but while Polypthon sees them as an ‘amicable Conjunction of Art and Nature’, the more critical Callophilus says that ‘the simplicity of Nature … was too much polished away’.

A description of the gardens of Lord Viscount Cobham at Stowe 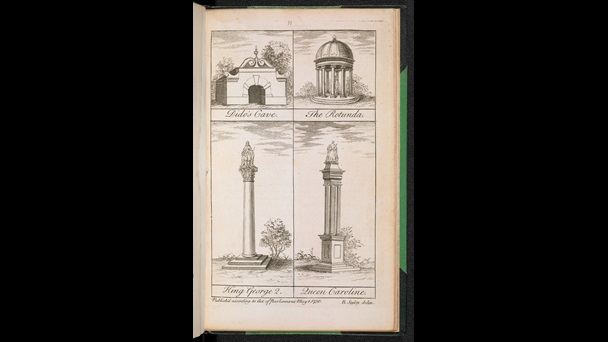 This engraving depicts some of the many magnificent stone monuments, statues and follies that populate the gardens at Stowe.

This pocket-sized volume is the sixth edition of the guide to Stowe which Viscount Cobham sponsored. It is recognisable to us as a guidebook to the estate, and could even be used when visiting Stowe today. It was designed to accompany the visitor during his tour of the estate, and consists of a number of accurate plates as well as descriptions of the different buildings. They allow readers to work their way around the grounds, either from home or with the book in hand during a visit. Cobham very much wanted his gardens to be appreciated by others, and his support for a widely available guidebook, which was published in numerous editions, is testimony to this aim.

A description of the Antiquities and Curiosities in Wilton House 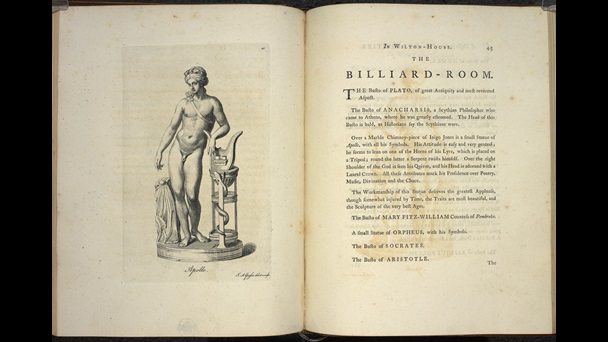 This engraving depicts a small statue of Apollo, with all his traditionally associated symbols, which was housed in the billiard room at Wilton.

While Stowe was famous for its gardens in the 18th century, Wilton was known for its large collection of antique busts and statues. A description of the antiquities and curiosities in Wilton-House (1769) contains plates illustrating the objects, together with brief descriptions. It is testimony to the influence of the Grand Tour on the tastes of the upper classes. By publishing illustrations and descriptions of items acquired during the Grand Tour, the taste for classical antiquity was filtered down to the middle classes.

A View in Kew Gardens of the Alhambra and Pagoda This delicately coloured etching with aquatint shows the ornamental pagoda in Kew gardens, which was built as a surprise for Princess Augusta, mother of King George III.

Kew Gardens as we know it today dates from the initiatives of Princess Augusta (1719–1772) and Prince Frederick (1707–1751) in the 1750s and 1760s. Princess Augusta employed Sir William Chambers (1722–1796), who was responsible for building a number of follies in the gardens. The most significant of these was the Pagoda, the only one of his buildings that still survives; the others were built with cheap materials and have either not stood the test of time or been replaced by later developments. The changes initiated by Princess Augusta show the influences of the Chinese and of chinoiserie, as well of a revival of classicism made popular by the Grand Tour. The gardens were open to the public and included a pleasure ground, wilderness, formal gardens, exotics, animals and birds. Chambers’s book publicised the gardens at Kew to the world, making them an example for gardens of this kind abroad, most notably probably the Garden Kingdom at Wörlitz in Germany. The latter was founded by Prince Leopold III Friedrich Franz of Anhalt-Dessau (1740–1817) following a visit to Kew during his European tour in 1765–6.

Further changes to the gardens at Kew were made in the reign of King George III (1738–1820), who united the gardens of Richmond and Kew. It was the botanist Sir Joseph Banks (1743–1820), who worked with George III and acted as superintendent to the gardens, who changed them from mere show gardens to a scientific arena with economic potential by planting samples collected from across the world. The gardens declined under King George IV (1762–1830) before they were reopened to the public by King William IV (1765–1837) in 1831.

Garden designs for country and town

The gardener, landscape designer, surveyor and architect Batty Langley (1696–1751) took exception to the very regularised garden designs in fashion at the end of the 17th and the beginning of the 18th centuries. He used his best-known publication, New principles of gardening (1728), to advocate a free style of gardening with extensive views and vistas. Langley’s book consists of seven parts and instructs its readers in designing and planting their own gardens and cultivating their plants. The work suggests geometrical layouts for a garden and provides information about the cultivation of fruit trees, forest trees, evergreens and flowering shrubs, as well as plants and herbs for kitchen gardens, with the latter section being by far the most extensive. Langley advocated a mixture of different plants and trees in a garden ‘to make it look as if nature had planted them together’, something that was unusual in English gardens at the time. 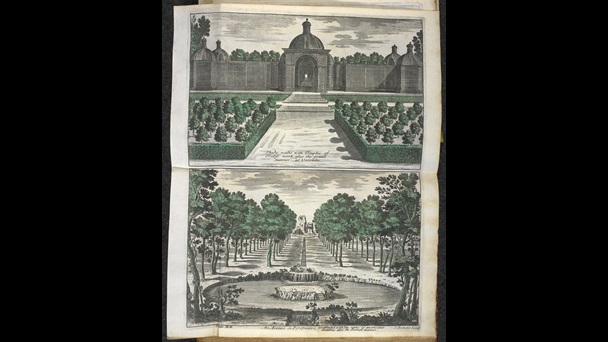 This hand-coloured plate provides an example of the kind of geometric garden layout favoured by Langley.

The book is illustrated with a number of plates, designed by Langley’s brother Thomas and handcoloured in this copy. They show garden layouts as well as designs for statues and decorative ruins. Langley saw both as vital components of a natural garden, where they provided entertainments for owners and visitors and marked the end points of walks and vistas. Langley’s book is dedicated to King George II (1683–1760), and this copy, bound in red goatskin and tooled in gold to a panel design, featuring the royal coat of arms in the centre of both covers, may have been a presentation copy.

The City Gardener, by Thomas Fairchild 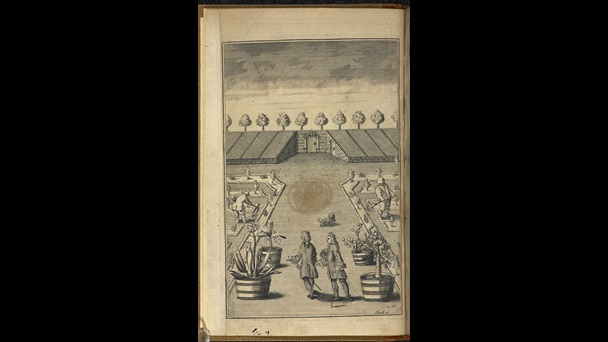 Owning and enjoying a garden was not only the privilege of people living in the countryside. The gardener Thomas Fairchild (1667?–1729) owned a nursery in Hoxton in London, specialised in exotic plants and used these to experiment and create new varieties. His gardens, known as the City Gardens, were popular for their size and the types of plants on display. They could be visited by people interested in finding out what kinds of plants could be grown in an urban environment.

Fairchild believed that people needed to have flowers around them to be happy, and was always concerned about the impact that pollution had on the plants in his city garden. He used The City Gardener (1722) to pass on his knowledge to his fellow citizens and to provide information for the growing of plants in all kinds of urban environments. He described the plants suitable for squares and large open spaces in London and Westminster, discussed the difficulties of growing a garden near the Thames, described plants used for courtyards and enclosed spaces in London, and gave information about the kinds of plants people could grow on balconies and windowsills. The frontispiece to The City Gardener is thought to show Fairchild’s own gardens, with one of the gentlemen in the foreground probably representing him. In addition to more native plants in the flowerbeds tended by the two gardeners in the plate, the four tubs in the foreground portray Fairchild’s more exotic plants: an agave, a palm tree, a banana tree and a cactus. Fairchild was in contact with gardeners abroad, such as Mark Catesby (1683–1749) in Virginia, who sent him seeds of plants that were not native to Britain for him to grow in London. Fairchild was also one of the first to have grown bananas in this country.

In his will Fairchild bequeathed money to the charity school and churchwardens of St Leonard’s in Shoreditch to pay for an annual Whitsuntide sermon on the wonderful works of God and the creation. These sermons became known as the ‘Vegetable Sermons’.

This article is an edited version of Karen Limper-Herz chapter 'Interior and Garden Design' in Georgians Revealed: Life, Style and the Making of Modern Britain (London: The British Library, 2013), pp. 34–43.