Renowned scriptwriter and playwright Julian Mitchell offers a fascinating case study of how history could be appreciated and invented through the experience of landscape.

Goodrich Castle was built in the 12th and 13th centuries on a steep bluff above the river Wye, probably to guard an important ferry on the Ross to Monmouth road from Welsh raiders. The keep was of a stern grey stone from the Forest of Dean, but the walls were of softer red sandstone, dug from the castle ditch. And there they stood till the civil war, when ‘Roaring Meg’ was brought by the Parliamentary forces to force the castle’s submission. It was then abandoned to wind and weather, though its remains, seen from the shelter of his boat, were described by William Gilpin in 1782 as the first ‘correctly picturesque’ scene on the recently established Wye tour from Ross to Chepstow. It was raining hard and Gilpin was not an archaeologist but an aesthete interested in visual effects, so he chose not to get out of his boat and climb the steep path to examine the ruins. It was among them, though, that William Wordsworth met the little girl of his poem ‘We are Seven’ in 1793, and he described Goodrich as ‘the noblest ruin in Herefordshire’. It remained one of the most popular subjects for artists making the tour for the next fifty years.

The Keep of Goodrich Castle, Herefordshire 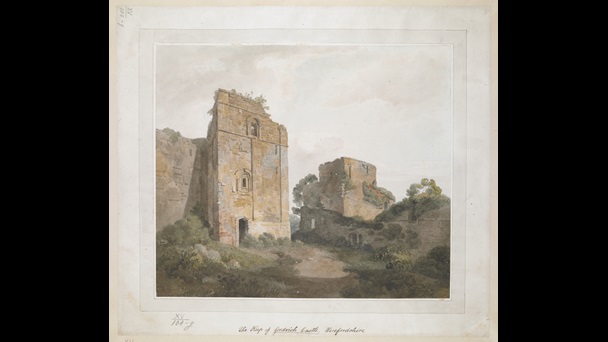 The overgrown ruins of Goodrich Castle are pictured in this anonymous watercolour from c.1800.

In the 1820s Sir Samuel Meyrick, a very rich man with an enormous collection of medieval armour, thought the castle would, after a good deal of refurbishment, make an excellent place to display it. But the owners, two local sisters, haggled and hesitated, and losing patience, he decided that rather than a restored ruin, he would have a brand new castle. He bought the next headland upstream and hired the young Edward Blore to design one in the most gothic of gothic style. Begun in 1828, and the construction hampered by unusually bad weather even for the Welsh Borders, Goodrich Court was sneered at by some from the beginning. The Reverend T.D. Fosbrooke, for instance, was a guide-book writer as well as a vicar whose parish looked directly at the Court from across the river. He admired Blore’s fine stone tower with its machicolations, but deplored the stumpy steep-shingled wooden spire on top of it, and its four further corner spires. ‘I hope,’ he wrote, ‘the next lightning storm will knock down the whole five thingummies’. 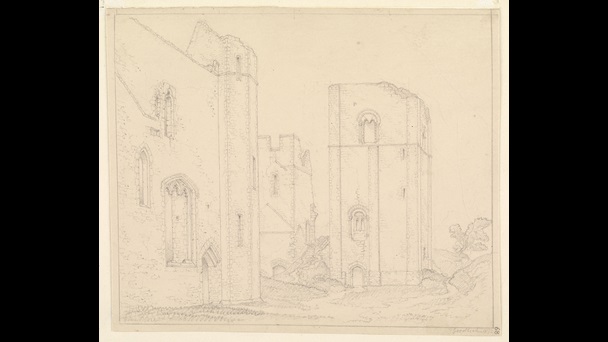 The architect and topographical artist Edward Blore executed this drawing of the ruins of Goodrich Castle in 1872.

He was to be disappointed: the new castle, complete with thingummies, was finished in 1832. Newman’s Illustrated Guide to the Wye called it ‘a structure of very extraordinary character’ with ‘mimic muniments’, and to modern eyes it looks pure Disney. But like all Disneylands it soon attracted large numbers of visitors – so large, in fact, that at times the tour of the Court was restricted to half an hour so that everyone could get in. Visitors arrived at a turreted gatehouse on the Monmouth-Ross road (realigned to keep the traffic at a distance), then crossed a drawbridge to reach the mansion. They rang a sonorous bell, and a massive door swung open to discover a powdered footman in blue plush breeches. He admitted them to a series of galleries, where the housekeeper or one of her staff led them first to the Armoury, 84 feet long, with standing and mounted figures ‘clad in the ancient panoply of war’. There were Indian arms and Moslemarabic tribes with chain-wrought hauberks, there were crusaders, there were Italians and Spaniards, there were antiques and curiosities and paintings. Even the chapel and library were, Newman said, ‘well worth a fortnight’s sojourn to inspect’. But what most people liked best was the room laid out as a jousting match. There was a Royal box, there were ‘heralds, spectators and umpires, standing round, and two knights, mounted on wooden horses, not hobby-horses’, wrote an American visitor. But though she admired it immensely, she thought it was a pity the faces of the contestants were not more lifelike. She also thought it wasn’t much of a place to sit in in the evening. Not all were so pleased. Charles Greville thought it ‘a strange kind of bastard castle’, and Louisa Anne Twamley that its newness and sharpness made it ‘striking rather than beautiful’. William Wordsworth, revisiting Goodrich in 1841, became apoplectic. The Court was set up, he thought, ‘to show how far modern art can go in surpassing all that could be done by antiquity and Nature, with their united graces, remembrances, and associations. I could have almost wished for powder, so much the contrast vexed me, to blow away Sir Meyrick’s impertinent structure and all the possessions it contains’.

Engraved Illustrations of antient Arms and Armour, from the Collection of Goodrich Court 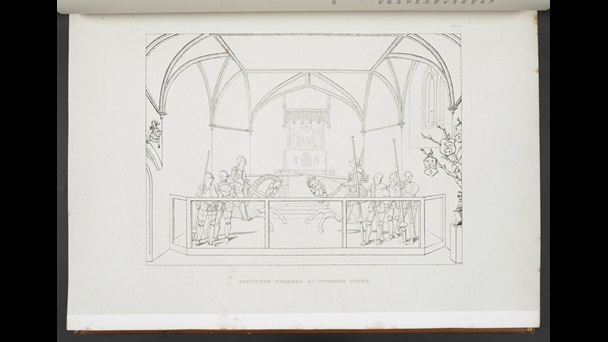 Samuel Rush Meyrick published his extensive collection of arms and armour in 1830, illustrated with numerous engravings of Goodrich Court.

But ‘antiquity and Nature’, in the form of the decaying ruin on the next headland, were of less interest to most Wye tourists than Meyrick’s modern medievalism, just as many modern visitors to ancient sites seem to prefer spending more time in an interactive reconstruction than in the place itself. Ruins are, after all, just a lot of old stones, whereas a model lets you imagine the original – or someone else’s idea of it, at least. All of which raises several old questions. At what stage of decay do you start repairing a ruin? How much do ‘improvements’ actually improve anything but visitor numbers? How do you prevent increased numbers of visitors spoiling the site they have come to see? Some people thought the Duke of Beaufort had been wrong to tidy up Tintern Abbey, removing bits of fallen choir screen to stop trippers tripping over them. They didn’t like the smooth lawn he put down and were horrified by the people who came over on day trips from Bristol in their macintoshes, and sat and ate their picnics on it. Romantics might want wildness and decay, yet even Wordsworth’s sister Dorothy ate her sandwich there. Doubtless there will always be disagreement on these issues, and it’s a pity the Court has not survived to be a living example of what some people will never like.

Plan of the Goodrich Court Estate 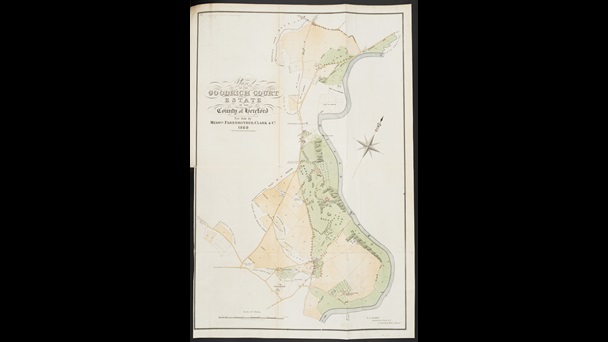 This plan dates from 1869 and documents the sale of the Goodrich Court estate.

It was never a very happy place for its builder. Meyrick’s only child died there in 1837 and he himself in 1848. The armour was soon sold, then the house, which was altered and altered again; and again. But by 1940, it was impossible to live in; and unsaleable. It was saved for a time by the war. The 400 boys of Felstead School were evacuated there from what was thought to be the potential front line in Essex. But they went away again in 1945, and that was that. In 1949 the interior was stripped of beams and panelling, and the rest was blown up, as Wordsworth wished. All that now remains is the gatehouse. Goodrich Court had lasted not quite a hundred and twenty years.

Meanwhile Goodrich Castle had been taken over in 1920 by the Office of Works, which restored it to a safe and acceptable state. It remains a very popular tourist site. And, somewhat tidied up, antiquity and Nature, with all their united graces and remembrances now in their 9th century, stand again without impertinent rival.

I owe much of this to Rosamond Lowe’s  Sir Samuel Meyrick and Goodrich Court (2003).