Kate Heard traces the journey of a British Library print depicting St Paul's Cathedral – from its early history in the archive of one of England’s greatest print collectors to the library of King George III.

One of the great delights of the King’s Topographical Collection (K.Top) is the wide variety of material that can be found by turning the pages of the albums. Evocative watercolours, meticulous architectural drawings, careful military surveys and elegant panoramic prints are set alongside ephemeral advertisements, inexpensive woodcuts and hurried sketches. This disparate material was assembled in the Royal Library during the reign of George III (1760–1820) in a quest to understand the world in as many ways as possible. K.Top not only provides wonderful information on individual places, but also on the ways in which the world was perceived at the turn of the 19th century: the Horned Heifer bred by Mr Sharp at Melton Mowbray is as important a part of that town’s history as St Mary’s Church or the Butter Cross. 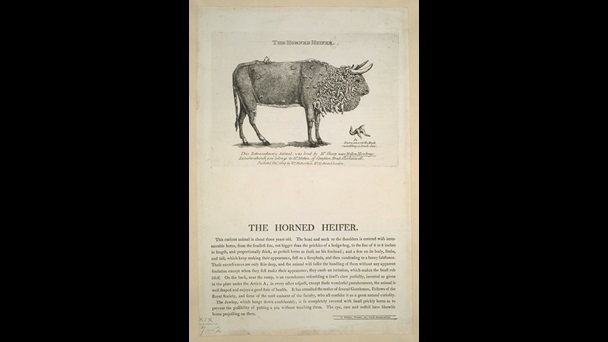 Animal oddities have always captured public attention: this print, published in 1809, reveals the peculiar case of the Horned Heifer

How did these very varied works come together in the King’s Topographical Collection? For the high quality watercolours and drawings there is sometimes documentary evidence of a purchase by or gift to the King, but for the smaller prints the process is less well documented. The case of a small print of St Paul’s Cathedral, however, shows that the prints themselves can sometimes tell us about their history and the route by which they came to be part of George III’s great collection of views and maps, now held at the British Library, St Pancras. 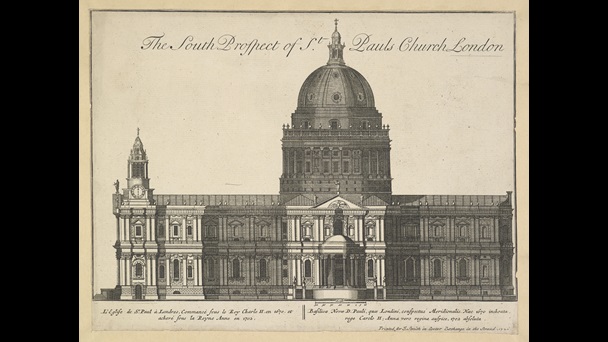 This engraving was one of many issued to commemorate the new St Paul's Cathedral; the verso is inscribed with the numbering system of prolific 18th-century print collector, Joseph Gulston

The South Prospect of St Pauls is one of a set of views of the cathedral from the third volume of the Britannia Illustrata, which was published in a number of volumes between 1707 and 1729. The first two volumes were published by David Mortier in 1707, and were disparagingly described by Richard Gough as depicting ‘mansion houses, with full dressed gentlemen and ladies parading in meanders of distorted box and yew’. Third and fourth volumes were added from 1708. The whole was reissued by Joseph Smith (active c.1697–1732) in a number of incarnations between 1709 and 1729. The print of the South Prospect in K.Top has a publication line of 1720 and comes from one of Smith’s reissues of the series.

The print was produced, therefore, exactly a hundred years before the accession of George IV, who passed his father’s topographical collection to the British Museum. What was its history before it reached its final resting place? Can we tell who owned it and why they acquired it? Perhaps surprisingly, we can.

The history of the print

The key to the print’s earlier history lies on the back of the sheet, which is inscribed in bold writing with the number ‘3383’. This is in the hand of Joseph Gulston (1745–1786), a flamboyant figure who has been described as ‘the prince of English print collectors’, and who spent so heavily on his hobby that he was forced to sell his family home in 1775, his books in 1783, and his beloved prints just before his death in 1786. By the time of the 1786 sale, Gulston had amassed 41,500 portrait prints, 11,000 satirical and political prints and 14,500 topographical prints as well as a good collection of ‘fine art’ prints by masters such as Albrecht Dürer and Wenceslaus Hollar.

The preponderance of portrait and topographical prints in Gulston’s collection made it typical of its time, but little of its character is revealed in the sale catalogue, which the 19th-century print historian Chaloner Smith grumbled was ‘lotted in a very curtailed and promiscuous manner’. Gulston’s collection was probably organised by subject: the sale catalogue lots are organised by subject matter and it is inconceivable that the dealer John Greenwood reorganised a collection of over 50,000 prints in order to sell it. A list by Joseph Gulston of his portrait prints, now in the Bodleian Library, also suggests an interest in such classification, with prints arranged by the status of the sitter as was usual for such collections at the time.

Gulston inscribed the back of each of his prints with a number, and occasionally also with information on its acquisition. Today, prints that were in his collection are identifiable by these inscriptions. Most of Gulston’s prints are untraced, and those that are known are scattered across many collections. But it is clear from even a small sample that the numbering system does not record the organisation of Gulston’s collection, but rather its acquisition: he clearly numbered prints as he received them. It seems that any groupings by subject that are found are because Gulston bought bodies of material at the same time. He must have acquired 15,000 or so of his prints by 1776 since he noted on number 15,077 (now in the British Museum) that he had acquired it ‘of James Granger’ who died in that  year – the phrasing suggesting that it was given or sold by Granger personally.

Gulston’s system allowed him to record the number of prints he had amassed – and quantity was clearly important to him. Horace Walpole, who despised Gulston, described how he acquired with ‘rapaciousness’ but had ‘no sort of taste’: ‘it is the most underbred swine I ever saw, but I did not know it was so ravenous’. Walpole was reacting to the distress of William Cole, who had courteously offered Gulston the chance to select a few prints from his collection in 1772, only to discover that 187 of the best had been appropriated by his guest.

The annotation 3383 on the reverse of the South Prospect shows that it is one of a group of London topographical views (numbered in the range 3300 and 3400) acquired by Gulston relatively early in his collecting career. The material in this numbering range is a diverse group relating to London topography and it seems likely that it had previously been the property of another unidentified collector and purchased wholesale by Gulston. Gulston continued to acquire London topography: two further London views, for example, are numbered 12,272 and 12,460. The numbering system, however, reveals an early interest in topography which petered out in favour of portrait prints.

Gulston probably acquired at least six of the St Paul’s views published by Smith. The West Prospect was numbered 3378, the East Prospect 3382 and (as we have seen) the South Prospect 3383. Today, all of these are in K.Top. The prints numbered 3379, 3380 and 3381 have not been identified, but may have been other views from the set, which do not appear to have entered the royal collection.

Interestingly, a ‘shadow’ of the earlier collector’s arrangement can perhaps be seen in Gulston’s numbering – sets of views appear to have been placed together by a printmaker or publisher. So Smith’s views of St Pauls, as we have seen, are all together, but there are also a group of views of London by Samuel Wale, which appear to have been kept together. This is clearly not Gulston’s own system: often at least one of the set has been misplaced and has been numbered separately from the others demonstrating that the earlier arrangement was already starting to disintegrate now the prints were in his ownership. The occasional disjunction of sets in the 3300 sequence also helps us to ascertain that this was a larger acquisition, rather than Gulston concentrating on London topography but acquiring piecemeal: if this had been the case, he would not have muddled the sets together to such an extent, but would have numbered each set as he acquired it. So Gulston acquired the South Prospect as part of a job lot of prints of London topography before 1776, from a collector who seems to have stored his or her topographical prints by creator rather than by location: we have got our print half-way through its century’s journey.

The South Prospect was acquired for the royal library at Gulston’s sale in 1786, where it may have been among the ‘thirty-one prints relative to St Paul’s, fine and curious’, which formed lot 32 on the 19th night of the sale, and which sold for £1 and 10 shillings. But it is unclear what approach, if any, there was to the acquisition of material at the sale for K.Top. It may be that only British subjects were acquired in both topography and portraiture: a work with a foreign subject has yet to be located that had been acquired for the royal collection.

There are other small clues. The King bought a print of the south side of St Mary le Strand after James Gibbs (number 6556) but did not acquire two of the other views in the set (numbers 6554 and 6555), which are now in the Department of Prints and Drawings of the British Museum. And as we have seen, it appears that the South Prospect is missing some of its companions. Either these sets of prints were separated into different lots or, perhaps more likely, an unknown dealer purchased them at the sale and then offered the royal library the pick of the material acquired. But there is no sense that prints were selected to fill gaps in the royal collection: there are no impressions of the ‘escaped’ west and east prospects of St Mary le Strand in K.Top.

When it reached the royal collection, the South Prospect was placed with other views of St Paul’s Cathedral in K.Top. As we have seen, there was no discrimination between autograph architectural drawings and these reissued prints: everything was placed together to create a visual topographical encyclopaedia.

Joseph Smith published the South Prospect because he saw a market – an interest in prints of notable buildings and monuments. We do not know who bought the print when it was first issued but their concern appears to have been the creator rather than the subject, with groups of views by different publishers kept together rather than distributed by topographical site. When it was acquired by Joseph Gulston, it was probably as part of a job lot rather than because he was especially interested in the subject matter, and we see his concern for topographical works waning as his collection progressed.

On Gulston’s death, the South Prospect was acquired for the royal collection, where it was placed with other views of St Paul’s, with the aim of gathering together as much knowledge as possible about that building. That, in the space of a hundred years, our little print can have graced three collections with such different concerns, shows us that the interests of collectors of topographical prints were as diverse as the works themselves.