In the early 19th century two men influenced the design of the Royal Pavilion at Brighton and its grounds as we know them today – Humphry Repton and John Nash.

Humphry Repton (1752–1818) was a general merchant by training, but he moved to the countryside when his business failed. There he devoted most of his time to his garden as well as his talents for drawing and writing, and in 1788 he became a professional landscape gardener. He adopted the term ‘landscape gardener’ to describe his profession because, as he saw it, his work combined the ‘powers of the landscape painter and the practical gardener’. He viewed gardens as works of art rather than works of nature.

Sketches and Hints on Landscape Gardening, by Humphry Repton 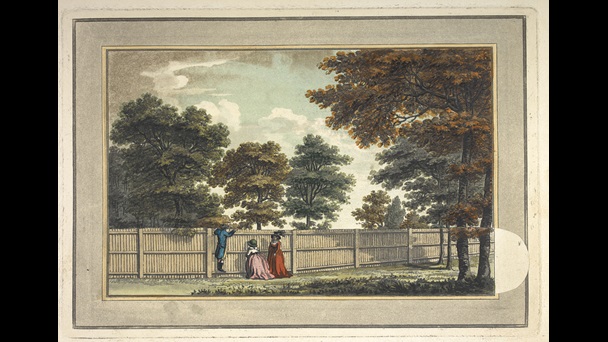 This hand-coloured etching and aquatint portrays Brandesbury (Brondesbury Park), the estate of Lady Salusbury as it was before Repton redesigned the landscape.

Sketches and Hints on Landscape Gardening, by Humphry Repton 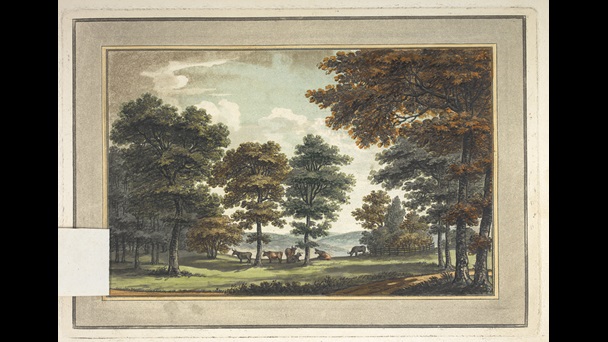 This hand-coloured etching and aquatint, with the flap pulled back, reveals Repton’s design for Brandsbury.

Repton’s first book, Sketches and hints in landscape gardening (1794), is also his most famous work. When asked to design a garden or a garden’s improvement for a client, Repton drew upon his so-called ‘red books’. These contained plans and watercolour sketches showing a garden or landscape in its original and in its proposed new state. He achieved this by employing so-called ‘flaps’ or ‘fliers’, which showed the original landscape when in place and revealed the proposed improvement when opened. Repton’s clients were mostly wealthy, and his improvements mainly concentrated on small changes with which he could achieve maximum effects. In contrast to other garden designers of his day, Repton did not usually organise the work – he acted as a consultant, with his ‘red books’ providing plans, records of his work and display copies for his clients. In Sketches and hints in landscape gardening Repton discusses general considerations to bear in mind when designing a garden, such as the location of the house, the use of water, park scenery and the approaches to a property.

Sketches and hints in landscape gardening also used this technique of the ‘red books’. It featured facsimiles of designs that Repton had originally produced for his clients, although in this publication the plates were engraved in aquatint. The volume contains references to proposed plans for, among others, Holkham, Tatton Park and Welbeck. Repton is today most famous for his writings and the use of ‘red books’. His designs, however, often existed only on paper and were not always carried out.

In the early 19th century two men influenced the design of the Royal Pavilion at Brighton and its grounds as we know them today – Humphry Repton and the architect John Nash (1752–1835).

Designs for the Pavilion at Brighton, by H. Repton From Repton’s decadently printed folio volume outlining his designs for the Prince Regent’s Pavilion at Brighton, this plate depicts the ‘General View from the Pavilion’.

Designs for the Pavilion at Brighton, by H. Repton From Repton’s decadently printed folio volume outlining his designs for the prince regent’s Pavilion at Brighton, this plate depicts the ‘View from the Dome’.

Humphry Repton was the first man to plan a redesign of the Royal Pavilion at Brighton, his plans some of which are shown above, were published in 1808. They were never executed in this form, however, although they influenced those of John Nash some years later. Repton’s designs contain a discourse of the prevailing styles of architecture – Greek, Gothic, and ‘Modern’ – as well as illustrations, in colour and black and white, showing his planned designs and a general layout of the Pavilion’s grounds. In this publication Repton used the style of his famous ‘red books’ to illustrate his plans. They show the existing designs on so-called ‘flaps’ or ‘fliers’ which can be moved to reveal the planned new designs. Repton’s plans as featured in this publication are not very detailed, but they show a recognisable design for the Pavilion’s exterior and its grounds. Repton’s designs reflect his desire to move beyond established architectural styles to something more exotic and elaborate in response to his clients’ needs.

John Nash was responsible for some of 19th-century Britain’s most famous buildings and infrastructure developments. Between 1795 and 1800 Nash worked in partnership with Repton, and their designs for fashionable villas and gardens in rural and suburban settings turned Nash into one of the most fashionable London architects of his age. Their partnership broke up in 1800 over a financial dispute. Both Repton and Nash aimed at achieving a picturesque effect, and both men worked with views and vistas to achieve maximum impact. The architecture of Nash’s houses complemented the designs of Repton’s gardens and vice versa, and their design approaches made small areas appear more spacious.

Nash’s period of activity corresponded to a time when established architectural concepts and tastes were being questioned, and he could offer alternative designs to receptive clients, stressing his designs’ exoticism and otherness. When he began to work for the Prince Regent in the 1820s, Nash stopped taking private commissions and concentrated on redesigning royal properties. His first commission was to redesign the Royal Lodge in Windsor Great Park and to design a number of rooms in Carlton House, at that time the Prince Regent’s London residence.

His most important commission for the Prince Regent was that of rebuilding the Royal Pavilion at Brighton between 1815 and 1823. Nash turned the neoclassical structure designed by Henry Holland in 1787 into an ‘Eastern’ style to match that of the stable blocks redesigned by William Porden between 1803 and 1808. The inspiration for Nash’s designs came from Mughal architecture as well as the designs drawn up by his former partner Humphry Repton in 1808, which had never been executed.

The Royal Pavilion at Brighton, by John Nash 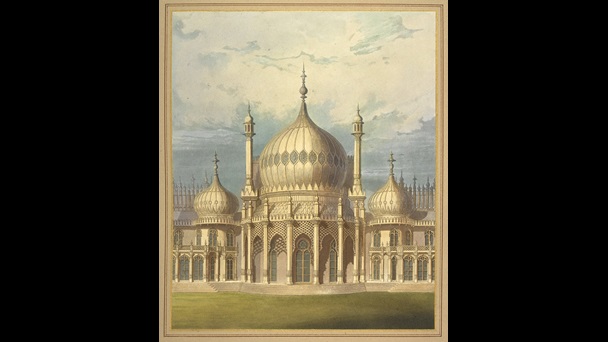 This brightly coloured etching with aquatint plate shows the large central dome of the Royal Pavilion.

Featured below is a cross-section of the building, illustrating both the layout of the rooms and the innovative structure, for which Nash employed technically advanced cast-iron domes.

The Royal Pavilion at Brighton, by John Nash 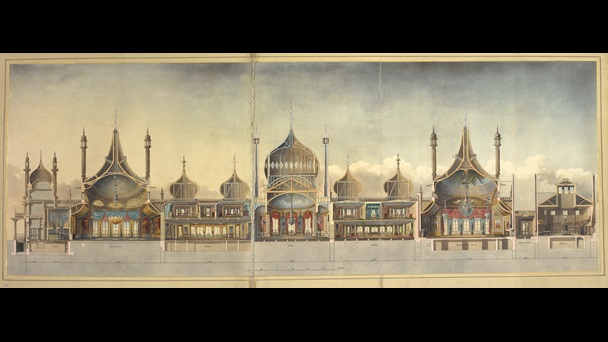 This cross-sectional illustration displays both the architecturally advanced exterior and the decadently decorated interiors of the Royal Pavilion.

While working for the Prince Regent, Nash was also responsible for the design of Regent’s Park, including terraced houses for the middle classes on the periphery and Regent’s Canal on the northern perimeter. He also planned Regent Street and designed some of its houses and the open space of Piccadilly Circus. This plan of Nash’s proposal for Regent’s Park, Regent’s Canal and Regent’s Street was published in 1812.

Nash’s last big commission for King George IV was less successful. In 1822 he was employed to redesign Buckingham House and turn it into what is now Buckingham Palace, the main London residence for the new king. However, the king kept changing his mind about the designs. Costs spiralled out of control, the designs were universally criticised, and when the king died in 1830 the building was left unfinished, fatally damaging Nash’s career.

Nash wanted his architecture to give pleasure to people, and he has certainly had a lasting influence on buildings across Britain. Very much an architect of his time, he turned the decline of Georgian classicism to his advantage. He skilfully adapted his designs both to his clients’ tastes and the buildings’ locations to create dramatic and stylistically varied effects.

This article is an edited version of Karen Limper-Herz chapter 'Homes and gardens: Architecture' in Georgians Revealed: Life, Style and the Making of Modern Britain (London: The British Library, 2013), pp. 26–33.