Inigo Jones and the Ruins of Stonehenge

Alexander Wragge-Morley examines Inigo Jones’s theory that Stonehenge was a temple built by the Romans.

These days, Inigo Jones (1573–1652) is mostly remembered for his buildings. One of the first English architects to work in the classical style, Jones was responsible for the Banqueting House in Whitehall and the Queen’s House at Greenwich, as well as for laying out the piazza at Covent Garden. Closer to his own times, however, Jones was also known for insisting on an idea that seems remarkably improbable today: that Stonehenge was a Roman temple, constructed according to the principles of classical architecture. Published by his student John Webb (1611–1672) in 1655 as The Most Notable Antiquity of Great Britain, Vulgarly Called Stone-Heng, Jones’s interpretation attracted widespread interest in the second half of the 17th century. Although readers took his arguments seriously, few agreed with them. In 1663, for instance, the physician and philosopher Walter Charleton (1620–1707) rejected this Roman hypothesis, instead using King Charles II’s (1630–1685) recent restoration to the English throne as an opportunity to assert that the Vikings had built Stonehenge as a setting for crowning their kings.[1] The antiquary John Aubrey (1626–1697) also took issue with Jones’s assertions, piling up surveys, plans, drawings, and descriptions to prove that the monument was the work of the ancient British druids.

Modern historians regard Jones’s hypothesis with even more scepticism, characterising it as a throwback to the scholarly antiquarianism of the 16th century, dependent more on the evidence of ancient texts than direct encounters with the physical remains of the past. Kelsey Jackson Williams notes, for example, that Jones used Roman descriptions of the barbarity of the ancient Britons to eliminate the possibility that such people could have built a monument on the scale of Stonehenge. It is also true, as Williams and others have pointed out, that most of Jones’s representations of Stonehenge bore little resemblance to the ruins he had surveyed.[2] Let’s compare Jones’s plan of the monument – the first in a complete set of architectural drawings included in the Most Notable Antiquity – with one his two depictions of the monument as it had actually appeared: 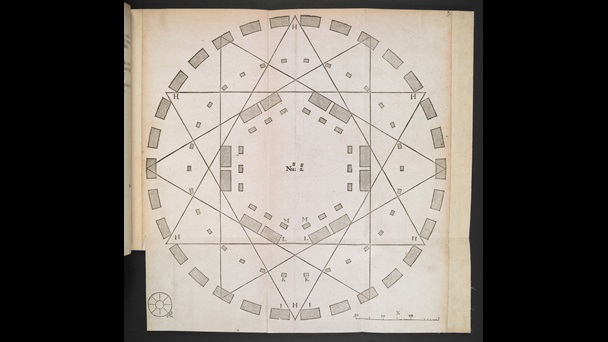 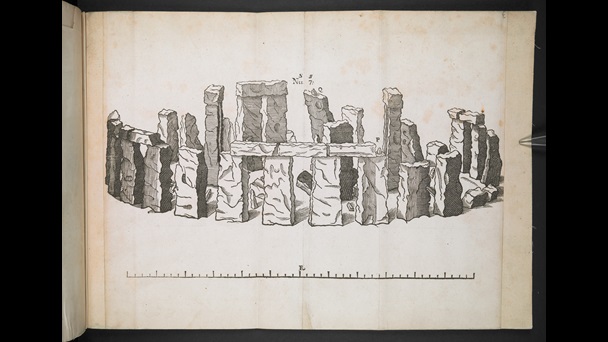 Jones and Webb’s representation of Stonehenge as it actually appeared.

Far from representing Stonehenge as it presented itself to the eyes, Jones’s architectural plan sought to recreate the monument as it had appeared when first built – 'in its pristine perfection.' The ruined and rough-hewn stones of Stonehenge, he asserted, had once been arranged symmetrically and with geometrical precision, forming two rings of concentric circles on the outside, and two rings of hexagons on the inside.[3] Comparing Jones’s orderly plan with his own impressions, Aubrey remarked that Jones had 'framed the monument to his own Hypothesis, which is much differing from the Thing it self.' Aubrey believed, in other words, that Jones had simply altered the true forms of Stonehenge to make them confirm his hypothesis that they had been planned with the geometrical precision and symmetry characteristic of Roman architecture.[4]

It was by no means true, however, that Jones and Webb preferred the authority of ancient histories to the physical evidence of the monument itself. Like all their contemporaries, the two architects made extensive use of the textual record. However, they explicitly rejected the notion that scholarly means alone could elucidate the meaning of Stonehenge. Instead, they sought to show that the representational practices of architecture provided far more powerful tools for interpreting the ruins of ancient buildings than the textual practices hitherto employed by historians and mythologists. Indeed, they presented architecture as a means of determining the meaning of Stonehenge with almost mathematical certainty, far surpassing the woolly conjectures of textual scholarship. 'Whosoever goes about to enforce other reasons,' they wrote, 'do as I conceive beat the air, neither can they reduce this Antiquity to any probable Originall.' Jones and Webb’s aim, therefore, was to demonstrate the power of architectural design, understood both as a set of tools for encoding meaning into buildings, and for later recovering that meaning from their ruins.[5]

It was with this aim in mind that Jones and Webb insisted on reducing Stonehenge to the series of architectural drawings starting with the plan, before moving on to the section and elevation. In the model of architectural design laid down by the Roman architect Vitruvius, and even more so for practitioners and theorists of classical architecture in the 16th and 17th centuries, the plan was the drawing through which architects expressed their first and most important ideas for a building. The diarist, philosopher, and gardener John Evelyn thus characterized the plan as 'the very first Design and Ordinance of a Work or Edifice, together with every partition and opening, drawn by Rule and Compass upon the Area or Floor.' Given its centrality to the design process, the plan was thought to furnish uniquely clear insights into the intentions of an architect, made unambiguously legible through symmetrical arrangements of geometrical forms. For Jones and Webb, therefore, obtaining Stonehenge’s plan was absolutely crucial to working out its meaning. Speculating that the monument had been designed by an architect working in the manner prescribed by Vitruvius, they believed that the plan would reveal insights inaccessible to those who used different forms of representation and interpretive strategies.

With their plan, Jones and Webb transformed Stonehenge into an object of architectural study, easily compared to other such objects. To prove their hypothesis, therefore, they simply needed to scour the history of Roman architecture for buildings based on the same plan, or something very similar. Turning to Vitruvius’s De Architectura they found two such buildings – the monopteros and the peripteros. Both of these structures were temples, surrounded not by walls but instead, like Stonehenge, by circular colonnades permitting access from all sides. To make their case, Jones and Webb superimposed the plan they had extrapolated from the ruins of Stonehenge onto a plan combining the features of the monopteros and peripteros. In passing, the two architects noted that neither of the Roman temples in question exhibited the hexagonal interior they had found in Stonehenge. They excused that difference, however, by proposing that the architect had added it 'to vary the invention' in a design otherwise faithfully derived from the plans of the monopteros and peripteros. 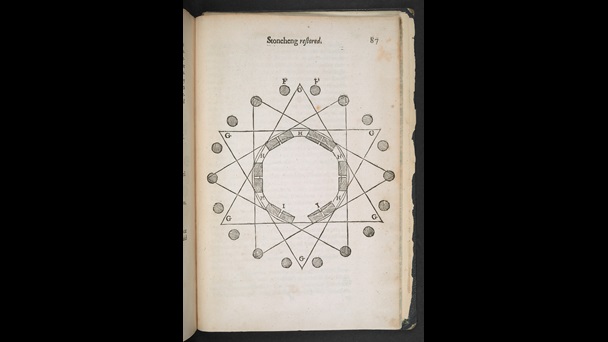 Here, Jones and Webb laid their plan of Stonehenge over the plans for both the monopteros and peripteros.

Claiming to have recreated the very same design the architect of Stonehenge had used to devise the monument, Jones and Webb positioned themselves to give a surprisingly precise account of the monument’s meaning. Reasoning from the absence of fixtures for a roof and the lack of an enclosing wall, along with the height and thickness of the structure’s massive columns, they concluded that Stonehenge had originally been designed as a temple to Caelus, the Roman God of the heavens. You can see what the two architects had in mind by looking at the final image they realised from their architectural drawings. 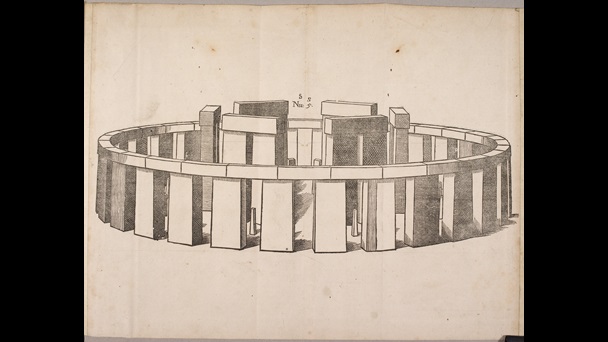 Jones and Webb’s depiction of what they thought Stonehenge looked like when the Romans first built it.

For Jones and Webb, the design of Stonehenge, open from above and on all sides, gave worshippers unmediated access to the heavens, and thus also to the God associated with them.[6]

The objection to this hypothesis, however, was obvious. Stonehenge may have been executed on a massive scale, but it did not exhibit the polish and refinement of Roman monumental architecture. Charleton remarked that the monument’s massive stones were too ‘rude, rough, craggy, and difform among themselves’ to be the work of a Roman designer.[7] Some thirty years later, the botanist John Ray (1627–1705) cast doubt on Jones’s hypothesis by making the same point: ‘I should with Inigo Jones firmly believe it to have been a Romane work, but that methinks it is too rude and impolished for their Architects.’[8] Jones and Webb, however, had a straightforward explanation for the monument’s present-day appearance. Over the many years since it had been built, Stonehenge had suffered a great deal of damage, coarsening its once polished columns, and displacing them from their original positions. It was no wonder, therefore, that the monument no longer quite exhibited the geometrical perfection intended by its first designer:

The stones of the greater Hexagon, and outward circle, after so long contest with the violence of time, and injury of weather, are for the most part standing at this day; […]. Those of the inner circle, and lesser Hexagon, not only exposed to the fury of all devouring Age, but the rage of men likewise, have been more subject to ruine. For, being of no extraordinary proportions, they might easily be beaten down, or digged up, and at pleasure made use of for other occasions. Which, I am the rather enduced to believe, because, since my first measuring the work, not one fragment of some of them standing, are now to be found.

Jones and Webb’s interpretation depended on an understanding of the long-term transformations to which ancient monuments and the landscapes around them were subject. If there had been significant changes in the short time between Jones’s two visits, it made sense to infer that far greater transformations had taken place since the monument’s construction some 1500 years earlier.[9]

For Jones and Webb, therefore, the key to understanding Stonehenge was to think about it as an architectural object –designed with the tools of classical architecture, and subject to the same processes of transformation observable in other ancient buildings. The result, from our point of view, was a circular argument. Jones and Webb justified their use of the architectural plan by arguing that Stonehenge was a Roman building, and that it could not have been designed by any other means. Likewise, they justified imposing hexagonal symmetry on the inner rank of stones by pointing out that a Roman architect could never have intended anything else. The lack of symmetry in the monument’s present-day appearance had to be explained, therefore, as an accident, resulting from arbitrary processes of decay and acts of despoliation.

Yet it would be a mistake to dismiss their interpretation out of hand. Although few accepted Jones and Webb’s Roman hypothesis, many of the monument’s later interpreters used similar strategies to work out its meaning. In the 18th century, for instance, the antiquarian William Stukeley (1687–1765) argued that the ancient British Druids were the descended from the Phoenicians. In turn, he suggested that the Phoenicians had inherited their wisdom – and indeed knowledge of true religion – from the ancient Jews. As a result, he could imagine Stonehenge as a work of architecture built by the Phoenicians for the worship of the same God known to Christians in his own day.[10] The architect John Wood the Elder (1704–1754), best known today for his elegant crescents of terraced housing in Bath, made these connections even more explicit in his histories of architecture and interpretations of Stonehenge. Indeed, he memorably argued that the Greeks and Romans had simply plagiarised the rules of architecture from the ancient Jews. Agreeing with Stukeley about the Phoenician origins of the Druids, he could thus argue that Stonehenge had been designed in a recognisably classical style, long before the Greeks and Romans set themselves to the putting up buildings in the same manner.[11] Like Jones and Webb, the 18th-century interpreters of Stonehenge sought to dignify the monument by imagining it as a work of classical architecture – or something very much like it. They believed that Stonehenge could only have been the work of people who understood the mathematical principles of classical architectural design.

[11] John Wood the Elder, The Origin of Building: or, the Plagiarism of the Heathens Detected. In Five Books. By John Wood, Architect (Bath, 1741).