Bill Shannon of the Cumberland and Westmorland Antiquarian and Archaeological Society offers an in depth analysis of a manuscript map in George III’s King’s Topographical Collection, exploring it as a unique record of place.

On the night of 16 December 1771, after what was said to have been the heaviest deluge for at least 200 years, Solway Moss burst. A slow-motion mud avalanche spread over some 400 acres of the surrounding area, overwhelming around a dozen farmsteads which had occupied the land between the Rivers Esk and Sark, formerly known as The Debatable Land, which at one time had been contested between England and Scotland. Like other mosslands, also known as raised mires or bogs, Solway Moss had been growing almost since the end of the last Ice Age, and now stood perhaps 50 feet higher than the surrounding farmland. Beneath a living surface of sphagnum, bog cotton, heather and some small shrubs interspersed with pools of water, there existed layer upon layer of compressed rotted vegetation known as peat, many yards deep. In summer, dry enough to graze cattle upon; in winter, the moss was a treacherous quagmire, dangerous to man and beast alike.

Indeed after the Battle of Solway Moss, fought between the English and Scots in November 1542, several hundred of the defeated Scots are believed to have drowned trying to flee across the moss. Even more dangerously, at times of exceptionally wet weather, the sodden peat could swell and swell until it burst. Bog bursts of this sort were rare, but not unknown in England: Pillng Moss near Lancaster had burst in 1744, while Chat Moss near Warrington had burst in the early 16th century – but the Solway Moss burst was the first to attract scientific enquiry – and media interest.

A report of the event, consisting of a letter from a Mr John Walker to the Earl of Bute was read to the Royal Society on 13 February 1772, and a sketch plan appeared in Philosophical Transactions for January 1772 (vol 62, pp.123–127), entitled ‘Irruption of Solway Moss’. This account and plan was reproduced in the Gentleman’s Magazine, the monthly digest of news and views, in June 1773, while a slightly different plan by T Bowen was published in the Gentleman’s Magazine for February 1779. However neither of these was as good as the map which had been sent to King George III early in 1772, entitled ‘A plan of the SOLWAY MOSS or FLOW/ With the adjacent Grounds taken by Eye in the/ Month of January 1772, by John Ainslie Surveyor’.

A plan of Solway Moss 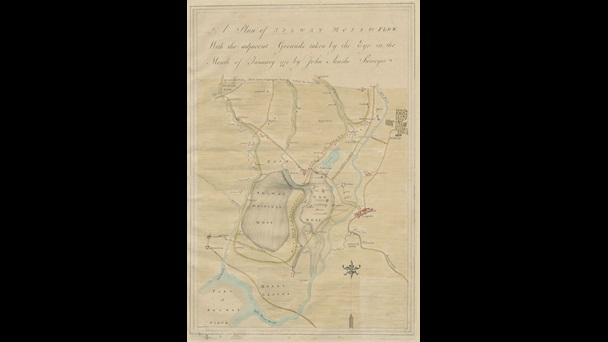 John Ainslie (1745–1828) was a Scottish surveyor, still in his 20s in 1772, and working for Thomas Jefferys, 'Geographer to King George III', on a series of English county maps. Ainslie had surveyed Buckinghamshire from 1766–68, and Yorkshire from 1767–70, before moving on to Cumberland, while Jefferys had also published a map of Westmorland in 1770 surveyed by himself, but had not at this date published his map of Cumberland. When the Cumberland map appeared in 1774, however, it was attributed to Thomas Donald, not to Ainslie; but it appears to have incorporated this aspect of Ainslie’s work in particular, noted as ‘Land Covered by the Moss 1771’ (See Maps K.Top.10.7).

Although not a scale map (‘taken by eye’), Ainslie’s map is equivalent to about three inches to the mile, and is a substantially finer and more detailed piece of work than the sketches which were to appear in Philosophical Transactions and the Gentleman’s Magazine. Whether it was made on Ainslie’s own initiative, or specially commissioned by Jefferys to be given to King George – or even commissioned by the King himself – is not known.

Ainslie’s map shows the ‘Old Bounds of the Moss’ and the ‘New Moss’, indicating all the properties affected by the bog burst, noting where the ‘Moss broak over the beck’ and ‘Where the Moss made its first Appearance’, close to a farm called Gape. Close by, Ainslie notes the flow was ’15 Feet Deep’ – and this is confirmed by the account in the Philosophical Transactions, which added that in places where there were hollows, the new moss was ‘full 30 feet deep’.

Ainslie’s map shows some dozen farmsteads nearby or within the flow, naming them as Dikestown, Pattonstown, Mirronstown, Gape, Lake, Henrystown, Collinstown, Clarkstown, Smallholmstown, Yadefauld, Peartree and Cargatehead. The Philosophical Transactions tells us that the inhabitants of all these ‘towns’ were surprised in their beds by the burst, and 35 families were dispossessed although no lives were lost. The houses generally stood on slightly higher, drier ground, but even so, ‘some of the houses were near totally covered, and others of them I saw standing in the moss, up to the thatch, the side walls being 8 feet high’. Considerable quantities of corn were lost, and some cattle, although John Walker in the Philosophical Transactions adds an account of a cow, one of eight in a cow shed, which was rescued after having stood for 60 hours up to its neck in mud and water. However, although a few of the above ‘town’ names survived to appear on the first edition Ordnance Survey map of 1864, the area covered by ‘the irruption’ never really recovered, and most of the overwhelmed farmsteads were never reoccupied. In 1915 HM Factory Gretna, a munitions factory was built on the site of the flow, and today it is part of Central Ammunition Depot (CAD) Longtown.

Ainslie’s map, however, does not just tell us about the irruption. It is also of particular interest in showing a detailed plan of the layout of Longtown at this date, drawing attention to the ‘Wine Cellar’ between the town and the Esk Bridge. The top (north-eastern) limit of the map is the ‘March between England and Scotland Called the Scotch Dike’, which had been erected after the 1552 treaty which had settled the Anglo-Scottish border: but a small triangle to the west is shown as being still in dispute between Mr Graham of Netherby and the Duke of Buccleugh.

Although most settlements are shown as red squares, a small number of the more significant buildings are shown by little profile drawings, including Kirkandrews church and tower, Netherby, and Arthuret church and parsonage. Two mills are marked, one south of Longtown and the New Mill on the Esk near Netherby.

In addition, the map gives us a vivid insight into the network of roads criss-crossing this land on the border between England and Scotland. Nothing like this detail survives on Donald’s one inch to the mile scale map of Cumberland (1774), nor indeed on any other map until the Ordnance Survey reached the area in 1864, publishing its six inch to the mile map soon after. Ainslie’s map therefore remains a unique record of a landscape which disappeared forever, one night in 1771.