On the 29 March 1764, the London Evening Post referred to the near departure of Lord Adam Gordon (about 1726–1801) and the 66th Regiment of Foot, who would sail from Cork the following month.[1] Between 1764 and 1765 Gordon travelled not only in the West Indies, where his regiment was stationed, but also in the American colonies and Canada, returning to New York to embark for Britain in September 1765.[2] Gordon has been identified by Newton D. Mereness as the author of the Journal of an Officer who travelled over a part of the West Indies and of North America in the course of 1764 and 1765. A copy of this journal 'in other than the author’s hand' has been preserved among the King’s Manuscripts’ in the British Library (Kings MS 213).[3] 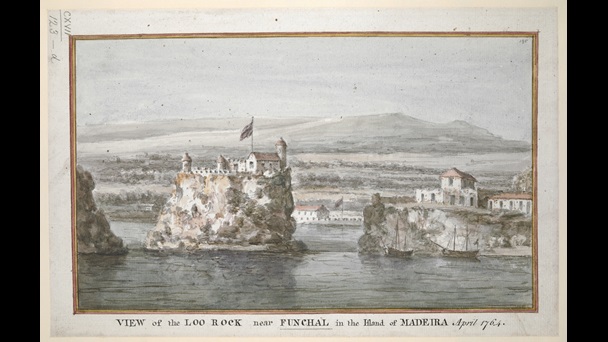 Scattered in five guard volumes of the King’s Topographical Collection there are two views of Madeira and 13 American views dated between April 1764 and September 1765. They are unsigned and, so far, they have been considered anonymous. They all seem to be by the same hand, have similar dimensions (about 21 x 30cm) and are lettered with title and date. The two earliest views are inscribed View of a Villa near Funchal in the Island of Madeira (Maps K.Top.117.123.c.) and View of the Loo Rock near Funchal in the Island of Madeira (Maps K.Top.117.123.d.), both dated April 1764. In his journal, Gordon wrote that, after leaving from Cowes on 15 April 1764, his ship ‘anchored in the Road of Funchal’ on the 30 April. He noted that ‘the situation of Funchal is extremely agreeable and Romantick’ and mentioned ‘the Loo Rock at the Westernmost end of the Beech’.4 He added that ‘almost every Man of any fortune, has a Villa at some little distance [of Funchal] […] and the appearance they make, being all Whitened and interspersed with Vineyards, Figtrees, and Groves of sweet Chestnuts […] is perfectly Romantick and Chinese’.[5]

The next view in the series, entitled View of a Cottage on the Island Massacre near the Mobille W. Florida (Maps K.Top.122.94.2.), is dated October 1764. In the Journal, Gordon wrote that ‘On the 12th of October 1764, I left the Tartar at anchor near Rose Island and Sailed in a small Schooner […] to the Southward for Mobile […]; next day we made Sail up the Bay, the River Poisson being to Starboard, and the Isle Dauphine, or Massacre, being on our Larboard Quarter’. He stayed there until the end of the month, visiting Fort Charlotte (Fort Conde) and making observations on the land, the access from the sea and the natural resources of the area. 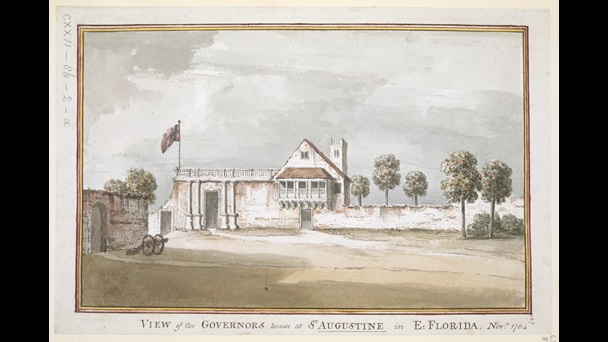 One of Gordon’s aims during his travels was surveying forts and fortifications in North America.[6] After Fort Conde, he travelled to Saint Augustine in East Florida, where he stayed with the Governor, fellow Scotsman James Grant of Ballindalloch (1720–1806). Both the View of the Governor’s house at St. Augustine in E. Florida (Maps K.Top.122.86.2.a.) and the View from the Governor’s Windows in St. Augustine E. Florida (Maps K.Top.122.86.2.b.) are dated November 1764. In his journal, Gordon wrote that he arrived in Saint Augustine on 19 November. After providing a brief description of the fort, he swiftly moved on to marvel at the copious fruits, the pleasant climate and the fertility of the soil. The two views he drew there duly show trees laden with large golden fruits, either the oranges or the pomegranates that he mentioned in the journal.7

On 28 November, Gordon left Saint Augustine and travelled to Georgia, ‘and on the 2nd of Decemr […], we came into Tiby road, which is the Entrance into Savannah River, passed three Miles higher up, and came to an Anchor off of Cockspur Fort’. The next two views in the series are entitled View of Tiby Light House at the Entrance of Savanna River Georgia (Maps K.Top.122.77.c.) and View of Cockspur Fort at the Entrance of Savanna River in Georgia (Maps K.Top.122.77.b.) and are dated December 1764. Although Gordon writes at length about his visit to Savannah, Charlestown, Beaufort and Georgetown, no other views in the collection document his journey through Georgia, where he stayed until March 1765, or North Carolina and Virginia, where he spent a month. Maryland, Pennsylvania, New Jersey and New York were next, but no views from this part of Gordon’s travels have been preserved either.

View of the Great Fall at Niagara 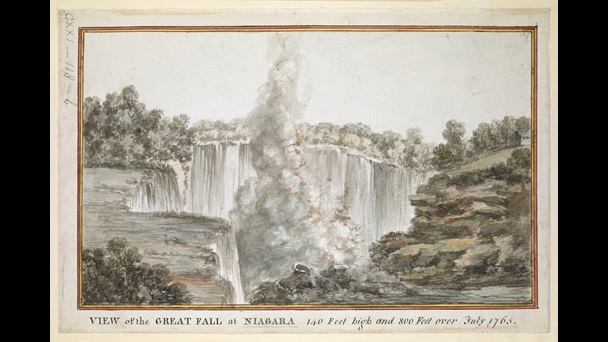 One of the earliest views of Niagara Falls, captured in July 1765

July 1765 is the date of two drawings of the ‘Magnificently Stupendous’ Niagara Falls, ‘which are almost as difficult to describe, as to represent their height – the breadth and quantity of water […] astonish and pleas[e] you’.[8]  Gordon devoted a long paragraph to them, adding that ‘I often visited these falls in June 1765, and every time, I beheld them with more Astonishment and Satisfaction’.[9] Gordon was probably staying in Fort Niagara, which he surveyed and described in July. On 5 July, he left for Oswegatchee and travelled along Saint Lawrence River, whose fortifications he inspected (Maps K.Top.121.78.2.).

In August, Gordon travelled to Quebec along Saint Lawrence River. From his ship, he saw ‘the pass of De Chambeau, […] from where our Vessels were fired at, from an occasional Fort, thrown up round the Church’, which appears in his View of De Chambaut on the River St Laurence above Quebec (Maps K.Top.119.43.7.).[10] In his notes about Quebec, Gordon recommended the reader to visit the locations associated with the Canadian campaign and the death of General James Wolfe six years before. They included the Montmorency Falls and ‘the two Lorettos’ (L’Ancienne-Lorette and Loretteville), represented in two views dated August 1765 (Maps K.Top.119.44.a. and Maps K.Top.119.43.8.). From Quebec, Gordon returned to New York via Boston, sketching his View of Bristol Neck from Trip’s in Rhode Island (Maps K.Top.120.44.) shortly before he arrived at his destination. He still had time to visit ‘Morisania, the Seat of Lewis Morris Esq., the prittiest [sic] and best conditioned Farm in America’, depicted in his View of Harlaem from Morisania in the Province of New York (Maps K.Top.121.45.2.) before embarking for Falmouth on 14 September.[11]

View of Harlaem from Morisania in the Province of New York 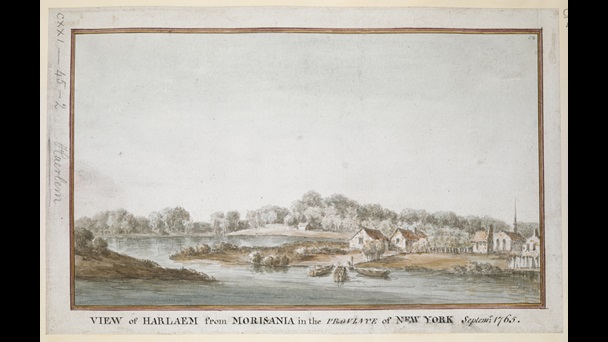 The relationship in terms of dating and subject matter between the 15 views in the King’s Topographical collection and Gordon’s journal is too close to be coincidental. The views certainly resulted from Gordon’s travels and they were produced to accompany his journal. They probably entered the collection at the same time as the clean copy of the journal but, at some point, the drawings became separated from the manuscript. They are all watercolours over graphite within red and yellow wash lines, below which the lettering has been carefully added. The draughtsman is interested mainly in the description of the land and no figures enliven his views, not even for the purposes of scale, although houses, fences, boats and bridges provide signs of habitation. Gordon, who joined the army when he was 15, would have had the necessary training to be the author of these drawings. Moreover, his journal evinces his sensitivity to the landscapes he saw in his travels, particularly to those he deemed ‘Romantic’ in the sense of ‘atmospheric'.

The connection between the journal and the drawings clarifies some aspects of the production of the views, while also raising further questions: why are there no views dated between December 1764 and July 1765 when Gordon was travelling from Georgia to Canada? In his journal, Georgia, North Carolina, Virginia, Maryland, Pennsylvania, New Jersey and New York receive as much attention and are described in as much detail as the locations he actually drew. Were these drawings made but not preserved?  Were they preserved but have not been found? Were these 15 views selected because the locations they depicted were not as well represented in George III’s collection as Boston, Philadelphia or New York?

On his return to Britain, the knowledge that Gordon had acquired in the course of his travels was soon put to use and his advice on American issues was valued throughout his political career. He had studied not only the fortifications he was supposed to survey, but also the population, the natural resources and the physical situation of the places he visited. Although these drawings were probably part of his studies, the observations he made in his journal suggest that they also reflect his personal interests and taste.

1 ‘Lord Adam Gordon goes to North America with his regiment, which is ordered to embark at Corke some time next month’ (London Evening Post, March 29–31, 1764, issue 5681). Gordon himself did not travel from Cork, but from London to Portsmouth and then to Cowes, where he embarked on 15 April.

3 Lord Adam Gordon, ‘Journal of an Officer who travelled in America and the West Indies in 1764 and 1765’ in Travels in the American Colonies, ed. by Newton D. Mereness (New York: The MacMillan Company, 1916), p. 368. All quotes are taken from the printed, rather than the manuscript, version of the journal.