Maps, guidebooks and topographical prints of London by the Bowles family

In the 18th century, a whole range of works catered to new arrivals in London. Alison O’Byrne explores how these works – including guidebooks, pocket maps, and views of the city – offered different kinds of topographical information to enable visitors to find their way through the streets of the capital.

Visitors to London were not new in this period; London’s position as a major commercial port ensured that foreign visitors regularly turned up in the capital. But from the early 18th century, map, print, and booksellers like the Bowles family began to offer an increasingly diverse range of materials that described the capital to new arrivals.

Over the course of the century, Thomas Bowles, his younger brother John, and, from the 1750s, John’s son Carington were major players in London’s print trade, specialising in prints aimed at a middling class of consumer, both in the capital and, through their network of links, in towns across the country and in Europe.[1] In amongst the diverse range of maps and topographical prints they sold were a number of items to serve tourists, both as aids in finding their way and to serve as souvenir items. The kinds of items they sold catering to strangers in the city, including guidebooks and pocket maps, are only just beginning to be replaced by the new technologies available in portable formats.

In the 17th century, pocket histories offered short, portable accounts of the capital to visitors. These works were often condensed versions of longer histories like John Stow’s Survey of London (1598) and frequently organised their material by types of buildings, including churches, monuments, and merchants’ companies. John and Thomas Bowles helped to pave the way for a new kind of guidebook to London, one that led its readers on a tour of the city’s key sites, when they published A New Guide to London in the 1720s.

Such guidebooks had been available in other European capitals for some time.[2] Fioravante Martinell’s Roma Ricercata (1644) organised Rome through a series of walks, while Germain Brice’s A New Description of Paris, first published in French in 1684 and then translated into English in 1687, offered to lead its readers ‘directly to such Sights as they most Fancie’. In order to do this, Brice explained, ‘I have taken the several Quarters and Streets in order, as far as possible, that so the several Remarks may be seen as they lye’; that is to say, each item covered appears in the text in the same order as it would be encountered on a walk.[3]

The first guidebook to do this for London was François Colsoni’s Guide de Londres (1693), a French language guide that organised visitors’ time through a series of five tours. A language teacher living in the capital, Colsoni (who was himself Italian) had a keen sense of what foreigners in London might like to know. When, in the 1720s, the copyright appears to have been acquired by the Bowles brothers and another bookseller, J. Smith, it was published under the title A New Guide to London (1726). This new edition included a parallel English-language translation, and also dispensed with the daily tours described by Colsoni. Instead, A New Guide offered readers a single circuit of the capital that they could begin and end as suited their itineraries. ‘We have not thought fit to make the Curious follow the Tours which the Author of the former Editions prescribed to them’, they explained, ‘but rather leave it to every one to see such Places as his Inclination or Affairs will permit’.[4]

One of the key benefits of organising a guidebook around a tour is that it helped visitors to find their way through the capital in a period before street names were posted at street corners (such signage did not begin to appear in London until the 1760s). A description that directed the reader’s movements (‘on the Left-hand you come to’; ‘Going out of this Palace towards the East, you find’; ‘Then going up this Street, you see before you’) ensured that he or she made their way from place to place.[5] Further assistance would have been available in the form of A Pocket Map of the Citties of London, Westminster, and Southwark (1725), also published by John and Thomas Bowles. The map’s pictorial representation of St. Paul’s in situ would have further helped its users to locate themselves in relation to the position of the cathedral, offering a point of orientation.

A pocket map of the citties of London, Westminster, & Southwark 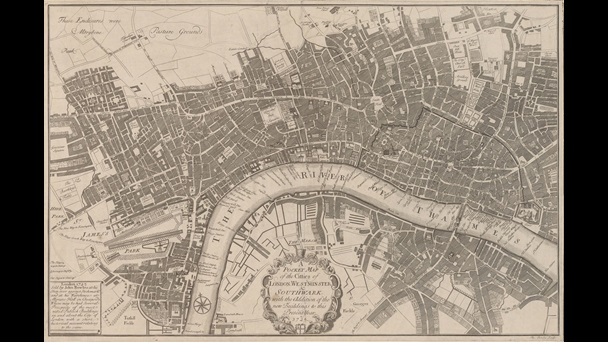 This map was designed as a conveniently sized navigational aid for Londoners and tourists visiting the City and boroughs of Westminster and Southwark.

The guide’s topographical itinerary was further reinforced in a collection of prints, Several Prospects of the most noted Publick Buildings in and about London (1724), which was advertised at the opening of the guidebook. The 23 views of the capital in the collection broadly follow the route of the accompanying guidebook’s tour, focusing on sites including St. James’s Palace, Westminster Abbey, St. Paul’s, the Royal Exchange, Christ’s Hospital, London Bridge, and the Tower of London. These might be purchased as a souvenir collection of a visit to London, or might serve as a replacement for a trip to London for those unable to travel. Such images were not exclusively aimed at visitors to London, though. Many inhabitants of the capital would have been interested in prints that offer a celebratory account of the public buildings of the city. 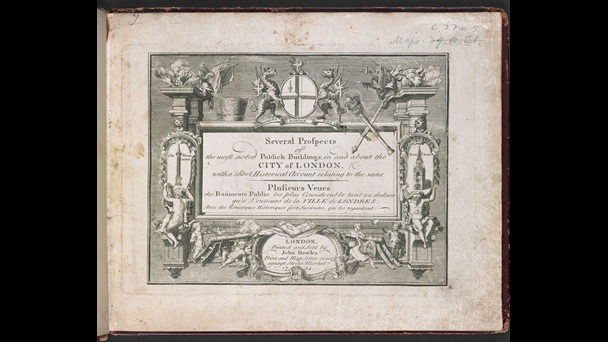 A New Guide to London also included tables of boat and coach rates in order to allow readers to calculate the cost of other forms of transportation across the capital. These various associated items – guidebooks, prints, maps, and tables of boat and coach rates – remained regular items produced by the Bowles family throughout the century. These were sometimes sold separately, and sometimes included with other items. Maps could be prepared for the pocket (by sewing it on to linen and presenting it in a slipcase) or even sewn into a guidebook. Tables of boat and coach rates might appear within a guidebook (as with A New Guide) or in street directories such as Bowles’s New London Guide and Hackney-Coach Directory (1786), an alphabetical listing of street names designed to help users locate streets by neighbourhood. 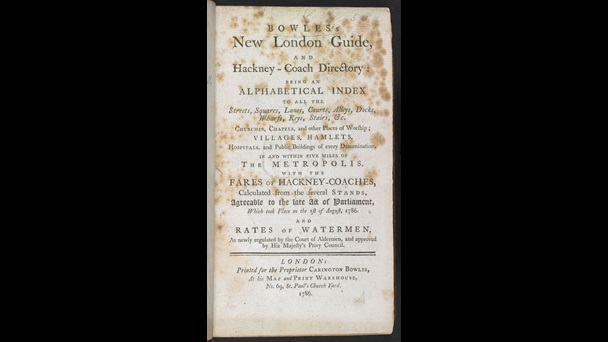 Carington Bowles's New London Guide was an early 'A to Z', intended both for locals and for visitors to the capital.

Rate tables also sometimes appeared on maps, as in The City Guide or a Pocket Map of London, Westminster and Southwark with the New Buildings to ye Year 1744 (1744). The fare calculations allowed visitors to budget for different kinds of transport that would allow them to travel further across the city.

The City Guide or a Pocket Map of London 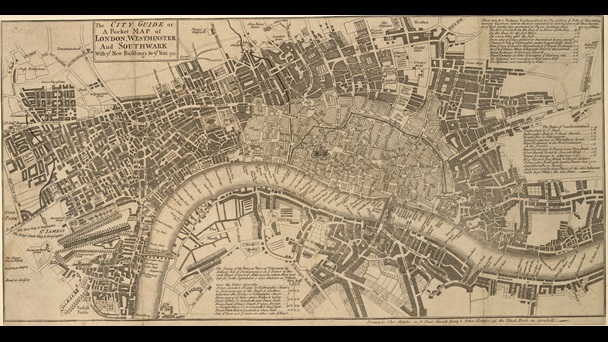 The new City Guide included a table of fares for Hackney Coaches and Thames Ferries.

Together, these items helped to shape the tourist and his or her itinerary. They presented a capital city to be understood not only through the historical accounts of individual buildings on offer in descriptive guides, but also through the series of views on offer in prints. These views were almost always from inaccessible points of view. 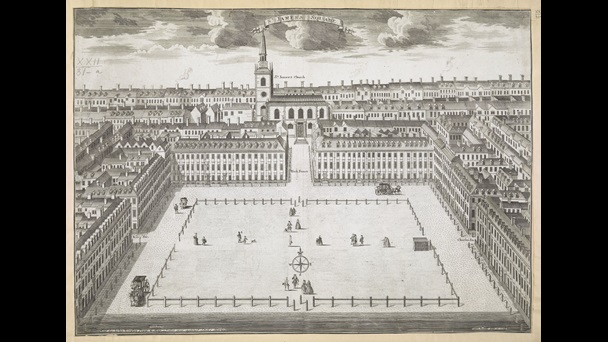 St James's Square is shown from an impossible viewpoint above the south side of the square, looking towards Christopher Wren's St James's, Piccadilly.

In Sutton Nicholls’s St. James’s Square (1728), the viewer is elevated to a bird’s eye perspective.

In The South East Prospect of Westminster (1750) a stretch of the city is viewed from the Thames, a busy but not overly crowded space that reminds viewers of the river’s central role in Britain’s commercial prosperity and martial power. 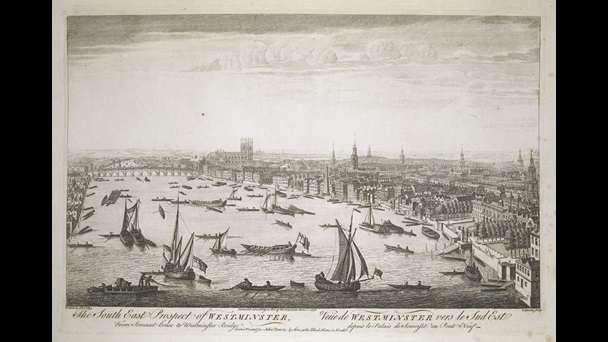 A prospect of Westminster from a viewpoint above the River Thames.

A Perspective View of Charing Cross (1740) shows one of the capital’s busiest intersections as a wide, uncongested thoroughfare sparsely populated with elegant pedestrians who faced no threat of mud or danger from the coaches passing nearby.

A Perspective View of Charing Cross King Charles I's statue has stood at this busy junction on the former site of an Eleanor Cross since 1675.

The range of topographical works sold by the Bowles family to 18th-century visitors to London gives us an insight into how tourists in that century might explore the capital, as well as a sense of the kinds of descriptions that shaped their experiences. There are occasional moments of criticism about the appearance of London, as when A New Guide warns readers ‘not [to] be surpriz’d’ if St. James’s Palace ‘does not answer the Magnificence of a Royal Palace’.[6] On the whole, however, these various items present an ordered and orderly capital for polite consumption, a fact reinforced in the presentation of sets of fine prints like Perspective Views in and about London in John Bowles and Son’s 1753 catalogue as ‘Being agreeable Furniture for the Curious’.[7]