While many artists were dispersing their energies over every corner of the country, there were others who became specialists in portraying particular areas: James Lambert, for instance, in Sussex; James Ross, a Worcester engraver with a nice line in prettily-posed scenes with a touch of caricature, in the neighbourhood of the Severn Valley; the Cromes in Norfolk; and William Green in the Lake District.

In keeping with a topographical tradition, William Green moved from surveying and map-making into landscape drawing, proclaiming as the purpose of his pictures ‘to save from the wreck of time and the busy hand of man’ the ‘mountain architecture’ of the Lake District, his adopted home after 1800. With the forthrightness of an indefatigably industrious Manchester surveyor having little time for the artistic licence of the picturesque school, he drew and painted the lakes just as he saw them. His rather sombre, still, realistic watercolours and aquatints promoted tourism throughout the Lake District and exploited the growing demands for souvenirs that it brought with it.

A View of the Bridge under Langdale Pikes, Westmoreland 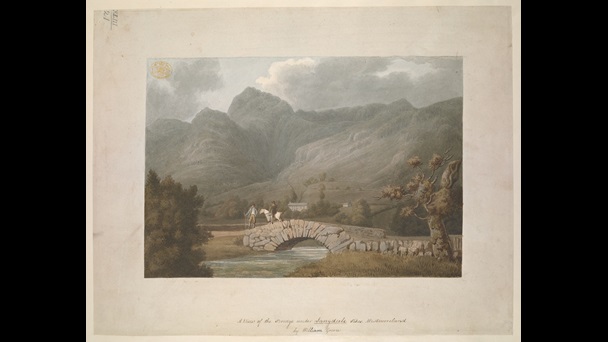 A placid scene in the Lake District, by William Green.

The Bavarian-born artist George Scharf settled in London in 1816 and proceeded to illustrate the social topography of the capital with charm, flair and affection. He was attracted by its busy street scenes and markets, the changing face of the buildings and the whole workaday life of the city. Many of these London drawings are now to be found in the British Museum’s Prints and Drawings department, but a smaller group of his work – some of them from the more personal albums of Scharf and his family – are among the delights of the department of Manuscripts.

On the River Thames, Bermondsey 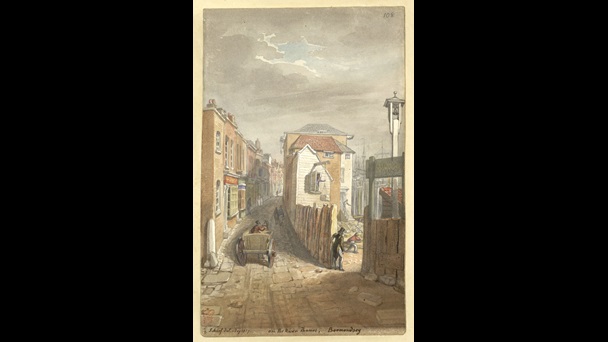 A London street scene by the Bavarian artist, George Scharf.

In the Yarmouth household of Dawson Turner, local topographical drawing was made something of a family business. A banker by profession, Turner had many cultivated interests – as botanist, classicist, collector of manuscripts, patron of the arts, and antiquary. One of his projects, the extra-illustration of Blomefield’s History of Norfolk with, among other pieces, some 4,000 drawings and 3,000 etchings, is now in the British Library. Many of the illustrations are by Turner’s wife and five daughters, but they also collected drawings by other Norfolk artists. John Sell Cotman was the family drawing master from 1811 to 1823 and Turner acknowledged his crucial influence in the work (‘Whatever merit may be found in this collection of drawings, is mainly attributable to him’) – although, rather surprisingly, actual examples of Cotman’s original work in it are few. It was Cotman’s own fondness for drawing architectural antiquities that largely inspired the scheme as a family project, and the results of his teaching are apparent throughout. Many of the drawings are slavish imitations, often direct copies, of Cotman’s work. The youngest Turner girls managed to develop, after Cotman had left them, a rather more individual style and the drawings of Mary Ann and Harriet are perhaps the pick, done with controlled, trim penwork and sometimes pretty colouring.

Over a period of 30 years the family worked to complete its visual record of Norfolk and its heritage. Visitors were always impressed by their industry. ‘Mrs Turner has been etching with her daughters in the parlour every morning this week at half past six!’ reported geologist Charles Lyell admiringly in 1817. Sir Frederic Madden, the British Museum’s Keeper of Manuscripts, however, upon first acquaintance in 1832, found the regime less congenial:

‘Mr T has 3 unmarried daughters at home, all of whom are extremely clever, and brought up in a systematic plan adopted by Mr Turner for getting up at 7 or earlier, breakfasting at 8, drawing or studying all day, teaching at schools, etc., dining at 5, and going to bed at 10. I confess, that the hours are very irksome to me…I am bored to death’.

Within four days, however, the doleful Madden found himself won over, and was half in love with Hannah Turner.

Interior of the Chancel of Burgh Church, Norfolk 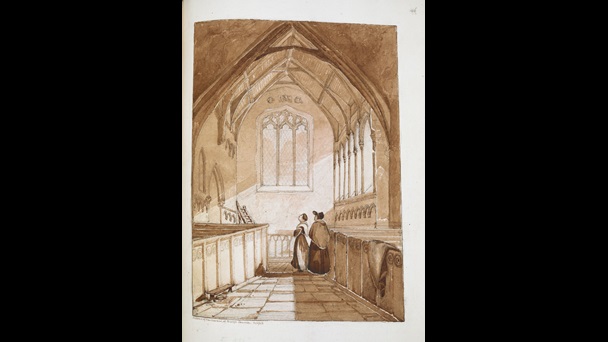 Dawson Turner's daughters contributed many drawings to Blomefield's History of Norfolk, including this one by Harriet Gunn (née Turner).