The printer and publisher John Nichols described Gough in a long tribute after his death as ‘the Father of British Topography’.[1] More recently scholars have recognised him as the leading antiquary of his day. Gough has been acknowledged as one of the first to argue for the preservation of historic buildings, a key figure in promoting the study of British medieval church architecture, the ‘founding father of the modern study of monumental brasses’ and one who raised the standards of architectural draughtsmanship. Gough was one of the first to recognise the importance of old maps in helping to understand the history of particular places and wrote a pioneering account of the development of British maps in the second edition of his British Topography (1780).[2] In addition, the topographical collection bequeathed by Gough to Oxford University in 1809 is one of the most important in the Bodleian Library, outstanding for the visual material received as well as the printed books and manuscripts. Among the maps is the earliest depiction of Britain in recognisable form (now known as the Gough Map) and large portions of the unique Sheldon tapestry map woven in the 1590s. 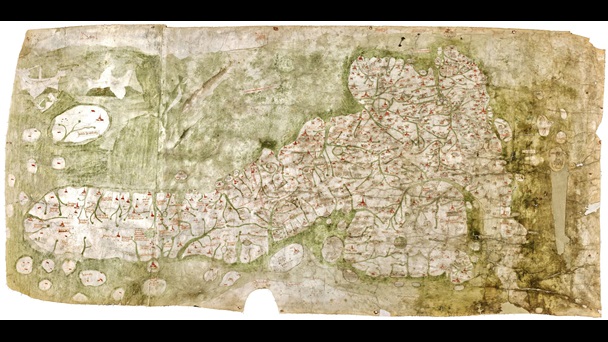 Acquired by Richard Gough in 1774, the Gough Map of the British Isles is justly famous as one of the earliest maps to depict Britain as a geographically recognisable island. Gough himself wrote that it is ‘in a style superior to any of the maps already described’.

Entering Cambridge University in 1753, the ‘venerable walls’ and associations with past antiquaries fostered his favourite pursuit, ‘the study of our national antiquities’. His Anecdotes of British Topography (1768) was the first comprehensive national bibliography of the subject and a remarkable achievement for one individual. It provided a gazetteer of sources relating to the local history and antiquities of each county, covering not just printed books and manuscripts but also maps and illustrations often with comments about dates, artists and when he acquired items. An enlarged second edition in two volumes was published in 1780 under the title of British Topography, and a third edition was in preparation at the time of his death. [3]

Gough was a gentleman of independent means with the time, the income and the determination to acquire as much as he could in his chosen field. He avoided fashionable and expensive purchases of fine art and sculpture, as well as foreign subjects, unless they related to Britain, and also literary or historical manuscripts. Instead, he concentrated on printed items, however minor, that related to particular places in the British Isles, the research notes of antiquaries and illustrations. These could be acquired relatively cheaply: the medieval Gough map for example cost him two shillings and sixpence; the Sheldon tapestry maps, a guinea.

His purchases at the immense auction sales in 1773 which followed the death of James West, former President of the Royal Society, provide an insight into his single-minded sense of purpose. These were important sales for Gough, as he described a few years later: ‘The library of the late James West, esq; which I was not so happy to have access to during his life, has furnished me with a rich accession of materials, and indeed put it into my power to form a small MUSEUM OF BRITISH TOPOGRAPHY, of which the foundations were before just laid’.[4] He bought 150 lots; the most expensive was four volumes of prints and drawings representing several hundred items for which he paid £47 and 14 shillings. In 1786, he made one of his most expensive purchases at the sale of the collections of Andrew C Ducarel, the former Lambeth Palace librarian, when he bought 10 volumes of prints and drawings relating to the history and antiquities of England for £62.

The painstaking work by the brothers Samuel and Nathaniel Buck in recording historic buildings was much admired by Gough. He obtained a large number of their prints and drawings including preliminary drawings of their Greenwich and Deptford views.

Concerned at the poverty in which Samuel Buck was left towards the end of his life, Gough supported him financially and successfully appealed to his friends to do the same. He also acquired over 200 drawings by Samuel H Grimm, the largest group of 143 being sketches on the spot for some of the Sussex series commissioned by Sir William Burrell. These provide additional information to the finished watercolours in the British Library such as exact dates when sites were visited and notes on the subjects.[5]

Among other drawings acquired by Gough are an important group by William Stukeley of Stonehenge and Avebury and many plans by the landscape gardener, William Bridgeman, as well as various architects and surveyors.[6]

A distinctive feature of Gough’s collections was the number of images which he commissioned, mostly with publication in mind, and the importance he placed on accurate engravings. As director of the Society of Antiquaries from 1771–1797, Gough was responsible for the society’s publications, in particular Vetusta Monumenta, the large format series of illustrations, and Archaeologia, the society’s new historical journal.

The best known of Gough’s own publications was Sepulchral monuments in Great Britain (1786, 1796). However, when looking for artists to illustrate it, Gough complained that it was especially difficult to obtain accurate drawings outside London and too few draughtsman had enough practice: ‘emulous of excelling in History, Portrait, or Landscape, they overlook the unprofitable, though not less tasteful, walk of Antiquity.’

The Cambridge scholar and highly competent amateur artist, Thomas Kerrich, urged him to obtain ‘painful exactness’ of the object being copied: ‘all attempts of the artist, either the designer or the engraver, to show his own abilities, are impertinent’.[7] Gough believed that the Society of Antiquaries’ engraver, James Basire, had the necessary skills and for over 20 years from 1773, Gough employed him to make hundreds of engravings and occasional drawings. The 400 copper-plates bequeathed to the Bodleian, with a few exceptions, were produced in his workshop.

It has been suggested that the preliminary drawings for the Westminster Abbey series may have been drawn by Basire’s most famous apprentice, William Blake, although Blake had left by the time they were engraved.[8] Producing so many engravings was a lengthy and costly business; it was estimated that Basire was paid about £2,200 for the 131 plates published in 1796 in volume two alone.

In 1792 the Society issued guidelines for artists measuring and drawing ancient buildings.[9] In following this policy of accurate representation, Gough’s Sepulchral Monuments and the Society of Antiquaries series of measured drawings of cathedrals provided valuable sources for scholars and encouraged the study of medieval art and architecture, but with such a high cost of production and a limited market, such publications could not be produced commercially.

Some of the drawings for the first volume of Sepulchral Monuments were provided by his Cambridge colleagues such as Michael Tyson and Thomas Kerrich, both exceptionally able amateur artists. However Gough came increasingly to rely on two professional draughtsmen who had gained a considerable understanding of medieval architecture and could provide the exact illustrations of monuments that he required. John Carter first impressed him with his drawing of the west front of Croyland Abbey in 1780, and was regularly employed after this throughout Gough’s lifetime. Gough gave him detailed instructions about where to go, what to draw and who to see to gain access. Over 50 of his drawings were used in Sepulchral Monuments, and he was given substantial commissions to record in detail Dorchester Abbey and St Alban’s Cathedral. Carter was recognised as one of the best architectural draughtsmen of the time and many other drawings by him found their way into Gough’s collections.[10]

Jacob Schnebbelie was another draughtsman who was highly regarded by Gough and supplied him with numerous drawings in the course of about five years before the artist’s early death in 1792. Correspondence between them shows Schnebbelie working for Gough in one year, 1788, in London, Rochester (Kent), Winchester (Hants), Salisbury (Wiltshire), Wimborne (Dorset), Wells (Somerset) and St. Alban’s (Hertfordshire). The following year Schnebbelie was sent back to Salisbury to record the wall-paintings in the ceiling of the choir which were about to be whitewashed over in a highly controversial ‘restoration’ programme. Gough did not allow class distinctions to prevent him paying a handsome tribute to the work of his draughtsman when other contemporaries would have regarded him as a servant: ‘I lament his mild and modest manners, his ready eye and expressive hand’. They visited many churches together and Gough said they learnt from each other.[11]

As a result of Gough’s single-minded sense of purpose, his acquisitions were second in their field only those of King George III, which the British Museum received in 1828. Unlike the King’s Topographical Collection, Gough’s was focused on places and historical monuments in the British Isles, rather than worldwide.[12] Over 4000 volumes were received by the university, but this fails to reflect the large numbers of individual maps, prints and drawings sent in packing cases from Gough’s house in Enfield. These are now divided up into over 60 guardbooks and portfolios as well as numerous separate items. Tracing particular illustrations is by no means easy as only the maps and printed books are included on the Bodleian’s online catalogue; most of the rest are recorded on a 19th-century manuscript handlist (R. Ref. 756) arranged by county with the briefest of details.[13]

[3] Richard Gough, British Topography. Or, an Historical Account of what has been done for Illustrating the Topographical Antiquities of Great Britain and Ireland, London, J. Nichols and T. Payne, 1780. The completed part of the 3rd edition was destroyed in 1808 by a fire in Nichol’s printing works. However the Bodleian has a copy of the 2nd edition with useful later additions by Gough (Gough Gen.Top. 363–5).

[9] Henry Englefield, and Joseph Windham, Report on the Proper Methods of Measuring and Drawing Antient Buildings, London, Society of Antiquaries, 1792.

[13] The most useful guide to Gough’s topographical drawings is Maurice Barley, A Guide to British Topographical Collections, [London], Council for British Archaeology, 1974, pp. 95–8.