Samuel and Nathaniel Buck – Past and present in the national landscape

Samuel Buck (1696–1779) and his brother Nathaniel (active 1724–59) published two major series of engraved views of England and Wales: 81 prospects of towns (1728–53) and views of over 400 antiquities – ruined castles, abbeys and the like (1726–42). These constitute the most significant print series produced in Britain in the first half of the 18th century. Taken as a whole, the engravings represent the nation’s improving present condition along with the relics of its past.

Britain was, in effect, a newly created state, born out of the Union of the Scottish and English Parliaments in 1707. The political centre of gravity however, was England – a probable reason for why the Bucks did not venture into Scotland. The new country had been recognised as a world power by the Treaty of Utrecht of 1713, following the War of the Spanish Succession.

Britain’s official self-image was Protestant, prosperous and liberty-loving, a contrast to Catholic and absolutist Spain and France. In this respect, Britain strongly resembled the Dutch Republic, where in 1609 Claes Janszoon Visscher had produced a map of the United Provinces that included topographical views of the most important towns. Viewed together, these towns made manifest the prosperous Dutch nation, as the Bucks’ series of town views was to do for England and Wales.

Yet the Bucks’ choice of and approach to their subjects was also necessarily informed by the English tradition of antiquarianism, which since the 16th century had focused on what had been lost to the ravages of modernity. The antiquary William Dugdale had condemned not only Henry VIII's destruction of the monasteries, but the iconoclasm of the Puritans during the mid-17th century civil wars. The violent break between the modern country and its past, however, impelled endeavours to represent both past and present as existing in a framework of spatial continuity provided by the national landscape itself. Meanwhile, the continuity in time, that was otherwise so lacking, would be made up for by the cumulative narrative based on the observations of the writer or draughtsman moving through this landscape. Daniel Defoe wrote in his tour of Britain (1724–26) that the country offered a ‘flowing variety of materials’ that was both ‘instructing and diverting’.

We see this ‘flowing variety’ in the work of the Bucks. The two main types of subject matter, antiquities and towns, tended to overlap and complement each other – as, to an extent, did the subscribers to the views. An identifiable and fairly large minority of the subscribers – both aristocrats and commoners, landed gentlemen and well-off professionals and tradespeople – subscribed to both series. This highlights that their works spoke to the mixed nature of the British elite and its political and cultural outlook, which was traversed by both modernising and nostalgic impulses.

It is noticeable, however, that judging by the surviving lists of names, more urbanites than landed gentlemen seem to subscribe to the town views, and more often to particular sets, rather than the whole series. Urban middle-class confidence in claiming a visual stake in the national territory and its past was in its early stages of development; thus it was the patronage of the aristocracy and gentry that dominated both antiquarian studies and the making of engraved views in general. However, the trend was towards a broadening of participation.

An early supporter of Samuel Buck in his native Yorkshire was the antiquarian and map publisher John Warburton, who, in his later position at the College of Arms, was accused of ascribing coats of arms to ‘Persons who have no right to them’. Warburton replied by stating that his intention was ‘to obviate that symbolical or heraldrical Mystery… that Trade and Gentility are incompatible’. Nonetheless, Warburton was able to put Buck in contact with powerful landowners such as Richard Boyle, the Earl of Burlington. In 1721–22, both Warburton and another well-known antiquary, Ralph Thoresby, encouraged Samuel to publish his first views, which were not of antiquities, but of Yorkshire towns, including Leeds – already a centre of woollen manufacturing.

Before long, Buck had been introduced to William Stukeley, in London, and secured the support of the new Society of Antiquaries for his project of engraving views of antiquities. Sets of 24 views were to appear annually from 1726 to 1742. Yet the Society was also interested in depictions of towns. Stukeley, its leading light, wished to describe both older and newer elements in the national landscape ‘in the natural order and manner they presented themselves’.  In this, he is not so far from the ‘flowing variety’ of Defoe, the voice of commerce and ‘improvement’. The Bucks accordingly published their first set of towns in 1728.

The connection between modern commerce and antiquarianism is shown in the set of views of Lincolnshire and Nottinghamshire antiquities, published in 1727. Stukeley had encouraged Samuel Buck to take views of Lincolnshire, now his place of residence. He was active in the antiquarian society in Spalding, a town which had grown prosperous with the conversion of the marshy fenland into rich agricultural land. One of Buck's plates is dedicated to the Spalding Society, and names of their members figure among the sets’ subscribers. In the North East View of Louth Park Abbey, near Louth, in the County of Lincoln, the abbey’s remains form a decaying foreground to the view of Louth, which, the caption informs us, is a ‘well Built, Rich, Populous, & Pleasant Market Town’. 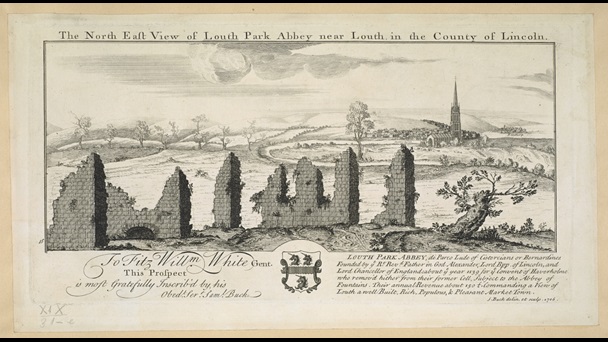 Founded in 1139, the Cistercian Louth Park Abbey fell into ruin after the Dissolution of the Monasteries

In a similar way, the view of Wetheral Priory, Cumberland (1739) contrasts the gatehouse of the priory dissolved by Henry VIII’s commissioners with the modern gardens of Corby Castle across the river Eden. In addition to the Baroque cascade (to the left), the classical forms of the neo-Palladian garden temple to the right form a small but emphatic counterpoint to the dark, blocky shape of the 15th-century gatehouse. On estates such as Thomas Robinson’s Rokeby Hall, in Yorkshire, medieval remains were likewise meant to be viewed in relation to new garden improvements. Robinson, along with the above mentioned Earl of Burlington, was one of several proponents of neo-Palladianism who subscribed to the Bucks’ antiquities series. The taste of modern, improving landowners could allow a limited role to the monastic and feudal past, now demonstrably superseded.

The west view of Wetherall-Priory, in the county of Cumberland 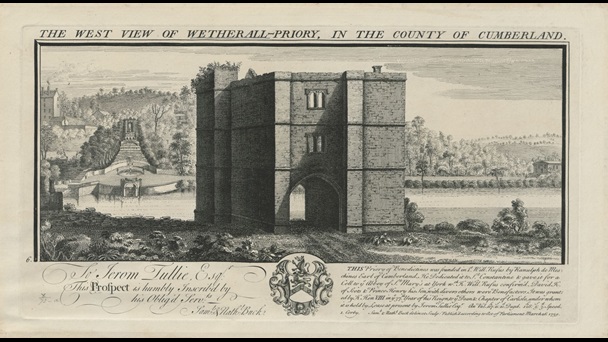 In the above examples, the antiquities remain rather brutally unintegrated into their setting, as dark, pre-modern remains. Yet where the setting itself was wild and unimproved, a real integration between ruin and landscape could be asserted. Such is the case with Dolbadarn Castle, North Wales, shown in the last set of antiquities of 1742.

The west view of Dolbadern Castle, in the county of Caernarvon 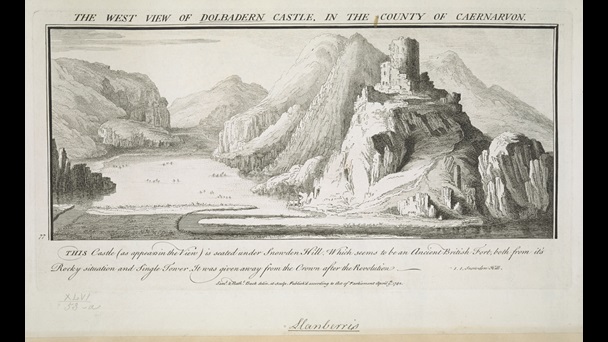 Built by Llywelyn the Great in the early 13th century, Dolbadarn Castle was strategically important, controlling the Llanberis Pass

This is the first known image of what was to become a famous picturesque site later in the century, but it is an early sign of a wider shift towards seeing the national landscape in this way. The following year saw the publication by Thomas Smith of Derby of his views of the Derbyshire Peak District. Already, in 1734, Alexander Pope had described the rocks and river at Clifton, near Bristol, as filling the eye like the ‘broken Scenes behind one another in a Playhouse’. Here, a sophisticated urban outlook takes pleasure in the unusually disordered and overwhelming aspects of the site, but also keeps it at bay by likening it to a stage set, indeed, to scenery. At the same time, in this image, the medieval Welsh castle, by being described as ‘an ancient British fort’ is both celebrated for its Celtic particularity and incorporated into a mythic narrative about the long historical duration of the then-recently founded British nation.

The Bucks’ prospects of towns show a parallel development. The picturing of Britain becomes more redolent of the imaginative control exercised by the cultured tourist rather than the viewpoint of the surveyor or mapmaker.

In the early sets towns are represented as orderly and ‘neat’ (the latter a favourite adjective of travellers), with key buildings carefully indexed. The view of Derby actually shows the first fully merchanised factory in Britain, Lombe’s silk works, but it is simply depicted and indexed among other civic and commercial establishments. This is ‘industry’ in the sense of pleasing ‘industriousness’, not the sublime horror evoked in William Blake’s image of ‘dark Satanic Mills’.

Here, then, a balance is maintained between ‘trade’ and ‘gentility’, to use Warburton’s terms. There are no views, for example, concentrating on the important industrial centres of Whitehaven, in Cumberland, or on smoky Shields, in County Durham. In Somerset, major centres of manufacture such as Taunton are omitted in favour of Wells, a very small town which was an ancient cathedral city and hence of antiquarian interest.

The South East and North West prospects of Bristol 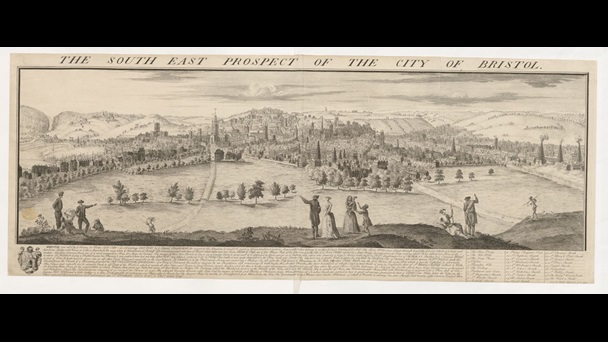 Bristol, by the early 18th century, had established itself as the most important trading city in England, after London

In the two 1734 prospects of Bristol, however, we see a shift away from mere ‘neatness’. Then the biggest town in Britain after London, the city appears here in large part as a distinct landscape in itself. Bristol’s status as a port here allows it autonomy from the landed setting and genteel associations of many inland towns. In the engravings, likely from the drawings of Thomas Rosse, the town is not simply a collection of individual, indexed buildings, but a sprawling mass, with variations in tone and clarity; meanwhile, specific features are dramatised and highlighted. Pope (again), visiting the city in 1739, described it ‘as unlike any Scene you ever saw’. In the whole series, this is the most extensive and vivid depiction of a town’s industrial and trading activities – shipping, glasshouses and tobacco and sugar refineries, all explicitly – and cruelly – linked to the town’s key role in the slave trade. In the foreground of the South-East Prospect, a gentleman points to the crowded masts of ships, while his offspring seems to take fright at the appearance of the young enslaved African servant who accompanies the family.

Even in this view, however, the coal smoke disperses quickly and tidily, ensuring the viewer’s visual and imaginative possession of the scene and avoiding associations of ill health and manual labour. In the later sets, towns are depicted in a different, much more fluid and elegant style, associated with the precise draughtsmanship of the French team of Hubert Gravelot, Charles Grignion and Jean Baptiste Claude Chatelain. This was a style seemingly ideally suited to smaller, genteel towns such as Lincoln: in the prospect of 1743, its cathedral and churches are shown framed by trees, fields and meadows, with well-dressed folk strolling in the foreground.

The South West Prospect of the City of Lincoln 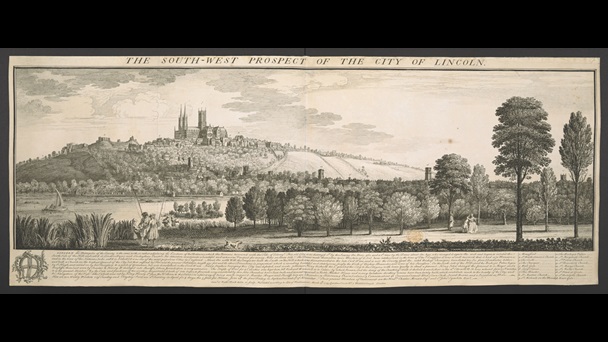 In the first half of the 18th century, though still a quiet market town, Lincoln was growing and modernising

Yet in the famous five-sheet prospect of London published in 1749, the immense metropolis likewise appears as clean, orderly and smoke-free; the less respectable south bank and eastern suburbs are omitted.

Over three decades, the Bucks’ two series negotiated for their audiences new ways of viewing localities in terms of a coherent national framework, where the ruinous past was admitted into the improving present; where older-landed property was balanced by and intermingled with new commercial wealth; where even marginal regions such as North Wales could be viewed within the framework of the wider, London-dominated, British polity as providing evidence of an ‘ancient’ common identity.