Taken from the road: Peter Tillemans in Northamptonshire

A group of drawings in the British Library’s Manuscripts collection tell the story of Peter Tillemans’ work for the antiquary John Bridges. Touring Northamptonshire with Bridges in the summer of 1721, the drawings depict the county’s contemporary topography and rich antiquarian history. John Bonehill explores further.

The beginning of a journey

In late July 1718, Peter Tillemans made the first of several journeys into the East Midlands, travelling from his Westminster base to a small manor house, just outside of Kettering, in Northamptonshire. It was the home of the antiquary John Bridges, who had commissioned the artist to illustrate a projected history of the county he was writing.

On a guinea a day and staying at his patron’s home at Barton Seagrave, Tillemans would accompany Bridges and others he had employed on the project on numerous site visits to local churches, country houses, villages and towns. Over three of the next four summers, they would travel many hundreds of miles, their itinerary at times taking them to three or more different locations in a day.

Travelling by carriage in the main or sometimes on horseback, along the often rutted, ill-maintained roads of the day, this was some feat. They were a remarkably industrious team, however. While Bridges compiled volumes of notes and observations, his artist would make sketches, producing over 200 drawings in what was observed as ‘a slight, but masterly manner’.[1]

With Bridges passing away before he was able even to begin editing this mass of material, however, it all went unpublished. Over time, Bridges’ collections were broken up; with his field notes and research diaries going to the University of Oxford and Tillemans’ drawings finding their way to the British Library.

Though some drawings are now lost, the collection still conveys the extraordinary scope of Bridges’s enterprise and interests and Tillemans’ ability to give them pictorial form. There are studies after antiquities and works of art in local collections as well as drawings of architectural or sculptural landmarks. But the artist was also called upon to address a varied range of scenery; a changing landscape, at once modern and historic.

Taking to the roads of Northamptonshire, Tillemans was able to adopt many points of view on the dramatic transformation of the country he travelled, its gains and, at times, its losses.

A Flemish-born economic migrant settled in London, travel was a defining feature of Tillemans’s art and biography.[2] Journeys to patrons' estates were essential to the business of many artists, but Tillemans’ travels took him further than most.

Such was the geographical spread of commissions, his art would address arguably a wider range of local landscapes than that of any artist at work in England before major changes in travel and transport around the middle of the century opened the country up to others.

Route-ways of various kinds – avenues, walks, paths, tracks, roads and rivers – feature in the drawings Tillemans made for Bridges as subject-matter and as vantage point. Serving as compositional devices, uniting elements of a scene, they were a common feature of landscape art. Yet, Tillemans was also attentive to how route-ways structure the landscape, how they were used and to what ends. 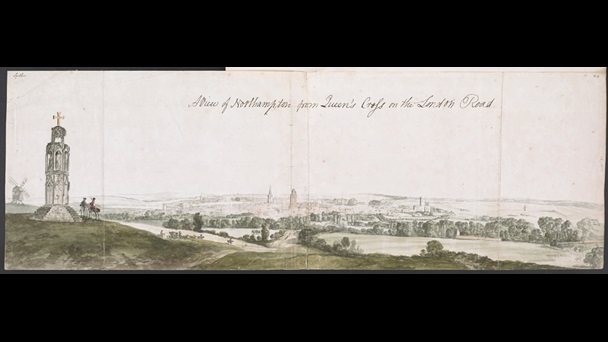 Two antiquarians inspect an Eleanor Cross in this view of Northampton, taken from Delapré Park

Travelling with Bridges in 1721, Tillemans made several fine drawings, in pencil, pen and ink, of the town of Northampton. They are explicitly titled as ‘taken from the road’ in the lengthy inscriptions below the images, which will also identify particular buildings, almost as a set of co-ordinates.

Taken together, the drawings survey the county town from a series of shifting perspectives and compass points. These were precisely selected viewpoints, of significance to the meaning as well as the making of the scene.

Standing above the town, the Eleanor Cross made for a suitably grand vantage-point for the artist’s view of Northampton from the south. Erected by Edward I in memory of Eleanor of Castille, it was one of a series of now largely lost medieval royal monuments. Marking stages along the route that returned the body of his Queen to London, the cross was a major county and wider regional landmark, affiliating the eastern shires with the country’s royal past.

Taking up a vantage-point a little above the monument, Tillemans stood on land of further historic significance. Before the Dissolution it had been monastic land, but was now the private estate of Delapré Park and in the hands of the Tate family. Such a concern with the place of the past in what was a rapidly changing landscape is in some ways central to the artist’s characterisation of the townscape below.

South West Prospect of the Town of Northamptonshire 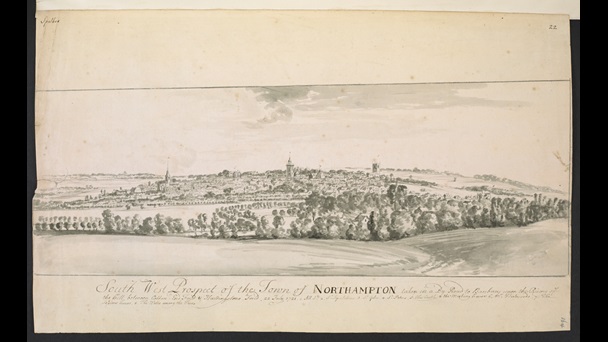 This view, produced on 22 July 1721, shows Northampton from the south west

It is a wide-angled view in the tradition of the town prospect; a long-lived genre of landscape art celebrating civic pride and commercial prosperity.

Indeed, the Midlands town occupies an appropriately rich and plentiful valley landscape, with the urban environment bordered by gardens, orchards and well-wooded parkland. On the ground, Tillemans’ central line of sight, taking the eye out towards the town, is along the path of the London road travelled by a coach and outriders. Beyond its compositional role in unifying foreground and middle-ground, the road in some ways defines the character of this landscape.

What had enabled Northampton’s present good fortune, for one contemporary, was the ‘considerable Advantage to it’ afforded by ‘the North-Western and Northern Roads, that now lead through this Town’. Despite there being ‘no Commerce by a Navigable River’, the town had become both ‘Populous and Rich’.[3] Many of the county’s roads remained in a shabby state of repair, virtually cutting off some centres from the prosperity that other places were now enjoying.

Thanks to a handful of new turnpike (or toll) schemes, larger settlements like Northampton were now better able to trade with lucrative London markets. In this sense, the road and the movement of traffic along it in Tillemans’ view alludes to the town’s connections to places elsewhere. They gesture to its position in a larger commercial and social network of regional and national scope.

A view of the country about Northampton 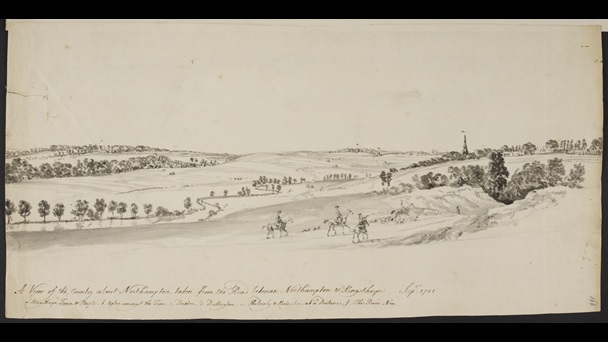 The Western View of the Town of Northampton 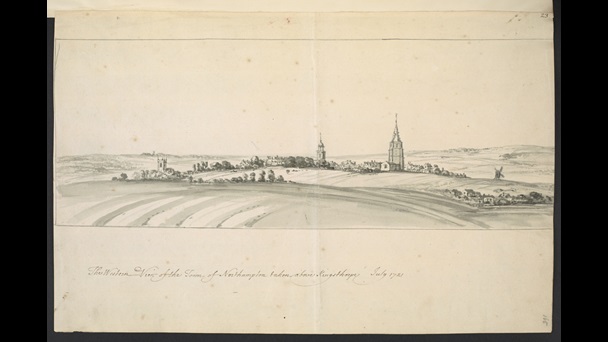 What was being laid out here was as much a story of recovery as progress. Over the previous half century or so, Northampton had been greatly reduced twice. On the Restoration, it had been slighted and its historic fortress all but razed to the ground on the order of the Crown, in reprisal for its people and the regional population more generally having sided with Parliament during the civil wars. In 1675, Northampton had suffered further devastation when a catastrophic fire ‘desolated and consum’d almost the whole Town’.

What Tillemans surveyed was a town now ‘re-edified and nobly improved’.[4] Some had profited from these events. Buying up the ruined castle site, the enterprising Robert Haselrig had sold off some of the stone to local mason-builders to finance a row of fine town houses. They are picked out in minute detail in Tillemans’drawing, just to the west of the urban centre, running along the lines of what had been defensive trenches.

Others viewed the fire as an opportunity to re-establish the town’s historic but latterly broken royal affiliations. At dead centre in Tillemans’ drawing lies the elegant new Allhallows Church, the centrepiece of Northampton’s redevelopment. Built in conscious emulation of Sir Christopher Wren’s city church designs for London, it established a parallel between the Great Fires that had engulfed the town and the capital, and the rebuilding that followed. Sensing an opportunity to assuage local resentments over the restored monarchy’s earlier acts of retribution, Charles II had made available royal forest timber for the build. These associations were affirmed by the iconography of the church’s western portico, where a sculptural effigy of the king in antique military dress was raised, recalling the imagery of Charles II as Augustus presiding over the rebuilding of the capital on the pediment of London’s Monument to the Great Fire. 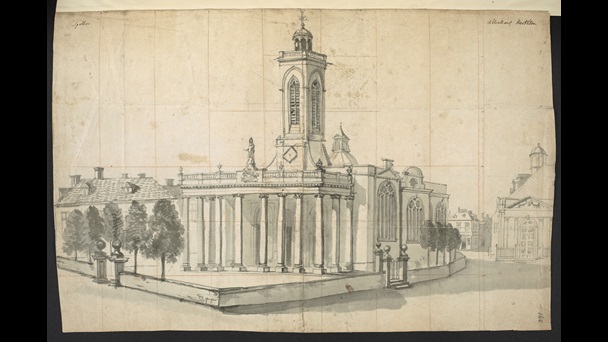 The new All Hallows (All Saints) Church in Northampton was re-opened in 1701, following a devastating town fire in 1675

It is a narrative that unfolds architecturally in Tillemans’ drawing, as the royal memorial of the foreground connects visually with a series of other lofty structures; the post-mill that shares its high ground and the cupolas, pinnacles, towers and spires of the churches and civic buildings that punctuate the town skyline. These sight lines out from the cross would seem calculated to prompt reflection on these landmarks, as signs of historic continuity and discontinuity, connection and disconnection in the landscape.

Like so much prospect art, it is a drawing about the act of viewing as much as anything else. When considered as part of a series of views, the concern also seems to be with how that experience is being shaped by movement through the landscape. Besides the inscriptions, Tillemans would employ various pictorial devices to convey this sense of changing viewpoints and the role of observation in making the scene. Beyond his own implied presence outside the frame, surveying the scene, he would add figures making notes or sketching. In the view of Northampton from the south, the historic roadside cenotaph is examined by passing riders, who we might imagine to be members of the draughtsman’s party.

Sometimes, in the drawings Tillemans made for Bridges, architectural details and the lie of the land are treated rather sketchily. There are signs that they were done in haste, perhaps as the demands of a day’s schedule of site visits meant that time was limited. Others, like the view of Northampton from the south, are more finished. Worked up from on site studies, in the comfort of Bridges’ Barton Seagrave, the artist would take greater care in framing up the scene, adding the figures and fine detail, readying them for engraving.

Drawings like the prospects of Northampton demonstrate considerable artistry. They are a deft mix of controlled pen lines and delicate washes contrasted with hastier, near scrawled mark-making and more loosely brushed passages. In the western view of Northampton, ‘taken above Kingsthorpe’, the cultivated fields that served the town are brushed in with great economy, while the church spires glimpsed above the rising land are by contrast picked out with meticulous care. Such drawings are no less accomplished compositionally, the artist employing a range of formats to display the changing landscape encountered along the road and his shifting vantage points. Landscape drawing is in Tillemans’ hands not only an appropriate way of recording these changes, but a means to take their measure.

[1] Sir John Cullum, letter to Richard Gough, 1 January 1782, in John Nichols, Literary Anecdotes of the Eighteenth Century, 9 vols. (London: printed for the author, 1812–15), VIII, p. 682. For the surviving drawings, see British Library, London, Add. Ms. 32467. On the project generally and Tillemans’ involvement more particularly, see Tony Brown and Glenn Foard, The Making of a County History: John Bridges’ Northamptonshire (Leicester: University of Leicester Press, 1994); and Bruce A. Bailey (ed.), Northamptonshire in the Early Eighteenth Century: The Drawings of Peter Tillemans and Others (Northampton: The Publications of the Northamptonshire Record Office, 1996).