Ann Payne traces the beginnings of the antiquarian tradition of recording and promoting history through topographical drawings in the British Library’s collections.

While Tudor Britain was being subjected to military surveys it also came under increasingly close topographical study of a non-military kind. In the wake of John Leland’s countrywide explorations of ‘things very memorable’ in his Itinerary of the 1530s and 1540s, educated Tudor gentlemen took to topography in some numbers. The best known work, Williams Camden’s Britannia (first published in 1586) covered the whole kingdom, but more often surveys did not reach beyond a single shire. Illustrations were little used in the printed texts until the beginning of the 17th century. Even before that time, however, the advance of topographical scrutiny in county surveys, heraldic visitations and local histories threw up a variety of pictorial material reflecting the interests of those who were undertaking the work: Roman antiquities, pedigrees, coats of arms, churches and their monuments, maps and charts.

From the papers of George Owen of Henllys (1552–1613), Welsh squire and historian of Pembrokeshire, comes the earliest known picture of the cathedral church of St David’s, drawn by Owen himself or by one of his servants; its plain and simple lines enlivened by heraldic decoration, a friendly sun and corkscrew clouds. 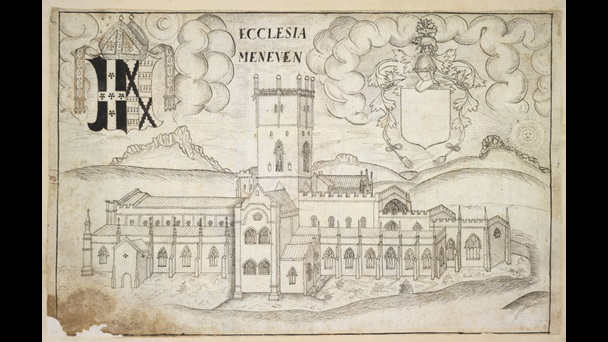 The earliest known drawing of St David's Cathedral, about 1585-86.

Much of the topographical work of the ‘learned & langwaged’ William Smith, a colourful figure who was in his time merchant, traveller, herald and cartographer – even for a while keeper of the Goose Inn in Nuremberg – concentrated on the County Palatine of Chester. But for ‘The Particular Description of England…1588’, which survives among the manuscripts of the Sloane collections, he casts his sights wider and illustrated the text with ‘portatures’ or picture maps of the chief cities of England. 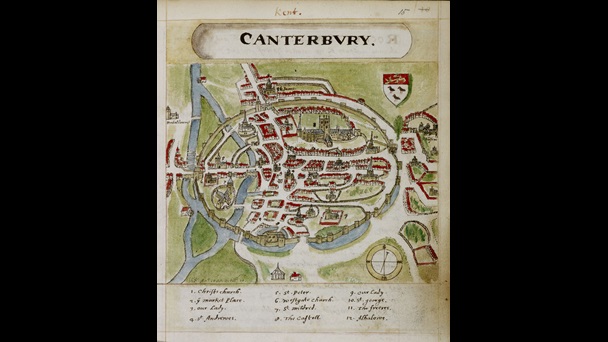 A 'portature' of Canterbury from William Smith's Particuler Description of England.

In similar style and colouring, though done in a surer hand, are the drawings by John Norden of the royal estates in Berkshire made for James I in 1607. His view of Windsor Castle has it laid out in the detailed aerial manner to be expected of a surveyor and proficient map-maker. Norden harboured a grandiose plan for a systematic set of illustrated county surveys to rival Camden’s Britannia and Saxton’s Atlas, but he lived to see only Middlesex and Hertfordshire in print. 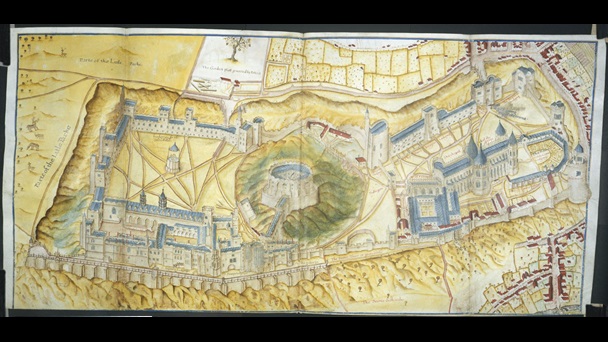 A detailed aerial view of Windsor Castle by the cartographer John Norden.

The engraver Daniel King was associated with the illustrations to a number of topographical works including the Vale Royall of England published in 1656. This featured a survey of Cheshire by William Smith and William Webb, and included also ‘An Excellent Discourse on the Isle of Man’. Daniel King’s drawings for the ‘Discourse’ are to be found in a sketchbook in the British Library collections. They are stiff, uncomplicated and uncoloured, as befitted work whose main function was a guide to the engraver. The addition of key-lettering confirms them as studies for the preparation of book illustration. In the opinion of one of his patrons, the distinguished antiquary and herald Sir William Dugdale, Daniel King was ‘a silly fellow…an arrant knave’. Certainly he is not noted for the accuracy of his records. Like other British artists of the mid-17th century, King was greatly influenced by the Bohemian Wenceslaus Hollar, a map draughtsman of quality, but more importantly a leading exponent of the continental import – ground level prospects and ‘landskips’.

Prospect of Bishopscourt, Isle of Man The sketchbook of Daniel King contains preparatory drawings for engravings, such as this view of Bishopscourt on the Isle of Man.

On 1 May 1638 William Dugdale joined three other antiquaries, Sir Christopher Hatton, Sir Edward Dering and Sir Thomas Shirley, in forming a society called ‘Antiquitas rediviva’ (Antiquity restored to life), with an ambitious programme of recording in words and pictures descriptions of medieval tombs, stained glad, manuscripts and armoury. One of the fruits of this association was the ‘Books of Monuments’. The work was an act of astonishing foresight in face of the threat of approaching Civil War. In the summers of 1640 and 1641 Dugdale took with him an illustrator named William Sedgwick and toured London and the Midlands describing and drawing monuments ‘to the end that the memory of them in case of that destruction then imminent might be better preserved for  future and better times’. The results are striking and contain a remarkable record of now-lost monumental art. Sedgwick may not have been the most exquisite of draughtsmen and his geometry and perspective were at times wayward, but his work is bold and colourful, and – a prerequisite in Dugdale’s antiquarian eye – functional. For his later great works, the Monasticon Anglicanum and his histories of Warwickshire and of St Paul’s, Dugdale employed the talents of Hollar. In almost every case the drawings illustrating his work are the earliest known of the buildings they record. 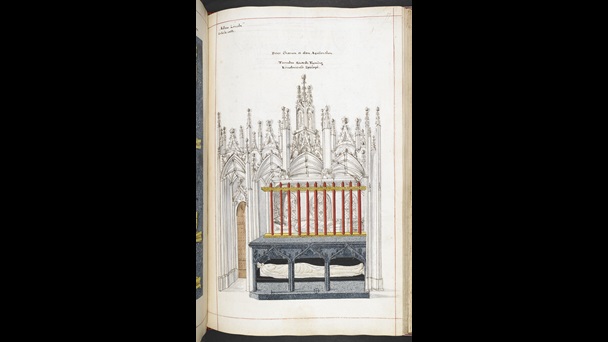 Sedgwick's drawings provide an invaluable record of many historical monuments that were destroyed during and after the British Civil Wars.

Though a recognisable enough figure in earlier times as a man who would go ‘forty miles to see a Saints well or ruin’d Abbey’, the antiquarian topographer enjoyed his real heyday in the 18th century. From 1717 the newly re-established Society of Antiquaries sponsored the publication of fine engravings and its members individually acted as enthusiastic patrons and collectors. The topographers par excellence who catered to this growing market of the learned and curious were the brothers Samuel and Nathaniel Buck.

The British Library possesses Samuel’s earliest surviving work, a sketchbook of his home county, Yorkshire, made on a series of tours between 1719 and 1723. These rough pen-and-ink sketches of country houses and town prospects were commissioned by John Warburton, excise man, antiquary and herald, whose grand scheme was to produce a county history of Yorkshire. Warburton’s project proved over-ambitious and came to nothing; but Samuel Buck was able to use his sketches in later enterprises and his notebook remains an invaluable architectural record. 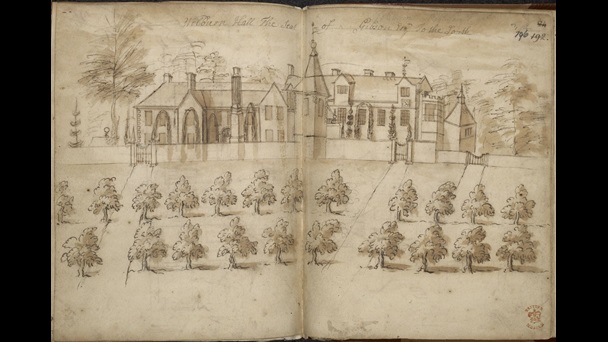 Between 1720 and 1753 the Buck brothers undertook a vast nationwide project to illustrate ‘the venerable remains of above 400 Castles, Monasteries, Palaces, etc, in England and Wales’. They also produced no less than 83 town prospects. In this they had the assistance of a number of other artists who were rather more skilful than they themselves. Summers were spent travelling and drawing, winter in engraving and spring in publishing. The works issued in this installment fashion were later published in collected form as Buck’s Antiquities (1774). Even today the engravings are among the best known of all topographical studies, familiar from modern reprints on sale at sites of historic monuments throughout Britain. As might be expected, the volumes of extra-illustrated county histories in the Library are plentifully supplied with Buck engravings. Less well known are the occasional preparatory drawings in ink and wash: the collection of illustrations to Hasted’s History of Kent, for example, includes drawings of Tunbridge Priory, and of the castles of Walmer, Saltwood and Leeds.

Buck’s Antiquities was one of the early symptoms of the ‘Gothic revival’ which was to spread through the country from the middle of the 18th century. Its effect was to convert public taste from the orderliness of classical balance and symmetry to the wild, the ruinous and the romantic, and it made its mark in all branches of art from painting to landscape gardening. Among the fashions it inevitably banished was the kind of estate portrait familiar from the engraved work of such men as the Dutchmen Leonard Knyff and Johannes Kip: comprehensive and formally-drawn picture maps, which give aerial prospects of the substance of a gentleman’s acres – his tidy house, his straight, level walks and his symmetrical gardens. A watercolour of Campden House in Gloucestershire by the English amateur William Hughes, done about 1750, is a naïve but pretty example of the style. This is a reconstruction by Hughes in 18th-century dress, for, while most of the other buildings still stand, the big house itself was in fact burned down by Royalists in 1645. New preferences rebelled not only against the formality of subject of such portraits but also against their ‘cartographic’ presentation: better now for the old manor house to be espied across picturesque parkland from between unregimented trees. This copy of a drawing of Campden House in Gloucestershire is in the style of Johannes Kip and Leonard Knyff.

The antiquarian topographers played a leading role in promoting ‘Gothic’ appeal. Conspicuous in their ranks were Captain Francis Grose of the Hampshire and Surrey Militias, for a time Richmond Herald (a rotund and jovial celebrity of the Society of Antiquaries whose popular Antiquities of England and Wales published between 1773 and 1787 was lavishly illustrated with the work of several  artists, including his own drawings and those of his valet Thomas Cocking); and John Carter, surveyor and architectural historian, whose conscientious study and hectoring championship of medieval buildings, helped to bring some historical sense into the muddled popular notion of ‘Gothic’. 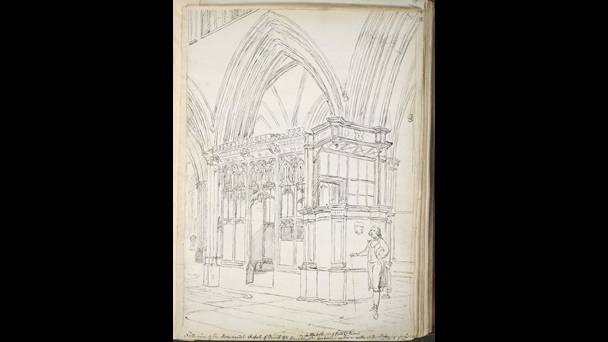 John Carter was a diligent and influential antiquarian whose work had a major impact on several artists and architects of the Victorian era.